Every week we send Brendan into the dark age of early access. This time, the old English village life of Sælig [Steam page]

Sælig, we are told at the beginning of this game, is an old English word that means “blessed, fortunate, prosperous, happy”. All fine goals in the harsh world of the dark ages, where the best you can hope for is a good fire and a full belly. But by the end of my brief time with this Anglo-Saxon household management sim, I would be none of these things. I would be “annoyed, discontent, bored, cheerless”. To keep up the old English, I would be wansælig.

The premise is great. You’re a townsperson in rustic 880s England. Starting with a bit of cash, you have to buy up a property and get the ball rolling for your future family. You can buy farms, bakehouses, mills and so on. Within these, you mush together ingredients made by other cottage industrialists and sell on the results for a profit. For instance, buying up the barley flour in the market and making some baps in your bakehouse for all the other peasants to eat. With extra money you can buy upgrades for your house or business, like extra storage space or the ability to hire extra workers. 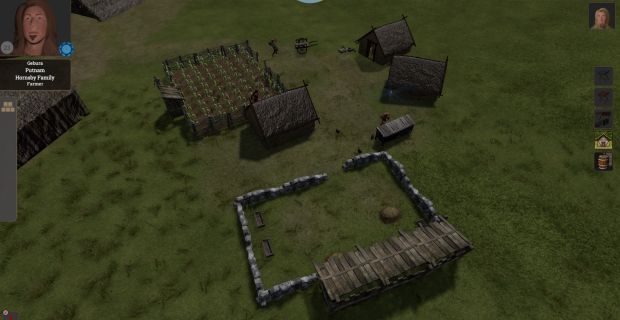 At the same time, you have to flirt and chat with people to get them to like you. A helpful tip during the tutorial explains the basics of human social interaction in a succinct and admirable way. 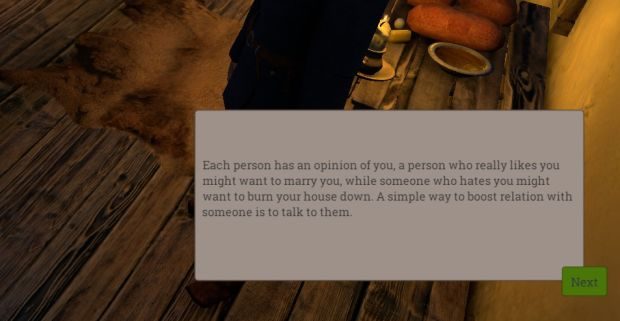 Eventually, you’ll be able to marry someone, have a child, and continue your family line. That’s the gist. Half of the game is about buying, producing and selling goods to line your pockets with coin. The other half is about walking around town and flirting with people incoherently until they want to make a little Aethalstan with you. To give you the horse cart pitch: it’s Banished meets The Sims. Or maybe it’s just The Guild But In 9th Century Wessex.

I was born into this world as Piddlewick Danglebrood, a fully-formed 19-year-old man with a full head of hair and a heavy purse, both were overflowing with gold. 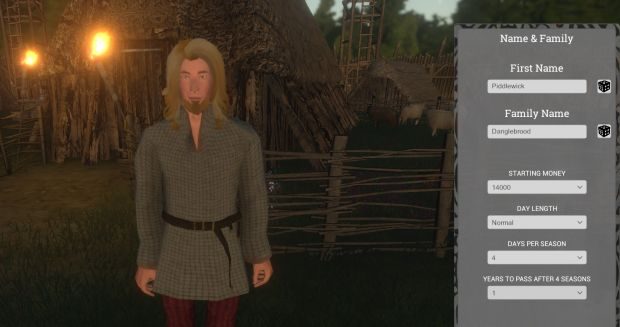 I had a house in the small settlement of Leeston. But I had dreams too. I bought an alehouse as soon as I found one, just a few doors away from my own threshold. It cost me 3000 gold and came with two workers from other families. Maida, who would become the designated wheelbarrow pusher, delivering barley and fruit from the market. And the 18 year old Rheged, who would be the brewer and chef. When barley ran low and ale wasn’t possible, he would make fish stew and porridge, according to whatever ingredients we could get. He didn’t do this automatically – you have to assign tasks and make sure workers have everything they need – but he did do it with a certain reliability. Unlike Maida, who had to be told to do everything with clicks and menus. Here she is standing at a merchant camp. Keep up the good work, Maida! 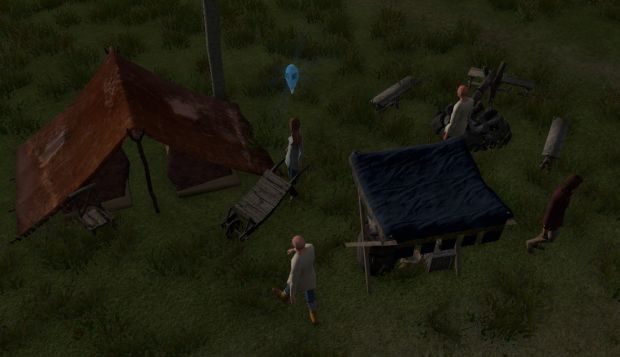 But once I’d set up the shop, and finally got used to navigating the cumbersome and ugly trade menus of the market, and the production menus of the alehouse, my boy Piddlewick didn’t really have much to do, aside from the occasional bout of apple-picking. 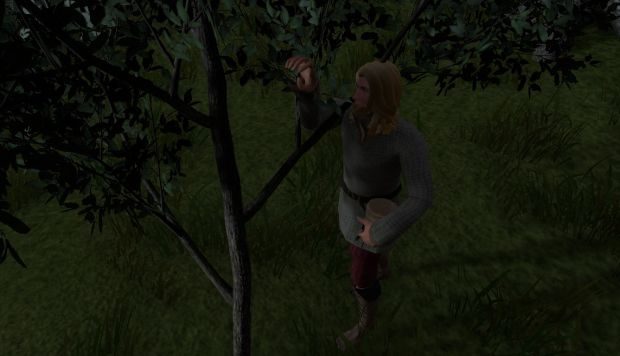 There are a few activities. You can move your character around and interact with certain objects or the environment in general. Right-click and you can order your property owner to “entertain”, whereupon they pull out an auld cruit and start stringing away to any passers-by, who sometimes stop and dance or give you a bit of coin. 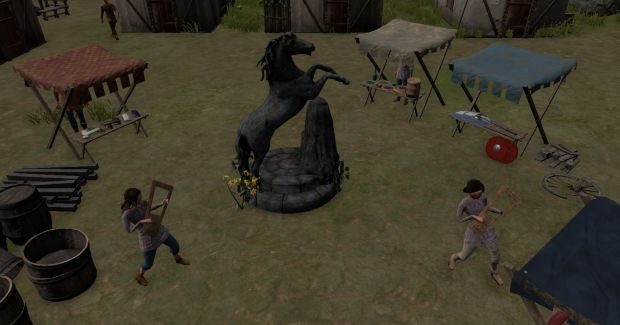 I decided that standing outside the inn or beside a fire in the evenings was a good way to get some money and catch the eyes of any ladies from wealthy families. I was looking for a farmer’s daughter. If I could somehow wrangle a patch of cropland, I’d have the production of my own barley and wouldn’t have to pay market prices. I flirted with all the farmers I could. Sometimes I went to their farms and serenaded them while they swung large scythes around in a vaguely threatening manner. The game does not recognise this as courtship. 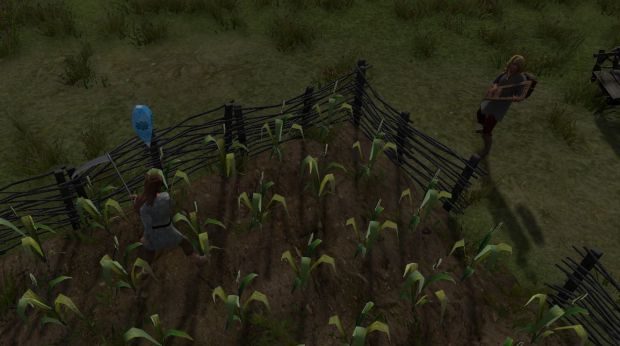 Unfortunately, it’s quite hard to tell who's who in a town where there are only about eight different faces and just as little variety in clothing. The old English names don’t help and niether does the “people” menu, which simply throws all the people you’ve met or clicked on into one giant box, arranged in a random order, and displayed without names until you hover your cursor over them. There’s no easy way to keep track of who you’re flirting with, or where they live, aside from following them around on the screen or navigating this massive box of generic visages every time you want to visit your beau. It’s like some kind of terrible dark age social media network. Facebox. 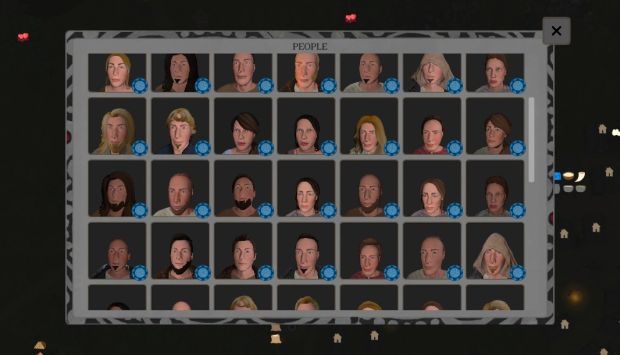 I quickly gave up on the idea of marriage and children. Piddlewick Danglebrood was still young, although perhaps not for 880 AD standards. Nevertheless, I decided to focus on the alehouse. I sent Maida the wheelbarrow girl (aged 47) to the next town over to fetch some honey for a brand new drink: mead. With enough horns of the good stuff, we’d be rolling in cash. But first I decided to invest in the building itself, buying up some of the upgrades – a brewing cellar already let me make the drinks, so I clicked on some extra shelving which suggested I would get more slots to hold more produce, allowing me to make food and drink at the same time. In reality, these upgrades seemed to do nothing. I had the same amount of slots as before, they just held a higher “stack” of items. This expensive investment did not help me much at all. But at least you can look into the alehouse and see people enjoying themselves.

Oh. They’re all stuck at the door. 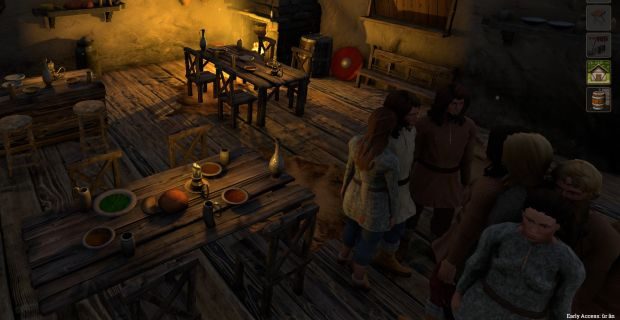 Except, of course, for the ones who break free of the crowd, walk straight into the fireplace, and disappear through the solid stone and fire, like phantoms. 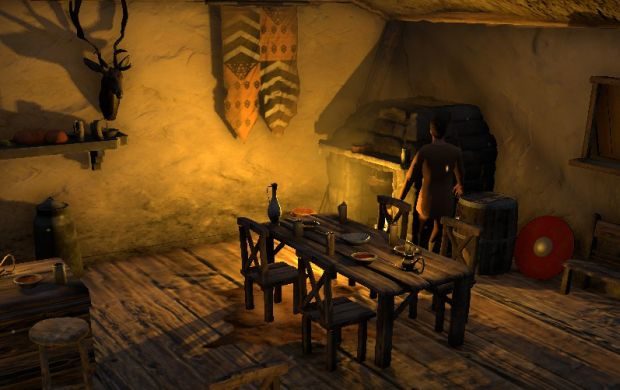 When Maida reached Norbury I went over to check on her. It turns out Norbury is massive, and much more impressive than our own small village of Leeston. It has walls and a church! 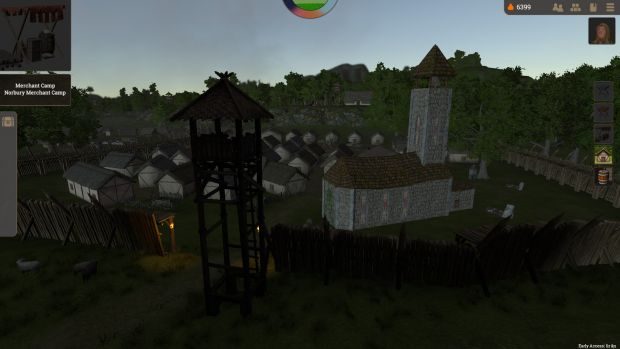 It also has a bigger market, but this didn’t seem to make much difference in terms of what was available. Honey was the only thing I couldn’t get at home, so Maida stocked up her wheelbarrow and trundled home in the dark, taking hours of in-game time to get back. Later, she would disappear from the alehouse (with no warning or pop-up from the game telling me so) possibly as some kind of protest but more likely because she wasn’t given any work to do. I had to rehire her and heed her invisible complaints. Don’t worry, Maida. From now on, we’ll make sure the wheelbarrow is kept moving at all times. Or maybe not, since that means physically clicking or arranging each journey every single time. 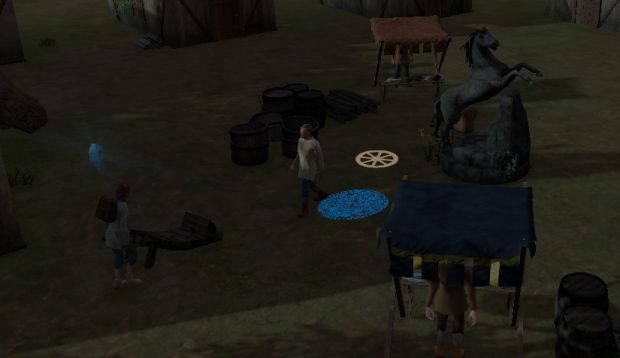 Again, once the machinery of the alehouse was working (as much as it could without my supervision) and the mead was flowing, it felt like the game was over. That this was all there was to life. Going to market, buying honey, buying barley, making mead, playing the cruit, watching the children dance, irritated that they never give you any coin. This same thing every day. And every night is cursed by a tedious unskippable darkness that makes everything hard to see or do (you can speed up time a little but that doesn't solve anything). There’s no means of holding a torch, like one of the town watchmen. There’s not even an option to turn up the brightness. In a way, Sælig is very successful in recreating the rural life of the bygone millennia: a life of drudgery. 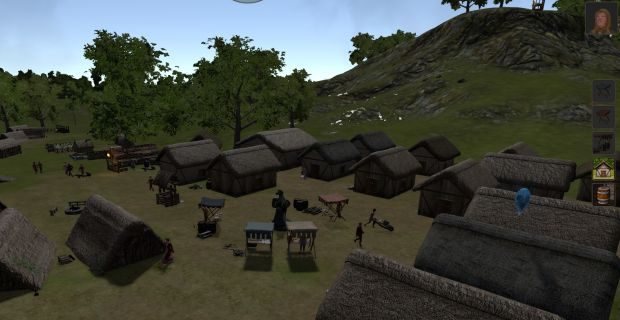 Aside from the interface, camera and controls being simply unpleasant to use (and frequently broken, taking away your ability to even move your character from place to place, for instance, or having menus disappear from sight) it’s just a bit of a chore to do anything at all. After trying and failing to live an interesting life as a trustworthy ale baron/musician, I fell into criminal acts, thinking that at least this would make for some interesting anecdotes. I went to a house and burglarised it using a “break in” option on the radial menu. 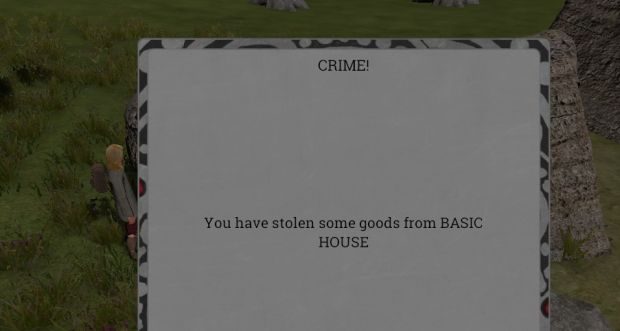 Later, I would try to break into the storage shack at the farm where my old flame lived, Agatha or Mildew or Bilgetooth or whatever the hell her name was. But I was caught by a dog, and then by a guard, who fined me 200 gold and then cowered and whimpered when I clicked on him and selected “Yell At”. 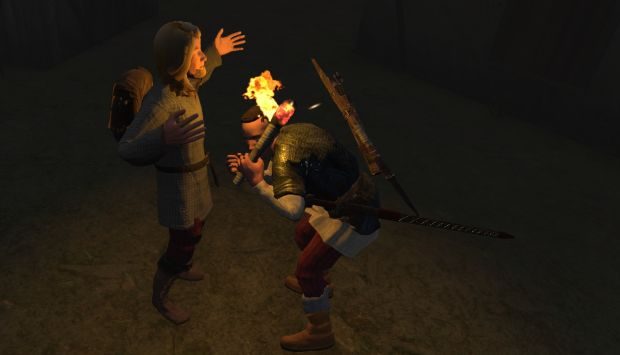 This life of thievery was absurd. But there was another crime to have a go at – arson (I knew this because I had seen this option on the radial menu too). I sent Piddlewick to Norbury, where two other alehouses resided, likely offering no competition to my own establishment because they were so far from my village. Nonetheless, I burned them down. 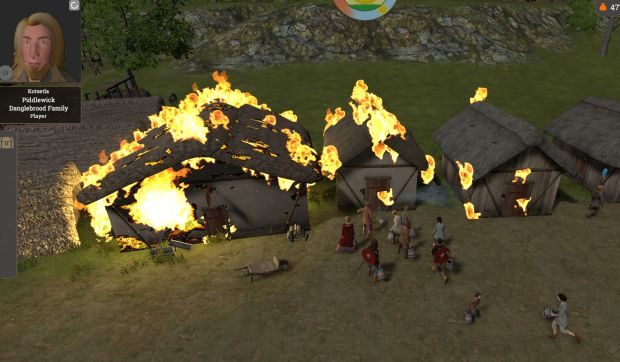 This involved not just one act of arson, but many. Because townspeople rush to a fire with buckets full of water and can put out a house-engulfing blaze with just three tiny buckets. This means you have to set the building on fire repeatedly in order to reduce it to rubble. I did this to both alehouses and was never interrupted or stopped by either guardsmen or locals, despite doing so in broad daylight. At one point several priests from the church walked past me as I handled an incriminating flame to the foundations of a building. They said nothing. 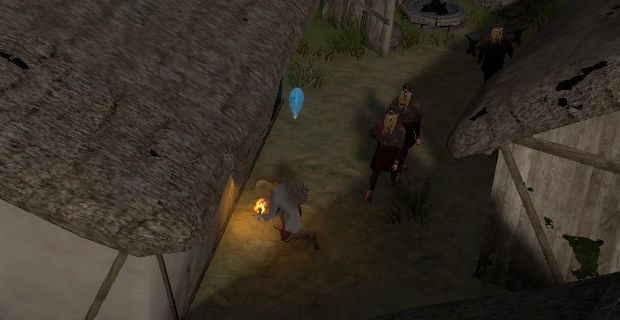 When the alehouses were dust I went back to Leeston and sat in our own tavern, which by virtue of being the only drinking establishment for miles, should soon be heaving with customers. This, alas, never came to pass. 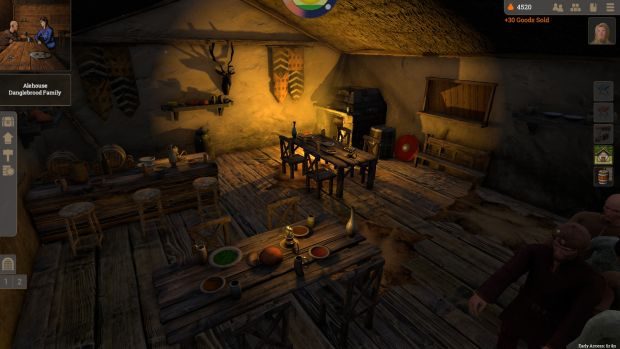 With that, and with the cursor no longer responding to my demands to move my character around, I gave up on the dark age dream. I sold the alehouse for over 4000 gold, more than I bought it for but probably less than I had invested in it by building the brewing cellar and extra shelves. Then I sold my house too, which had been good for nothing except keeping the dog dry. A dog that was only bought to guard the meat in my house from other petty thieves. He, at least, had been effective. Now all these beggars, thieves, minstrels and unemployed people simply rummaged around in the nearby chicken coop instead, robbing eggs from the family who lived there and walking away as if they’d done nothing wrong. 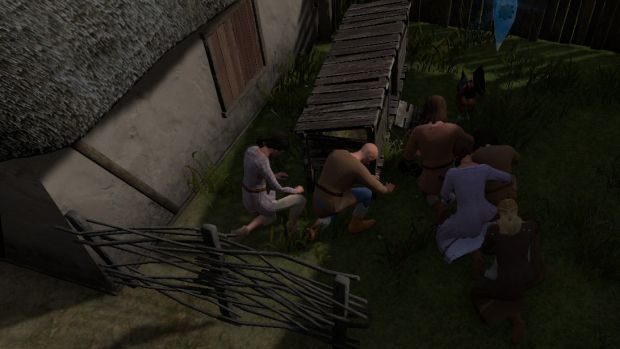 I looked at my balance and waited for the money from my property sales to arrive. It never did. I briefly considered setting my own alehouse on fire. But then I remembered how many times I would have to do that. Instead, I turned the game off. It was a quicker way of erasing the tavern and all its patrons from existence.

That was the end of my misadventures in Leeston. From the small amount of time I could manage, I found Sælig to be ponderous, clunky, aimless and labourious - nowhere near ready for even the dark age market of early access. The premise and setting is good - the horse cart pitch - and I can always see potential in a game where half the population are robbing their neighbour's free range eggs. But at the moment, it is all bones, impossible to recommend. There's probably more meat in my dodgy alehouse's stew.