Why aren't more gaming monitors like the Samsung Space monitor? If there's one thing I've come to loathe about some of our jumbo best gaming monitor picks, it's their desk-hogging stands. Some monitors I tested last year practically demanded their own table, their stands were so enormous, while others barely left enough room for my keyboard and mouse mat.

Not so with the Samsung Space. This 32in 4K monitor is an absolute beauty. Thanks to a clever clamp design that fixes the monitor to the very back of your desk, the Samsung Space can be pressed right up against the wall, giving you acres of room for your mouse and keyboard, or in my case, seven hundred graphics card boxes and various bits of testing equipment. And the best part? Its VA panel is practically perfect straight out of the box. Here's wot I think.

I should stress, the Samsung Space isn't really a monitor that's built for gaming per se. The model I was sent for review (the S32R750) is just a regular 32in, 3840x2160 VA panel with a 60Hz refresh rate. There's no AMD FreeSync or adaptive sync support for tear-free gaming, for example, and while there is a so-called 'Game Mode' in the sparse onboard menu settings, all it seems to do is make the screen brighter.

The Space is also available in a smaller 27in model (the S27R750), which has a 2560x1440 resolution and a 144Hz refresh rate, but once again this is a FreeSync-free zone (or at least it is out of the box. Readers have since informed me that updating the firmware will make FreeSync available as an option, but I had already sent my review sample back to Samsung before I could try this for myself to see if the same thing worked on the 32in model). That's not to say you shouldn't consider the Samsung Space for your next monitor, though. I had a perfectly decent time playing games on the 32in Space, and didn't notice any screen tearing or stutter or any of the other visual defects that can sometimes appear when you've only got a game's V-Sync settings at your disposal. 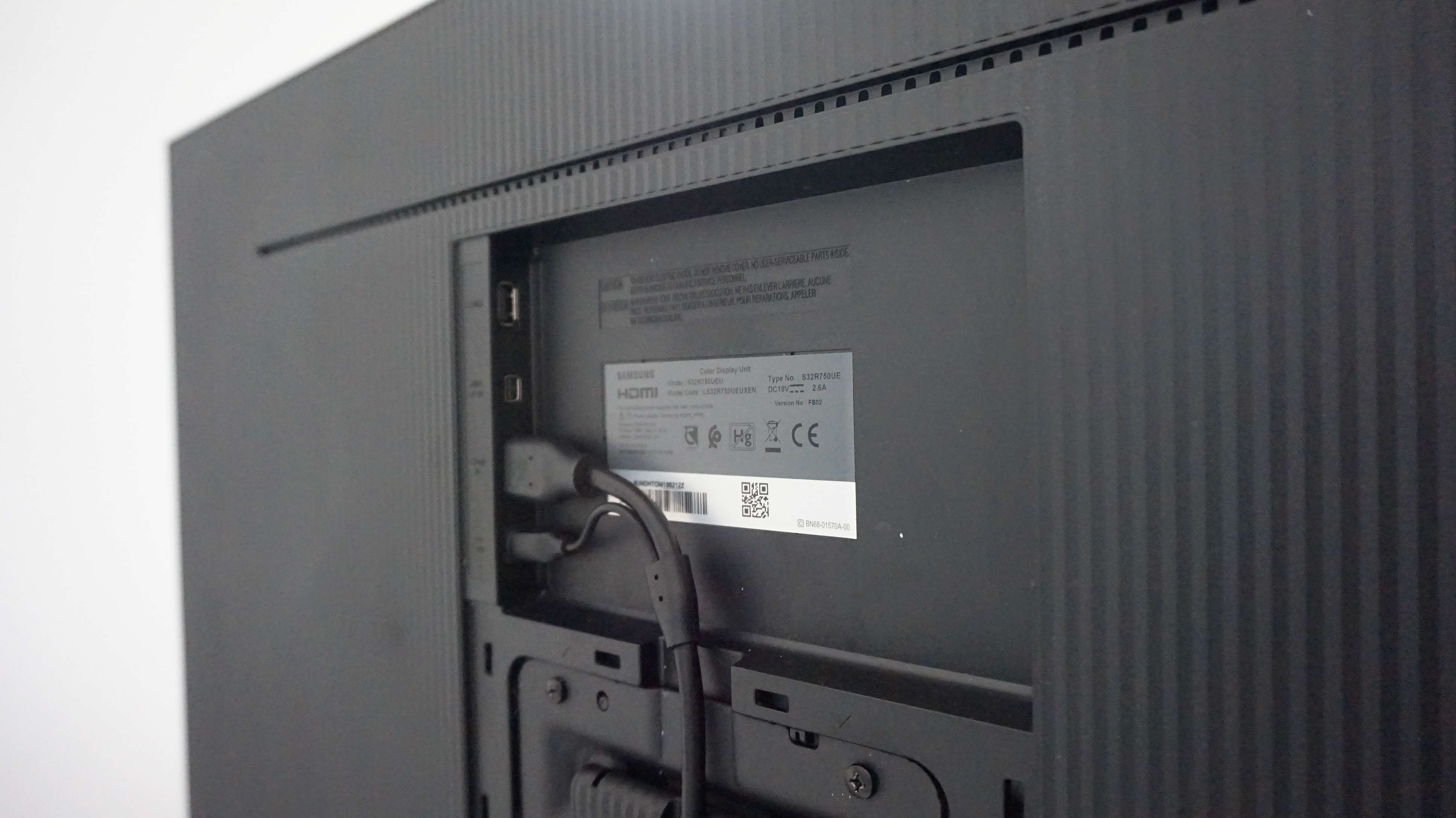 Besides, just look at all that spaaaaaaaaaace. It's beautiful. Plus, it didn't really take that long to set up, either. Once I'd pulled my table out enough to fit the stand clamp down the back of it, all I had to do was twist the clamp into place (and with 90mm of adjustable available, it should be able to accommodate most table thicknesses, too). After that, the monitor felt sturdy and secure, and I was able to use its hinge to pull it down and push it back up again without worrying about whether it would come crashing down on me. What's more, there are grooves down the back of the stand to hide the Space's combined power and HDMI cable (and another one for its miniDisplayPort if you want to attach another device like a laptop, for example), which helps to keep things extra tidy.

The only slight niggle I have with the Space monitor is the fact I couldn't adjust the height of it without bending its hinge forward. For me, it was just a smidge too high when I had it flat against the wall and I felt like I was constantly peering up at it rather than looking at it straight on. Of course, at 5ft 6in, I'm hardly the tallest person out there, and this may be less of a problem for those less vertically challenged.

Still, in my case, I had to bring the Space forward before it was the correct height, at which point it was far enough away from the wall that it just felt like I had a normal monitor with a regular stand on my desk. However, I realise there's probably a bit of a trade-off going on here, as I just don't think it's physically possible to have a traditional height-adjustable spring mechanism on a stand this thin (not to mention it would play havoc with those cable management grooves as well). I'm no engineer, but I don't think the Space would be nearly as attractive if it had a thicker stand, nor would it be able to sit so flat against the wall.

Some might say that's putting form above function, but for me it's a niggle I'm willing to live with. Yes, it might feel like I've got a normal monitor on my desk for most of the time I'm using it, but I do appreciate being able to push it back once I've finished using my PC for the day and still having all that space available for other things. I like having a big, clean desk, me, and the Samsung Space finally means I can use it for something other than playing games.

Of course, all this would mean nothing if the Samsung Space's VA panel wasn't any good, but I'm pleased to report that it's more than just "good". It's brilliant. When I stuck my X-Rite i1 DisplayPro colour calibrator on it, for example, it came back with an outstanding sRGB colour gamut coverage reading of 99.8% on its default colour tone settings, so you won't have to waste any time fiddling about with its menu settings before you get a good picture.

Likewise, with a peak brightness of around 350cd/m2, the Space gives you plenty of brightness to work with for all kinds of lighting conditions, and it does so without compromising its black levels, too. Even when the monitor was pumping out its highest brightness level, its blacks remained at an impressively low 0.15cd/m2 (the closer to 0.00cd/m2, the better), ensuring deep, inky shadows and crisp-looking text. Throw in a lovely high contrast ratio of 2230:1 and the Samsung Space really doesn't disappoint when it comes to overall picture quality. 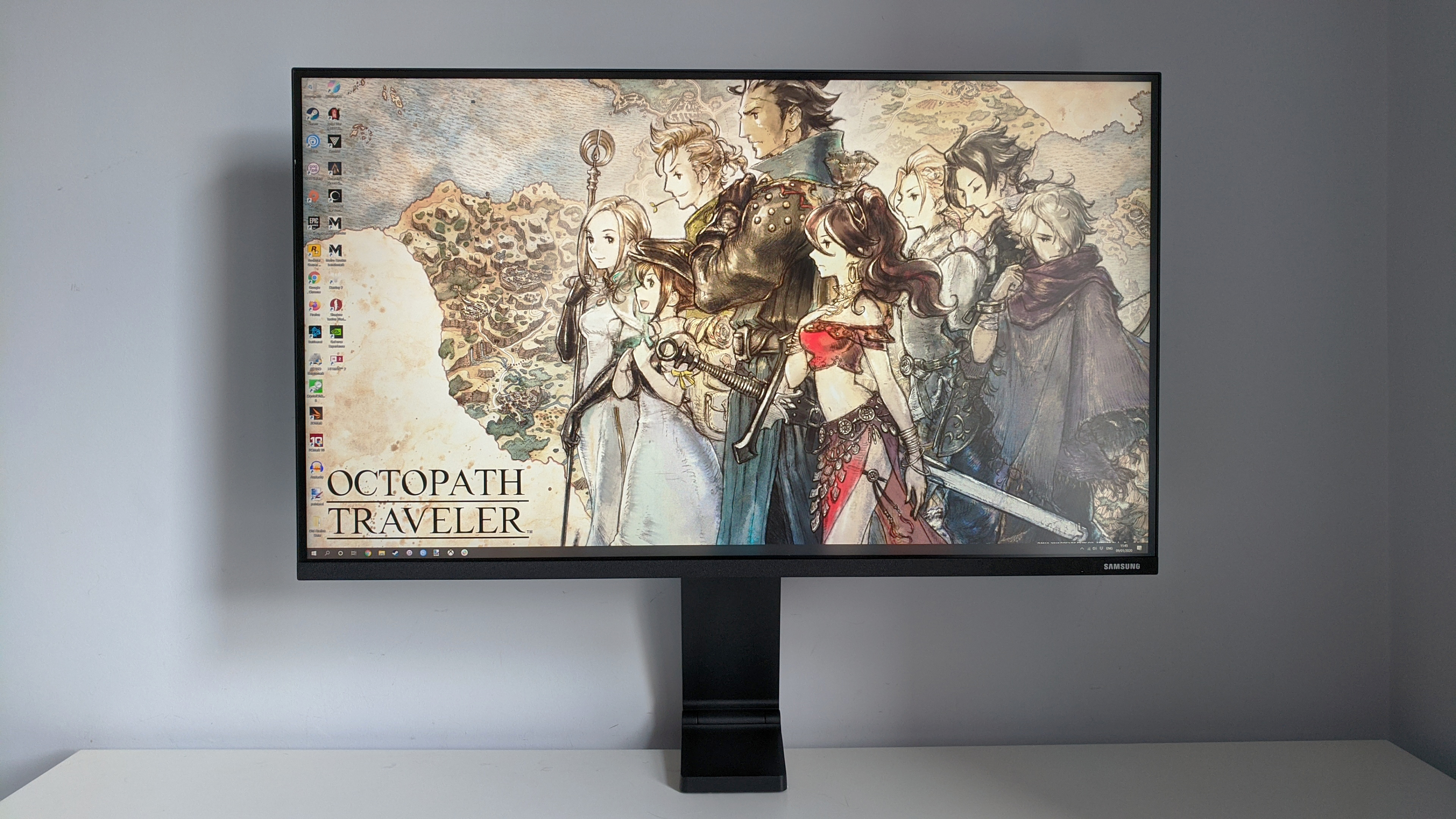 The best thing about the Samsung Space, though, is the price. I was expecting this kind of fancy engineering to cost an absolute fortune when combined with such a large 32in panel, but this 4K monitor can be found for just £330 / $370 at time of writing, which is a great price for such a superb 4K monitor, let alone one with such a space-saving stand. What's more, the smaller 27in version is currently available for an even more agreeable £250 / $300, which is another great value proposition for those after an inexpensive but highly colour accurate 1440p display with a high refresh rate.

Is the 32in Samsung Space worth buying over our current budget 4K gaming monitor recommendation monitor, the £248 / $293 BenQ EL2870U, though? In many ways, yes. The Samsung Space has a more accurate panel, and its design is much sleeker and more modern-looking than the comparatively chunky bezels and fixed stand of the BenQ. However, the BenQ comes with AMD FreeSync support, has a wider range of ports (although still no USB ports, I should note) and does a little bit of HDR as well, which some may value more than what the Space has to offer. Personally, I'd probably spend that little bit extra and go with Samsung's larger Space monitor, if only so I could reclaim some of my desk back again when I'm not playing games. It's by no means perfect, but for those after a great-looking 4K monitor that doesn't dominate your desk, the Samsung Space comes highly recommended.