Satisfactory, the Factorio-style automated building game from Coffee Stain, is going to be huge. It's going to be huge because there are going to be so many videos of huge things built within it, and we're all going to look at those and think "now I want to make something huge."

The overriding question here was always whether or not Satisfactory could successfully transpose the spaghetti junction of autonomous conveyor belts and heavy machinery traditionally beheld from a top-down, third-person perspective into shiny first-person 3D. How can one possibly manage these thumping, churning cat's cradles when even a small fraction of one fills the screen entirely?

Before playing the thing myself, a couple of Coffee Stainers demonstrated the sort of Satisfactories we can expect to see many hours into a game. My head span as they darted effortlessly, aided by jetpack, jumpads and buggies, around these shopping centre-sized constructions, these vast multi-storey car parks of industry, multi-tier conveyor belts as far as the eye can see, higher up than the neck can crane. Meanwhile, robo-buggies carried distant resources along minutes-long programmed routes, stopping to recharge themselves from generators when required -- gleaming ants, tireless, relentless. Someone, somehow had built all this.

Even more incredibly, someone, somehow, understood all this, at a glance. Over the space of dozens of hours, they'd mind-mapped where everything was, what it was connected to, what part in the almighty process of generating thousands of parts it played. To me it was an impossible maze of smoke-belching steel, the purest chaos. I politely asked questions, and silently freaked out. 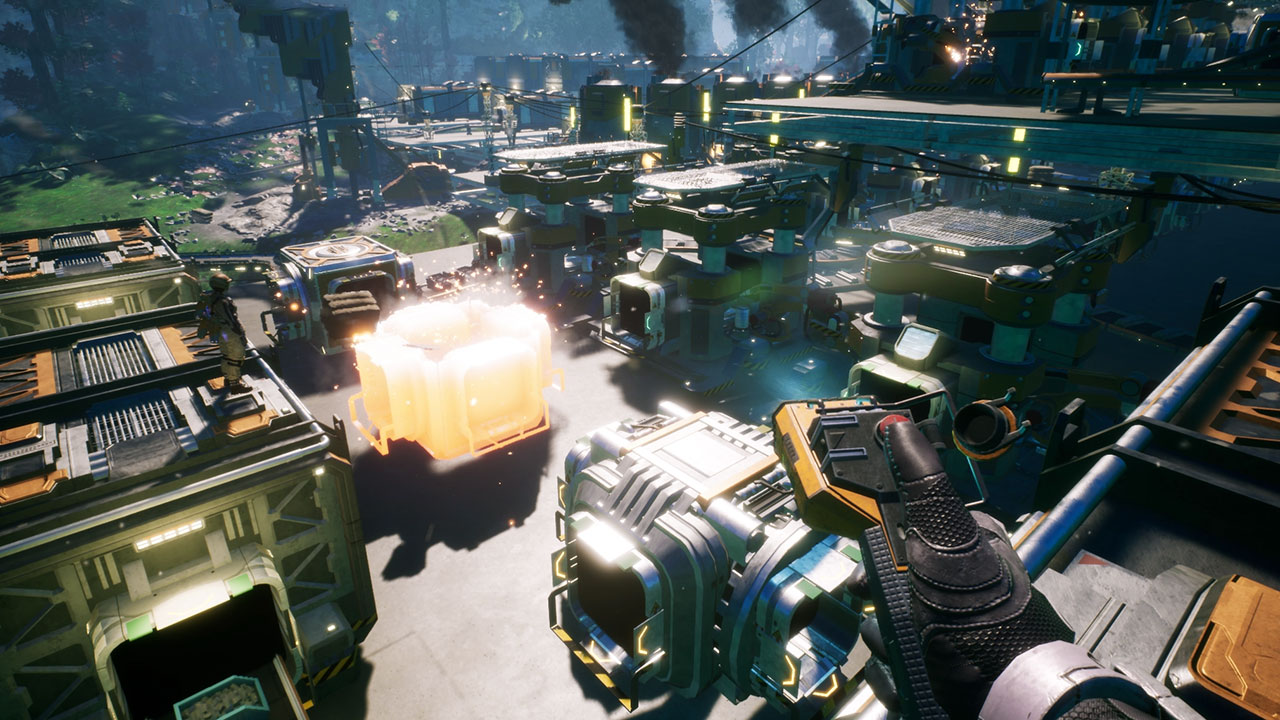 A few hours of play in an all-too-fleeting Test Weekend myself later and, though I'm nowhere near the extremes of what they showed me, I can now see how it all becomes possible. I have transformed my little patch of alien land into a hive of self-maintained industry. I have progressed from hitting a rock with a stick to gain a handful of ore to river-long stretches of the stuff ferried across the land to be merrily smelted and shaped into plates and bars. And, the thing that had felt truly impossible from outside, I remember what everything is, where everything is, though even a small fraction of my thumping, churning cat's cradle fills the screen entirely.

Whether it's a miracle of interface design or I'm just not giving the human brain's mastery of memory due credit, I'm floored by how manageable Satisfactory makes the truly mammoth. The earliest hours of the game involve relatively long and danger-strewn trips to collect far-off resources. I felt lost and miles from safety every time. But by now everything I currently need is ferried straight to my base, distant mining machines doing all the hard graft for me, miles-long belts transporting the fruits of their labour to the smelters and builders that are the ventricles of my base's colossal heart.

To play Satisfactory is to generally be lost in the moment, to forever chase the next new technology, but step back and take in the scale of it and the only apposite word is 'awe.' 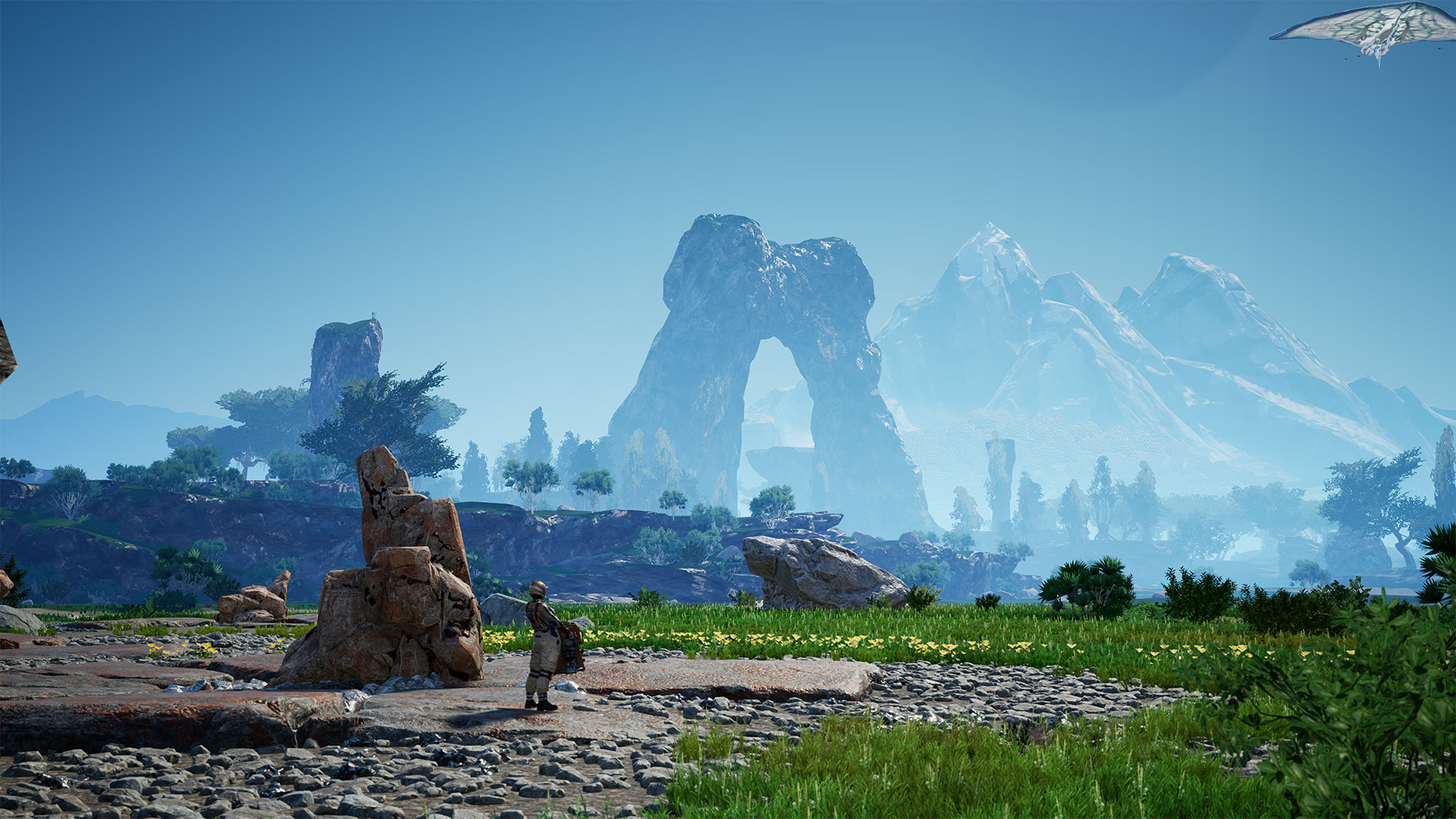 Remarkably, that can be said not just of the machines, but also of the land you build them on. Fairly unusually for a post-Minecraft building game, Satisfactory's 30 km2 world is not procedurally-generated, but instead hand-crafted. There's clearly much to be said for the different-every-time experience, but this is place meant to be special, not merely adequate.

It is genuinely beautiful, which is a rare thing to say of a game about heavy industry. From the sky-high rock arches to gently lapping waves, to jungle trails to giant flying manta-creatures overhead, from a full day-night cycle to the hulking, harmless silhouette of a creature I can only describe as Sad Giant Testicle Cow, it's been a wonderful place to explore. 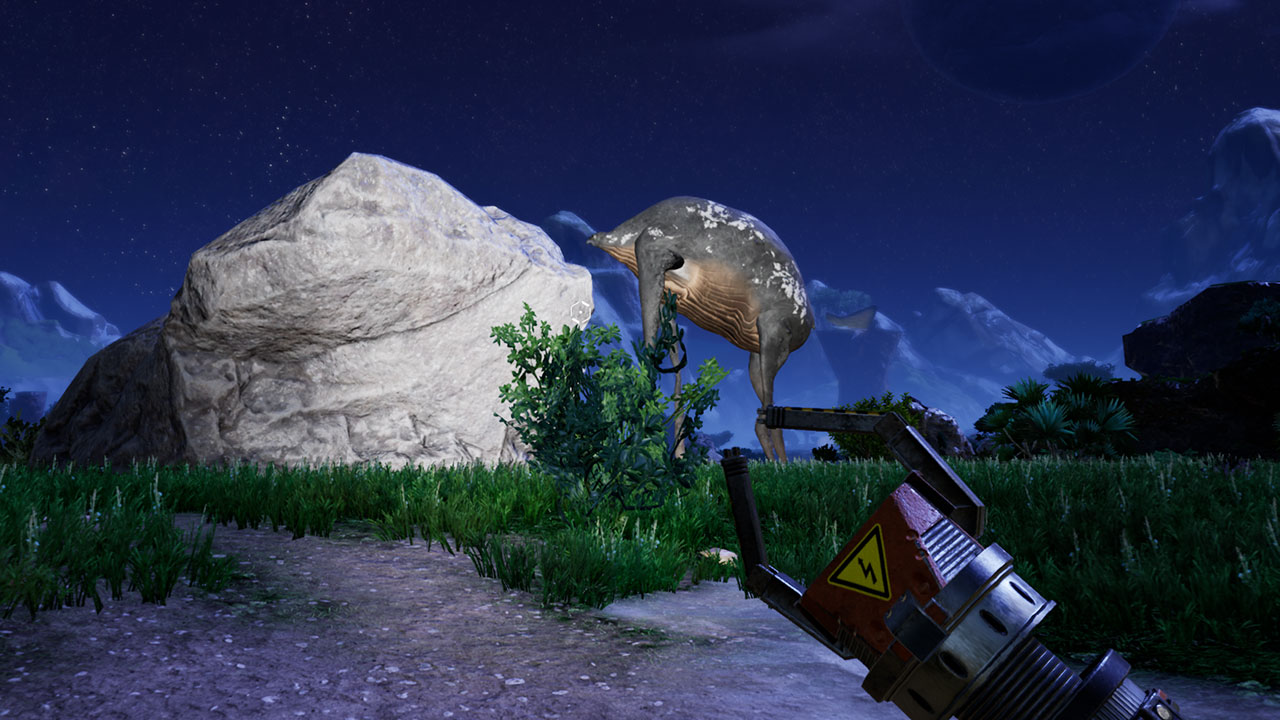 And, er, a wonderful place to fill with coal burners and ore smelters and myriad other ways to turn the azure skies a malevolent grey. (There are no environmental consequences, nor any message, but I felt an occasional guilty knot in my stomach upon returning to base from my travels, to be greeted by the startling juxtaposition of unspoilt alien paradise and fume-spewing production line).

Satsifactory makes a few feints towards survival game. There is some rogue wildlife to contend with (including giant spiders - for the arachno-shy, there's a UI option to replace these with images of one of the artists' cat), and death carries the familiar consequence of having to retrace steps to where you met your end if you wish to retrieve anything you were carrying at the time. Really though, this is just a bit of spice: outside of the hand-to-mouth first couple of hours and a few rarer alien wotsits used to research new unlocks, your machines are generally churning out far more resources than you'd ever have stuffed in your pockets.

Even the light-touch story veers carefully away from the trad. "you have crash-landed on a hostile planet" narrative. Instead, you're an employee of an almost certainly skeezy corporation known as Ficsit, who've drop-podded you down here to build some mega-tech for them - beginning with an enormous space elevator. However, I'm reassured that the story is "supplementary" rather than getting underfoot, and my half-dozen hours with the beta build bear that out. 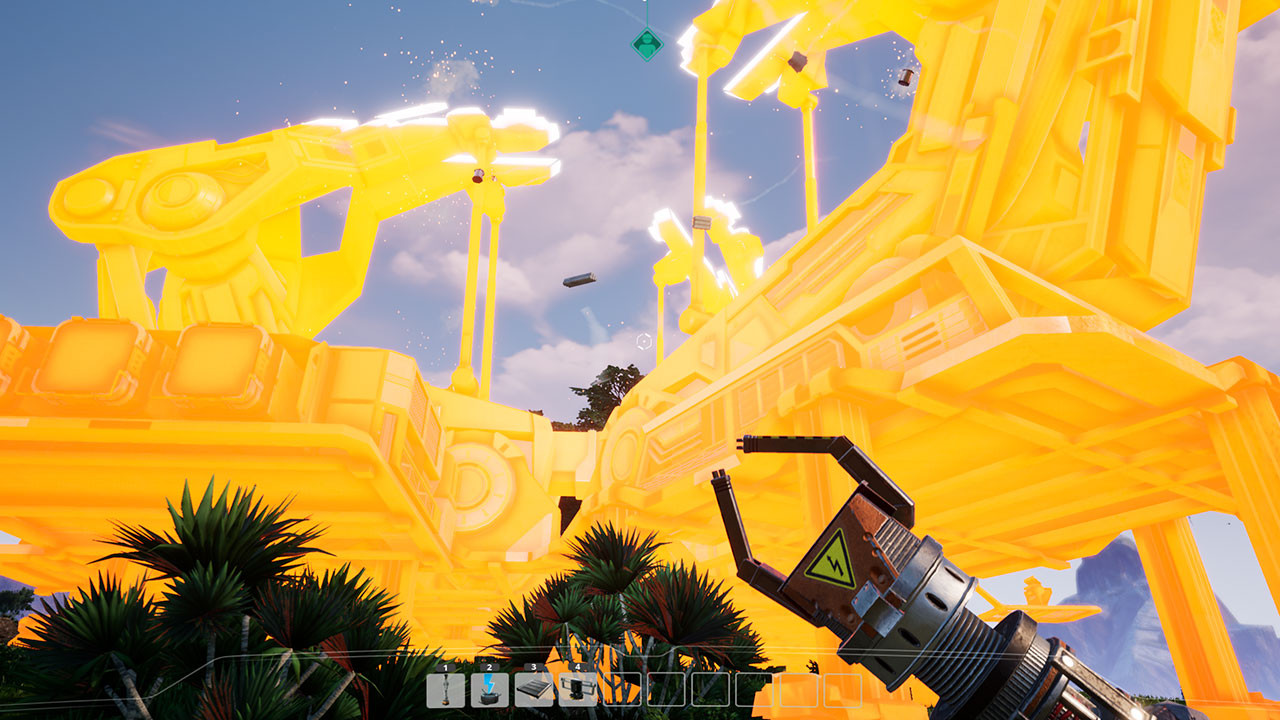 I do have a slight concern that the drive to build, expand, and again, and again could fade over time. I hit a point where I'd created a factory with a basic level of autonomy, churning out all the iron bars, copper wire and concrete slabs required for the most immediate constructions, and the prospect of stepping it up, further layers of spaghetti-strata mixing components into reinforced plates and rotors, and all the diligent connecting of power lines that entailed, felt exhausting.

I'm sure, once I was in the thick of getting there, the itch to get the job done would be overwhelming, but I think that sense of fleeting weariness is a by-product of the shift in perspective. Top-down and third-person, it's ever so quick to lay out conveyor belts and get machine placement just so, but running around the world on foot and fiddling to fit new constructions into a 3D space is definitely more time-consuming -- even though Satisfactory's hyper-polished interface has made it as smooth as it could feasibly be.

Of course, it may simply be that I lack either the dedication or the imagination of those players who will max-out Satisfactory's possibilities. As with any other building game of note, there are a golden few who can make it do the seemingly impossible. Gesturing at the aforementioned sky-high rock arch during the demo, the devs revealed that, to their delighted surprised, one test player had built a spiral array of conveyor belts around and up it, then built a factory on top. Another, Discord user 'Blanket Man', had built a factory shaped like a titanic hourglass: 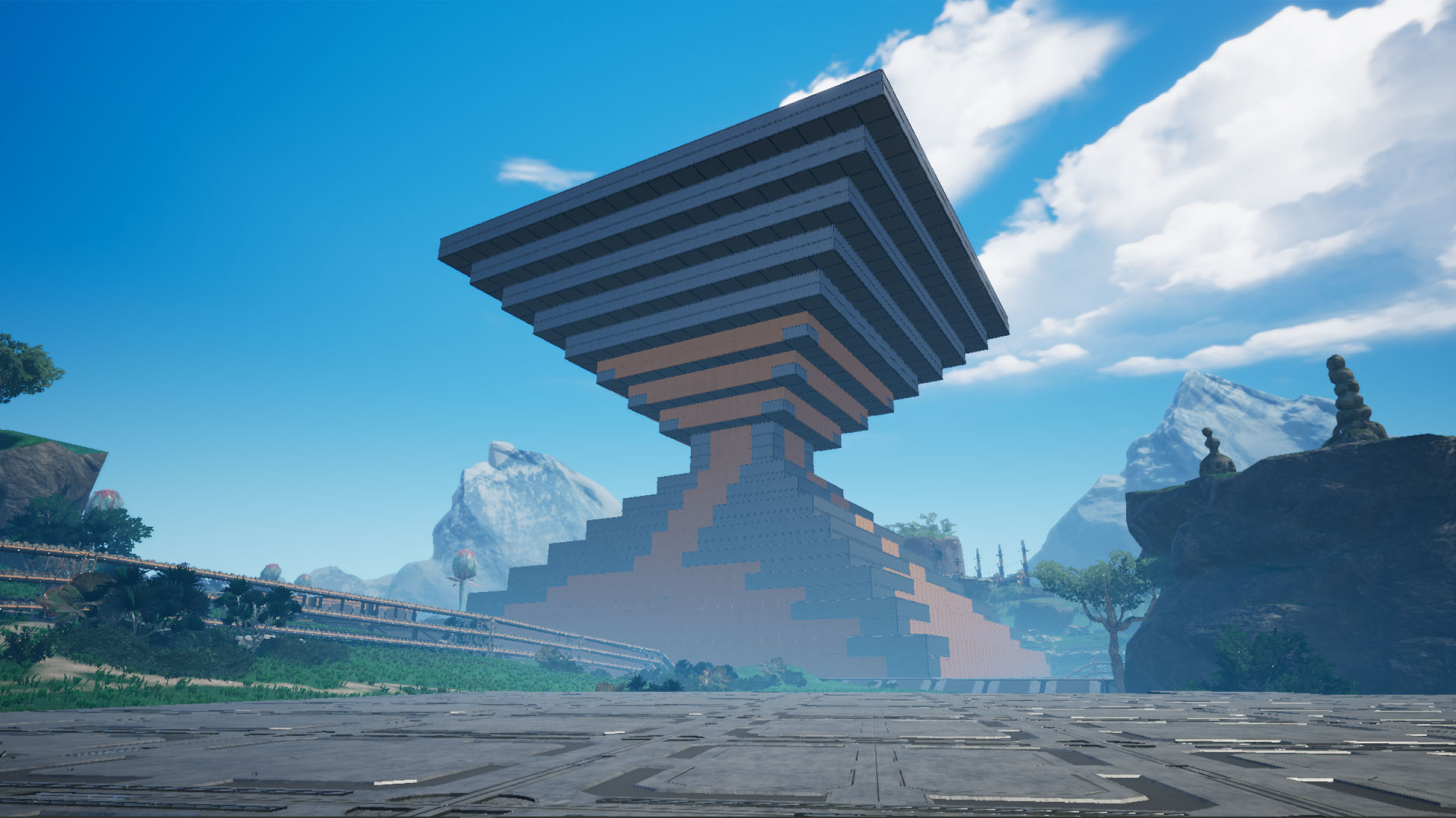 Verticality, something not really on offer in Factorio (though it is in that other close kin, Infinifactory) is the game-changer here. The limit of building height is apparently the skybox itself. There was giddy talk of players building towering platforms from which they could then jetpack onto the backs of the immense flying manta creatures.

Satisfactory feels, in so many ways like that, like a game made for streaming and boggle-eyed YouTube clips. Even the multiplayer, nominally up to four player but which will apparently support many more, albeit with no promises that things won't fall apart, feels like a gift to lunatic clip-making. But as a solo, ponderous and messy sort of builder myself, I was glad to find that the route up the tech tree was well-judged (at least for those first six hours). I derived immense satisfaction from simply getting a little (i.e. about half a mile long, with half a dozen circus tent-sized structures) circuit of iron mining and smelting established, rather than feeling disappointed because I'd barely scratched the surface of possibility.

What I did feel disappointed by was the closed beta slamming to a close yesterday. My beautiful machines, locked away from me, perhaps lost forever. Will they still be there, when the early access version of Satisfactory launches via the Epic Games Store -- which, going on the beta, certainly doesn't feel early access, even if not all the techs and narrative is there yet -- launches on March 19? It doesn't matter. I'll do it all again happily. Satisfactory is, I am quite sure, going to be huge.