One Finger Death Punch is one of the most satisfying games ever made. It's a brawler in which one button attacks enemies to your left, and another attacks enemies to your right. With these simple controls, you tap-tap-tap your way through approaching waves of enemies while your stickman protagonist spins, kicks, punches and slices away in the center of the screen. You slip into a flow state of comfy destruction, and then it starts to cannily layer new things into the mix that require your attention. There are enemies that require multiple taps, then enemies that must be tapped in a certain order, then projectiles that must be tapped out of the air, and so on. It gradually extends your reflexive ability to respond to the chaos on screen, until you enter into a state of hyper-awareness. After this, returning to levels that seemed frantic an hour ago reveals them to be plodding bores. They are beneath you.

This is a post about Skybolt Zack though, which is not one of the most satisfying games ever made. I still think it might be quite good, however. But only if you're better than me at games.

Skybolt Zack is a side-scrolling rhythm platformer in which, like in OFDP, you zoom between enemies with colour-coordinated taps. Zoom and bash red enemies with B, blue enemies with X, and yellow enemies with Y. You can also run and jump and air-dash, like in any other platformer, but walking along the ground feels like a kind of failure in this game. Instead, you want to zip across levels in mid-air, by shooping between enemies, projectiles, doors, jump pads and other items in the environment. The very earliest levels are instantly rewarding to complete, and it feels wonderful to use a swarm of onrushing missiles as an explosive staircase, tap-tap-tapping between them to propel yourself a hundred feet forward. 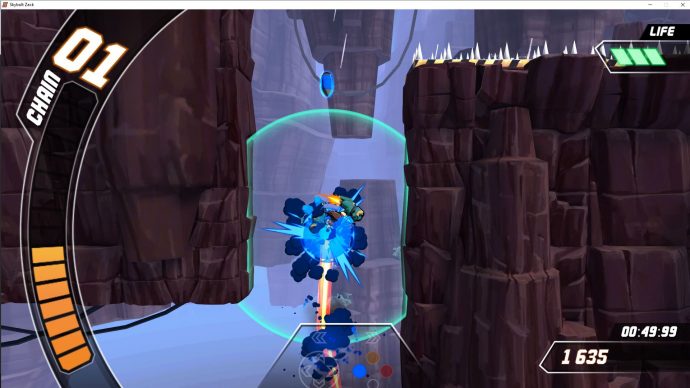 It doesn't let you bask in that satisfying feeling for long, though. The complications come thick and fast: objects that must be attacked from a certain angle, objects suspended above spike traps, objects that reveal a second object of a different colour after the first attack, and more. The game already asks more of you than OFDP by dint of its genre. It is harder to urgently parse what's in front of you when your character is not stood on a level plane, but instead zooming up and down and across a platformer level. It asks all this of you much more quickly than OFDP does, too, as it introduces these complications so much more swiftly.

Most of my favourite platformers encourage you to complete their levels in one graceful, continuous motion, like pulling your trousers, pants and socks off in a single act of hooked thumbs. Notably, mind, most of my favourite platformers don't require such precision from me. They're happy enough for me to trip over a trouser leg as long as the end result is the same. Skybolt Zack isn't so forgiving. Within the first hour of play, I was showing it my whole ass, but only in the sense that its levels were killing me again and again.

A different person might relish this challenge, but that's not how I'm wired. I want to feel good without technically having to get good, and all signs suggest Skybolt Zack keeps getting harder and more demanding - when what I really want is to turn failure states off entirely. That's how I play a lot of other rhythm games, such as Guitar Hero, but it doesn't appear to be an option here. (Though to its credit the game does have a handful of accessibility options that might benefit the colour blind.)

If you think you're that different person who might be driven forward by Skybolt Zack's challenge, check out the stream below in which RPS video bud Matthew plays the game with the developers at EGX Berlin. The game starts at the 1:53:33 mark: