It's been six weeks since I started my space empire. I've gone from the one-thousand-and-somethingth strongest player to an agonising 102nd. My territory spans nine space stations and two sectors, my ships number in the tens of thousands, and I have put enough of my spare (spare!) resources into an alliance project to start building a Dyson sphere.

Yet somehow, I don't really know what I'm doing.

Starborne is an odd thing. It's currently in alpha but its overall frame seems to be in place, and I don't know what to compare it to that won't feel a bit wrong. There's a bit of EVE Online and a bit of Neptune's Pride to it, but not exactly. My experiences so far have been positive, but I don't know how typical they are. I don't know if there even is a typical experience for most players. 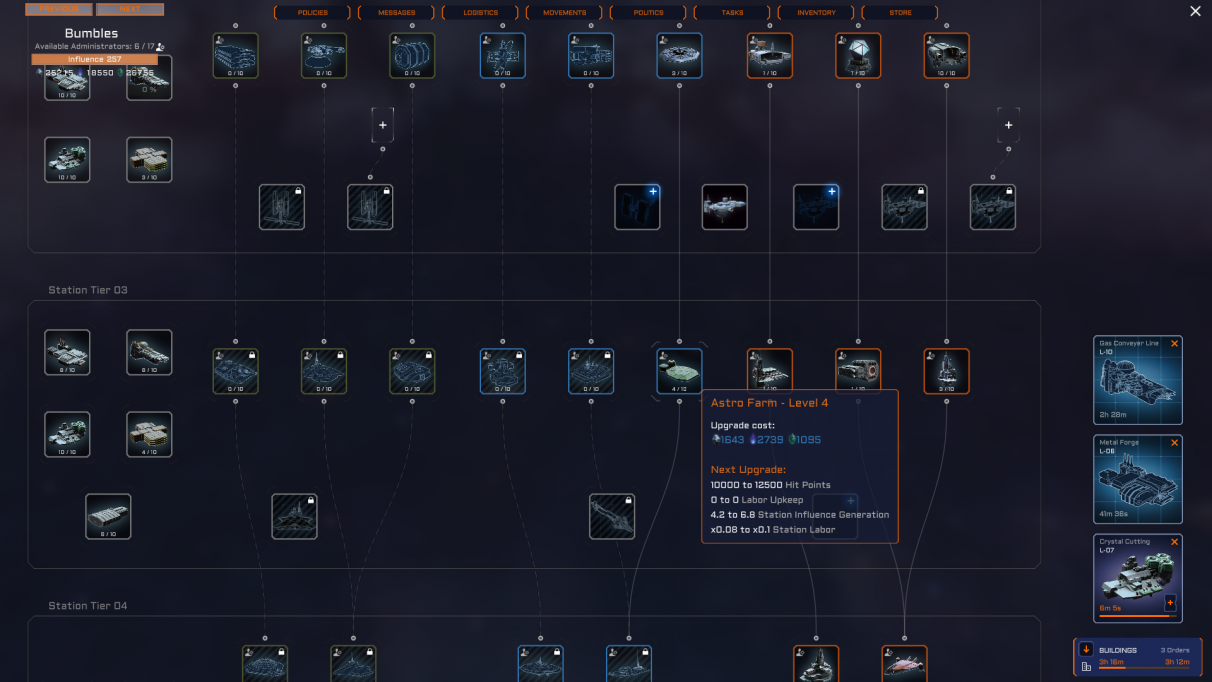 Let's give it some shape before we colour it in. About 4,000 players get a station each somewhere on a flat plane of hexy space. Planets, asteroid and ice belts within your station's territory automatically deliver a constant trickle of resources, which you turn into ships and buildings that offer bonuses and abilities to that station and your empire at large. With a fleet or two sorted, you'll want to attack nearby NPC bandit stations to liberate their resources too. Eventually you'll be able to build more stations and ultimately, once ten days of enforced non-aggression are over, you'll start suggestively sharpening knives at your human neighbours.

All this happens in real-time. Real real-time. Buildings take anywhere between two minutes and 18 hours to complete (although the vast majority take under two hours), and fleet movements can take a couple of days at the extreme ends. Games last for about two months, although most players will either drop out or lose long before then. 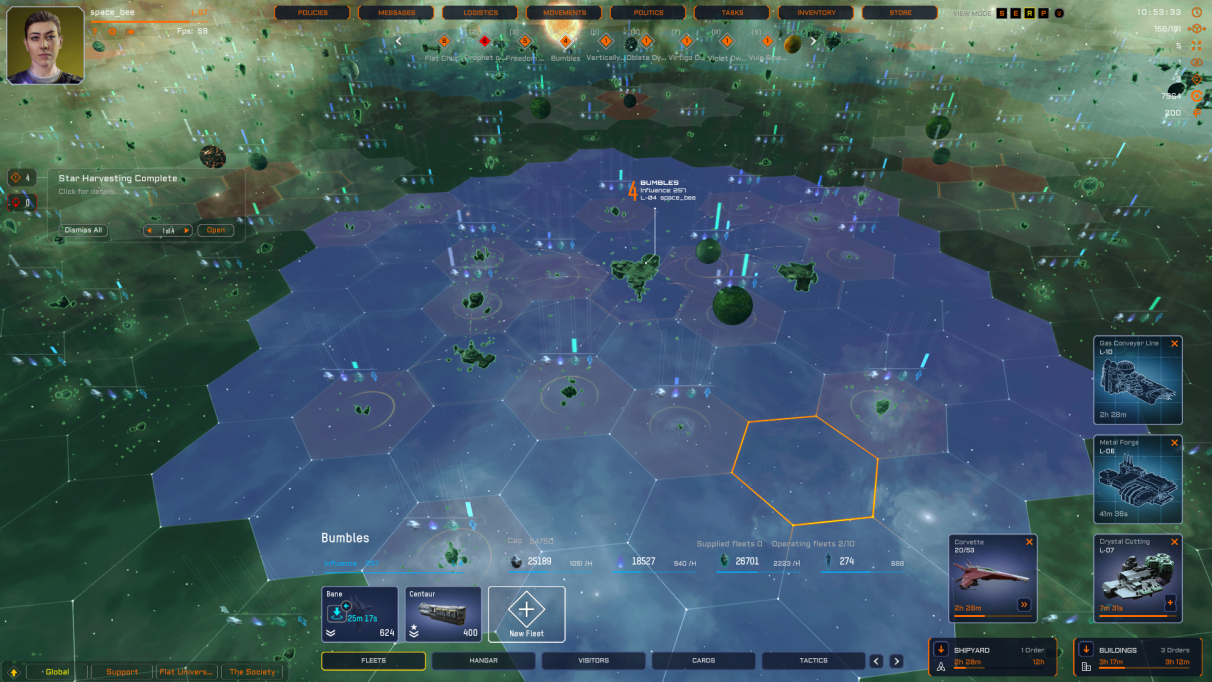 Such a design sounds like a daunting commitment - those of you familiar with EVE Online, or traumatised by the majesty and life-consuming skulduggery of Neptune's Pride might quail as I did. But Starborne is weirdly low-pressure. The time frames involved in moving fleets make it fire and forget, rather than the time-devouring "fire, notice your opponent reacting, cancel, adjust target, fire again, repeat" pattern I'd feared. It doesn't consume your waking thoughts, as checking in for five minutes five or six times a day is plenty, and I've gone whole days without touching it.

It also feels less personal. A bit like Planetside 2, the vast scale reduces the pressure to be individually outstanding. Alliances allow pooled resources and fleet movements and the construction of mega projects that decide the ultimate victors, but I joined an alliance out of sheer nerves. It seemed obvious that anyone not allied when the protective veil fell would quickly be consumed by their neighbours. As it turns out this is only partly true, as the prime targets are players who've abandoned the game, since they'll continue to accrue resources, whereas active players will put up a fight, and organised alliances are better off directing their combined ire at the bigger threat rival alliances pose. 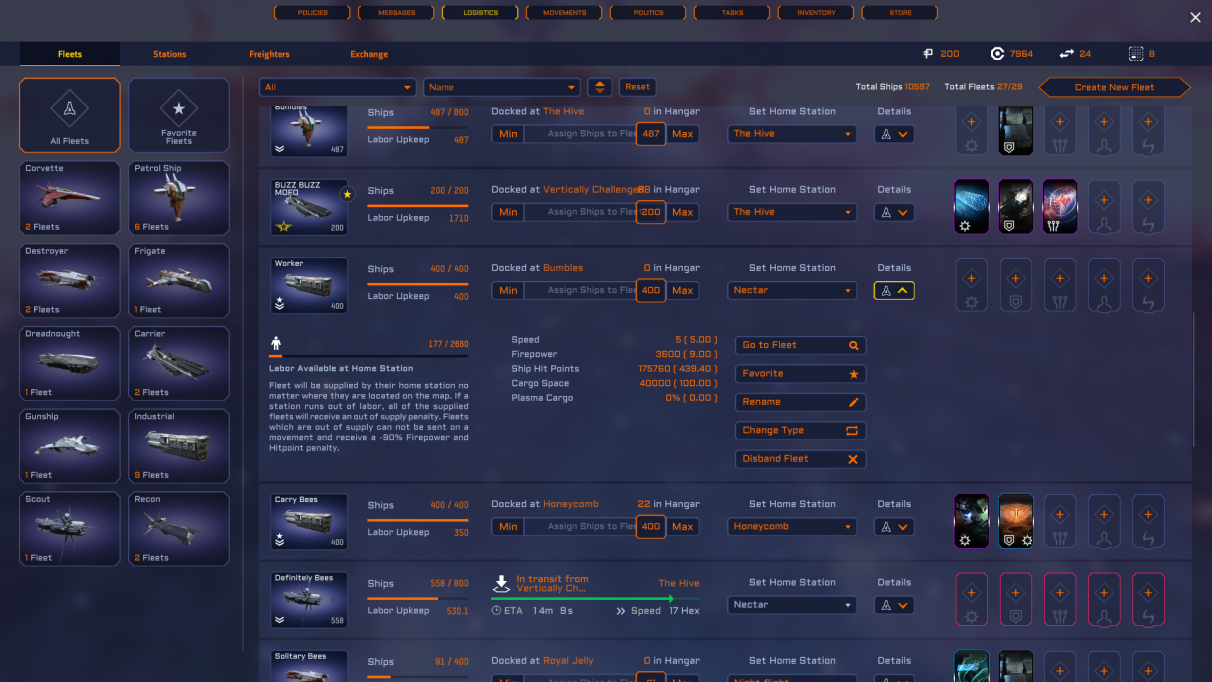 I was received warmly, and sorted into one of several affiliated alliances. Within the game, an alliance can include no more than 20 players, but there's nothing to stop them organising unofficially, and in later stages coalitions - alliances of alliances, essentially - become necessary.

It's particularly difficult to tell how typical my experience has been, since fully testing it would take longer than I'm expected to live. And I doubt everyone charms their way into an alliance with some of the most organised players in the game (they had a spreadsheet, for god's sake - I never knew I held so much vomit). But my main takeaways are that it's ... kinda nice? The cutthroat aspect I was expecting never materialised. Discord was a necessity, which is unfortunate for players like me who prefer to keep things in-game. They're a nice enough crowd though, even if the bewildering jargon being thrown around in the alliance chat was a little alienating. I felt lost and out of the loop, but also felt like I didn't entirely want to be in the loop. I'm enjoying myself on the periphery. I sulked for a while because I was convinced my slow, bewilderment-induced start would screw me mathematically, but in time I caught up.

There was a fun week where my affiliate alliance was gutted as players were reorganised among the coalition. I was left behind, and resentfully cancelled the masses of resources I'd been quietly pumping into now-neglected team projects. Suddenly I was able to invest in my own stations instead, and before I knew it I was in a stronger industrial position than even some of the coalition leadership. They gladly moved me up. I still don't understand exactly what we're doing beyond my immediate area, but I know that I'm helping. 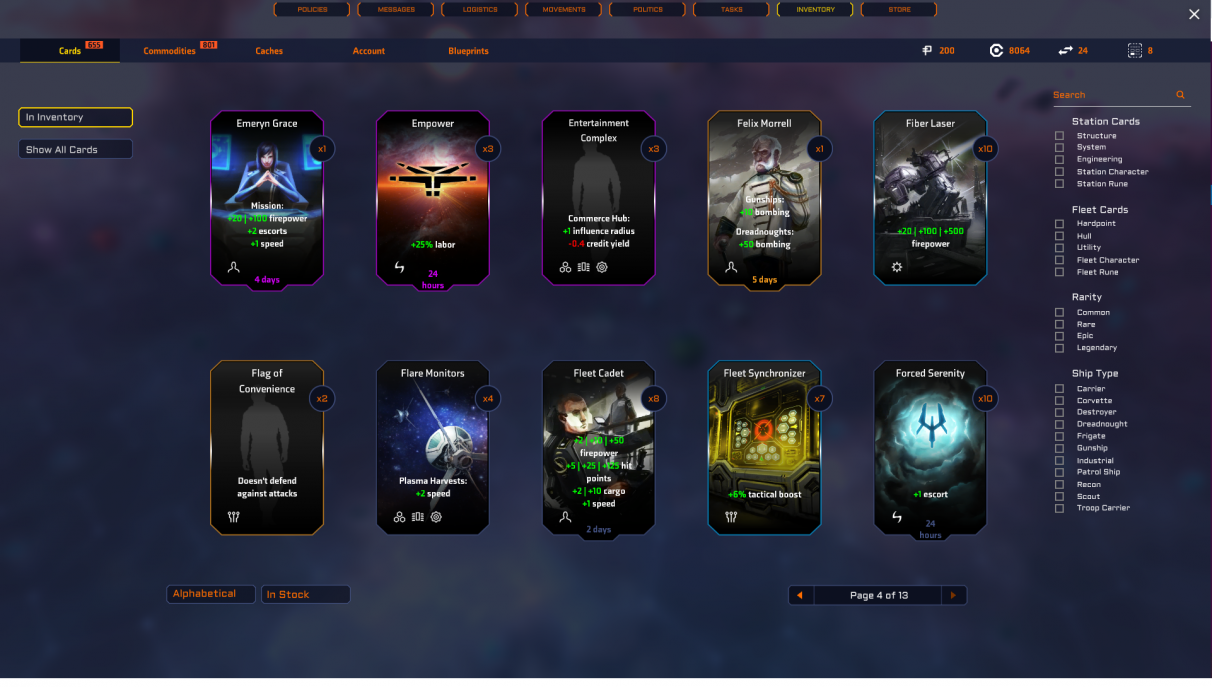 Although it bears comparison to some of those social farming games, it's not the insidious Skinner Box those often are, nor does it badger me or demand payment. There are lots of things you can buy, but I've never had them shoved in my face and honestly have little idea what they even do. The game generously showers even free players with so many freebies for reaching hundreds of different milestones that at one point I had over 1000 cards in my inventory. What do cards do? I didn't even know for weeks. I've since burned through a few hundred of them rush-building a station, but if I can get in the top 10% of the surviving 1500 players without even spending 80% of my free stuff, it'd be incredibly petty to criticise its financial model.

It could definitely do with dropping the bloody boxes though. Some cards are delivered in boxes, and there's no gambling element to this, but there is a deeply irritating process of clicking to look at the box, then again to open it, then again to take stuff from it, and pointless animations at each stage. This isn't unique to Starborne but it's an absolute plague on games. There's no gambling element, and you'll always take everything in the box, so it's a total waste of time. Just give us the goddamn stuff. 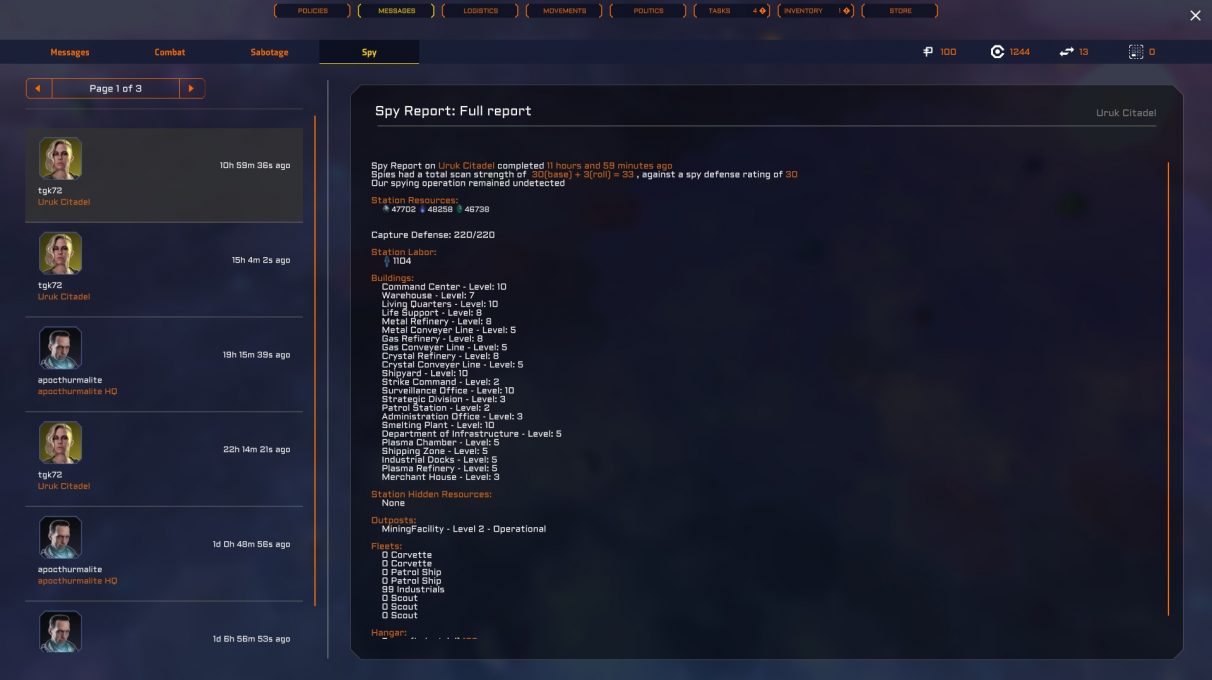 Its biggest problem in its current form is that it is absolutely terrible at explaining itself. The most basic concepts are a total mystery, and useful features were hidden to me for weeks. It sorely needs some very broad beginners' guides - a couple of paragraphs could answer a lot of questions. And no, a video is not good enough. What is "influence"? How do I mine? What should I be doing? What do scouts do? How many ships is enough for my first 48 hours? If I build X, have I already doomed myself? These are normal questions, and I've no doubt the total absence of answers is a major contributor to the high dropout rate. You can't count on the community to fill players in like the EVE community does.

The other possible problem relates to that. While I've learned a lot riding on the coattails of experienced players, it seems inevitable that even with everyone starting from scratch every few months, the same groups of people will end up dominating every game simply by being more informed and organised outside the scope of a specific campaign. 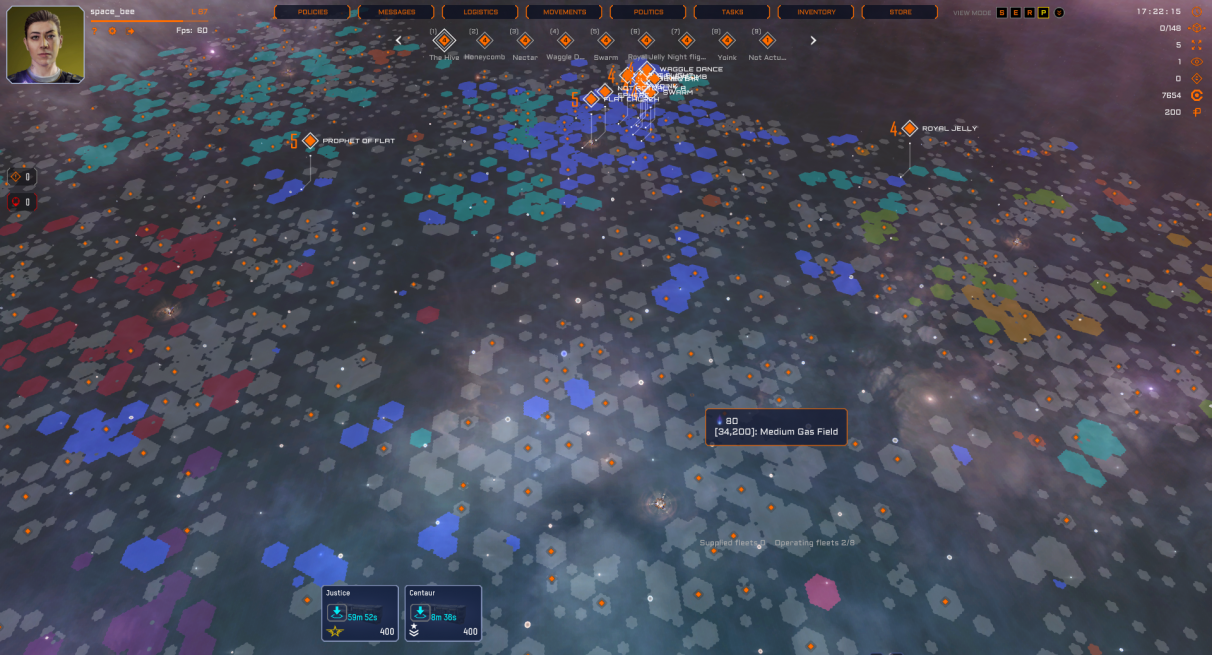 Is it fair to criticise Starborne for that though? It seems that no competitive game online can escape that fate. Perhaps the concept of a grand strategy MMO is doomed simply because of how the internet operates. I really don't know. But I'm glad to see people trying, and I'm having a good time seeing how this one goes.

Starborne is currently in alpha and playable for free via its own website.