Every week we give Brendan a small loan and tell him to invest in an early access game. This week, the Silicon Valley-ing of Startup Company [official site]

Okay, here’s the pitch. People love to share their photographs online, yeah? And people love to cook, yeah? Well, think of a food that people love to share, right? No. No, another type of food. No, okay, listen it’s stew, the answer is stew. Right, people love to share stew, that’s what we’re getting at here. All right, so what if you had an app, yeah, that dynamically and innovatively shared stew? Like, not real stew, not actual stew in a pot, but just like little pictures of stew. Collectible stew. Dynamically. I know! I know. We’re calling it StewPix.

I know what you’re thinking. This idea is half-baked. But semi-formed plans are what startup culture is all about. I know because I’m playing management sim Startup Company and I'm considering taking a third loan out to cover the losses of my two big apps. Our competitors might call these apps “failures”. I’d call them “experience showers”. 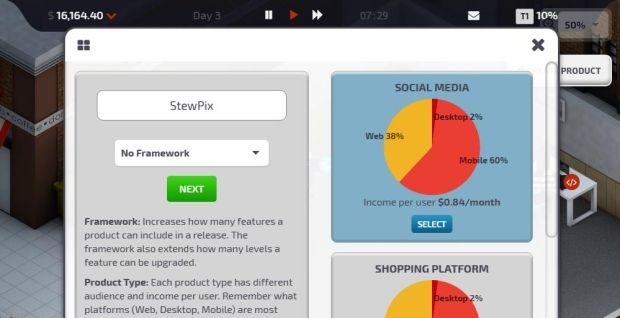 The ground is familiar. A small, isometric office in which you place desks, plant pots, wall divides, vending machines, sofas and so on. Hire some workers to create “components” and then sell these to other companies who hire you on contract. Later, you can hire new types of worker – lead developers, researchers, etc – to combine components into new modules which you could sell, but which you could also use to create your own apps, be they social media, video sharing, streaming or marketplace apps. Think of popular apps like Pandora, or Bebo.

It sets itself up as a management sim. You hire new workers, alter their hours with a HR person, send them on holidays and improve their mood with couches and coffee machines. But mostly it’s a game of clicking to and fro, and adding ingredients together. Kind of a tech-focused take on those tappy restaurant games where you put burgers and fries on a plate for customers. 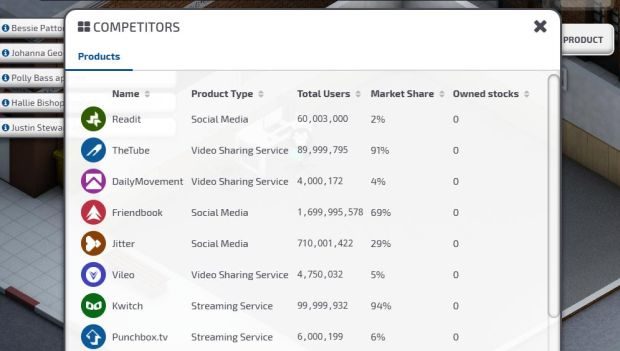 To start we just needed a couple of coders and a sales executive. This would be the beating heart of Krasznahorkai Solutions, a software house named after the Hungarian author of overwhelmingly bleak post-Cold War novels famous for having no paragraph breaks or discernible plot. That’s how we approach our work. We take a loan of forty thousand dollars and hire the three cheapest workers available: Rebecca Chavez, sales executive, and software coders Bessie Patton and Polly Bass, two names I will certainly get mixed up. I rename them Doris Salamander and Fastidious Valerie.

Doris and Val start pumping out contract work. I have no idea what their actual jobs entail, nor do I know what we are handing to the client at the end of it all. It all happens invisibly on their computers. This is truly what it feels like to be a manager. [Pretty much. --Ed] All creations exist only in abstract, as strange words and illuminated mouse clicks that can be exchanged for money, itself a vague approximation of a real substance. I install another plant pot. 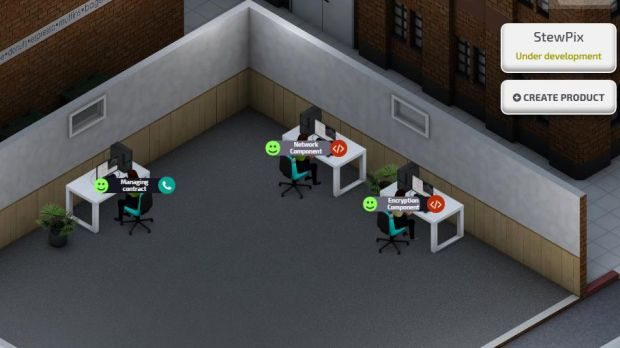 This is when I decide to make my own app. The social media do-hickey called StewPix. The original idea is that everyone who likes making stew will share pictures of their cooking. They’ll also rate each other’s stews and make comments. Ragout, gumbo, Irish stew, estofado, Ratatouille, Lancashire hot pot, jambalaya. Every conceivable slow-cooked bowl of slop will be allowed.

Sadly, the game doesn’t let you lay out the app in such detail. It just lets you name the thing and set the limits – I could have it web and computer based too. But this requires more components and who wants to sit at the PC when they have a large cauldron of Tajine to take care of. No, only a mobile phone landing page will be necessary.

The day finishes, but the game lets you jump to start of the following day’s work. There’s a fast-forward button and a pause function too, something efficiency nerds will like in the early days of their company. This is because the workers will need poked and reminded to work on a new component or contract every time they finish their current task. So pausing makes sure they don't idle for too long between jobs. To help with this, you can also hire a manager who sits there making sure workers automatically move onto the next thing, rather than idling on their computer, presumably fav-ing all their friends’ delicious stews. I recruit a manager – Fangs Shanker – to keep the employees in check. Here she is, looking ambivalent. 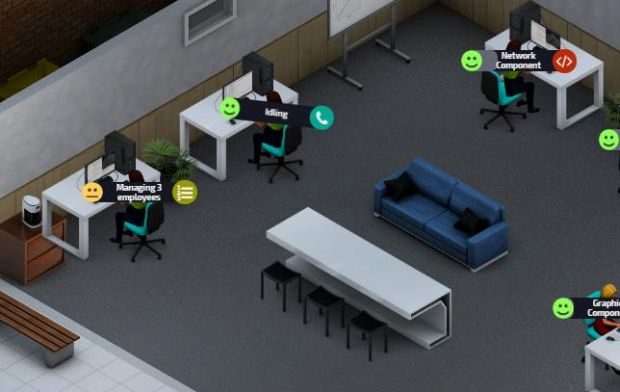 The game says I need something extra for the StewPix app, a missing component that nobody in the office knows how to make. So I hire a designer. But once Xandee Scandalbroth is seated at her desk, I discover she is also incapable of creating the necessary component. I had become confused and mixed up the icons (they do all look quite samey). I consider firing the new girl on the spot, but it feels bad to sack someone just because I don’t know the difference between a "graphics component" and an "interface module". So I keep Xandee on for now. Even though, looking a my finances, we’re currently over-spending by $19,000 a month. It is six days since we founded Krasznahorkai.

Time for a new tactic. I fire Chavez, the sales exec, and resolve to become an independent company, only working on our own apps. A rash decision, our investors might say, because completing contracts is how you make good money, earning $4000 and more for each delivery of components. By comparison, Stewpix is generating $4.40 every day, which the Silicon Valley establishment might term “underperforming”.

So we launch our second app. It’s called UrineLuck. 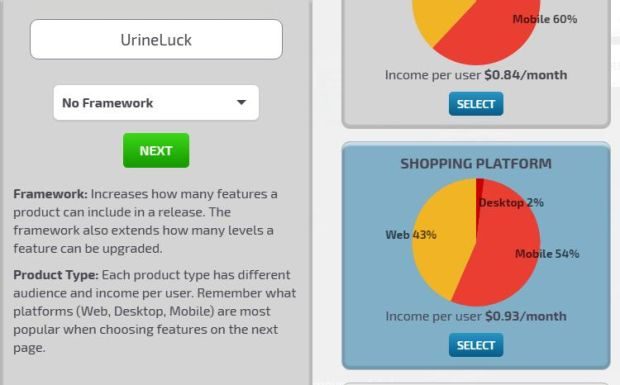 It's (conceptually) a shopping platform in which (conceptually) users will trade, sell, and buy (conceptually) urine samples for their own personal use (real). The terms and conditions I hold in my head assert that we hold no responsibility for what our users do with the urine. We do not endorse using urine to “cheat” fluid tests of any form. We do not transfer, hold, or otherwise examine the urine. Legally speaking, our hands are clean.

Four days later, I get an email from Liza Codersson, our new lead developer. She’s quit.

This isn’t because of the new app, I assure you. It’s really because she’s had a red sadface icon floating over her for days and I haven’t addressed it. You’re supposed to send people on holiday, I remember, to keep them from growing sad and throwing in the keyboard. Worried, I send the whole office on a three day break and pull down the shutters. Cleverly, the game knows nobody is there and just skips three days for me. Useful.

But that itself reveals Startup Company’s attitude. It knows its purpose is to keep the player clicking and fiddling, not watching an empty office. I’m dressing up a lot of this game with my own imagination because I have to. It sometimes feels like a clicker game masquerading as a management sim. You watch meters fill and click around from person to person to keep the machine oiled, occasionally upgrading, researching new icons to click, or finding ways to make a manager click on your behalf.

Compare this to Software Inc, which simulates things a little more thoroughly and puts much more emphasis on office layout, equipment, furniture and the like. It also features front pages and reviews, making your products feel like real things in its world and giving the sim some personality. They remain similar games but this currently feels simpler, more casual. In Startup, your apps are more abstracted. Circular iconography that wouldn’t mean anything if the player wasn’t around to name them “Stewr” or “PissApp”. 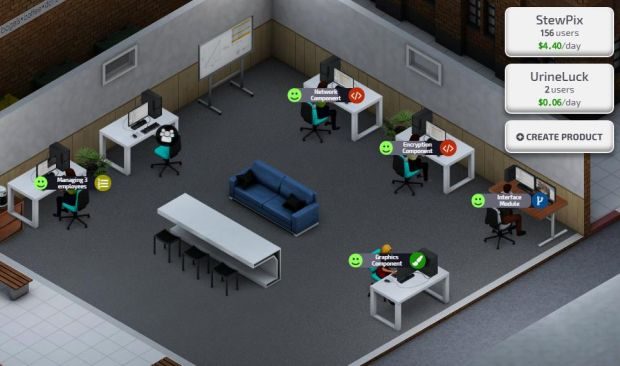 In the end, StewPix has been upgraded to a new version and now makes a whole $14 a day with a userbase of about 600 foodies swapping pictures of their favourite goulash. To host, it costs $375 per day. I decide to let everyone go. Once again Krasznahorkai Solutions is trailblazing. In just 40 days we’ve innovated and revolutionised the idea of a startup, flipping the paradigm so much that we’ve invented the “closedown company”. Now that’s disruption.