Ever since the Steelseries Arctis 7 rocked my eardrums at the end of last year to claim the top spot in my gaming headset rankings, no other gaming headset has even come close to matching its supreme comfort or exceptional sound quality - until now. Enter its brand-new shiny upmarket sibling, the Arctis Pro.

Borrowing the same understated design and ski goggle headband as the rest of the Arctis line, the Pro takes everything up a notch, introducing Hi Res audio support, a dash of RGB lighting around the ear cups and some primo build quality to make it extra feel durable and luxurious.

There are three Arctis Pros altogether: the entry-level USB headset, the top-end 2.4GHz wireless and Bluetooth version, and the middle one I've got here, the Arctis Pro and GameDAC. Starting from £179 / $179 for the regular USB headset (or £249 / $249 for the GameDAC model and £299 / $329 for the wireless one), the Arctis Pro is a proper nice bit of kit.

Underneath its stretchy black ski goggle material, its steel headband feels lovely to the touch, and the soft, plush ear cups are like two puffy clouds gently caressing your cheeks. Against my better judgment, I'm also quite partial to the subtle ring of RGB lighting round the ear cups' soft touch casing as well, even though I know RGB lighting on a headset is completely and utterly pointless when you can't actually see it. The wireless version, meanwhile, is more sensible, as this comes sans RGB to help you save battery life. 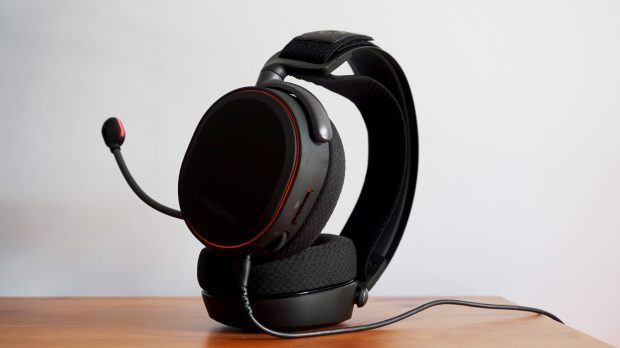 Still, it's that ski goggle headband that really seals the deal for me, as the way it suspends its steel frame above your head means there's very little risk of it ever pressing down on your skull and giving you a headache - which is something I find a lot of headsets tend to do because, apparently, my head simply can't abide your standard headset headband. With the Arctis Pro, however, I can carry on wearing it for hours at a time without the slightest bit of discomfort. Thumbs. Up.

The Arctis Pro also brings a swathe of smaller changes that make using the headset much easier day-to-day. The microphone mute button on the back of the left ear cup, for instance, is now much larger and easier to find, and its textured grip makes it just as prominent as the volume dial below it. The extendable microphone also turns a handy shade of red when you press it, too, so you know exactly when its muted and exactly when your friends can hear you slurping a large cup of tea. 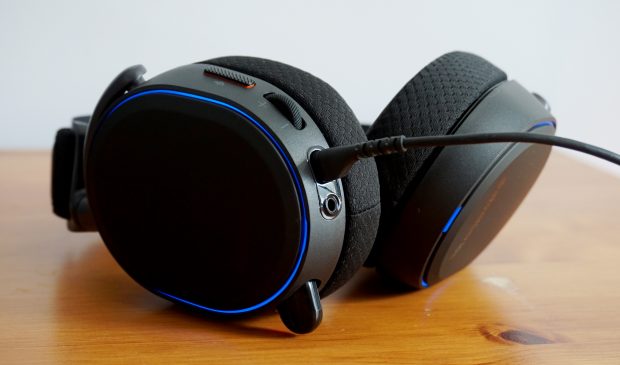 What makes this particular version of the Arctis Pro stand out, of course, is the USB GameDAC. PCs haven't always played nice with standalone DACs (or digital to analogue converters, which convert digital music files into analogue signals to be played by your speakers or headphones), what with sound cards all but being null and void these days and your motherboard typically having one of its own to deal with, but the DAC on the Arctis Pro has been built for gaming from the ground up, elevating the quality of the sound coming out of your PC while also providing a one-stop control centre for the entire headset.

Press that big lovely volume knob (I love a good volume knob, me), for instance, and you'll instantly switch over the headset's chatmix settings, which lets you fade out all background music to focus solely on your multiplayer chat, or vice-versa when you want to silence screaming eleven-year-olds from slinging curses at you). Hold it down, however, and you'll bring up the rest of its onboard menu, giving you access to its equalizer settings, sidetone and microphone volume adjustments, source inputs, RGB controls and various different playback options. The smaller button beside it, meanwhile, is for navigating backwards to the previous menu screen.

It's a highly intuitive system, and one that puts Steelseries' convoluted transmitter on the Siberia 800 to shame. The DAC's OLED screen also means everything's visible at all times, regardless of viewing angle, and the long USB cables you'll need to connect it to your PC and headset also make setting up and slotting it into your existing PC setup incredibly easy. Another thumbs up. 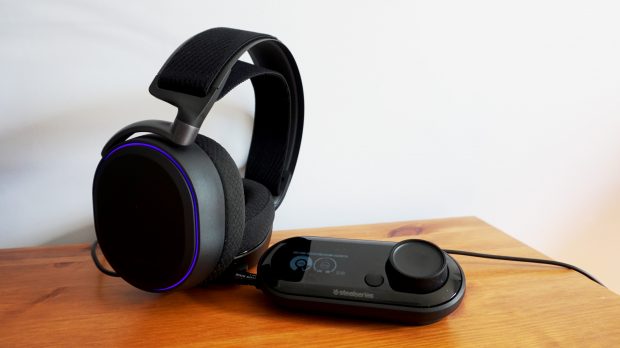 I realise I've now run out of thumbs to illustrate my approval, but you'll be pleased to hear that both of them remain resolutely in the upward direction when it comes to the Arctis Pro's overall sound quality. Of course, without the regular USB headset on hand to test as well, it's difficult to know exactly how much of a difference the DAC is making overall.

Still, bass-heavy shooter Doom pulsed and zipped along without ever sounding too overbearing, and I was always able to hear where every last demon rasp was coming from, allowing me to pump them full of satisfying super shotgun blasts with expert precision.

Likewise, the Arctis Pro gave Hellblade's 3D binaural audio and the voices inside Senua's head a real sense of depth and distance, making me break out in goosebumps every time one of them whispered in my ear behind the nape of my neck before they whisked themselves away again to the outer edges of my hearing. Whereas some headsets end up undermining Hellblade's voice performances, here the headset reinforced them, helping to create a vivid picture of Senua's mental state alongside what was happening onscreen. 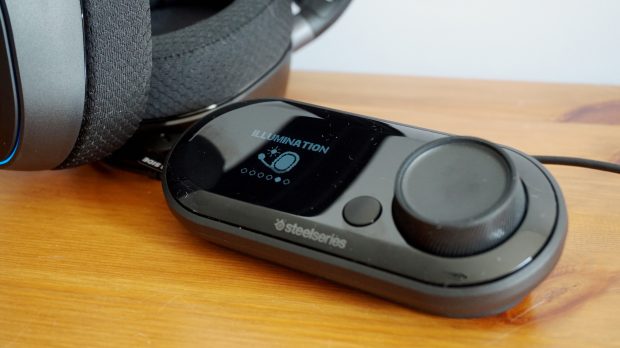 The Arctis Pro also piled on the stress when I gave The Evil Within a run as well, creating a tense, fraught atmosphere while I dealt with molotov-wielding zombies up close and dodged incoming air bolts from afar. Indeed, I've never been quite so glad to hear its Clair de Lune save room music spill through its dripping corridors, even when there's a shrieking lift grinding away in the background as it struggles to make its way down to us.

Admittedly, switching the Arctis Pro over to its Hi Res Audio input didn't seem to make a huge amount of difference when playing games, even though this is meant to focus the headset's entire bandwidth (thereby disabling its DTS HeadphoneX V2 surround sound and chatmix support) into delivering a superior audio experience. Instead, you're more likely to benefit from its Hi Res support if you have something like a Tidal music subscription or own proper Hi Res audio tracks.

The good news, though, is that the Arctis Pro is fantastic for general music listening as well. Even on its regular PC input mode, the Arctis Pro handled everything from Final Fantasy XV's delicate piano themes to thumping battles tunes with ease, creating a spacious soundscape that gave everything room to breathe and the chance to be heard. None of this strained highs and overblown bass nonsense; just great sounding music. 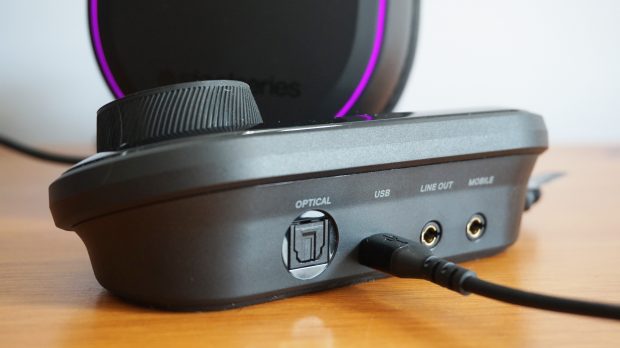 The same goes for 'proper' music with lyrics and people playing guitars and such. Whether it's your favourite rock band, indie folk duo or the opening theme from anime Attack on Titan, the Arctis Pro offered plenty of balance and crisp detail.

Speaking of detail, its bendy, retractable microphone is also excellent. It's quite short compared to other headset mics I've tested in the past, but chat was still crystal clear when I recorded myself talking, and I didn't hear an ounce of pop or blow-out wind effects either. If I had five thumbs, they'd all be pointing skywards.

The big question, though, is whether all this lovely headset goodness is worth paying for over the Arctis 7? The GameDAC is certainly a nice touch that beats having to deal with Steelseries' Engine software when it comes to making settings adjustments, but I wouldn't have said its audio quality showed £90/$90+ worth of significant, noticeable improvement - at least not using its regular PC input.

You'll probably get more out of it if you regularly listen to Hi Res audio tracks, although it's worth noting that while the Arctis Pro + GameDAC is Hi Res audio certified, its entry-level sibling is not, despite being 'capable' (according to Steelseries) of high resolution playback. As a gaming headset, though, I'm not convinced you can really hear that much of a difference between this and the Arctis 7. Or perhaps I'm just a half-deaf heathen who simply can't tell the difference between regular audio and all this Hi Res gubbins. If you love your audio and want the very best, then by all means go for it. For me, however, the Arctis 7 remains better value for money.