I don’t think many will mourn the death of Super Monday Night Combat. Uber Entertainment’s free-to-play follow-up to XBLA smash Monday Night Combat was something of a hidden gem, albeit one with its die-hard fans. It still sits at the top of my Steam most-played list, and I promise this piece isn’t just an excuse for dumping over a thousand hours in a game few people bothered to look at.

The fact is, the writing was already on the wall back in 2013. Servers might have kept running for another five years, but concurrent players have struggled to break double digits in all that time. Uber Entertainment cite the recent GDPR ruling from the European Union in finally killing off SMNC, but it feels like Kirkland studio shut the door on the game a half-decade ago - and only now remembered to turn off the lights. Nobody’s mourning, because we all moved on years ago. 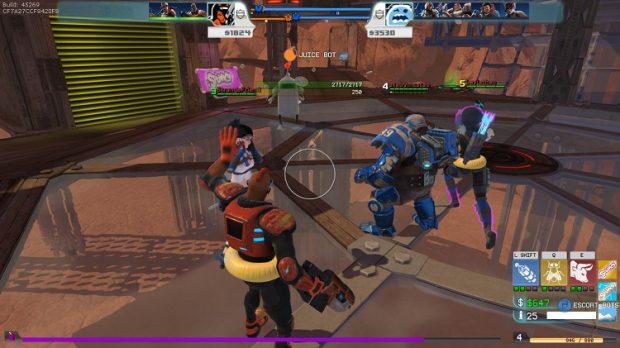 The Monday Night Combat games sat at a crossroads between Dota-likes and multiplayer shooters. Back then, both genres were hotly contested spaces. With specialised classes and vivid colours, there was a lot of comparison to Team Fortress 2 flying around MNC. But while it wouldn’t come out for another five years, MNC shares a lot more DNA with Overwatch. Even setting aside Uber and Blizzard’s shared a love of tanky gorillas with Tory accents, Monday Night Combat smashed hero abilities onto hectic gunplay years before Blizzard took their shot.

Super Monday Night Combat ramped up the MOBA parts of its predecessor, and made things free to play. Heroes (or “Pros” in the game's parlance) rotated weekly, with meta-layers of stat boosts and game-changing buffs. Pushing lanes and gaining levels became far more important, and with the presence of environmental hazards and lucrative jungle mobs, map control was vital. It had the fast-paced action of a first-person-shooter, with the strategy and synergy of Dota - all within the manic wrappings of a dystopian bloodsport.

But the best of both worlds came with the worst of both worlds. FPS fans found it sluggish and confusing, while limited heroes, abilities, and a lack of items meant the breadth of options in play didn’t come close to that of a Dota or League of Legends. Concurrent player figures peaked at just above 1200 back in 2012, and from then on the game was in a slow, painful decline. Being an online game, there were inevitably nasty elements and moments of tedious drama in SMNC’s multiplayer scene, but its smallness also made for a vibrant, passionate community, determined to keep the game running as long as possible.

Somewhere in The Netherlands, south of Amersfoort, an American and I are sitting around a kitchen table. Late at night, we’re playing by lamplight and laptop glow. The building itself is open-air, which is a nice way of saying a couple of walls are missing, and we have enough power sockets for a small lamp and our machines. The shadow of a mouse darts across the floor every few minutes. Our volunteer shifts are over, there’s internet, a bunch of folk have logged into Mumble. This is my experience of Super Monday Night Combat at its purest.

My teens were defined by online communities. Awkward early years were spent buried deep in (frankly, disastrous) Garry’s Mod servers. I’ve written about the ways World of Warcraft guilds were a playground for exploring my identity. Where the support of scheming elves (more so the scandinavians behind them) helped me come to terms with my queerness. Where I felt the real world had failed me, online spaces became my home. 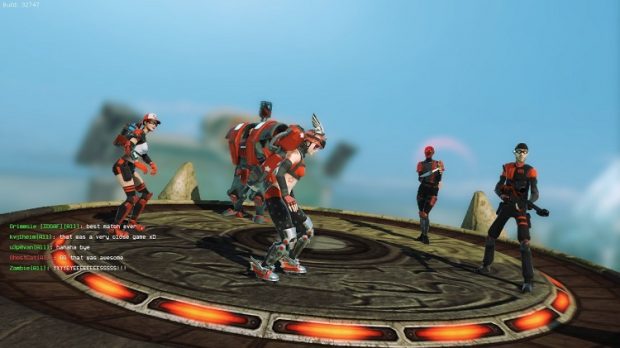 Super Monday Night Combat was the last time I went all-in on a community like this. It sat in something of a transitionary period, between those painful teenage years and what would become a more defined adulthood. Playing SMNC at its peak was about bouncing between Mumble channels for homebrew tournaments, delving deep into scraps of lore in buried corners of the forums, and spontaneous duelling to prove that, yeah, I’m better at this Pro than you.

It was about drinking through community calls, where players gave tours of their garage through grainy webcams. There was also a nonsensical amount of bullshit - typical internet arguments, subfactions within subfactions of players. Looking back at your own forum posts from six years ago isn’t a punishment I’d wish on anyone. But when I remember SMNC, I remember this communal spirit. Doomed optimism for a doomed game.

Super Monday Night Combat didn’t die quickly. Player counts began to slip soon after the game came out of beta. The addition of TF2 hats, new game modes and Pros, and positive critical reception stemmed the bleeding for a while. But marketing was poor, the on-boarding was rough, and the overlapping segment on the venn diagram of shooter and MOBA fans weren't convinced. Uber’s attention moved elsewhere. Uber Entertainment are studio formed by RTS veterans, and it eventually became clear a lot of the company's excitement (and budget) moved towards their next game, Planetary Annihilation. 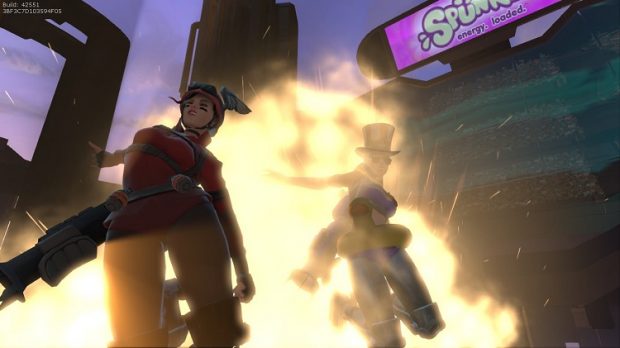 I was sort of done with the whole game-forum-community thing either way, at this time. The fall of SMNC maps out pretty perfectly with my own breaking out into a better person. It would have been easy to coast through university as a shut-in - remaining reliant on established online spaces, begrudgingly taking part in the real world as I had to. But long-time homes like Super Monday Night Combat were dying. If it had shut down in an instant, people might have migrated to another game, the community might have remained. Instead, regulars drifted away one by one. Slowly losing online spaces, I replaced them with offline spaces.

It wasn’t seamless. Figuring out who I wanted to be as an adult was rough, and I often found myself jumping back into old habits. This fed my Warcraft habit for a long time, naturally, and it brought me back to Super Monday Night Combat more times than I’d like to admit. There were enough players, I’d argue to myself. I could maybe get a few games in if it was peak hours in the US. 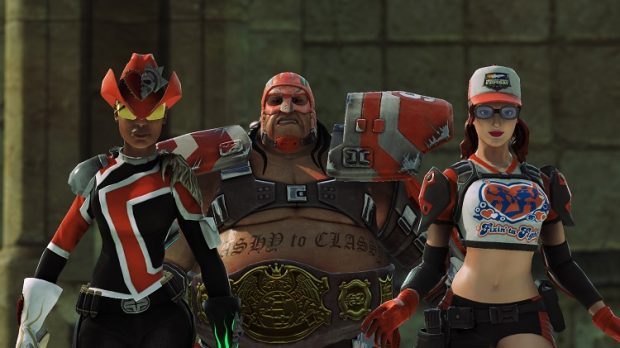 But much like my consistent attempts to find MMO guilds, the spark was gone. These scenes are unrecognisable nowadays. I’m likewise no longer filled with free time and teenage angst - I’ve got bills that need paying and can’t spend all my time deep in lore arguments. Super Monday Night Combat died slowly, but in its death throes I learned to spend less time playing games, and more time working on myself.

Shuttering Super Monday Night Combat now, in 2018, doesn’t feel like a loss. For years, I’d pop back into the game with the hope of getting a match together - relive the glory days. Of course, all that’s been there since 2014 is a broken main menu and empty chat rooms. At best, there might be a couple kids grinding custom games to unlock the TF2 hats.

I’m not going to miss Super Monday Night Combat when the servers go down on May 23rd. The game I love has been gone for years. SMNC marked the final word in a weird, confusing, and extremely stressful chapter of my life. Shutting it down is an excuse to finally leave it all behind.

I’m a better person these days - to myself, at least. In part, I have this awkward, failed game to thank. 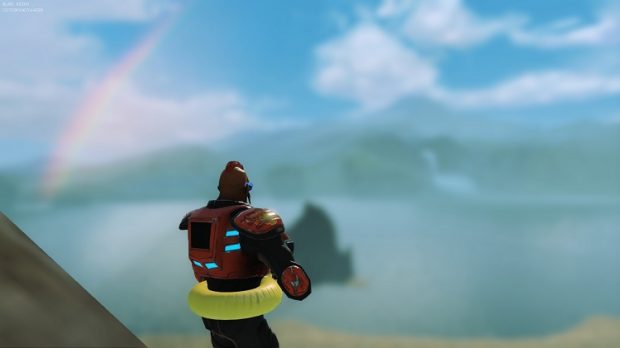