Bits are both the joy and bane of board games. You know, bits - those fiddly counters, miniatures and cubes of plastic, wood or metal (oooh, fancy). On the one hand, the tactile sensation of slamming down a plastic train in Ticket to Ride, cutting off your opponent’s train route to their howls of anguish, is one of life’s greatest pleasures, and a feeling that’s near impossible to replicate in videogames. On the other hand, what a motherclucking pain in the posterior they are. When they’re not being eaten by the dog, they’re being ricocheted off the walls by a careless dice roll or nudged into oblivion by inebriated players slamming into the table on their way back from the loo. “Harold, you absolute numpty, what have you done? Can anyone remember how much wool I have?”

Terraforming Mars suffers more from calamity Harolds than most board games. This massively popular strategy game was released in 2016, and it’s currently sitting at number five in the BoardGameGeek top 100. Now, it's coming to PC.

The basic aim is to accrue the highest 'terraform rating' by, er, terraforming Mars the most. You play as one of a suite of mega-corporations, each with a unique ability, and the game sees you playing cards to do things like seed the planet with algae to generate oxygen or crash an asteroid onto the surface to raise the temperature. Every time you modify the planet like this, you increase your terraform rating.

Unfortunately, all this environment-manipulating fun means that Terraforming Mars requires approximately one gazillion tiny cubes (figures may be rounded) to keep track of everything from how much heat you’ve generated to how many plants you’ve got. Even worse, the game boards appear to have been manufactured from a kind of futuristic frictionless cardboard that ensures your cube-based economy will be scattered to the four corners of the Earth (er, Mars?) by even the slightest passing breeze. Indeed, such is the scale of the problem that players have taken to buying or 3D printing cube overlays for Terraforming Mars to stop those pesky cubes from wandering off, with a full set sometimes costing as much as the game itself. 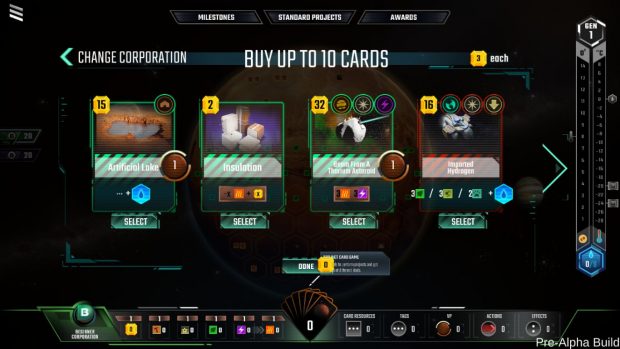 So one major positive for the upcoming video game version of Terraforming Mars is that it finally frees us from the tyranny of bits and their wayward travels. Behold, your cube-based economy is now represented by neat little numbers running along the bottom of the screen. Huzzah! Sing Hallelujah! Oh joyous and happy day to be released from the scampering capriciousness of skating cubes!

Another massive positive for this videogame version is that all the fiddly calculations are done for you automatically. When playing the board game, it’s all too easy to forget to, say, move the temperature marker. And things get really fiddly towards the end. For example, you might have to remember to add an animal to your Pets card every time you build a city (this game can get really weird in places). Thankfully, all of that is taken care of for you here. 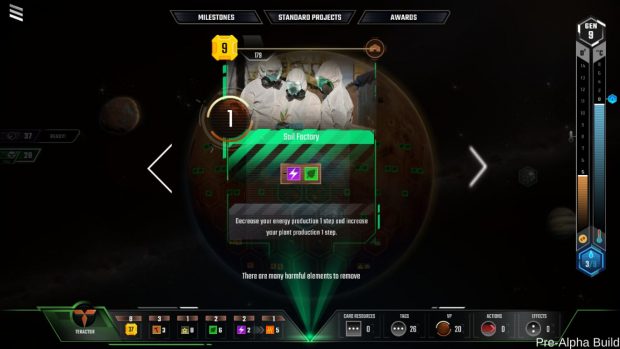 I had a go on a pre-alpha version of Terraforming Mars that allowed play against a single AI opponent, and I found it to be an extremely faithful replication of the board game. Perhaps a bit too faithful. A few things have changed, like the symbols on the cards (‘tags’ that represent Jupiter, Earth, Science, and so on) have been standardized in nice simple outlines, and the cards themselves have been redesigned with a funky sci-fi look that reminded me of the menus in XCOM. But the sometimes hilariously bad public-domain stock photos that adorned the original cards are still very much in evidence. Depending on your point of view, this is either a Very Good Thing or a Very Bad Thing. I couldn’t help but smile when I once again saw the ‘Soil Factory’ card, with its trio of hazmat-suited scientists adoringly gazing upon a tiny plant like it’s a leafy Jesus. The shonky photos provide a sense of familiarity for people switching from the board game version. Even so, it gives the game an undeniably cheap feel that appears at odds with the whizzy XCOM menus.

And speaking of menus, these do tend to obfuscate the action somewhat. One of the key mechanics in the board game is the set of Awards that players can aim for. Each Award gifts five victory points to the player who fulfils the condition. For instance, the Science Award gives five victory points to the player with the most Science tags at the end of the game. But you have to fund the Awards to activate them, and only three can be activated per game. Plus they get progressively more expensive to fund. When playing the board game, funding the Awards is quite a decisive moment as one player slams down a cube, effectively signalling their game strategy. “Aha, Mathilda has gone for the Miner Award! Verily, she is quite the titanium hoarder. [Thinks: Now must I increase my own mining capabilities to wrest the accolade from her hands, or fund the Banker Award and focus on filling my coffers? ‘Tis a conundrum.]” 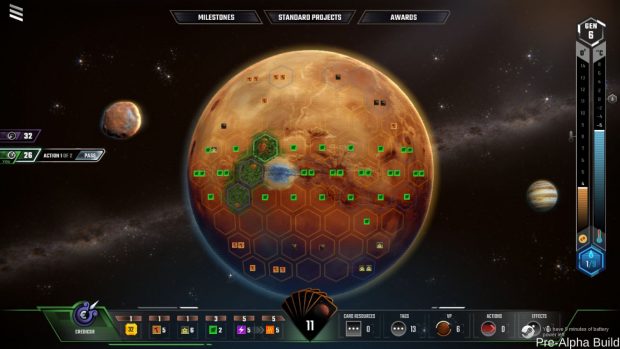 In the board game, this is all very obvious to see, but in the video game the Awards are hidden behind a menu – and I sometimes found myself aiming for an Award only to discover the AI had already nabbed it without me knowing. In fact, this is a bit of a problem generally – it’s not very clear what moves your AI opponent has made, which is important because you might need to focus your game on, say, countering their hoarding of steel by stealing it (pun intended) or otherwise upping your own production. It would be useful to have some clear way to represent which cards the AI has played other than clicking through menus to see what they’ve done or squinting to see which tiny numbers rise up on the AI’s turn.

Then again, the version I played is far from finished, so there’s plenty of time and scope for improvements to be made. One thing I’d like to see is a little more ambition in terms of the graphical representation of the colonization of Mars. The map of Mars itself is nicely animated, with water spewing forth from aquifers and greenery spreading out across hexes, and there’s a welcome if entirely superfluous option to zoom in and see the planet in glorious detail. But playing the cards, which often embody exciting things like crashing asteroids into the planet or erupting a volcano, is a bit of an anti-climax. You select them, and then the numbers go up or down. Admittedly, that’s exactly what happens in the board game, which left you to simply imagine the cataclysmic impact of an asteroid – but this is a video game, and we don’t have to just imagine things.

Terraforming Mars is shaping up to be a faithful adaptation of a beloved board game, with all of the fiddly bits and calculations thankfully taken care of under the silicon hood. But those bits, for all their fiddly awfulness, also give the board game a sense of tactility - the satisfying feeling of tip tapping your cubes up the number scale or slamming down an asteroid card and vaporizing your opponent’s plants. It feels like this digital version of Terraforming Mars could do with a little more bombast and spectacle to give a reason for choosing it over its cardboard cousin.

Also, you can’t cheat, which everyone knows is the real joy of board-game bits. “Yes Harold, I definitely had eight plants before you went to the loo, are you implying I’m a liar?”