This year I picked/packed a better holiday game than holiday book. Although J.P. Kenyon definitely knows his onions (his onions being 17th Century England) his descriptions of the myriad squabbles between king and parliament that led to civil war are pretty dense and difficult to follow, even for someone who knows his ship money from his tonnage and poundage. Factor in glorious sunshine, post-hike weariness, and a surfeit of cakes and ale and you'll understand why my bookmark only advanced 85 pages during my week away. While Fantasy General has its own difficulty  and scrutability issues, I can't say I ever put it aside with a puzzled frown on my face or dozed off in the middle of a turn. 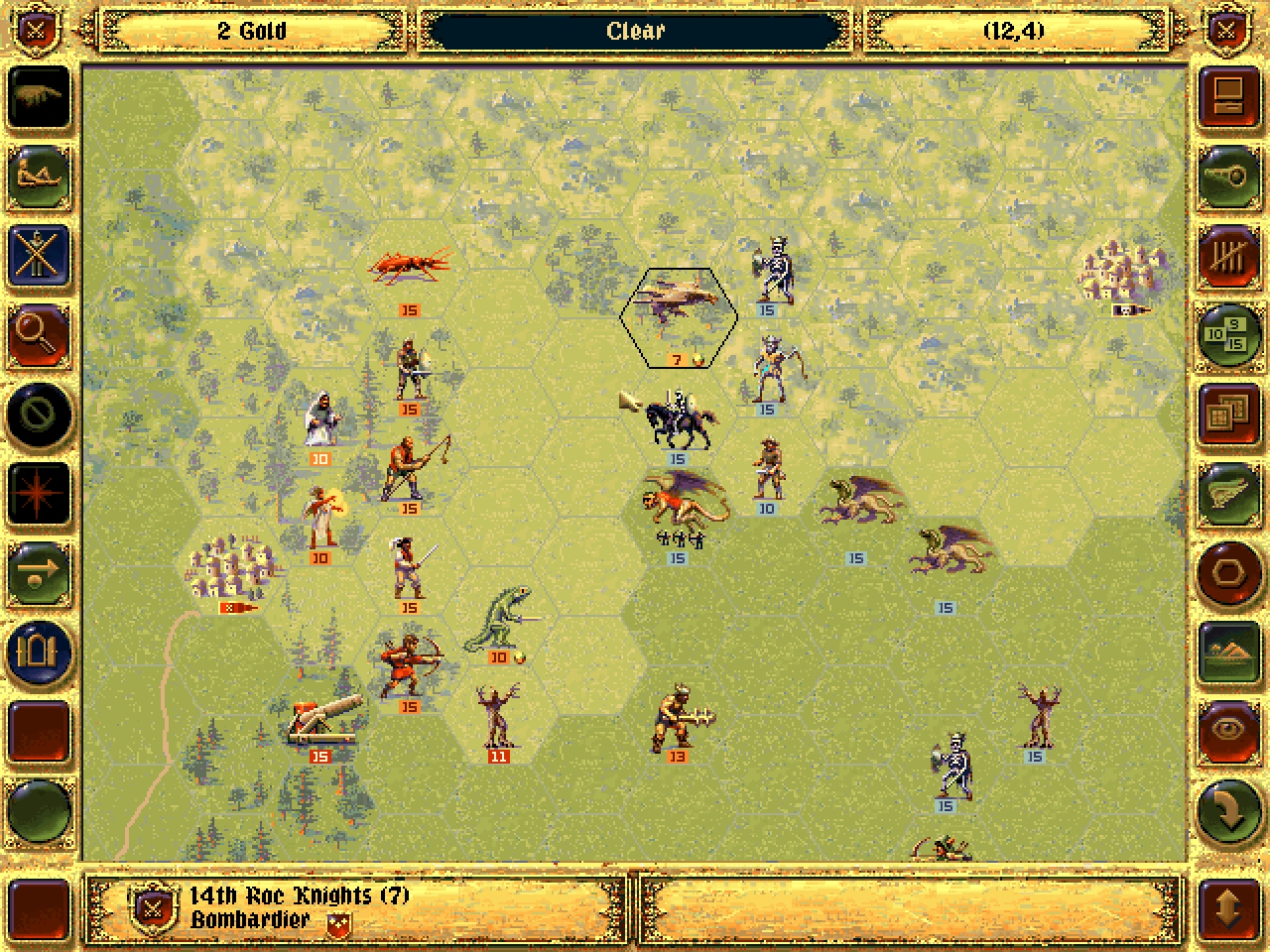 The third instalment of the acclaimed '5-Star General' series, Fantasy General was no lacklustre Panzer General re-skin. Not having played it for over a decade, I'd forgotten just how fabulous the art and music was, and just how rich and appealing the 180-strong unit roster. Magic, heroes, and 'wounds' disrupt familiar PG combat patterns beautifully and regular injections of new exotic troop types make liberating Aer much more interesting than blitzkrieging Europe.

Judging by the three vlogs released thus far, while Fantasy General II: Unnecessary Subtitle may well prove a friendlier, more legible wargame, it might not please the eye and ear quite as deftly as its predecessor. There's a charm to FG's sprites, GUI, and incidental art, and a sumptuousness to its soundtrack I reckon Owned by Gravity will struggle to emulate. 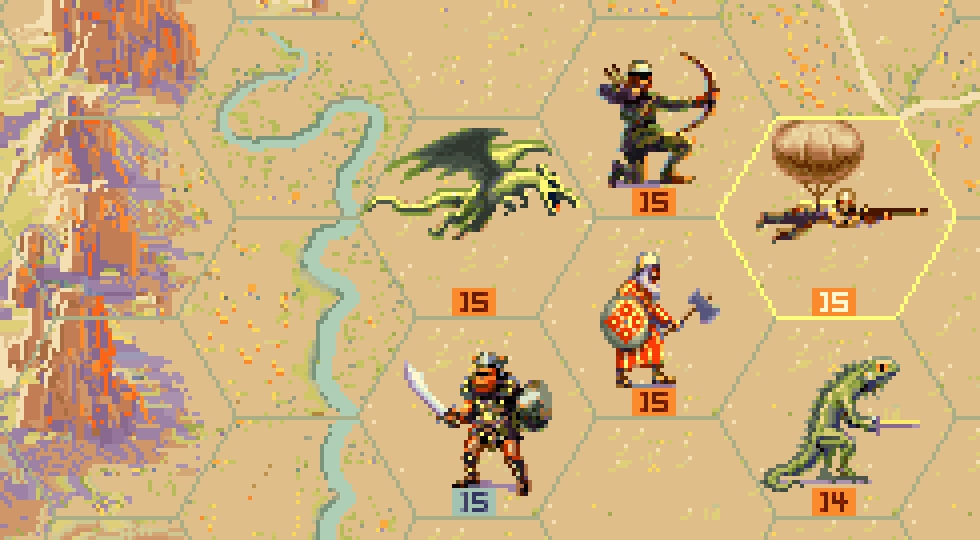 Two-dimensional and motionless except when expiring, the pixellated wizards, warriors, beasts, and 'mechs' that stud battlefields manage to radiate character without complicating and obscuring that all-important tactical picture. We've grown accustomed to animations and changeable perspectives in our hex fare – after a few hours with FG you may find yourself wondering whether the old way wasn't the best way. 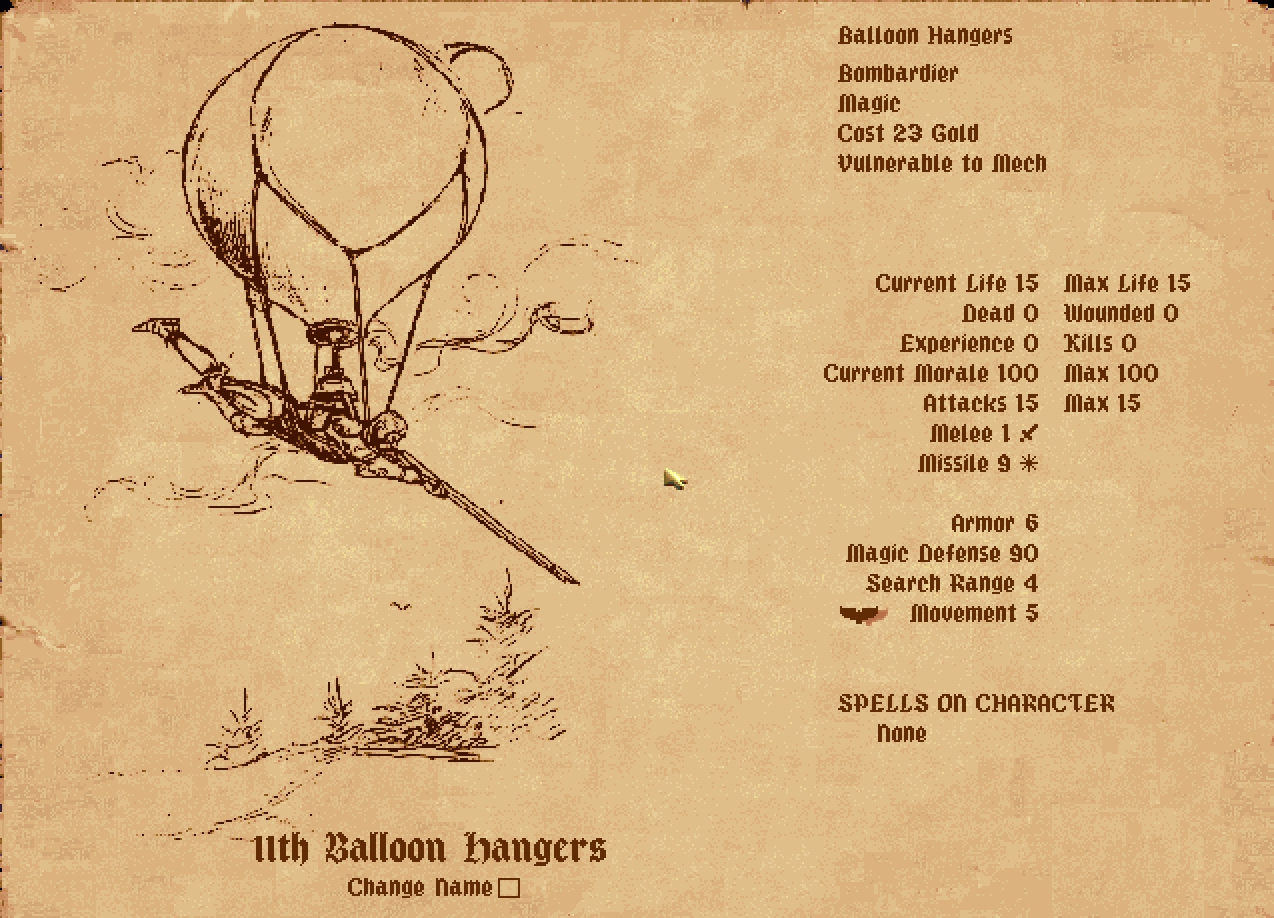 My affection for the dated sprites, gilded GUI, and sepia unit sketches possibly has an element of nostalgia in it. Not so my admiration for Rick Rhodes and Danny Pelfrey's haunting score. Punctuated by neck-hair elevating choral refrains, the soundtrack features original settings of various medieval and baroque ecclesiastical pieces and hasn't aged a bit during the past quarter-century. Together with faintly Da Vincian 'mech' units, it helps skew a fantasy tone that might otherwise be a little too conventional for its own good. 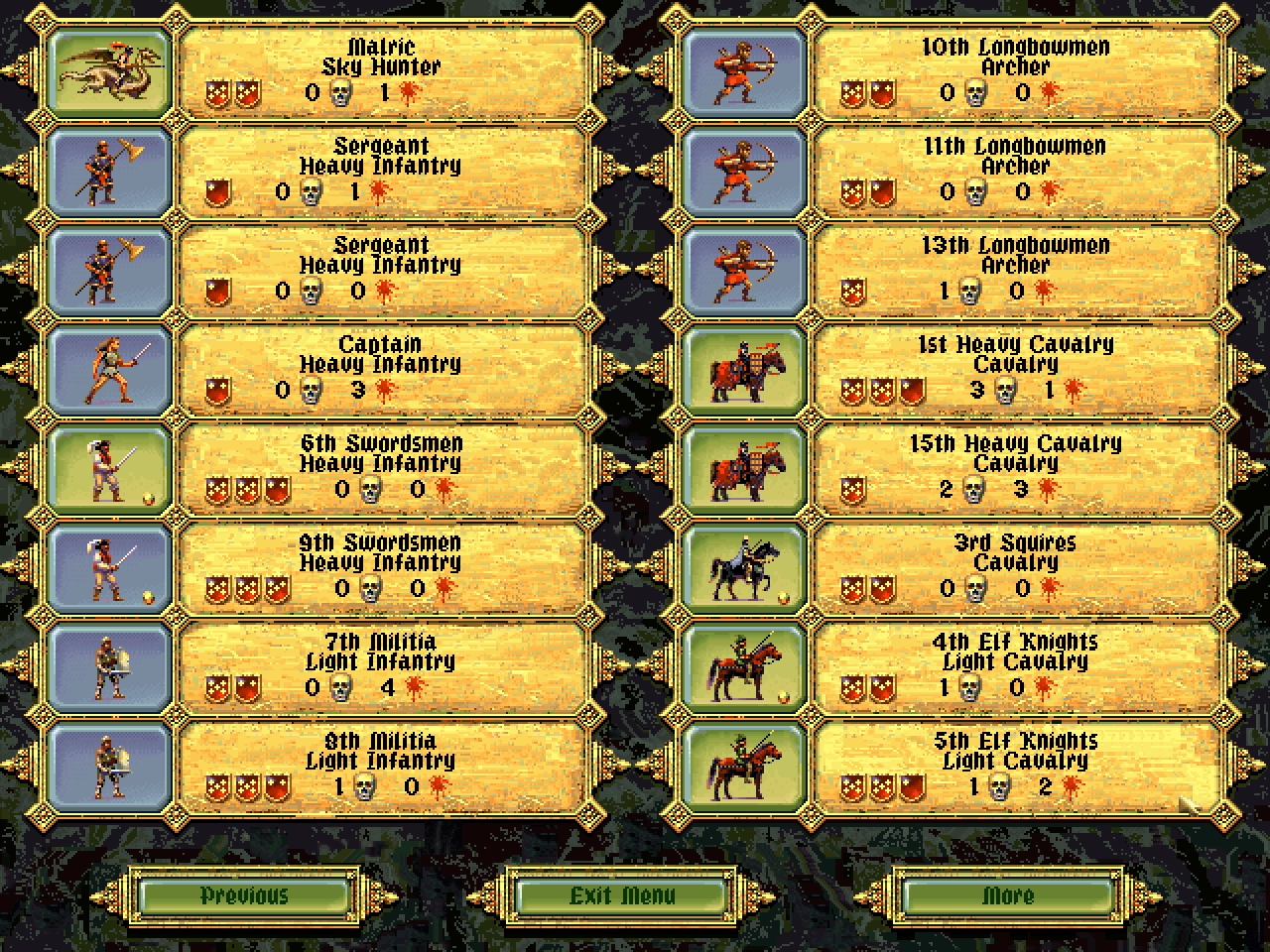 It will be interesting to see how Owned by Gravity handle the nitty-gritty of combat. In FG you're encouraged to move warriors in and out of the frontline by a likeable bifurcated damage system. Most units* can suffer 'kills' and 'wounds' during a clash. Both types of damage deplete the same strength tally and may ultimately lead to elimination, but because each is 'repaired' in a different fashion (wounds can be fully healed by resting a unit for a single turn away from danger. Kills are replaced by recruiting reinforcements, for a price, at friendly settlement) they impact battle flow differently. Often it's not a question of 'Which enemy should my veteran lizardmen attack next?' it's 'Where should they go to lick their wounds or reinforce? '. Although FG doesn't model supply, holding the areas and roads behind your lines so R&R can take place in safety, can be important, so there is a taste of it.

*Heroes and special 'single entity' units only ever suffer wounds. 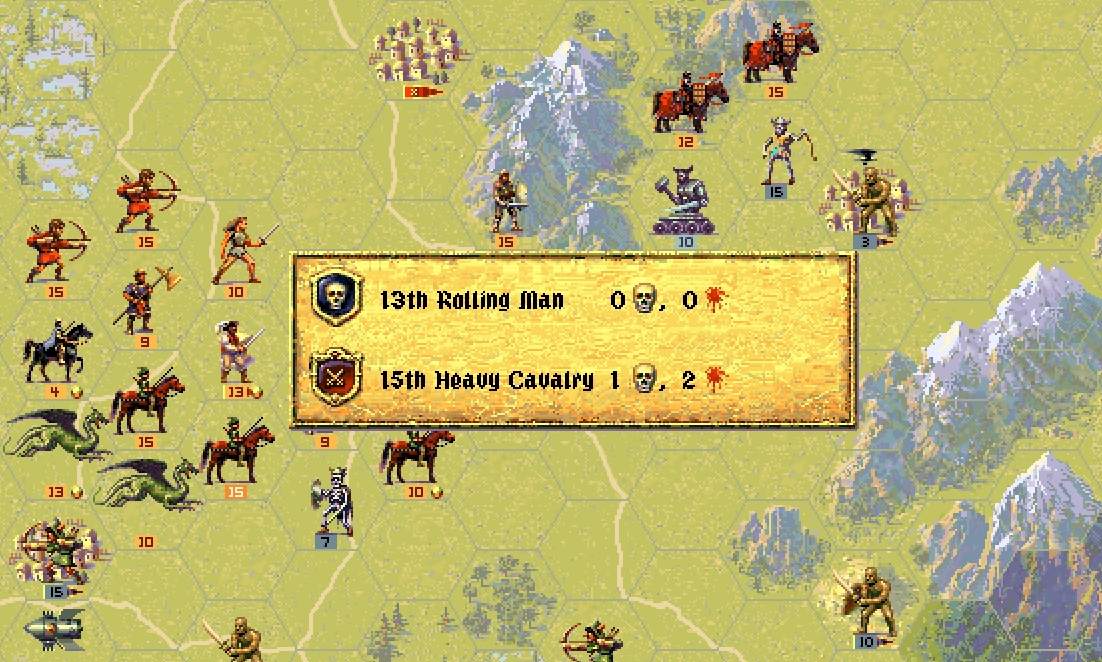 The game's handling of luck, morale, and terrain is similarly pleasing, similarly nuanced. The PG-style battle results indicator gives you an idea of how an attack is likely to go but isn't totally reliable. SSI judge the uncertainty quotient just about perfectly, in my opinion. Staggering luck reversals are very rare, but you await every results pop-up with keen interest just in case. In the process of finishing off that bruised bronzeman it's just possible your centaur squadron might suffer an unpredicted loss or two and become 'disordered' into the bargain (disordered units generally auto-retreat). A single minor misfortune probably won't upset your applecart, but every now and again a rash of bad luck fractures a spoke or jolts you into a tramline. Along with thick FoW and competent-if-conservative AI the vein of unpredictability helps breathe life into campaign scenarios that are, unfortunately, prefabrications rather than strat map by-products. 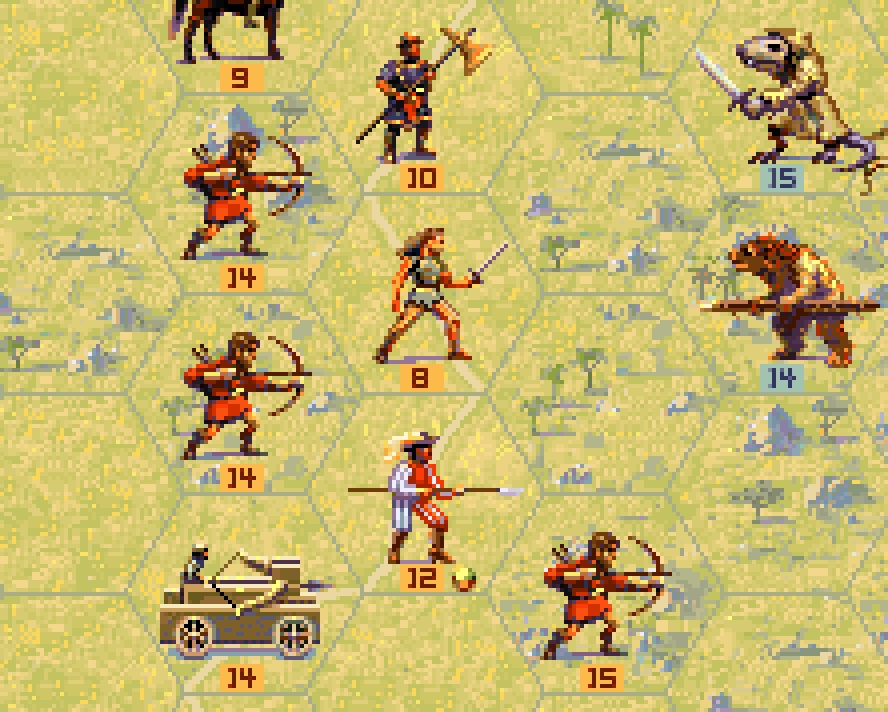 Telling terrain, that land warfare wargame essential, is an FG attribute. Skirmishers and light infantry thrive in the sort of wet, woody, and rocky hexes that cavalry and heavy infantry loathe. You ignore road networks, swamps, and mountain ranges at your peril when scheming advances. 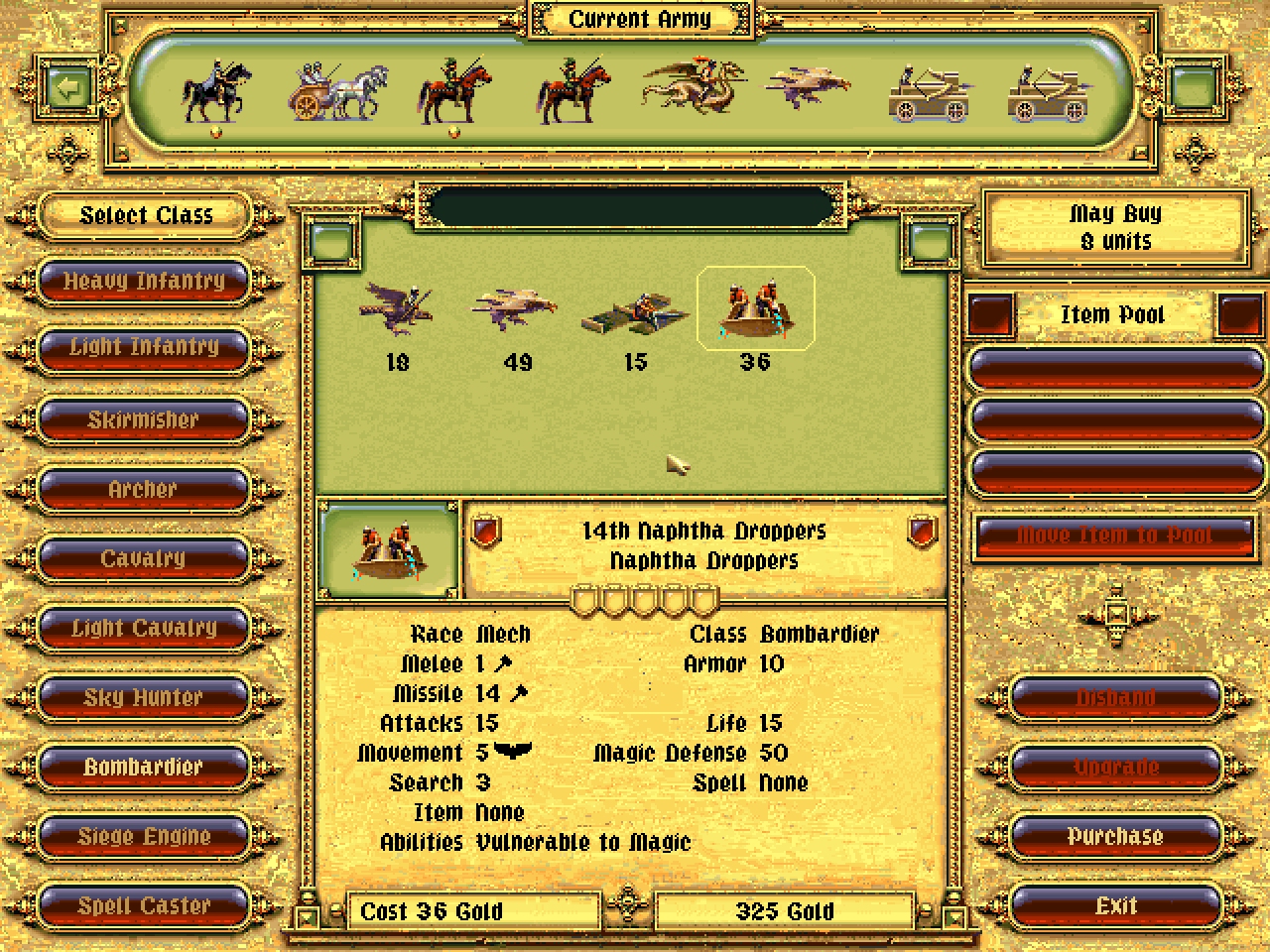 The lack of weather is mildly disappointing. A Panzer General feature not carried over, it could potentially have added welcome texture to the aerial side of the game. As it stands, the only meteorology that impacts 'sky hunters' and 'bombardiers' (basically fighters and bombers) is the sorcerous kind - wizard-generated whirlwinds and the like. 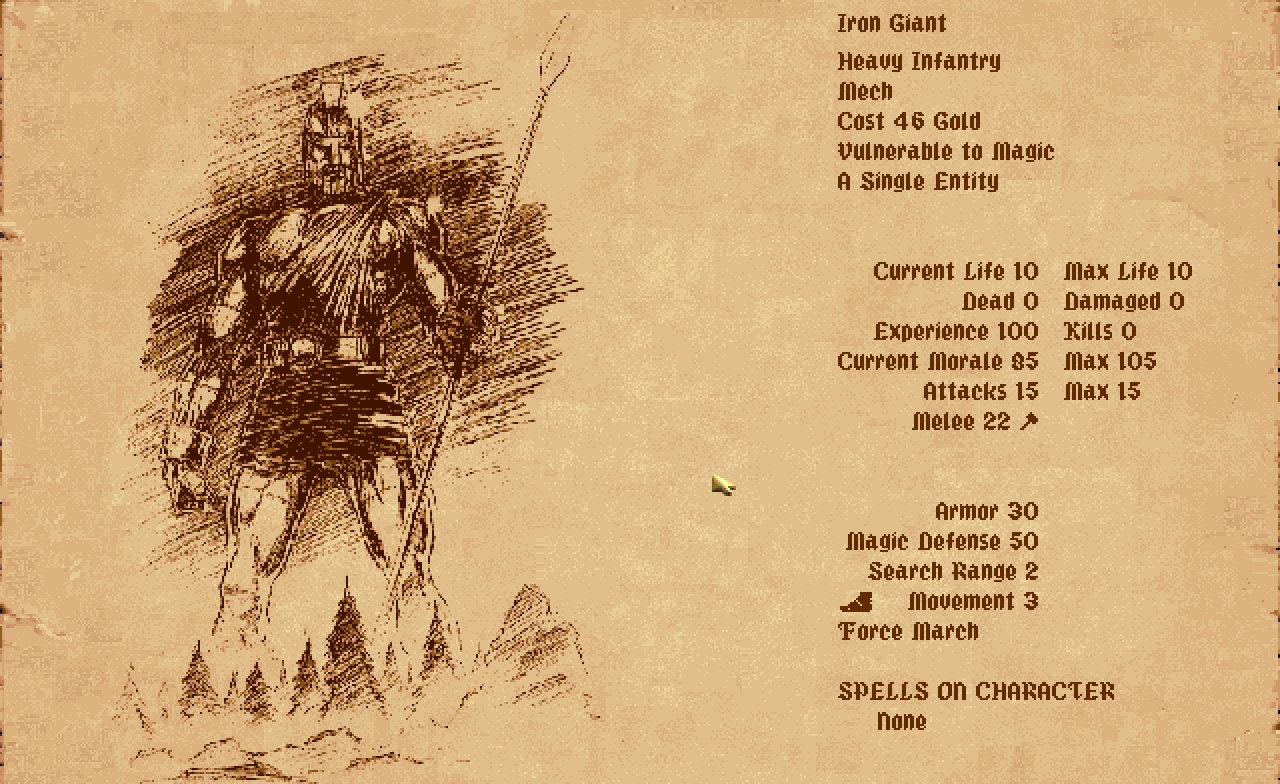 Which brings us to spells, one of the main mechanical reasons why FG scraps feel very different from PG ones. Although on-map spellcasters come in relatively few forms (16) their range of party pieces is broad and colourful. While the infantry, cavalry, and missile hurlers, are trading blows and projectiles, wand wielders can be animating trees, charming adversaries, causing earthquakes, hastening or concealing allies, raising the dead, healing, blessing, fear-instilling, fire-raising... you name it. Every unit has a level of innate magic resistance which discourages willy-nilly wizardry (you'll want to consider an enemy's 'magic defence' stat before loosing an offensive spell). 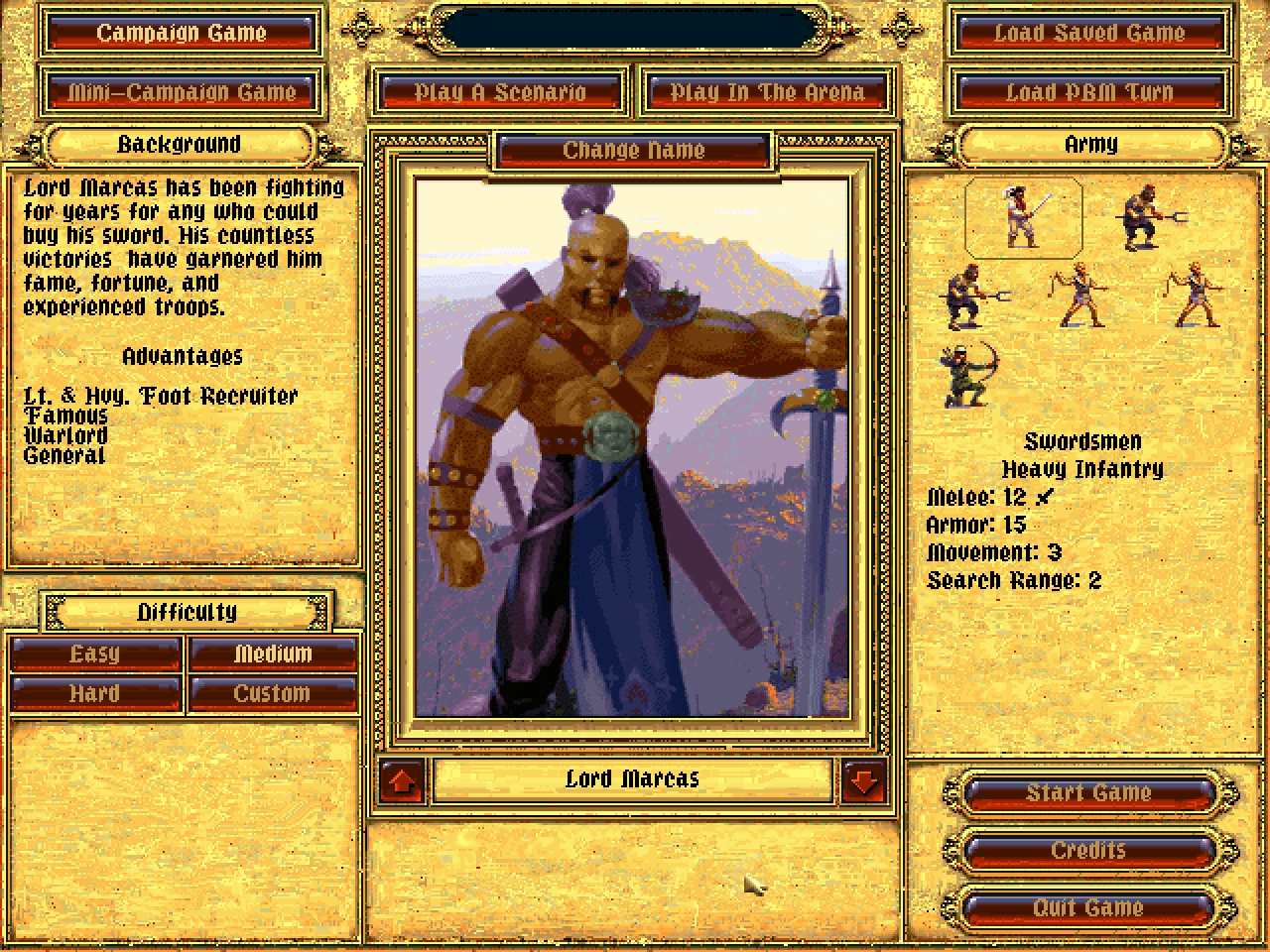 The most powerful spells are one-use-per-battle jobs linked to the character you select at the start of the campaign. Many units are shared between the four different revolt leaders, but who you choose at the beginning of the scenario sequence tends to influence the composition of your persistent, upgradeable and expandable core army. Musclebound Marcas is a charismatic infantry magnet, a man who can manage a larger force than any of his peers and recruit experienced foot soldiers at bargain rates. Archmage Krell has his own battery of spells and gets cheap sorcerers. Knight Marshal Calis is an equestrian specialist with a nice line in supernatural first-aid. Sorceress Mordra has sole access to animal units, a choice of two potent spells ('plague' and 'heal beasts') and a wardrobe that makes journeys through the Valley of Thorns extremely trying. 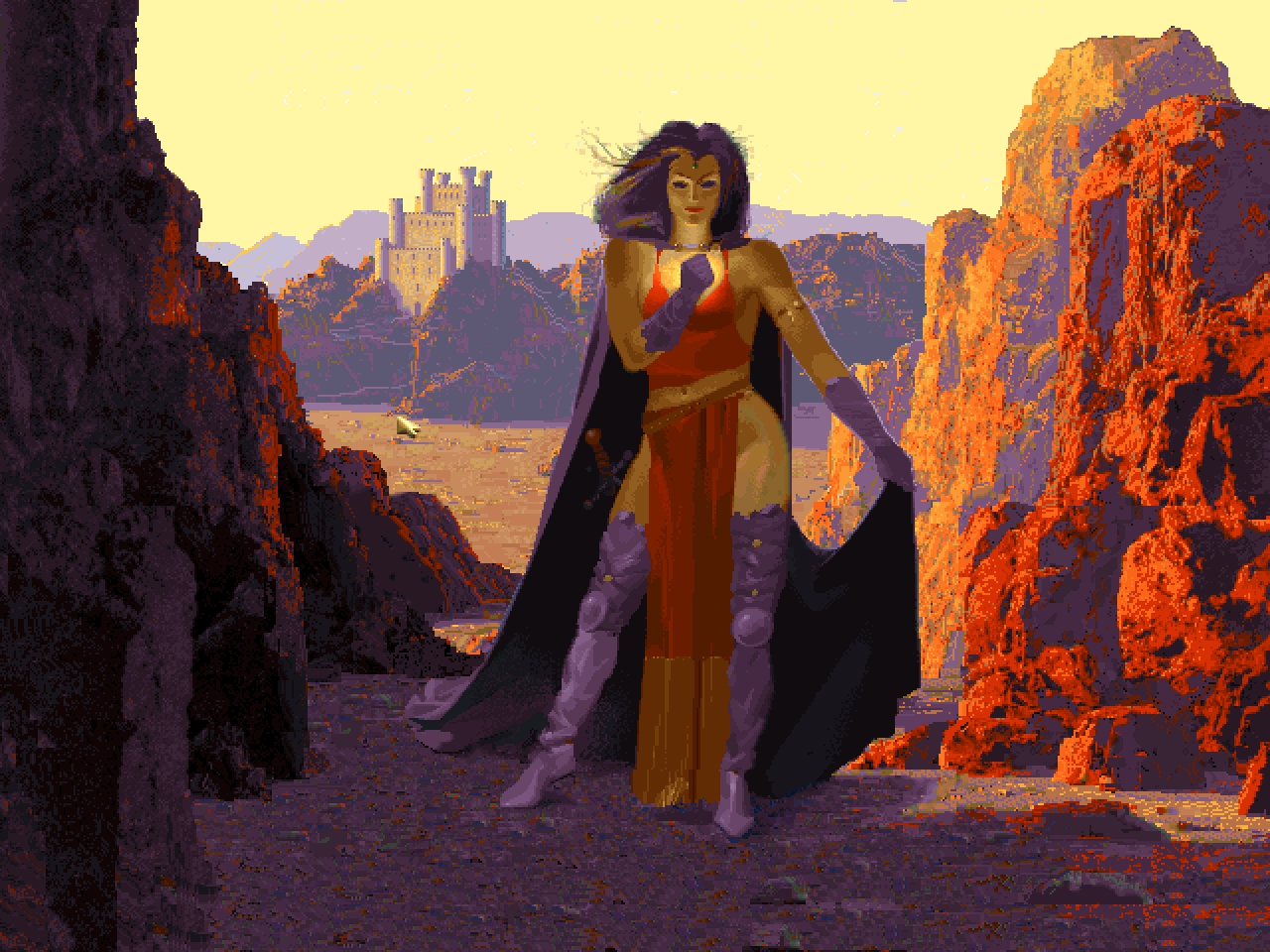 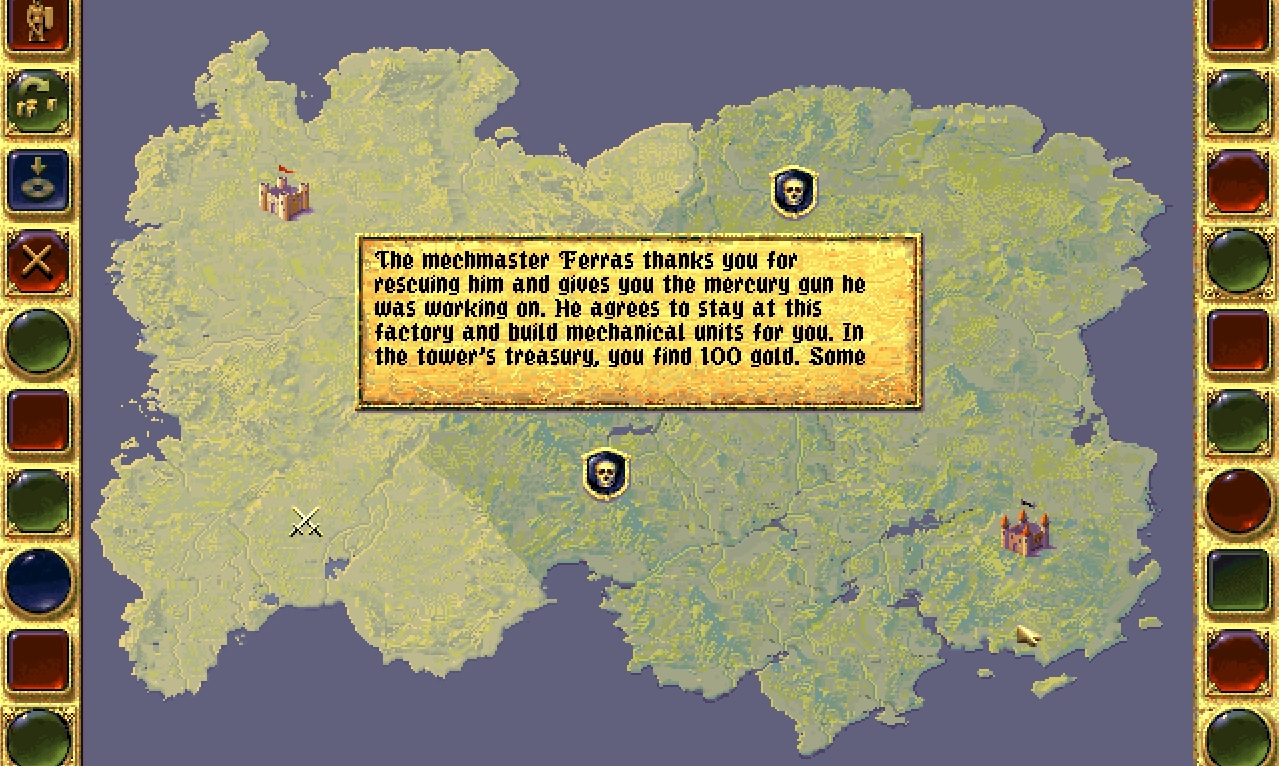 The least successful aspect of SSI's design has to be the campaign. Defeat-intolerant and always ready to punish a player who fails to nurture their core army properly, it's, for all intents and purposes, a lengthy chain of scripted scenarios. There are battle choices but as it's impossible to judge engagement difficulty before selecting a map shield, you tend to click and hope. By the time you realise you don't have the cash or experienced troops necessary to make further progress, it's often too late to take remedial action. A restart or a return to an early save is the only option. 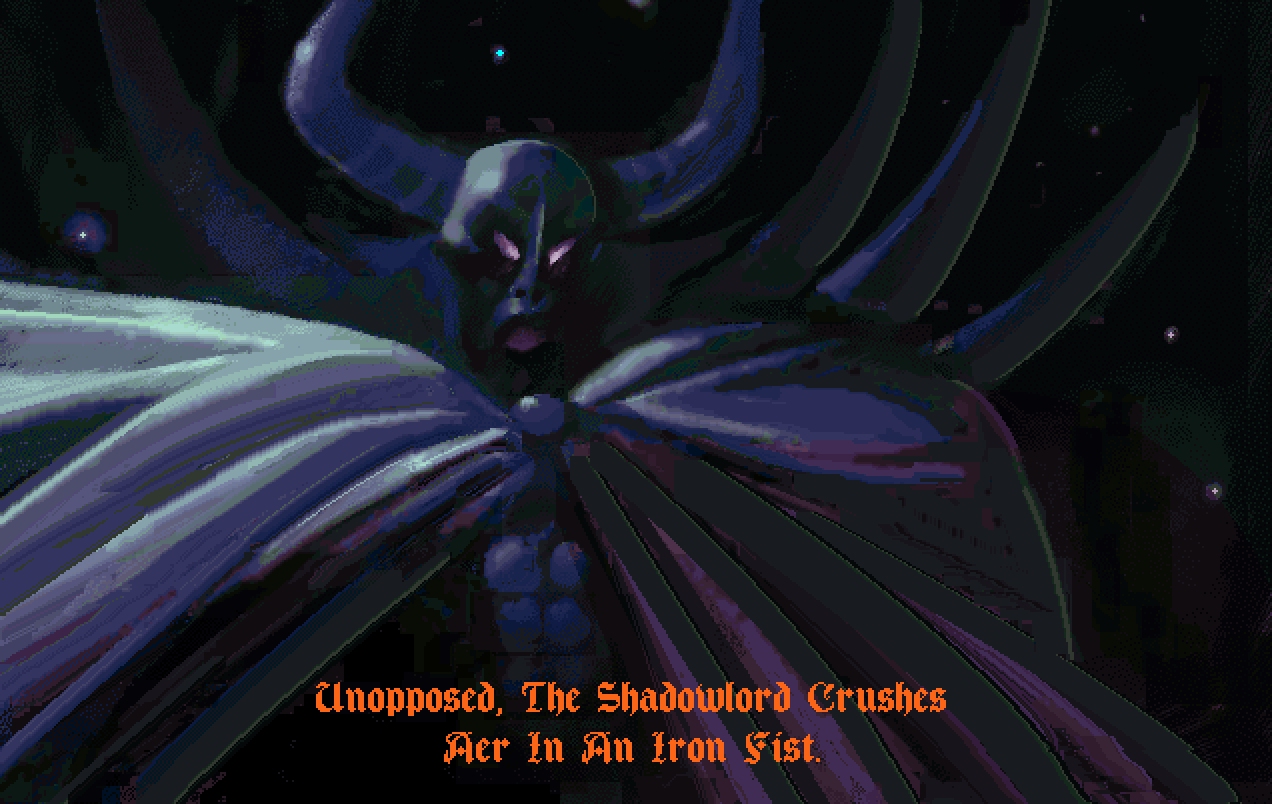 Hopefully, Fantasy General II will be kinder. I'm hoping to encounter fuzzy or flexible turn limits in the sequel (in FG you can be one hex from the last VL and the battle will still end at the prescribed time). I'm hoping a single defeat won't prompt a screen like the one above, and there will be ways to make amends for early purchasing and research mistakes. I realise there's a very thin line between “Don't bar my campaign progress needlessly” and “Let me win at all costs” but if the will, funds and imagination are there, I 'm convinced a wargame can tread that line.

The cellular strat map with a belt of weakly defended territories surrounding your start position is the obvious mechanism, but the sword-and-sorcery setting allows for more novel solutions. Has a fantasy wargame ever offered a struggling gamer a Faustian pact – permitted them to march on in return for a sold soul or contaminated principles? I rather like the idea of a player arriving at the campaign victory screen friendless... transfigured... little better than the tyrannical monster they've ousted. 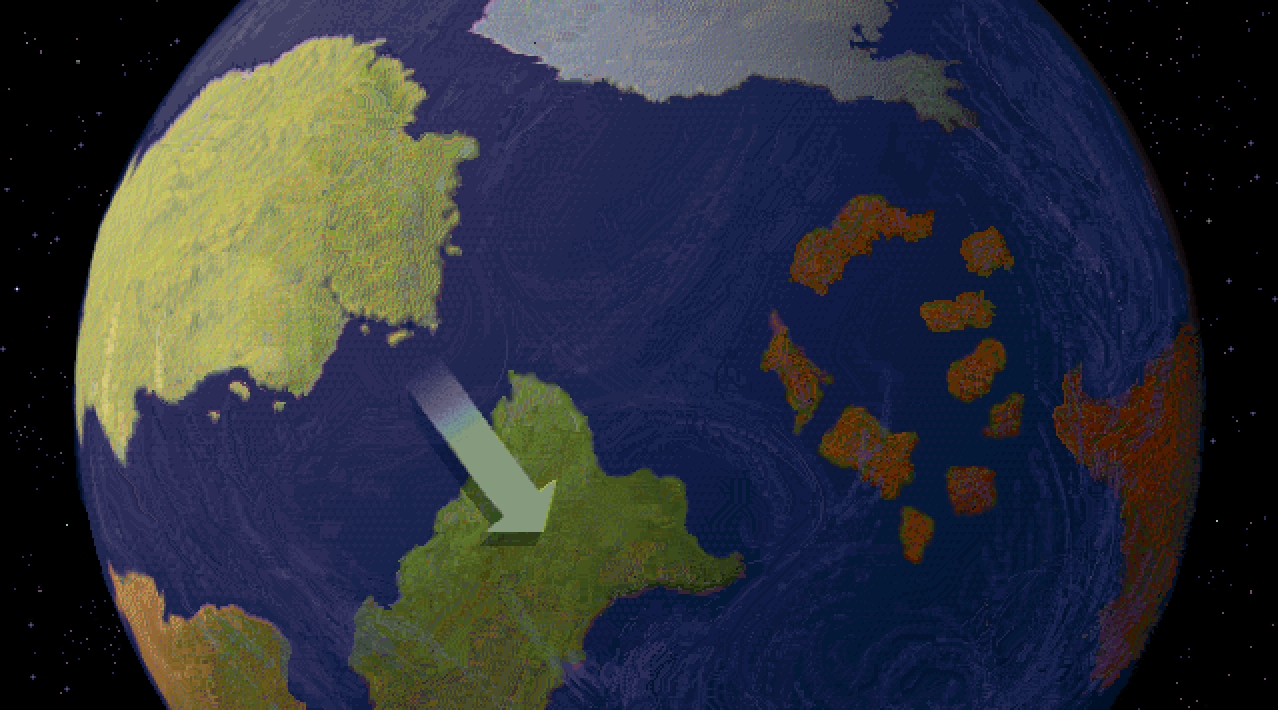 Perhaps the Faustian pact should be less subtle. Like the soldiers who switched sides during WW2 rather than face harsh, uncertain futures in POW camps, perhaps players who suffer a string of defeats should be allowed to change horses mid-stream. Campaign creativity if you please, Owned by Gravity! 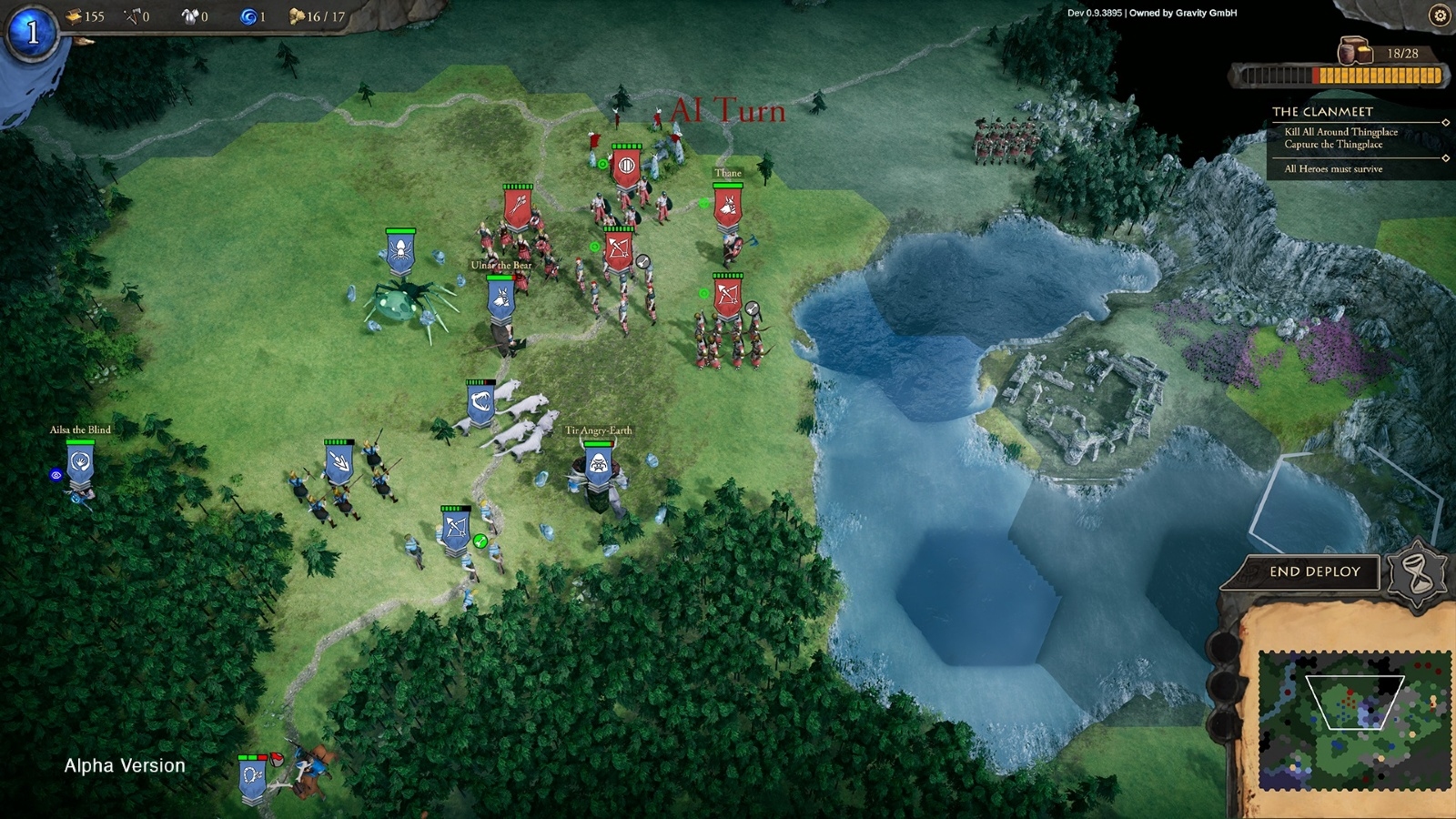 However FG2 turns out, thanks to GOG.com we always have the wonderful original to fall back on. Assuming you aren't averse to the odd campaign restart and don't mind perusing a pdf manual now and again (the “tactical tips” section is essential reading) then it's unthinkable you'll regret spending $6 on Panzer General's lovelier, livelier, less grindy sibling. 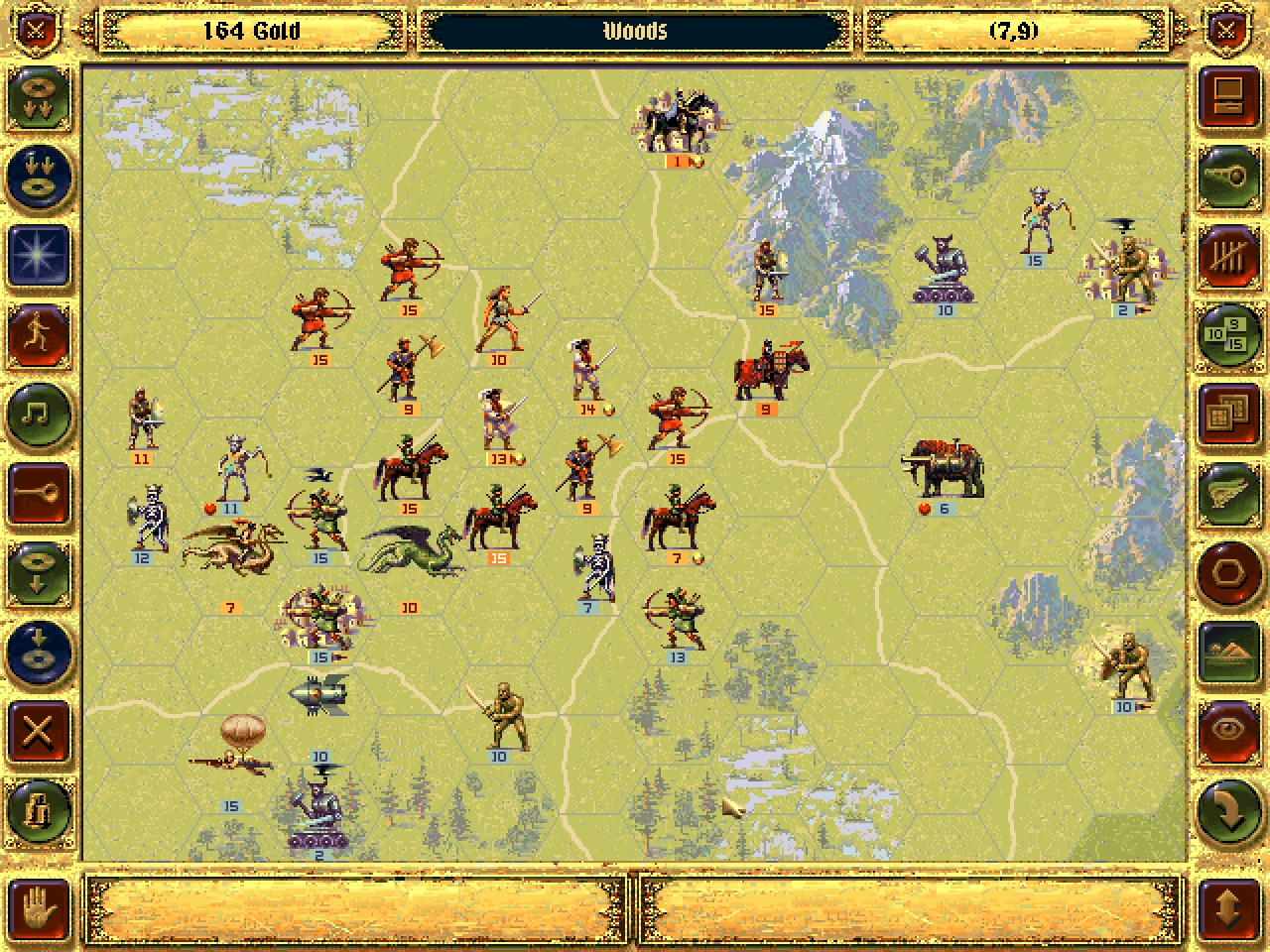