A is for Apology. Sorry. Wordblind and weary after two weeks of non-stop battle narration I very much doubt I'll get as far as Z today. Please spend the time you would have spent Flare Path perusing doing something equally worthwhile such as finishing that design for a solitaire board game about swallow migration you've been working on for the past seven years.

B is for Bare battlefields

There's no sign of Stalingrad in the alpha release trailer for promising multiplayer WW2 armour sim, Steel Gear - Stalingrad. Judging by the above footage and the other vids laagered here the small Spanish team behind this Wolfpack-style project (tanks feature several crewable stations) are concentrating on nailing ballistics and tank models before lavishing attention on complex urban venues. Very wise. Night skirmishes look extremely atmospheric, and reassuringly there's no sign of fogged horizons or glowing AFV outlines. I'm intrigued by the use of the hand compass in some sequences. I wonder - will accurate navigation prove as important as accurate gunnery on Steel Gear's rolling steppe?

C is for Crisis management 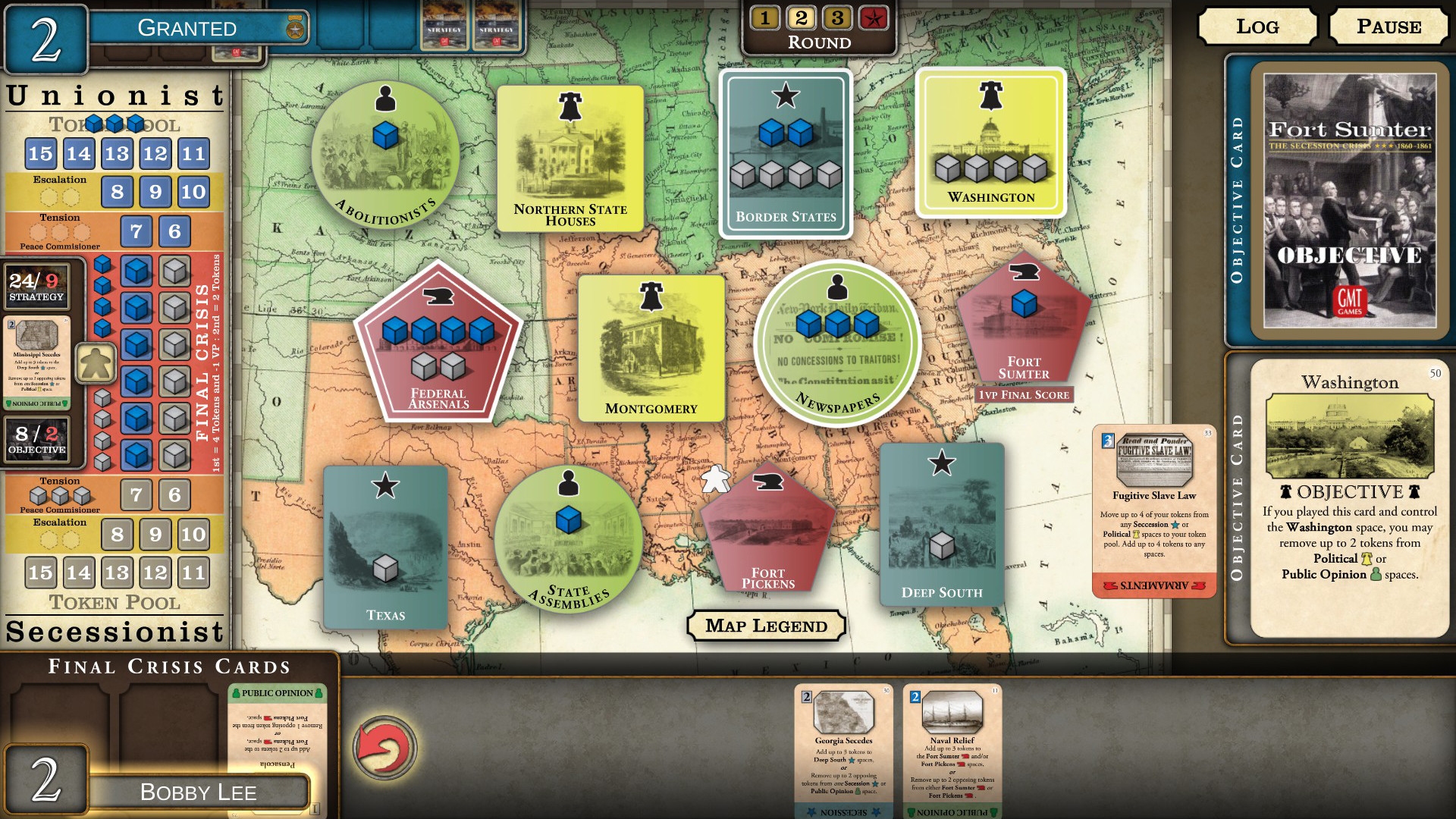 Fort Sumter: The Secession Crisis ends where most American Civil War games start. A digital AI-equipped version of a well-reviewed 2-player card-driven board game, it simulates the period of political manoeuvring that led, via the bombardment of the titular fort, to the outbreak of the ACW. I'm very tempted to give it a whirl. Worst case scenario it should fill in one or two of the gaping gaps in my knowledge of 19th Century America.

D is for Difference of opinion 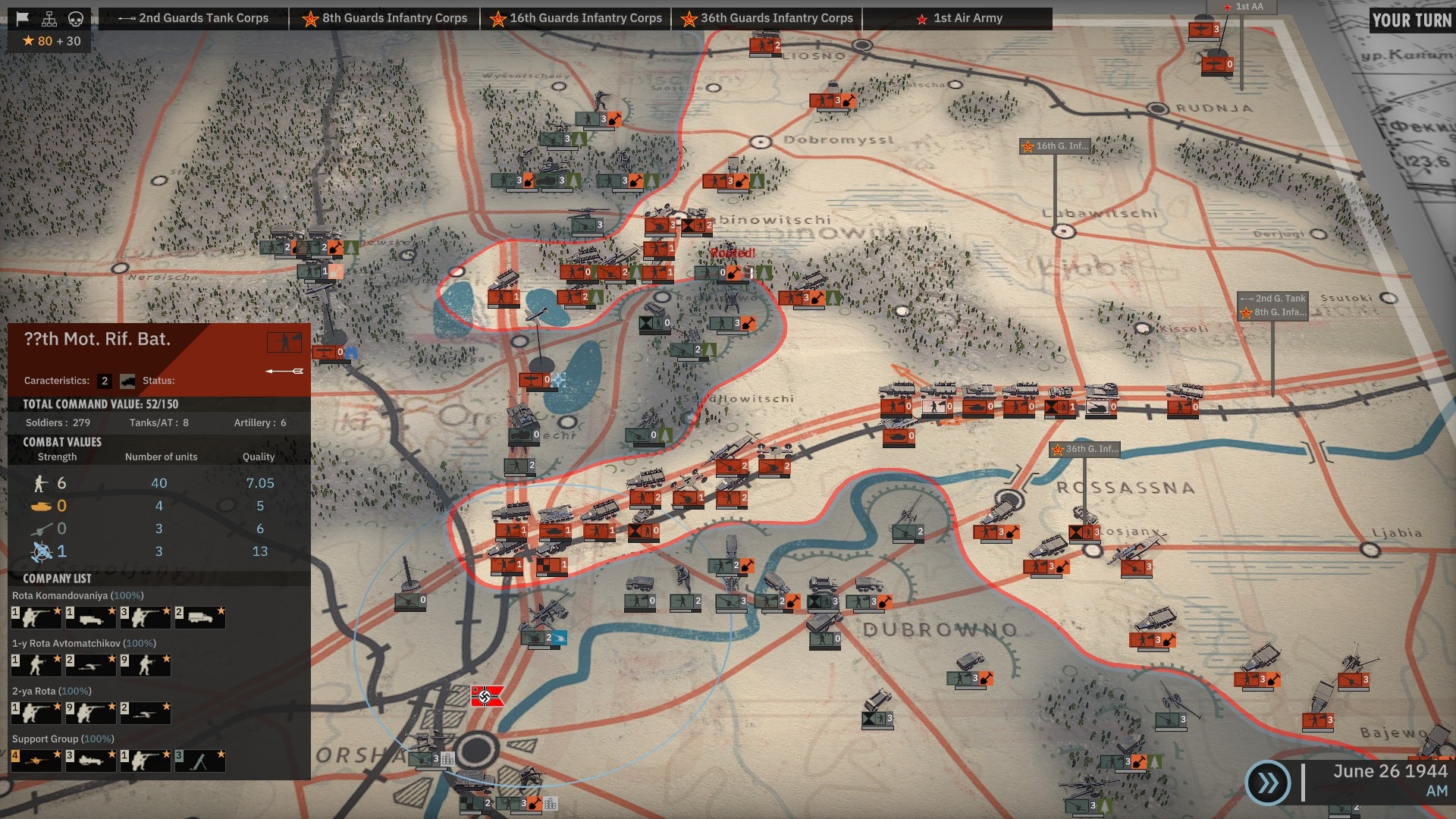 In episode 474 of always-worth-a-listen wargaming podcast Three Moves Ahead, hosts Troy Goodfellow and Rob Zacny duff up Steel Division 2 good and proper. Army General, the groundbreaking campaign mode I heaped praise upon in my first-impressions-piece-cum-review, comes in for particularly scathing criticism, the presenters being profoundly unimpressed by, amongst other things, its woolly approach to unit positioning and the unhelpful/unrealistic way strat map units are fed into tactical battles. While I stand four-square by my enthusiastic June 28th assessment, I can't pretend the observations of the TMA lads aren't thought-provoking.

E is for Extra airframes 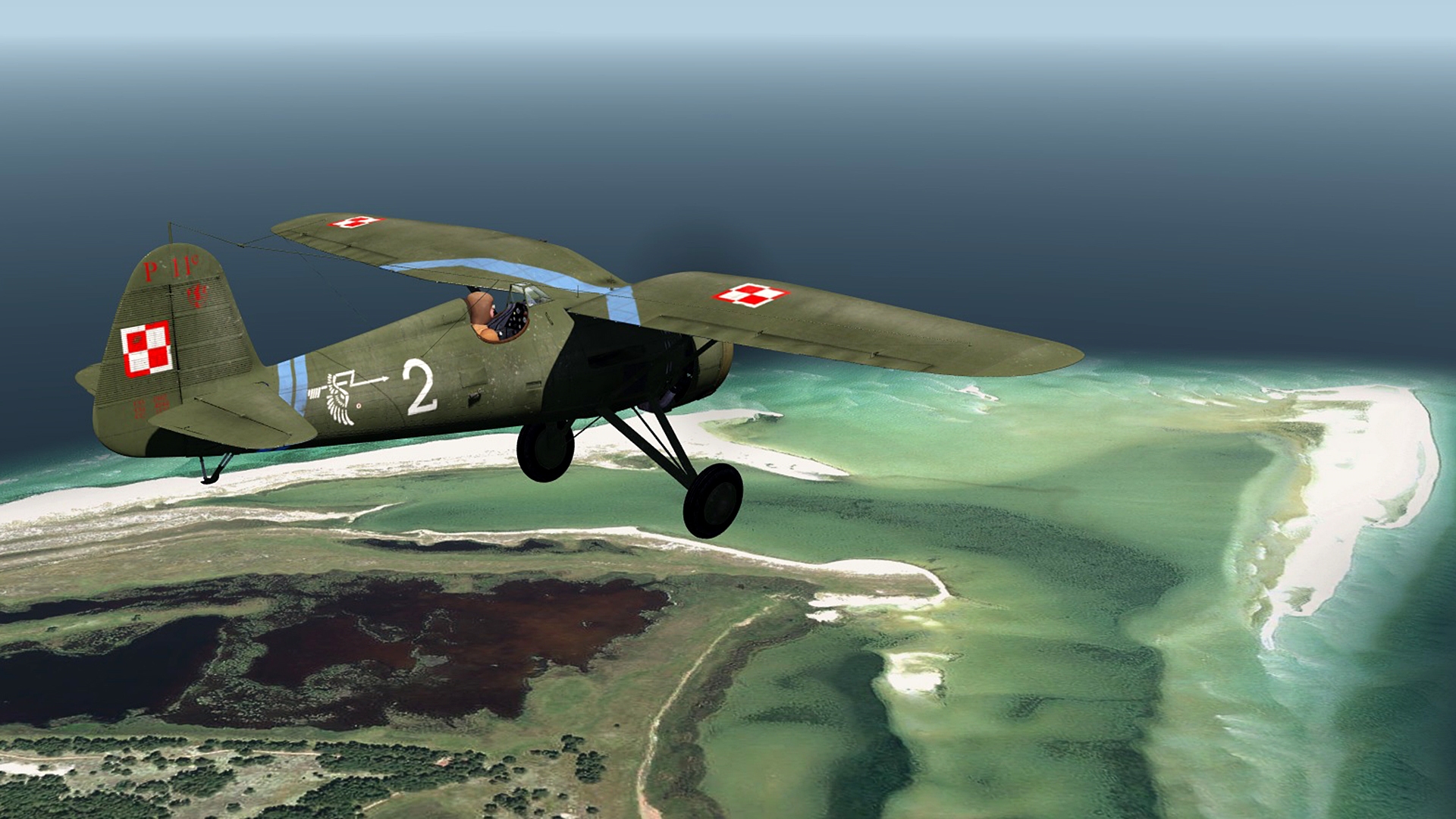 The trickle of freeware flying machines for Aerofly FS 2 is fast becoming a stream. Gratis community-made aircraft now available include a Lockheed Starfighter, a Yak-18T, a PZL P.11... even an Edgley Optica. Much of the exotica is the work of one productive Pole.

To solve today's prizeless brow-furrower, the eggheads that gather in this column's luxuriously appointed defoxing annexe every Friday must identify the five themed picture clusters that lurk in a 25-tile photo mosaic. Maybe you can be of assistance.

G is for Gronk beater 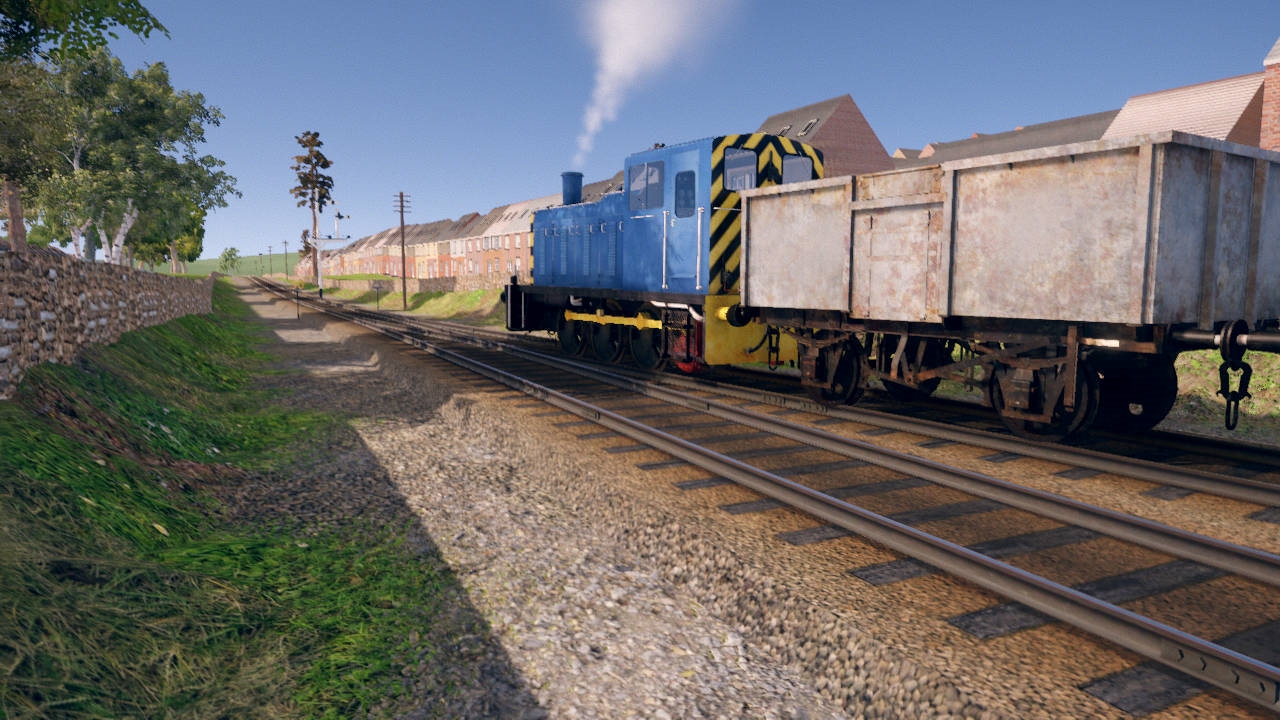 Much cuter than the Gronks that outnumbered them, the Class 03s never failed to put a smile on the face of parka-sheathed Eighties loco spotter Master Timothy Stone Esq. Naturally, I was pleased to see the above WIP image appear with other similar shots in a recent development update post for Diesel Railcar Simulator. Lapioware's brill DMU sim will be getting 03s rather than 08s because the former is diesel-mechanical not diesel-electric. Fudge-averse Oskari doesn't want to simulate electric traction motors until he's good and ready.

H is for Halftrack hard graft 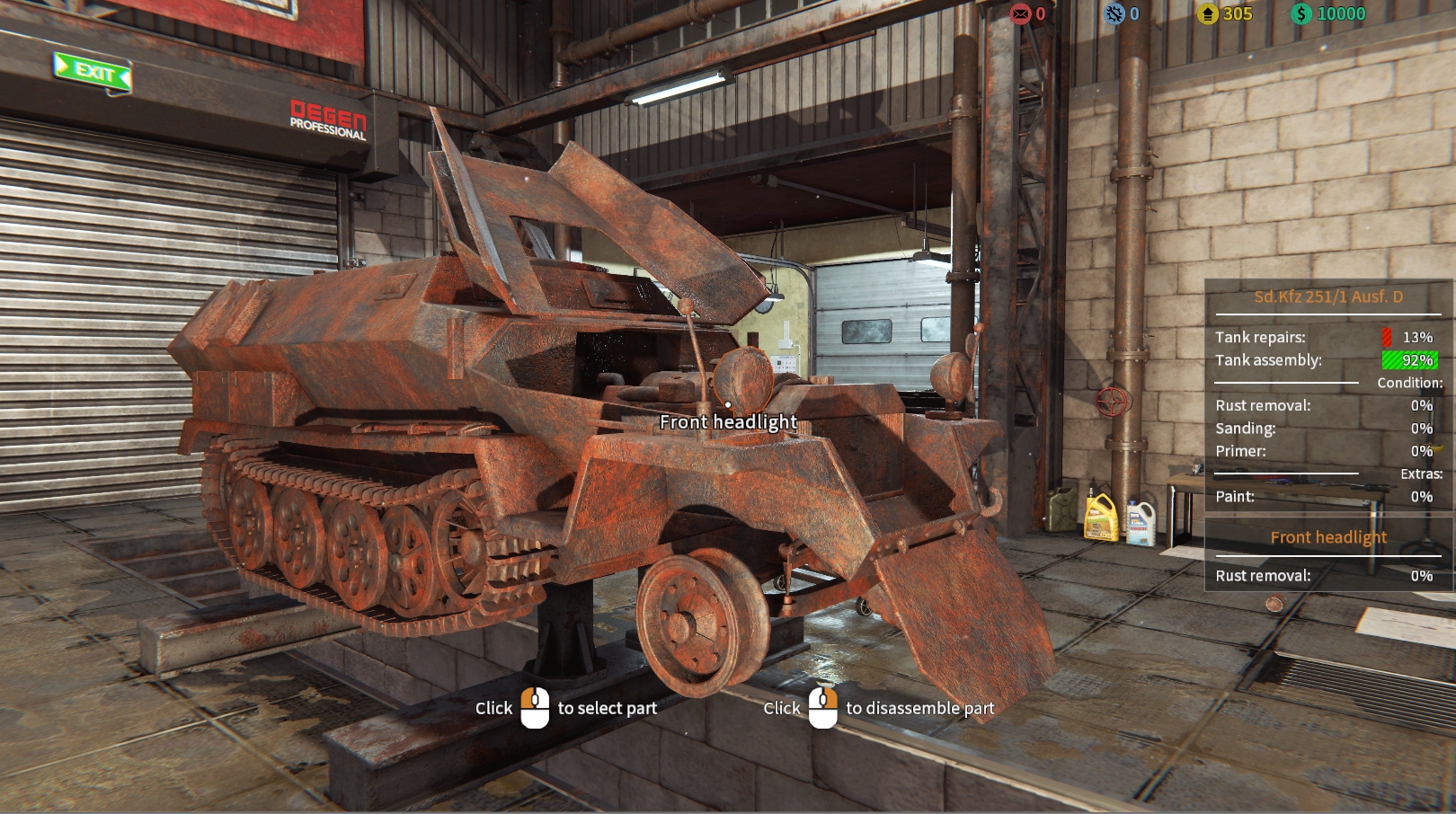 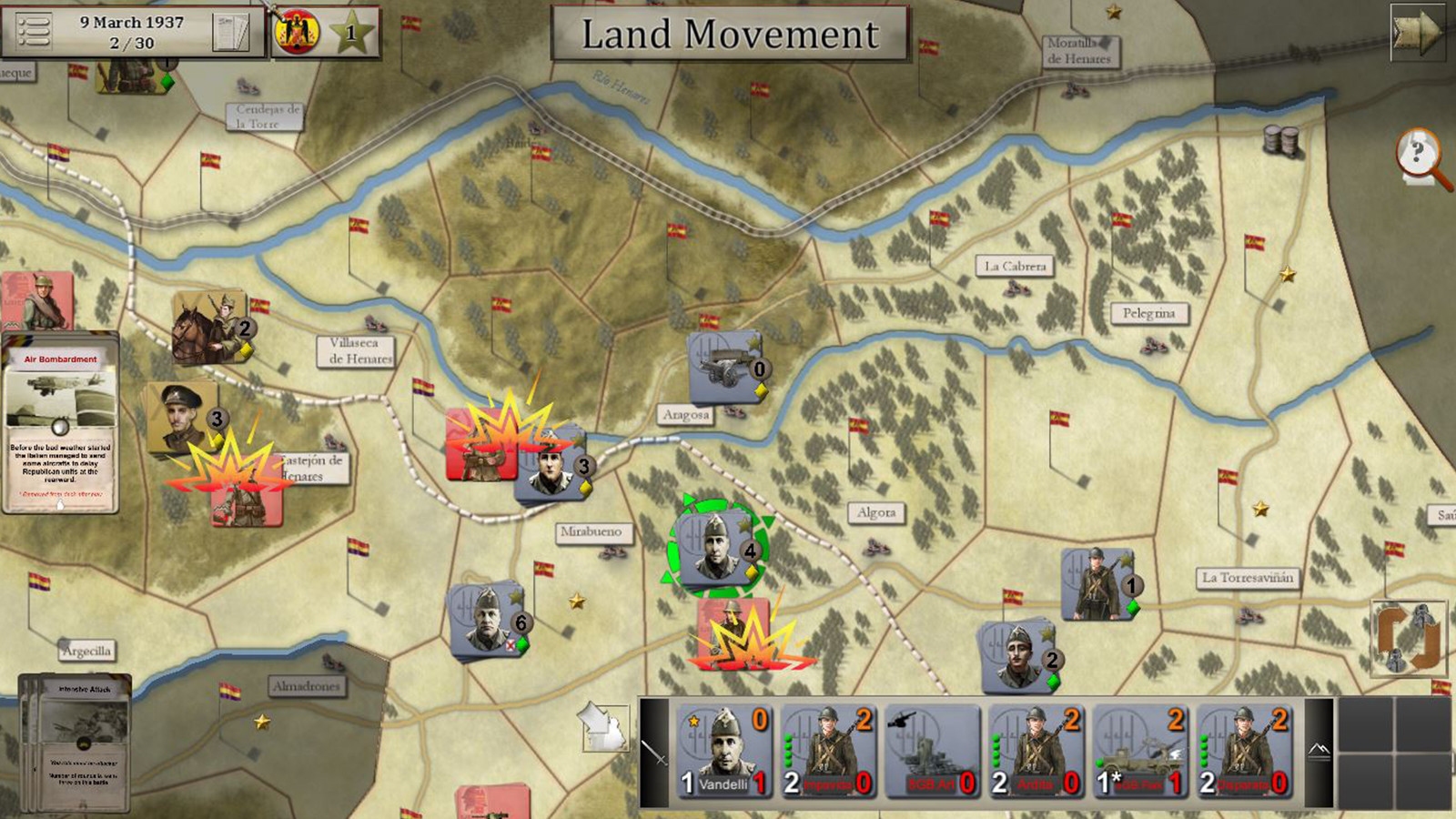 One of the joys of era-hopping TBS Wars Across the World is the affordability of its modules. Releasing a standalone four-scenario Spanish Civil War spin-off at £21 feels daring when standard WatW scenarios retail for £2 a piece. Devs Headquarter S.L. justify Battles For Spain's price tag thus “We have worked on it for a year, researching, designing a new interface, developing, adapting code and working hard with the AI, so it's not pure WatW. We don't want to compete with Paradox, we just want to survive to continue our career of creating games that other companies won't do.” Fair enough. If you'd like me to Wot I Think BFS in a future Flare Path, please make your feelings known in the usual manner.

J is for Jet train

K is for Khalkhin Gol 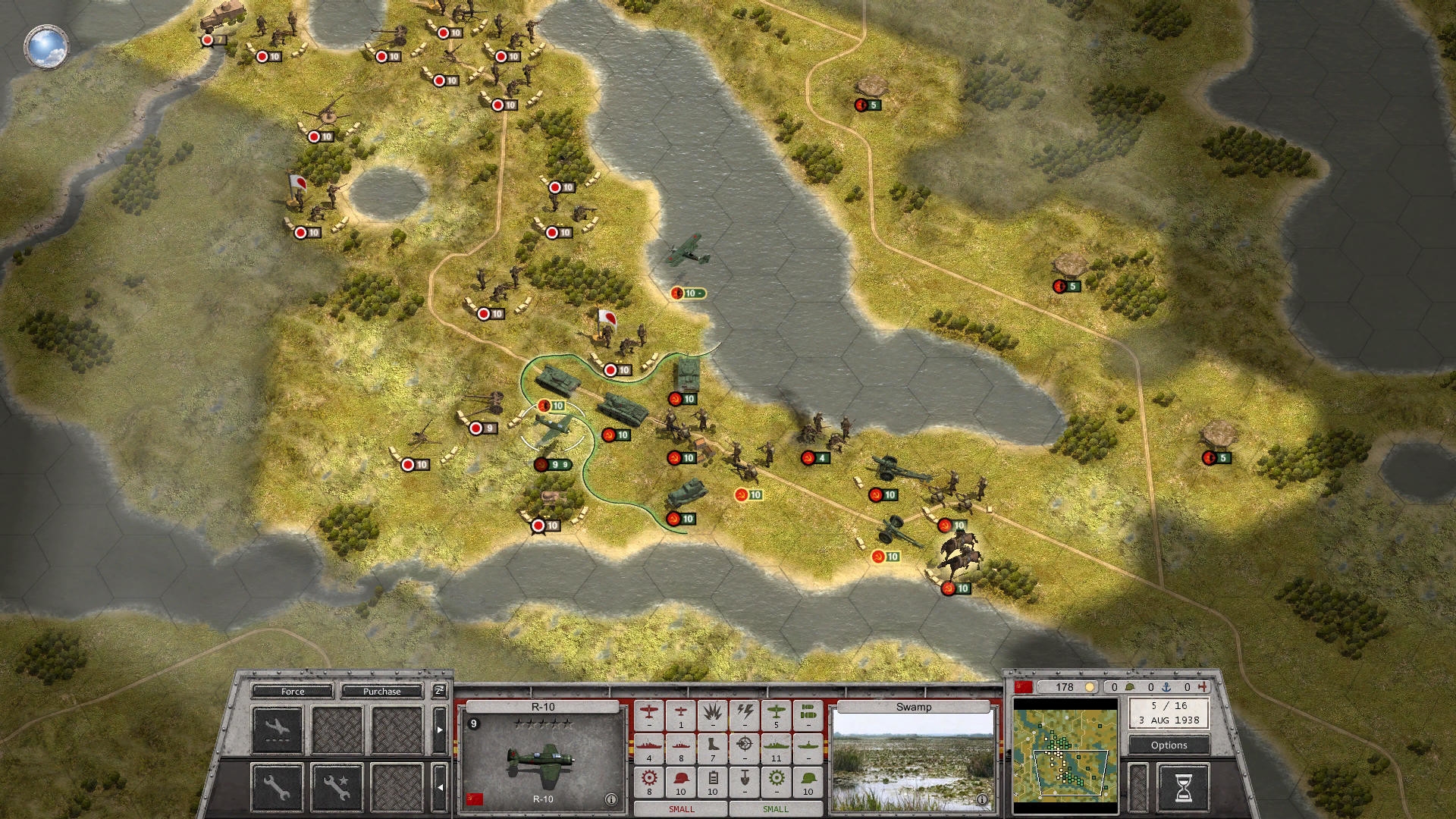 Tired of waiting for Graviteam to finish that Nomonhan game they announced in 2011? Red Star, the latest expansion for free-to-play Panzer General-like Order of Battle explores the same Far Eastern border barney albeit briefly (two of the thirteen scenarios) before shifting westward for more familiar fracases like the Winter War and Operation Barbarossa. Unless the Artistocrats and Slitherine have changed their modus operandi recently, Lake Khasan 1938, the DLC's first scenario, should be playable without payment if you've the base game installed.

L is for Lost moggy 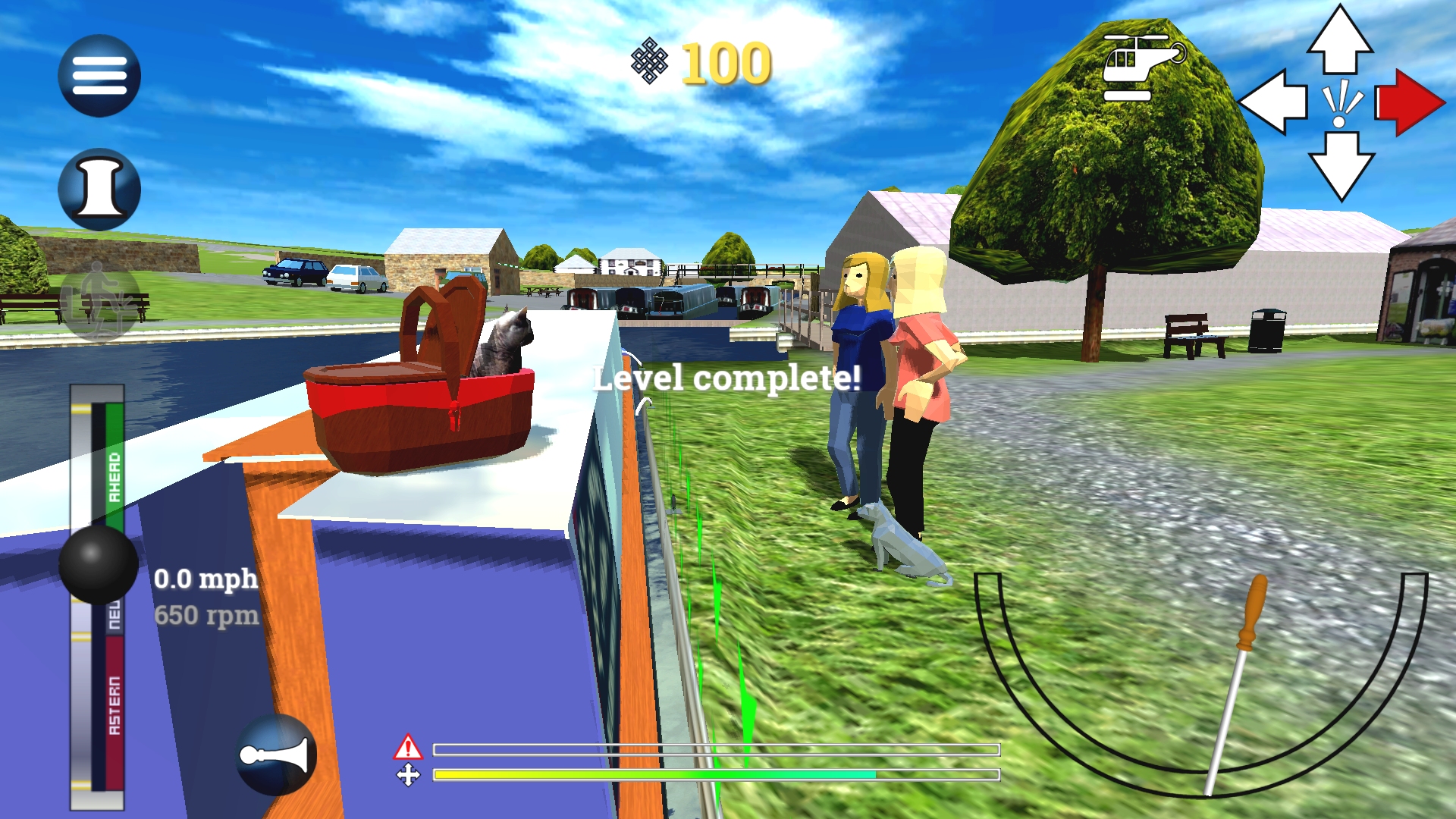 Brendan's list of “good videogame cats” for International Cat Day needs a simulator cat or two. I nominate the lost puss that approaches you while you're eating ice cream beside the Llangollen Canal in Narrowboat Simulator (Returning him to his grateful owners means a trip across the Pontcysyllte Aqueduct, the highest canal aqueduct in the world) and the commuting cat I once hallucinated during an OMSI night shift.

M is for Monstrous moniker 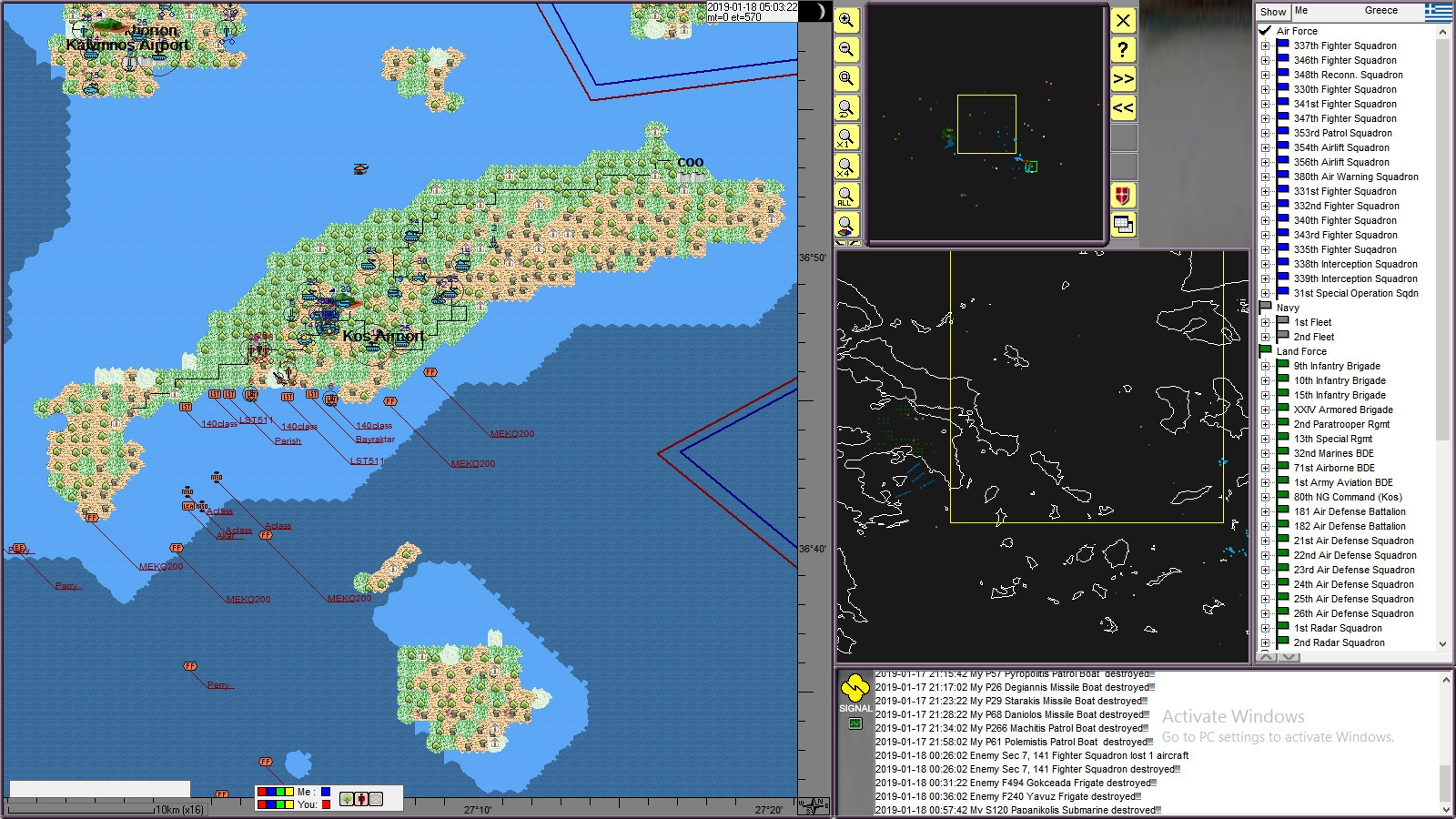 Sand Table Software, you evil monsters! No game, however war-stuffed, deserves to go through life with “Theater Commander: The Coming Wars, Modern War Game” emblazoned on its birth certificate. Released yesterday, the turnless TCTCWMWG combines continent-spanning battlespaces with high unit counts, and - if the Steam blurb is to be believed - elegant controls. Assuming it's as realistic and wieldy as it claims to be then, priced at a mere £7, it should be well placed to poach potential customers from CMANO.

N is for Nostalgia

When I was a kid the heartwarming story of RAF Chinooks battling to save a damaged dam would have inspired a side-scrolling 'flight sim' as sure as eggs is eggs. Careful! Don't hit the clouds (That makes them release their rain, increasing the water level in the reservoir). And mind those power lines and the TV company drones! Those poor marooned sheep down there look hungry. Drop 'em some hay bales for extra points, and, while you're at it, try to flatten that publicity-seeking politician with the mop of blond hair. Aircraft games were different when I was a nipper, and no mistake.

O is for Official recognition

Slitherine has persuaded Ministry of Defence offshoot, the Defence Science and Technology Laboratory, that British soldiers will fight smarter if they do a bit of computer wargaming from time to time. In a deal worth £1.5 million, the Epsomites will be adapting Flashpoint Campaigns, Command Modern Air/Naval Operations and Combat Mission: Shock Force 2 for use by the UK's armed forces. Rob Solly, one of the DSTL staff involved in negotiating the collaboration, is a strategy gamer himself. Commenting on how the games will be employed and what advantages they have over “traditional analytical tools" he said this: “We’ll use them with our own data and scenarios to provide better ways of visualising military problems. The benefits are accessibility and ease of use, and the amount of existing users there are. For example, we’ve been able to train users quicker by going out to DSTL staff who have played these games and training them to use them in a professional capacity. We’re always looking for things to give us a wargaming edge. These games help us to think more creatively around issues.”

P is for Panda option 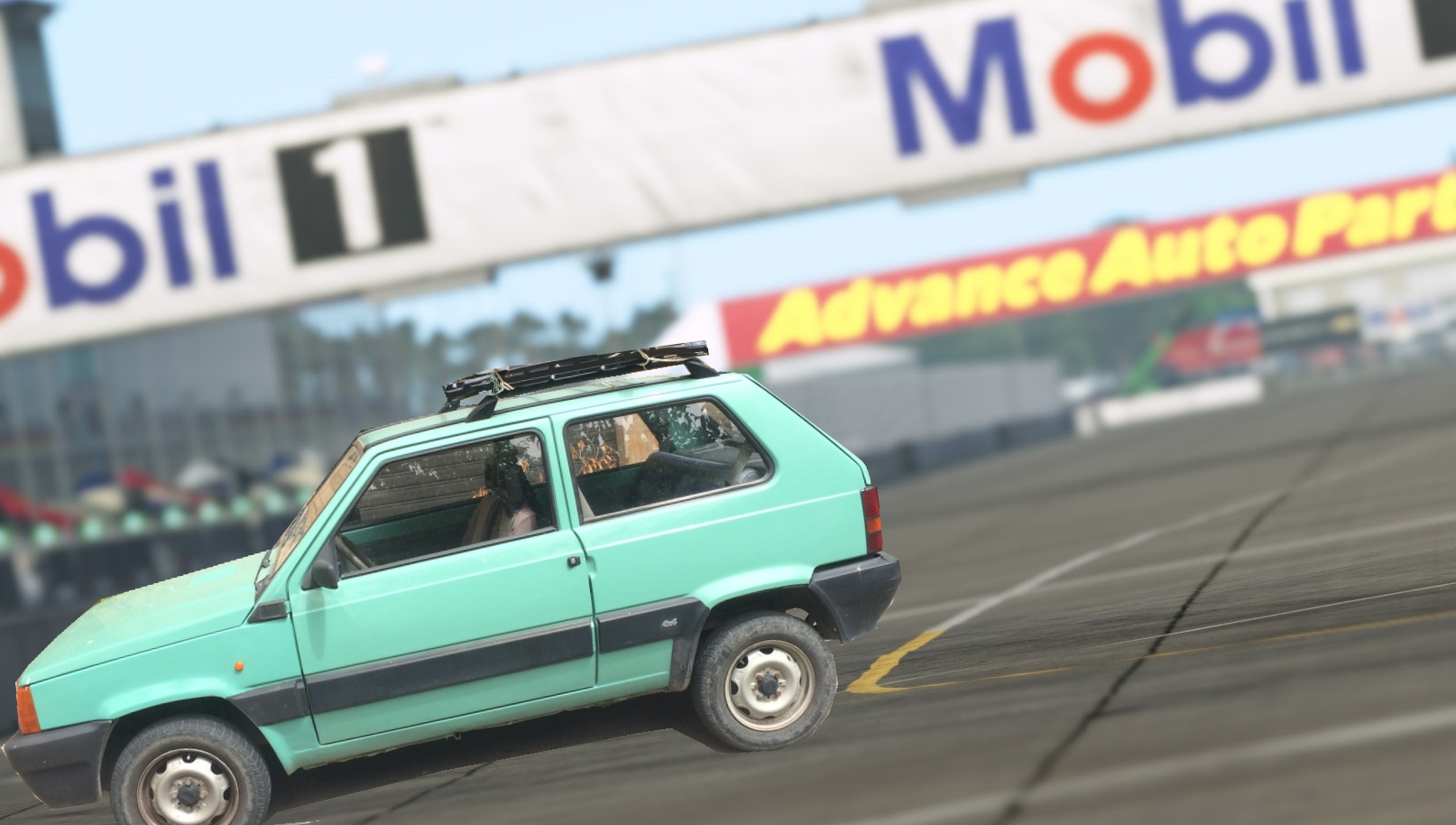 Having won the rFactor 2-utilizing 'World's Fastest Gamer' competition three years running, the organisers have asked me not to enter this year or do all my racing in reverse in a knackered Fiat Panda. I've decided to go with the Panda option and, at the risk of sounding conceited, still fancy my chances.

Q is for Quick teabreak followed by long nap