As Taosoft haven't got around to releasing any screenshots yet, or writing any code, or learning how to code, I'm using a grab from Fishing Sim World - or Fishing Sim World: Pro Tour as it's been known since yesterday - to illustrate this important story. 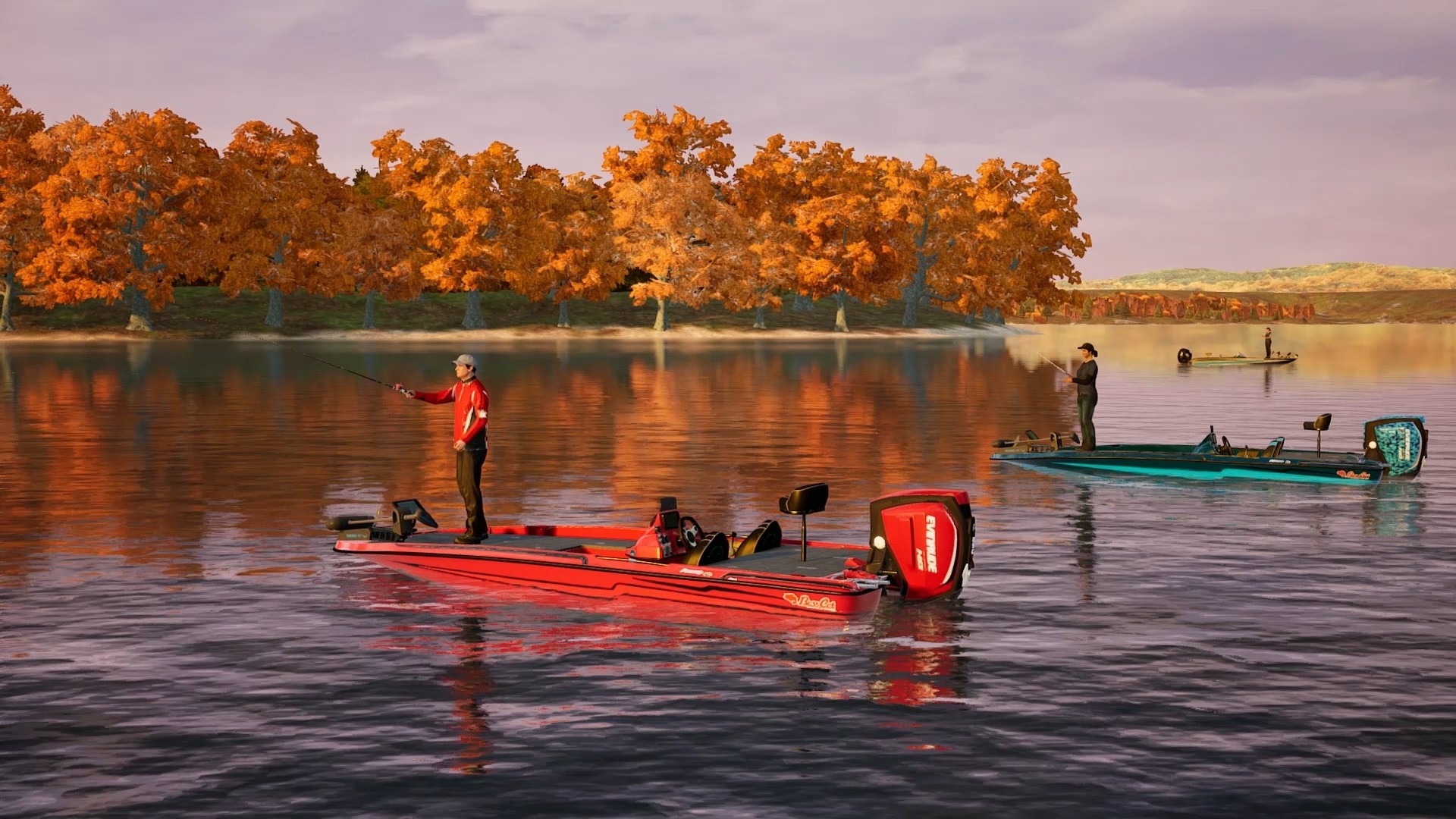 Dovetail, as is their wont, have been fiddling with monikers again! The good news is Fishing Sim World's new title comes with lashings of new gratis content. The sim that I didn't like quite as much as Fishing Planet when I last tried it, now features 29 different fish species, 10 lakes, 48 lock-up garages'-worth of branded equipment, and a PVE league peopled by facsimiles of various logo-plastered professional fish botherers. Perhaps it's time I took a second look. 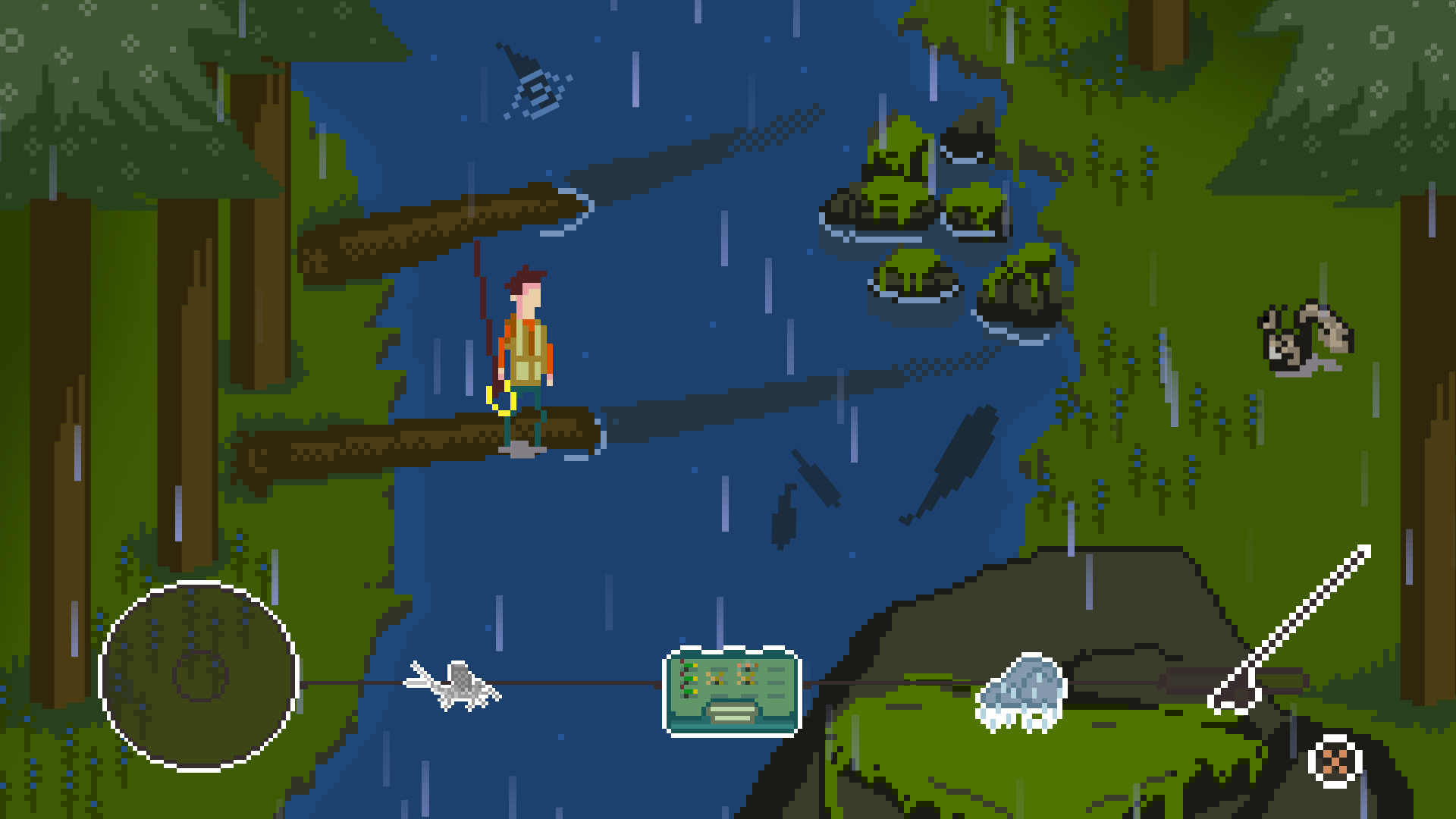 ...and not just because Dantat Studios founder Brian Chau tells me his due-soon debut project was inspired by a piece I penned for RPS back in 2008...

“I was in graduate school at the time, deep in my studies, and hadn't played a fishing game in ages. Thanks to your post, my eyes were opened to the world of indie fishing simulations, and I dove right in, much to the amusement of my roommates. Real World Fly Fishing became a fast favorite, one I still play to this day." 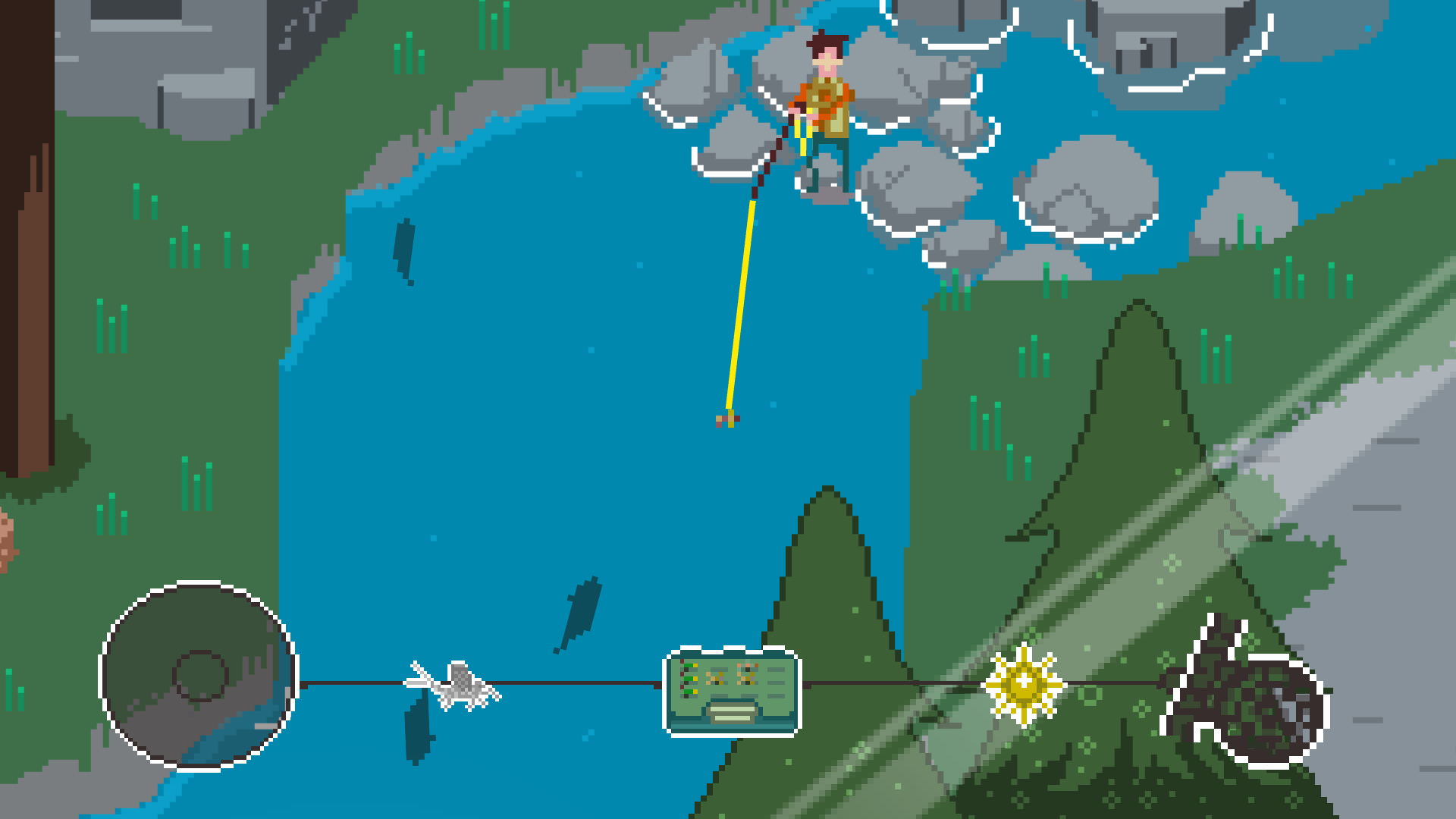 "Additionally, your post planted the seeds that led to me eventually creating my own indie fishing simulation. one that is nearly ready for release. Named "River Legends: A Fly Fishing Adventure", it's a retro angling game with deep fishing simulation mechanics hidden behind the custom pixel art.” 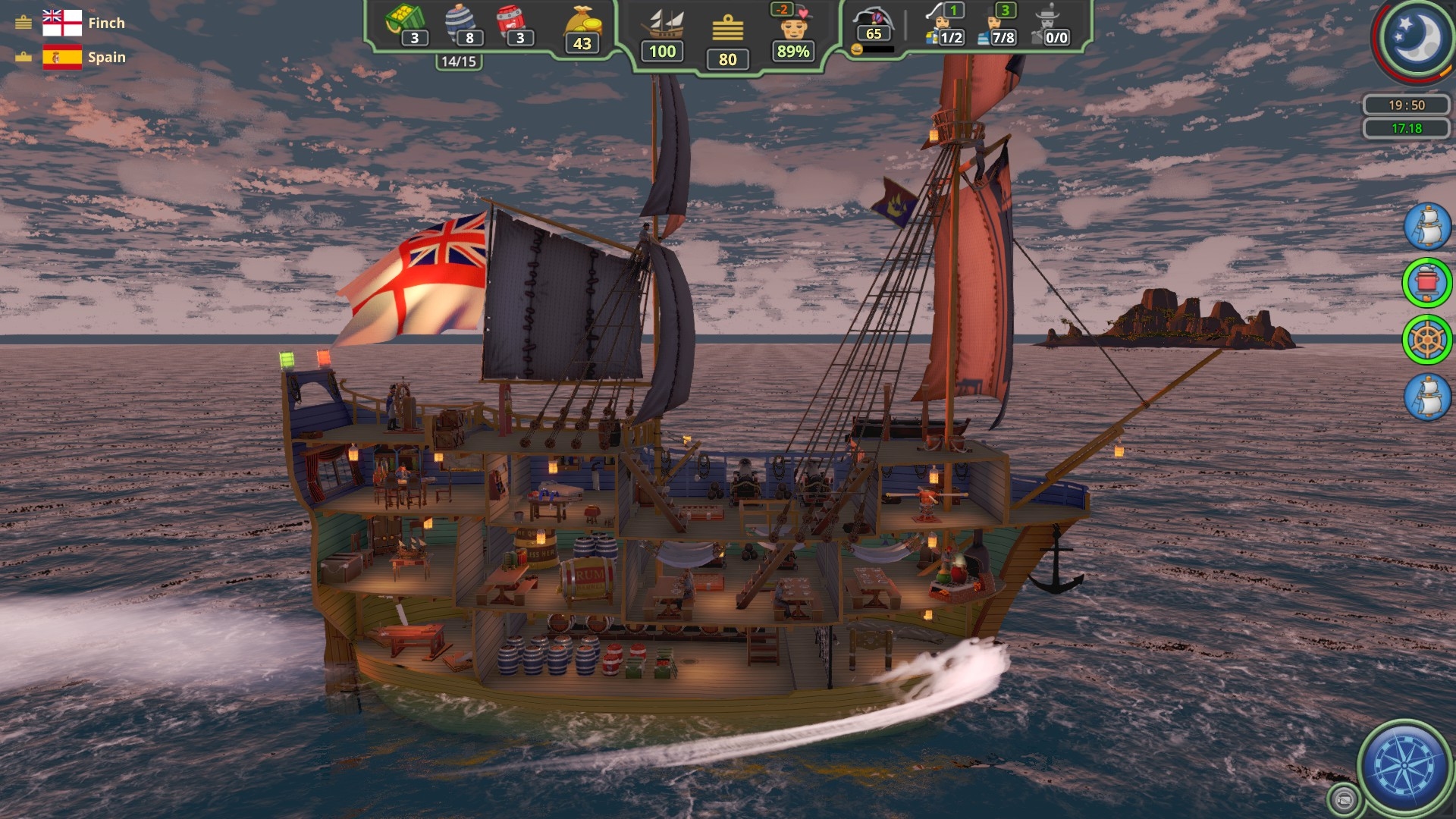 Her Majesty's Ship sailed into a squall of scathe soon after leaving port on July 12. Every Single Soldier's hectic Hornblower-em-up is by no means flawless, but the early battering it received at the hands of impatient Steam reviewers, some of whom unleashed broadsides after less than an hour's play, struck this entertainment prodder as unjust. 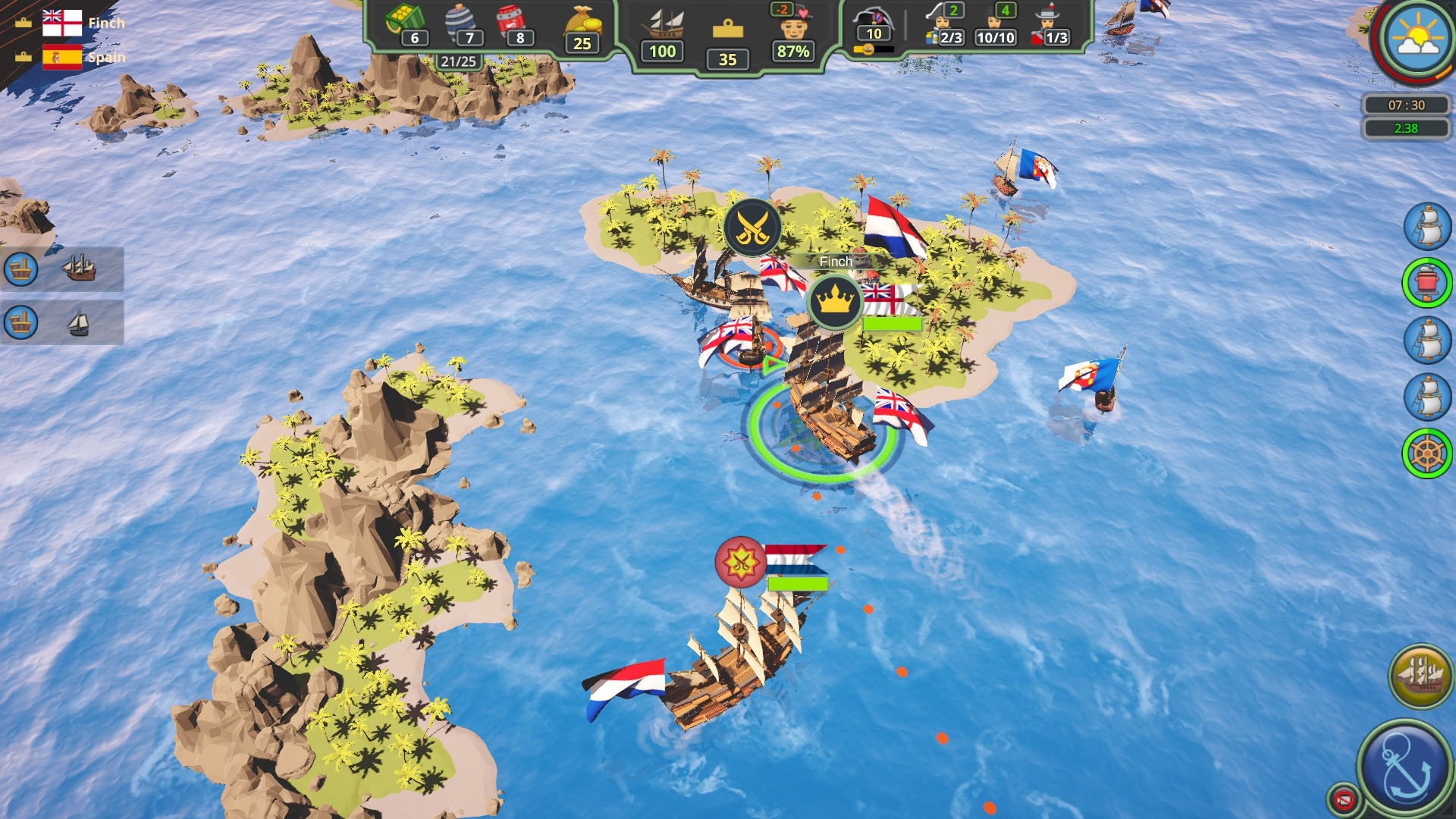 In the cruelest off-the-cuff assessments the game's mandatory busyness is mistaken for a lack of depth - an absence of decision-making opportunities. “Just a bunch of timed tasks forcing you to click stuff, whether you want to or not. I didn't feel like I made a single actual choice while playing”... “A boring click fest where you actually have very little to do except click, click, and click some more.”... “There's no kind of strategic feel whatsoever”. Ruddy potshots such as these must have mortified the developer as HMS is, like the wargames that preceded it, chock-full of meaningful decisions. 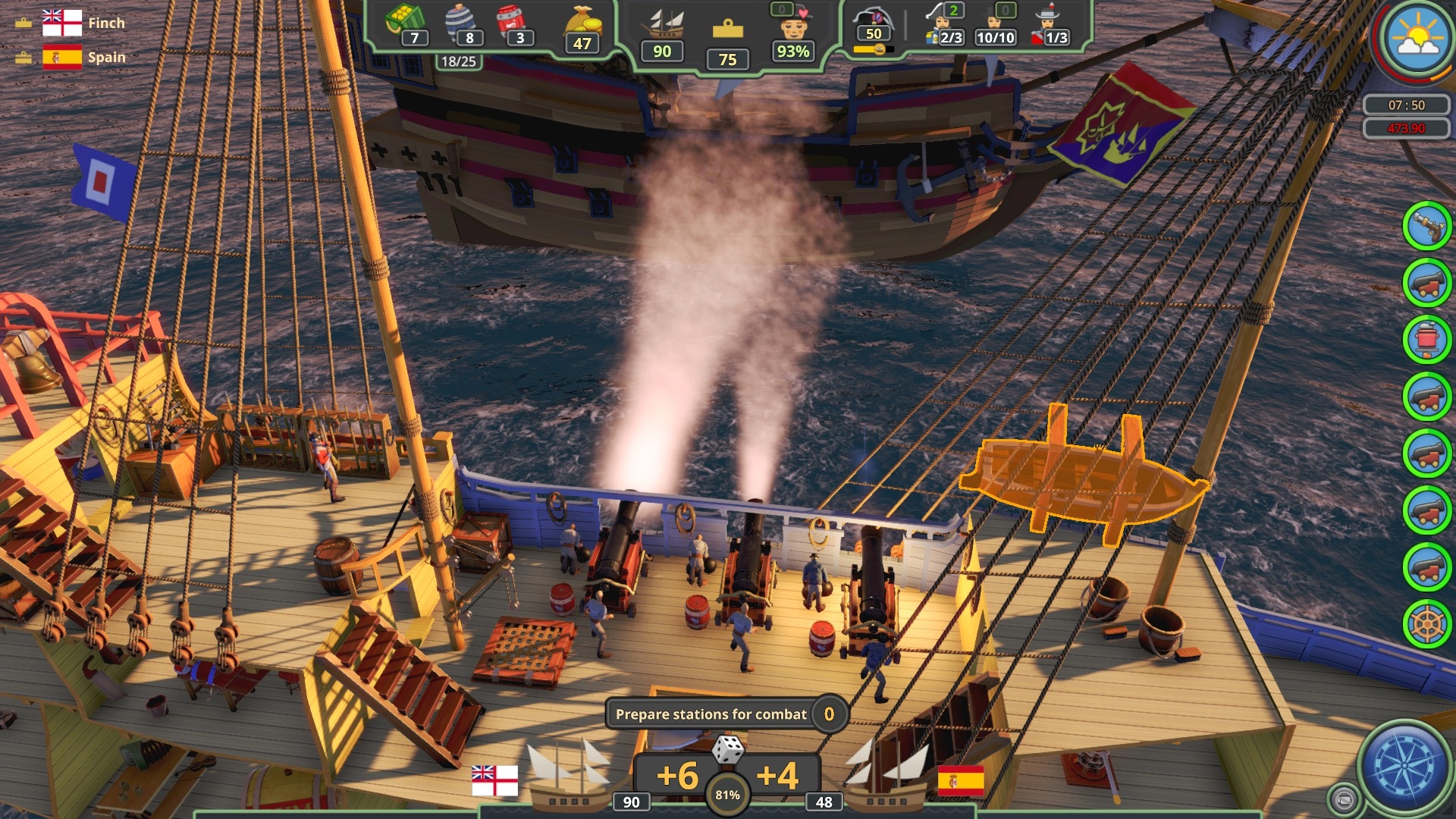 Criticisms of uninspired combat and a 'midshipman' difficulty setting that might be more accurately labelled “martinet” are, on the other hand, entirely valid. Since I wrote my preview, the enemy captain you must beat to admiral rank or abruptly lose the game, has become far too capable and ambitious. The calls for a tactical pause or an 'endless' mode in which careers can proceed without constant, arbitrary pressure to outstrip an unnamed foreign rival, are, in the circumstances, unsurprising. 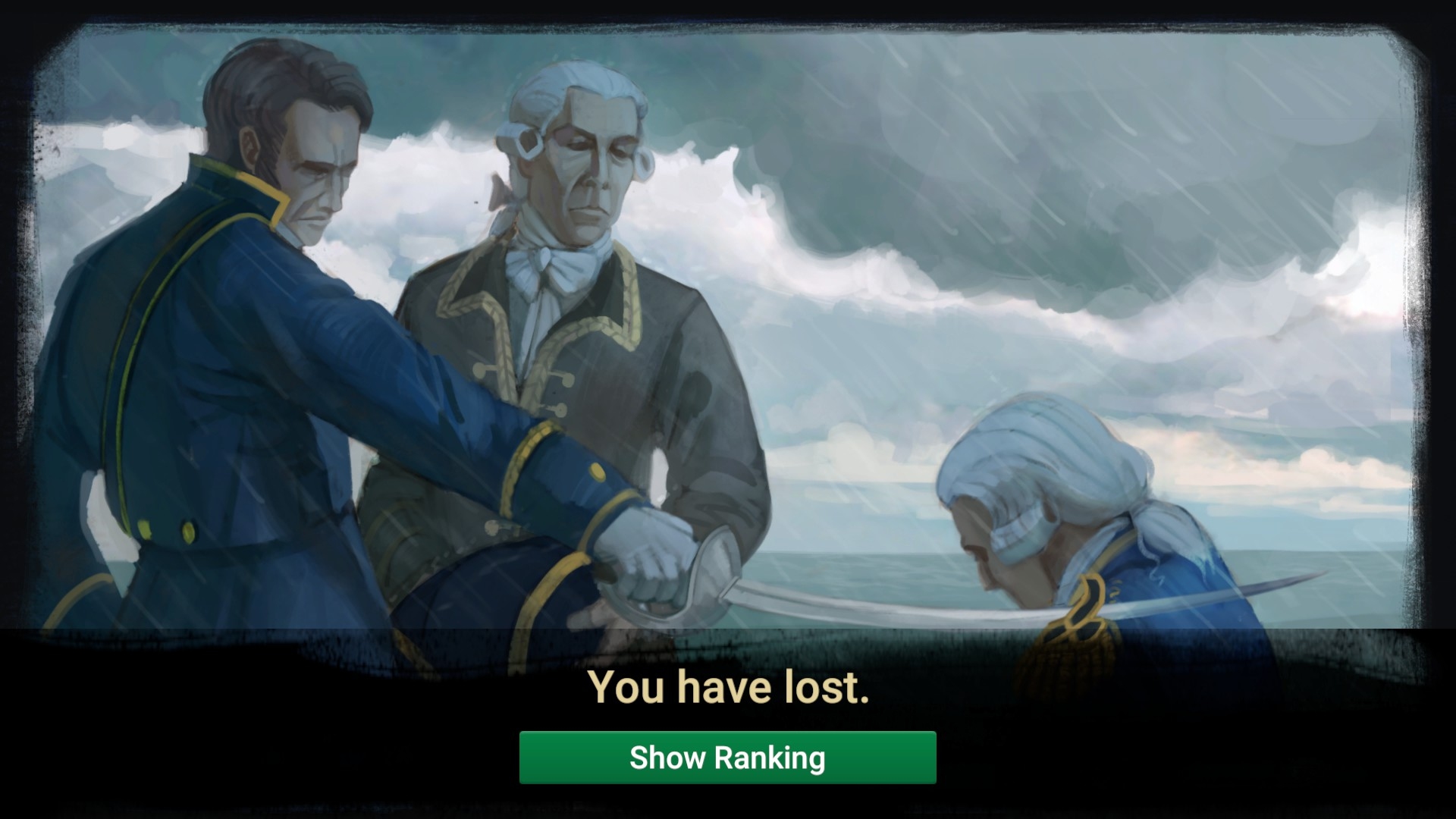 Quirky, genre-ambivalent, and, in its unpatched form at least, pretty unforgiving, HMS is precisely the kind of game that Steam's refund rules and review system can conspire to scupper. Happily, in this instance the ship looks to have weathered the typhoon. Although the store page still sports more red hands than a hard-at-work Napoleonic field hospital, blue ones are beginning to challenge the negative narrative. If Every Single Soldier can enliven combat and persuade the above screen to appear less promptly, HMS sales may get a second wind. 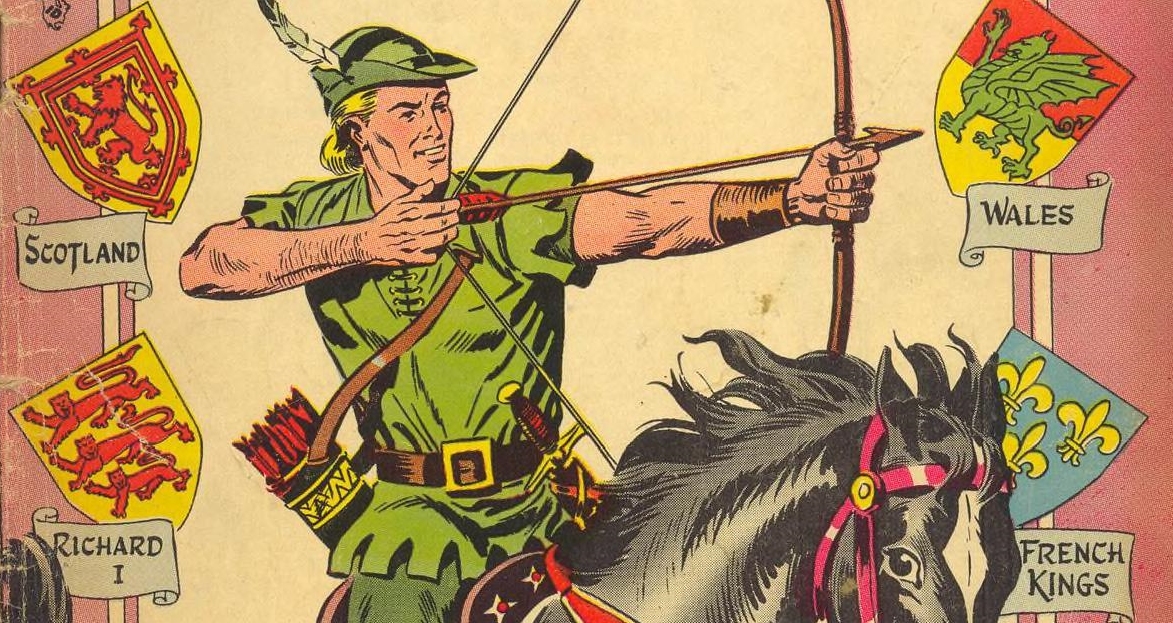 Brought up on the edge of a pine plantation, I've been playing Robin Hood games for as long as I can remember. In addition to making me indestructible wooden aeroplanes, my Dad designed and built a spectacular 1:32nd scale castle, the battlements of which were regularly depopulated by a Kellogg's Robin of Locksley. He also equipped me with a boy-sized yew* bow and a leather** quiver. Armed with these I ambushed countless Norman dogs and rescued I-don't-know-how-many Merry Men from the hangman's noose. 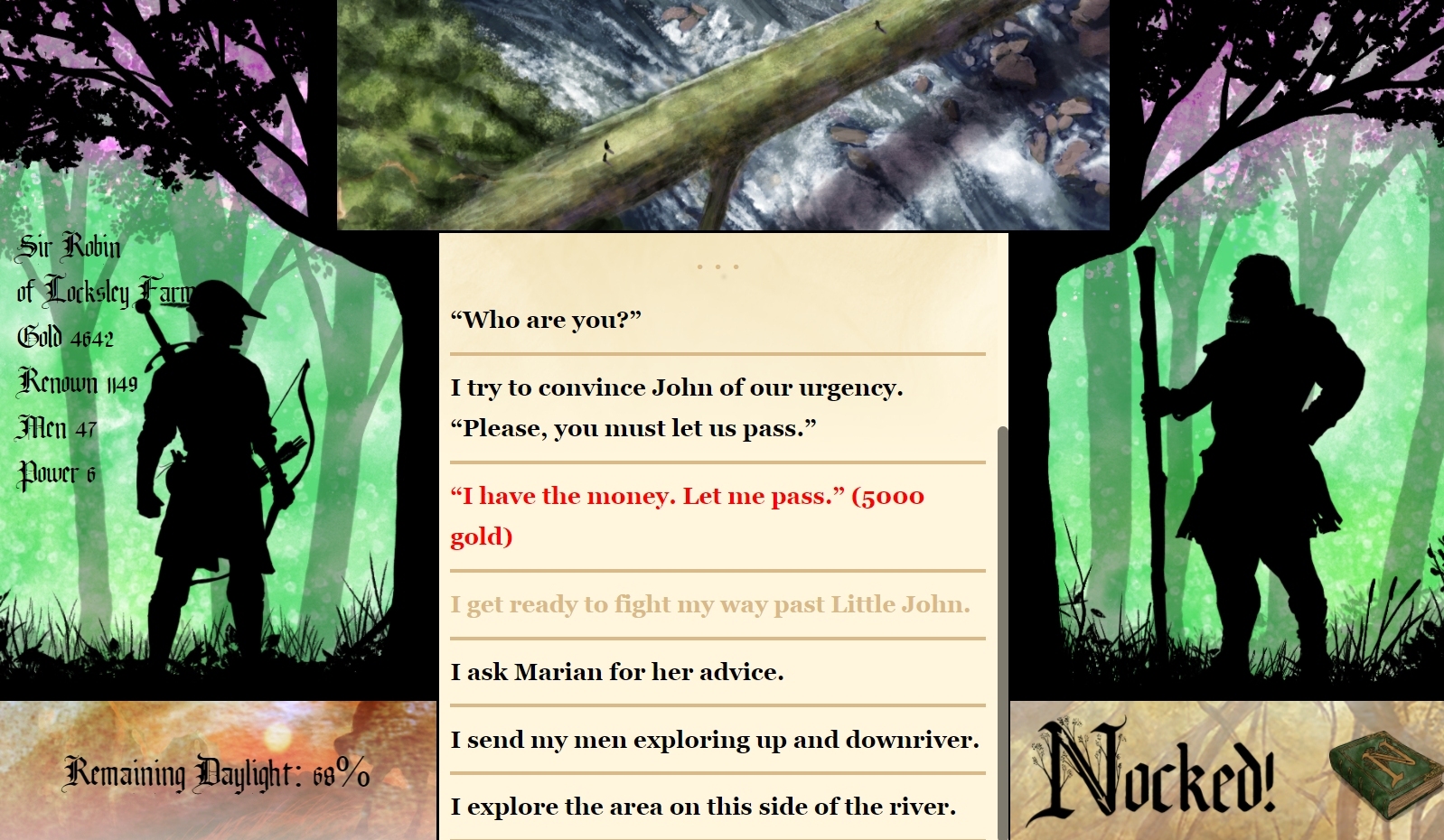 Nowadays my wolfshead antics are largely confined to computer-generated greenwoods. I find myself drawn to all Sherwoodware, even to bizarre, text-reliant, strategy-ribbed RPGs like Nocked. 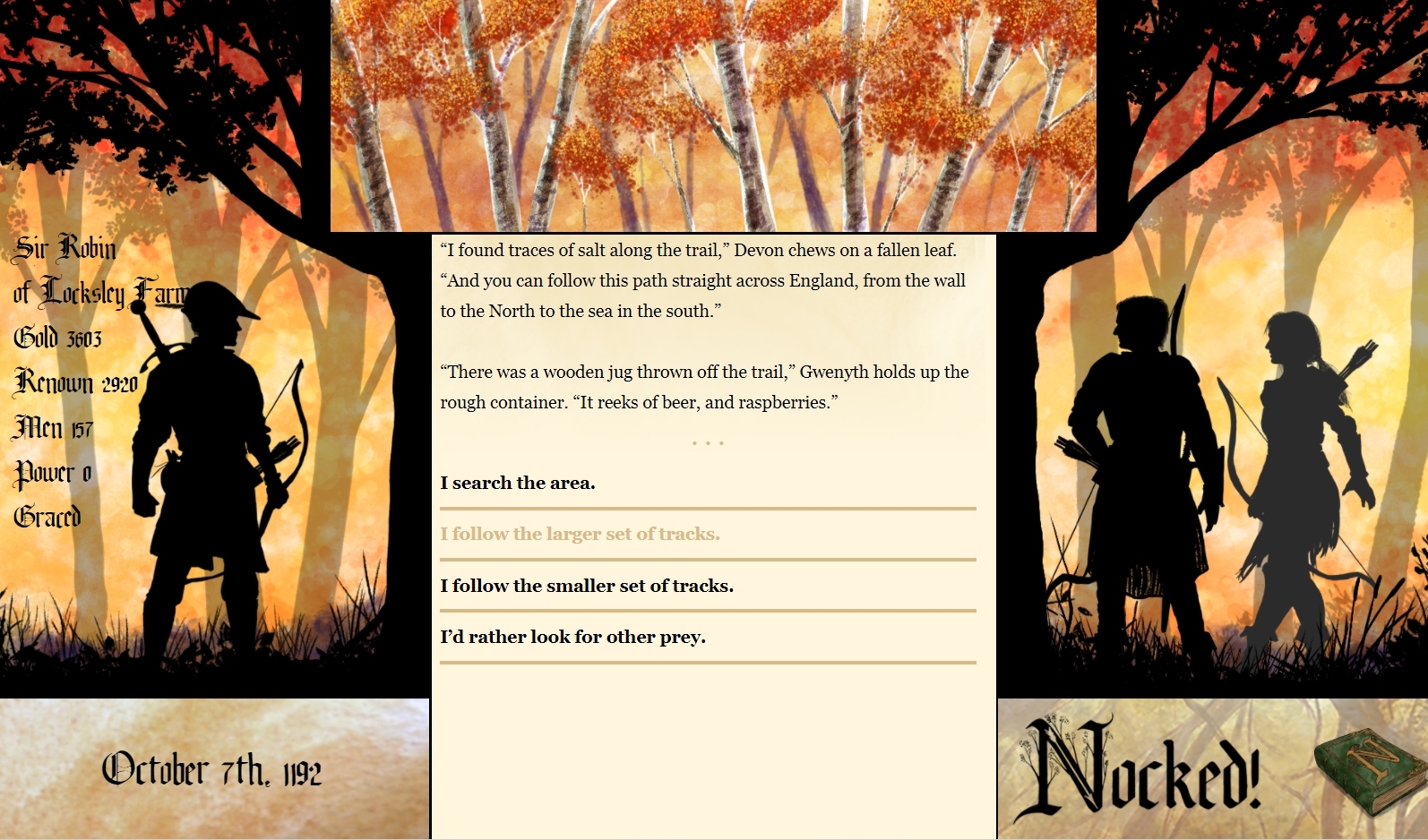 Six years in the making, Nocked! True Tales of Robin Hood seasons the familiar tale of the principled Nottinghamshire wealth redistributor with more supernatural shenanigans than I expected or, if I'm honest, desired, but I've found myself warming to it all the same.

Though writer Andrew G. Schneider is no Howard Pyle or Robert Louis Stevenson, his scribblings are sufficiently flavoursome and free of inept embroidery to keep me coming back for more. The few clumsy phrases (see above) and anachronisms (Marion “freshening up” before a meal and munching “toast” for breakfast...) turn up infrequently enough not to taint a fast-paced, playful narrative that is closer in spirit to BBC TV's Merlin than it is to either of my favourite Hood interpretations. 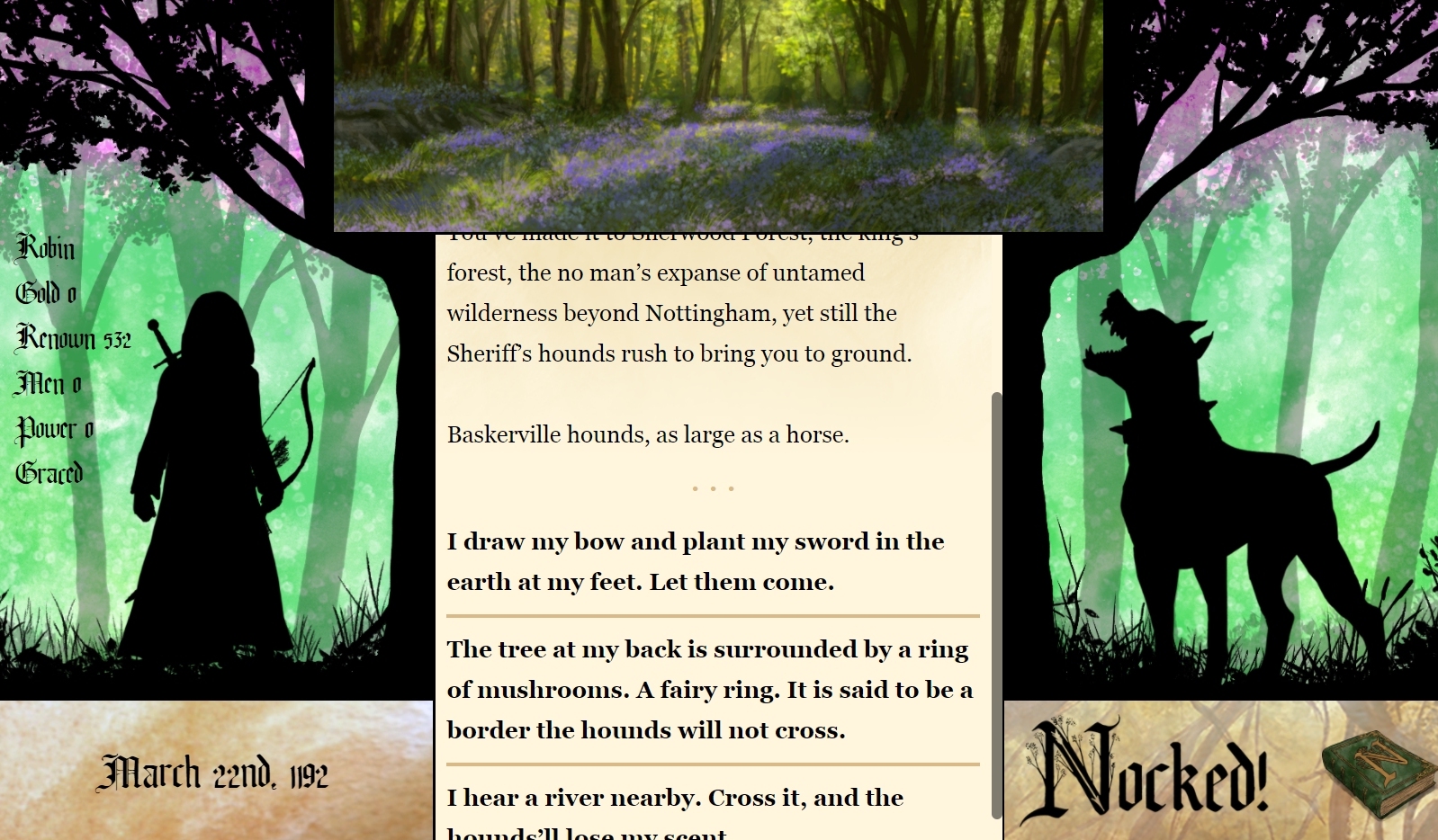 Nocked's version of the RH story contains all the canonical characters and situations plus a sizeable dose of magic and whimsy. A cast of familiar peasants, nobs, travellers and churchmen intermingles with a small contingent of fantastical creatures, ghosts, Arthurian figures and even the odd canine refugee from a 19th Century detective novel. The fact the synthesising never feels forced is a testament to solid storytelling. 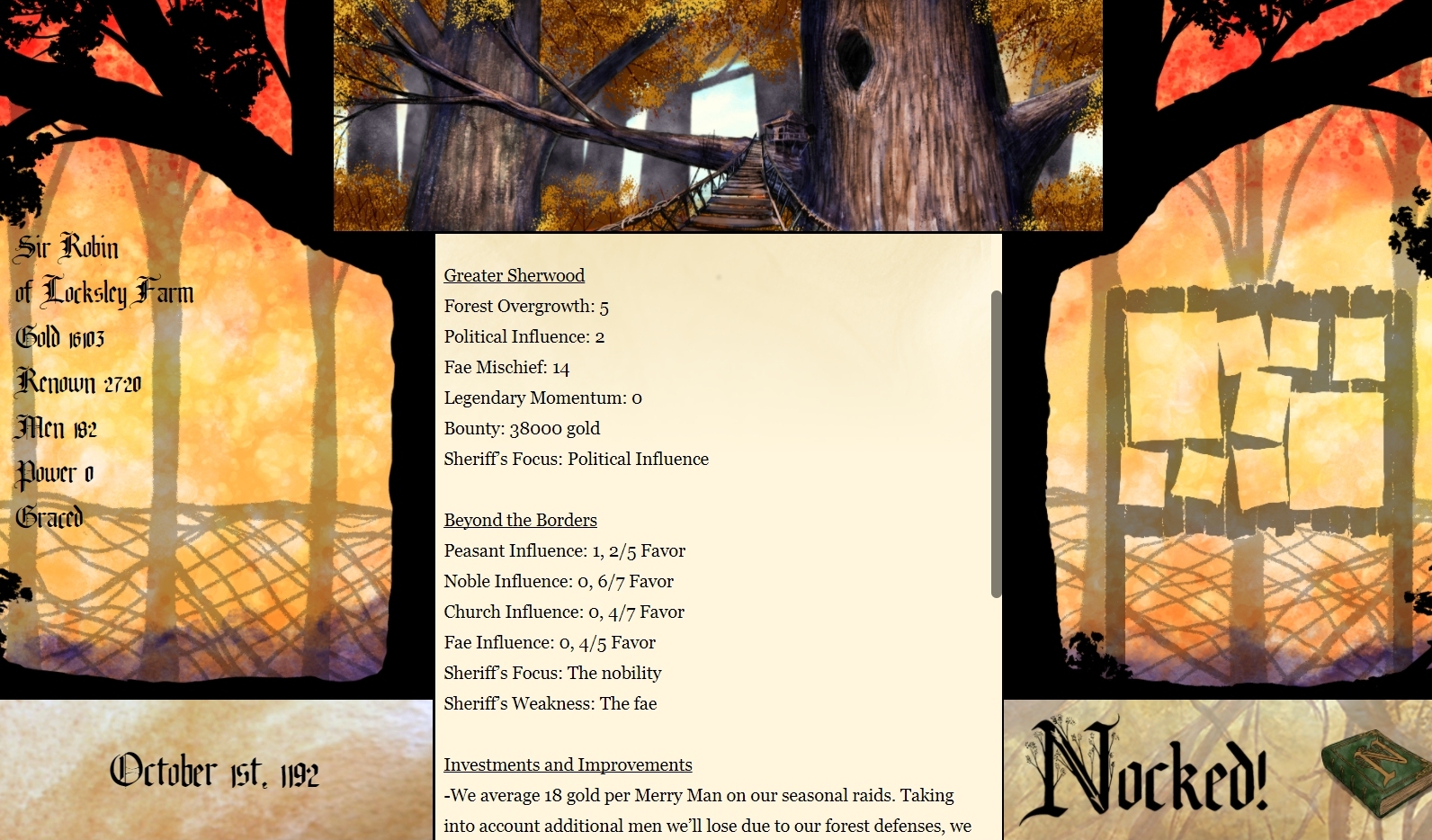 Chances to impose yourself on that story come thick and fast and are rarely binary. Sometimes the impact of a particular choice is spelled out in gold, manpower, renown or one of the other stats that underpin the action; more usually it's up to you to read between lines, deduce, and back hunches. Once you've picked a base location, you can - resources permitting - set about building a range of structures that influence things like recruitment, combat chances, magical knowledge and faction relationships. Missions can be researched and executed, potential allies courted. Under Nocked's wordy carapace lurks a surprisingly elaborate strategy game. 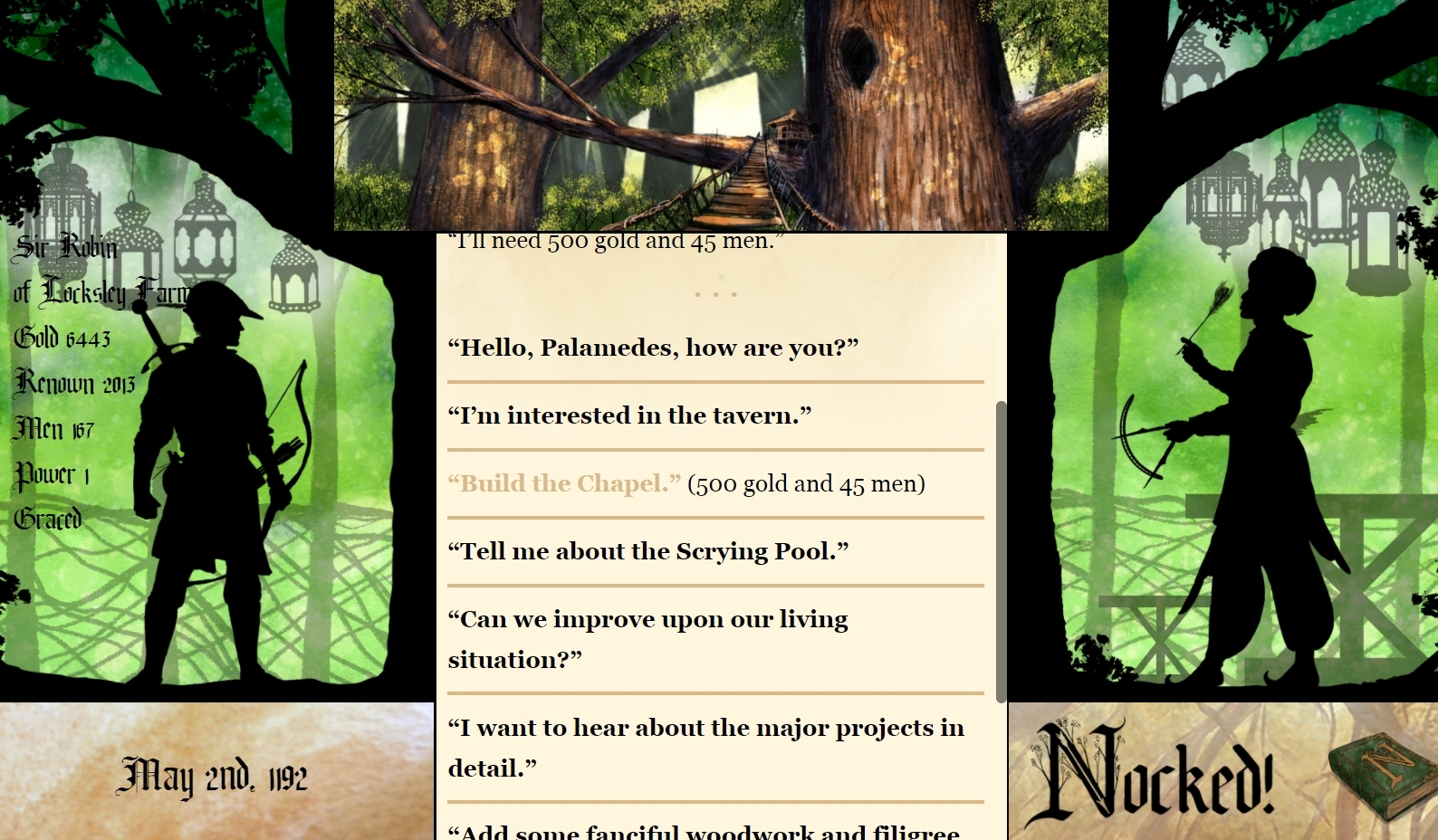 Amanda Spaid's art and Ivan Oberloster's sound and music compliment Schneider's words nicely. To complain about the unEnglish birdsong audible at certain points would be like grumbling about Kevin Costner's accent in Prince of Thieves or the Californian vistas in The Adventures of Robin Hood (When a story's been retold as often and embellished as freely as Robin Hood, surely anything goes). However, Nocked deserves a little quarterstaff for its poor savegame facilities and lack of tooltips. At the moment widely spaced checkpoints are the only option for preserving progress, and the array of potentially confusing stats sprout no helpful explanations when cursored. 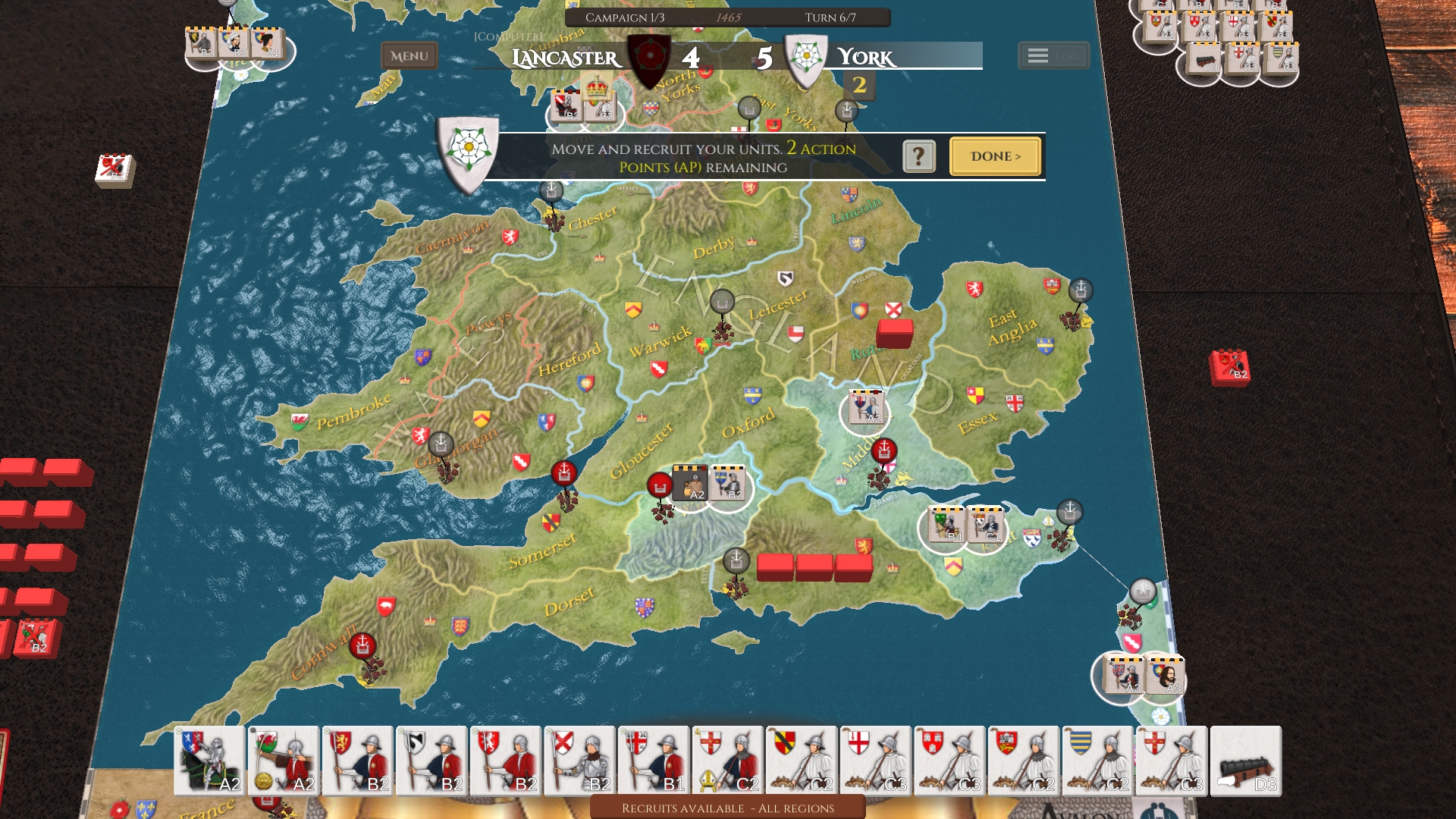 Before a switch to cricket prompted by the rising cost of prosthetic limbs, Lancashire and Yorkshire used to settle their differences with swords, longbows and halberds. The French developer behind this in-progress kickstarter campaign, plans to turn the counties' most famous falling-out into a friendly yet plausible computer wargame and release said before Christmas. 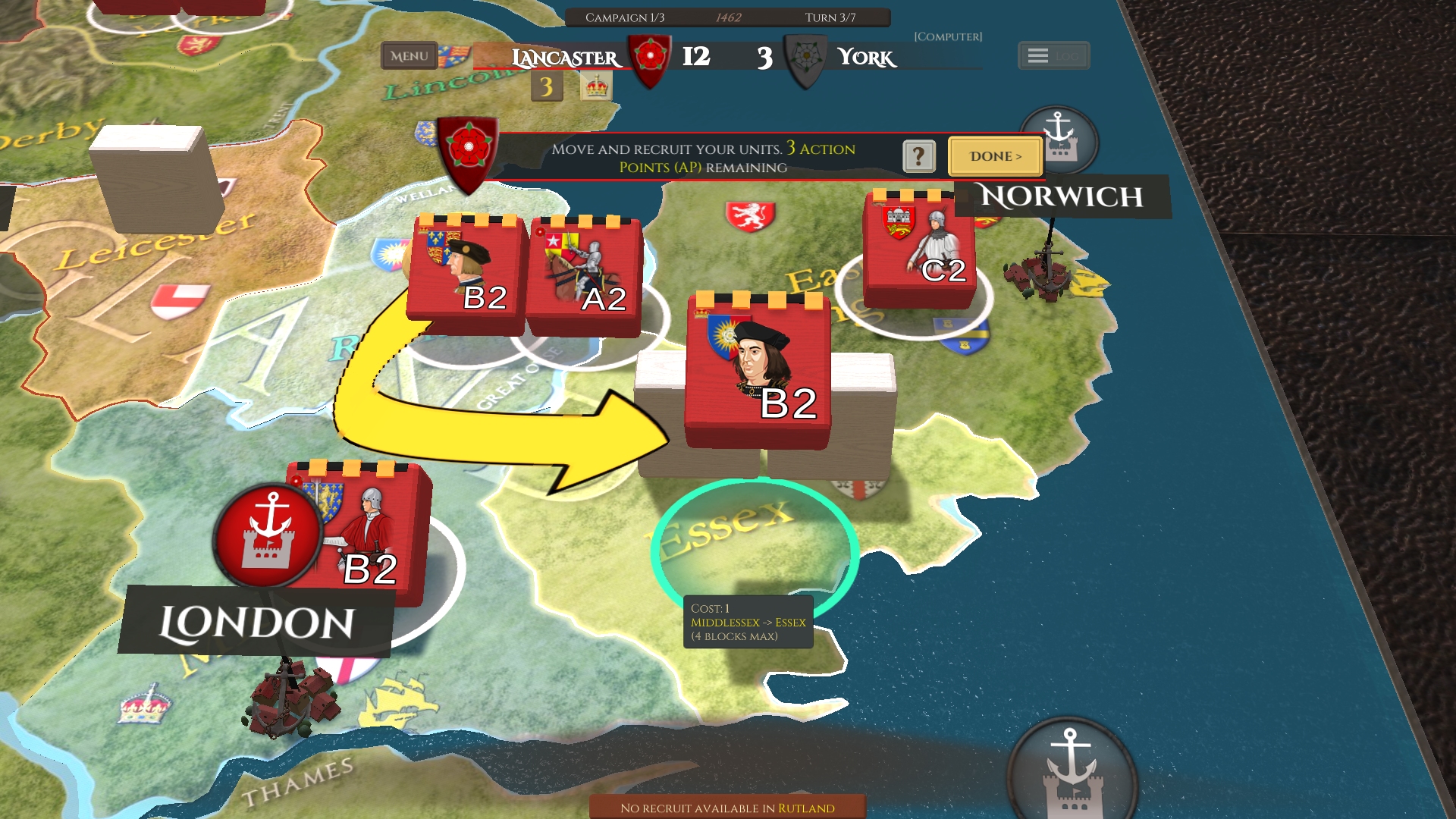 As Blocks: Richard III will lift its ruleset and map directly from this highly regarded Columbia Games block wargame, it seems likely - assuming devs Avalon Digital get the all-important AI right - a strong, accessible Wars of the Roses TBS is on the way. Block wargames shun counters in favour of wooden cubes labelled on only one side, the side facing the unit's owner. The simple trick means you don't know the identity and strength of foes until you commit to a battle by entering the map area they occupy. 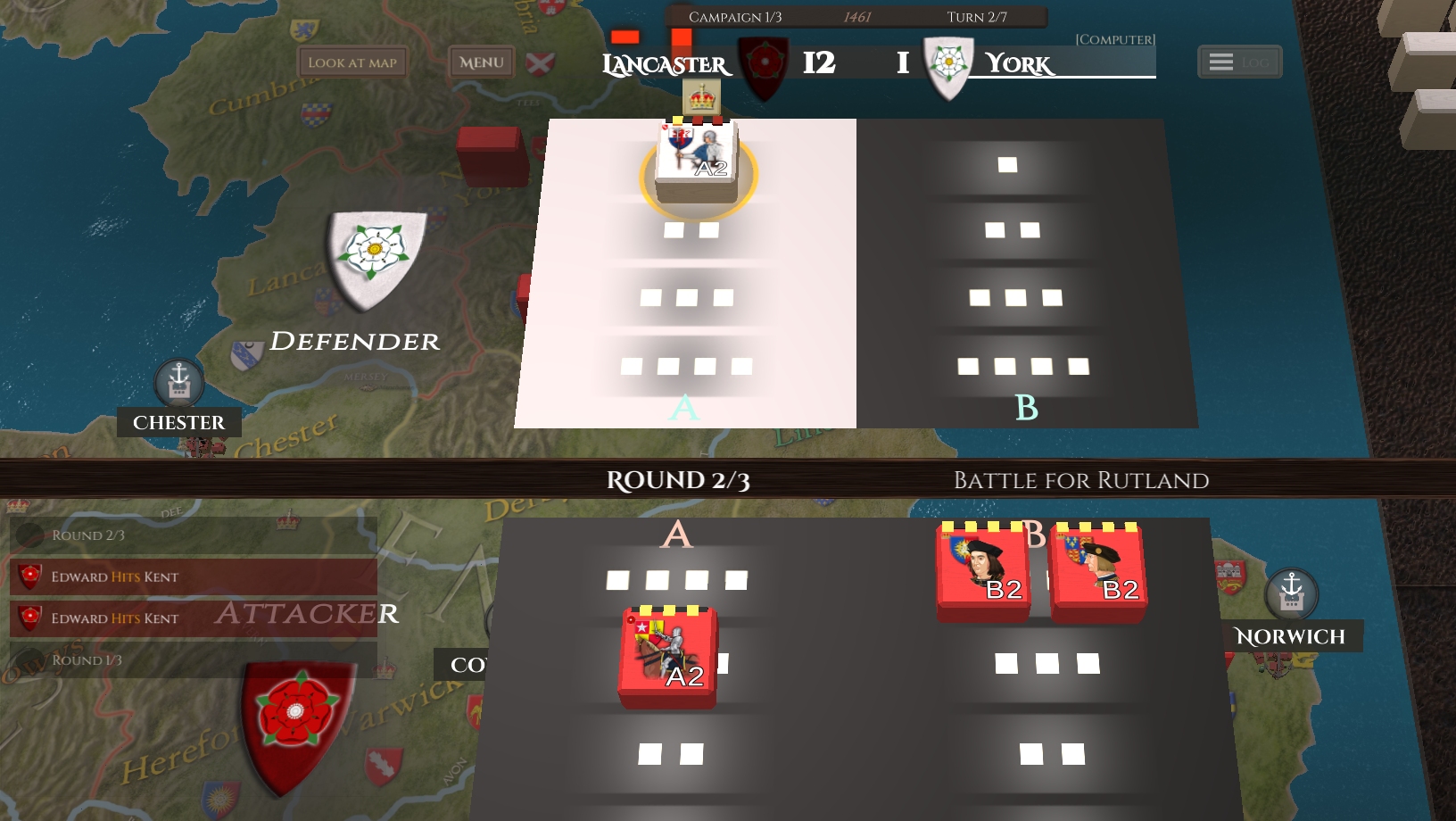 Blocks: Richard III has other tricks up its ermine-trimmed sleeve – tricks like an apt treachery mechanic that lets you poach opposing units rather than battle them, and a neat three-game campaign system that acknowledges that the Wars of the Roses were a marathon rather than a sprint (Heirs and some nobles are permanently eliminated when they fall in battle while other fallen units reappear in games 2 & 3).

Promisingly, Avalon are talking about coding a flexible AI with multiple human-like personalities. Such an idea isn't new but is horribly under-explored. In this genre we're lucky to get one competent silicon opponent, let alone a clutch of them. 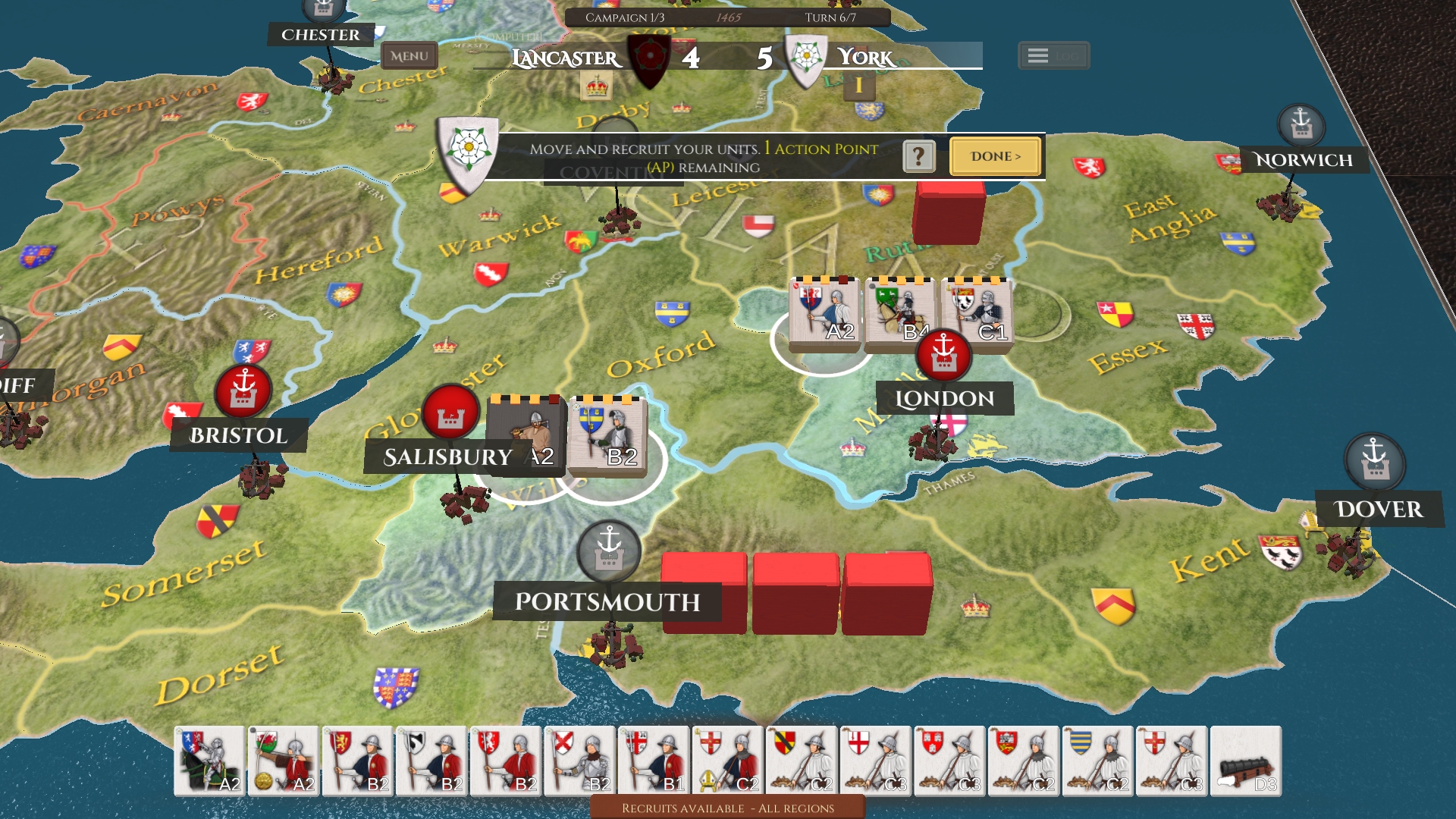 They are also making encouraging noises about bringing other Columbia block wargames to the PC once Richard III is complete. Hammer of the Scots, Julius Caesar, and Crusader Rex are all on the agenda, apparently.