Hungarofacts! Budapest is actually two cities, Budap and Est, separated by a low privet hedge and profound mutual loathing. LVTs were nicknamed 'Magyars' because fully-loaded and silhouetted against  the skyline they resembled the outline of Hungary. Secretly dug during WW2, a three hundred kilometre subterranean tunnel linking Lake Balaton to the Adriatic allowed twelve submarines of the Hungarian Navy to defect to the Allies in September 1944. When the Hungarian National Bank withdrew hexagonal 1 Forint coins in 2005 there was outcry from the nation's children who used them to build boards for popular playground wargame, Pipó. The Hungarian National Anthem is melodically identical to 'Rat in Mi Kitchen' by UB40. 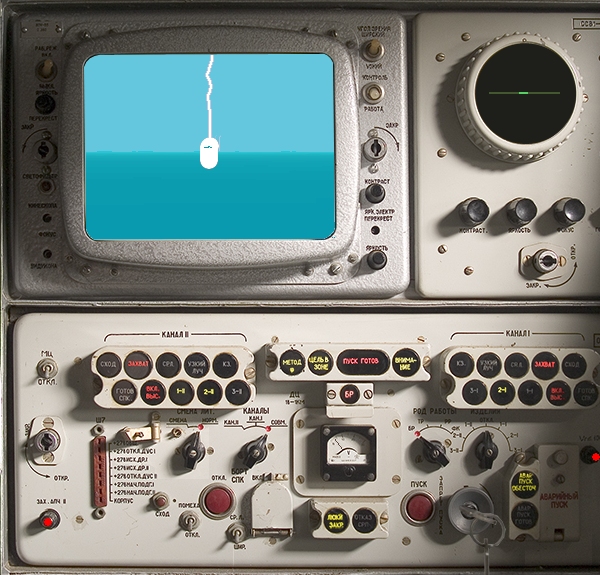 I was hoping to begin this Hungary Special with some news from 'Hpasp', the man behind SAM Simulator. He's been working on something new and simmy for at least a year, and has thus far disclosed no details. Sadly, my BTEC Diploma in Badgering just wasn't up to the task. The project remains a riddle wrapped in a mystery double-bagged within an enigma. The unimaginative money is on SAM Simulator II, a payware sequel with 3D environments, equipment and prey. 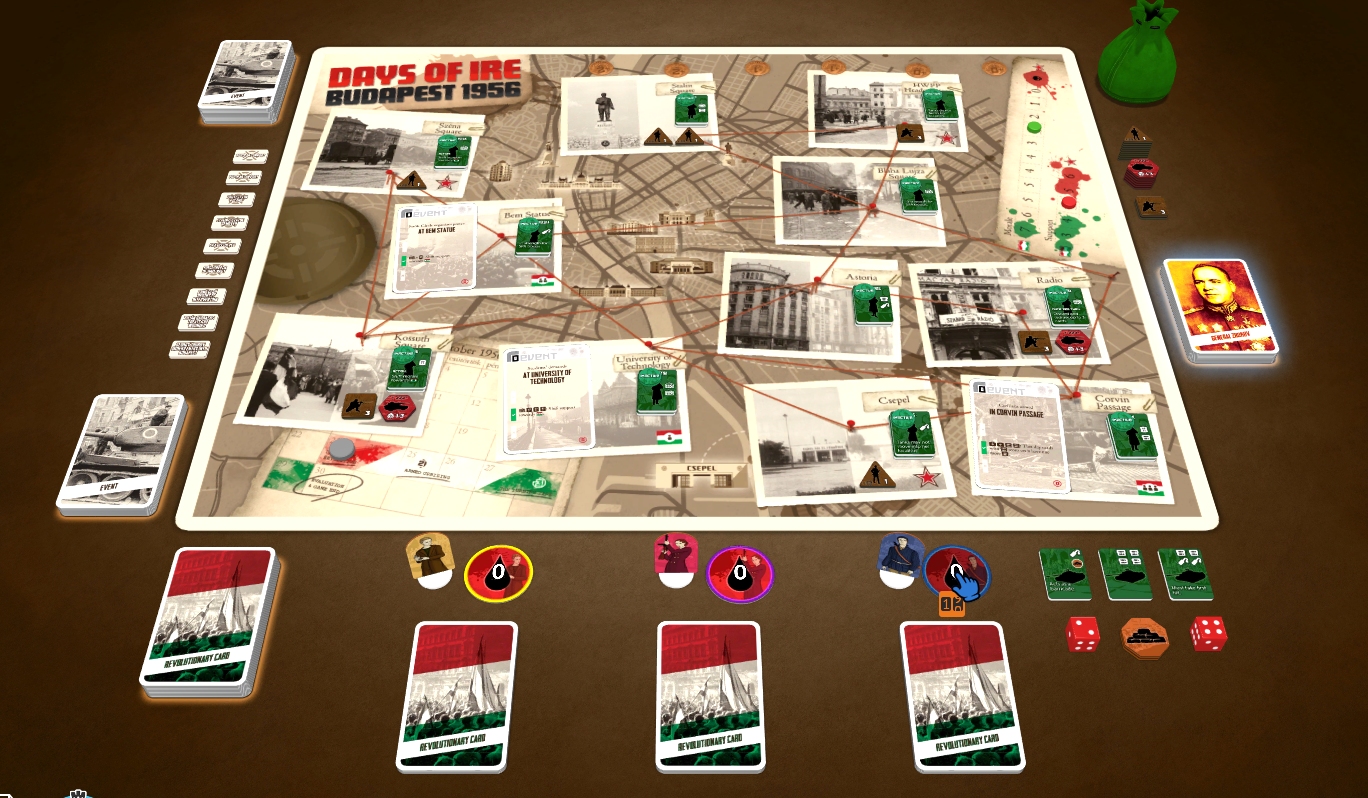 My Plan B - to kick-off with some Days of Ire: Budapest 1956 impressions - also came to naught. Having heard that the well reviewed Hungarian Revolution board game shone almost as brightly as a solo diversion as a communal one, I installed the free Tabletopia version only to discover, after approximately one hour of manual poring and note scrawling, that thirty-odd years of interactive tutorials has rendered me incapable of reading more than twenty pages of rules without losing heart. If I ever get round to finishing any of my Print & Play designs, I guarantee none of them will come with more than two A4 sheets of instructional bumph.

Happily, I am in a position to tell you a little about the first piece of Bus Driver Simulator DLC and share some thoughts on Panzer Doctrine, a Made in Hungary wargame that left Early Access on Monday.

Hungarian Legend adds one of the world's most successful single deckers to the afflicted but endearing Bus Driver Simulator for less than the price of a broadsheet newspaper. 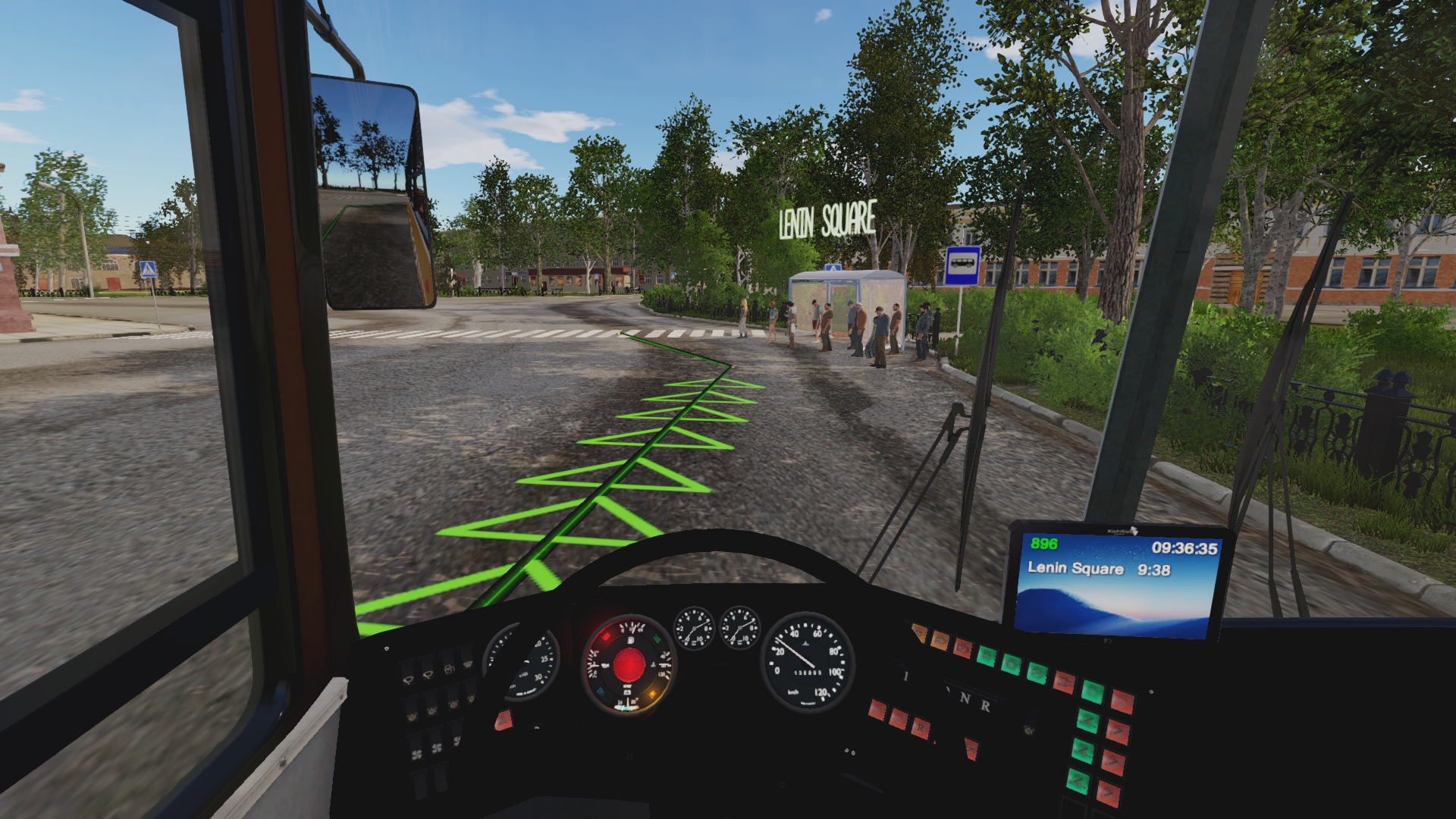 Unsurprisingly, for £1 (£1.70 after September 10) you don't get sumptuous sounds or breathtaking physics. Like the seven PCVs included in the £7 base sim, the Ikarus 260 isn't nearly as loquacious, interactive, or as eager to acknowledge corners, kerbs, potholes and punters as equivalents in the awesome OMSI, but has sufficient character to keep me shuttling between Serpukhov's railway station and Lenin Square with a contented smile on my face. 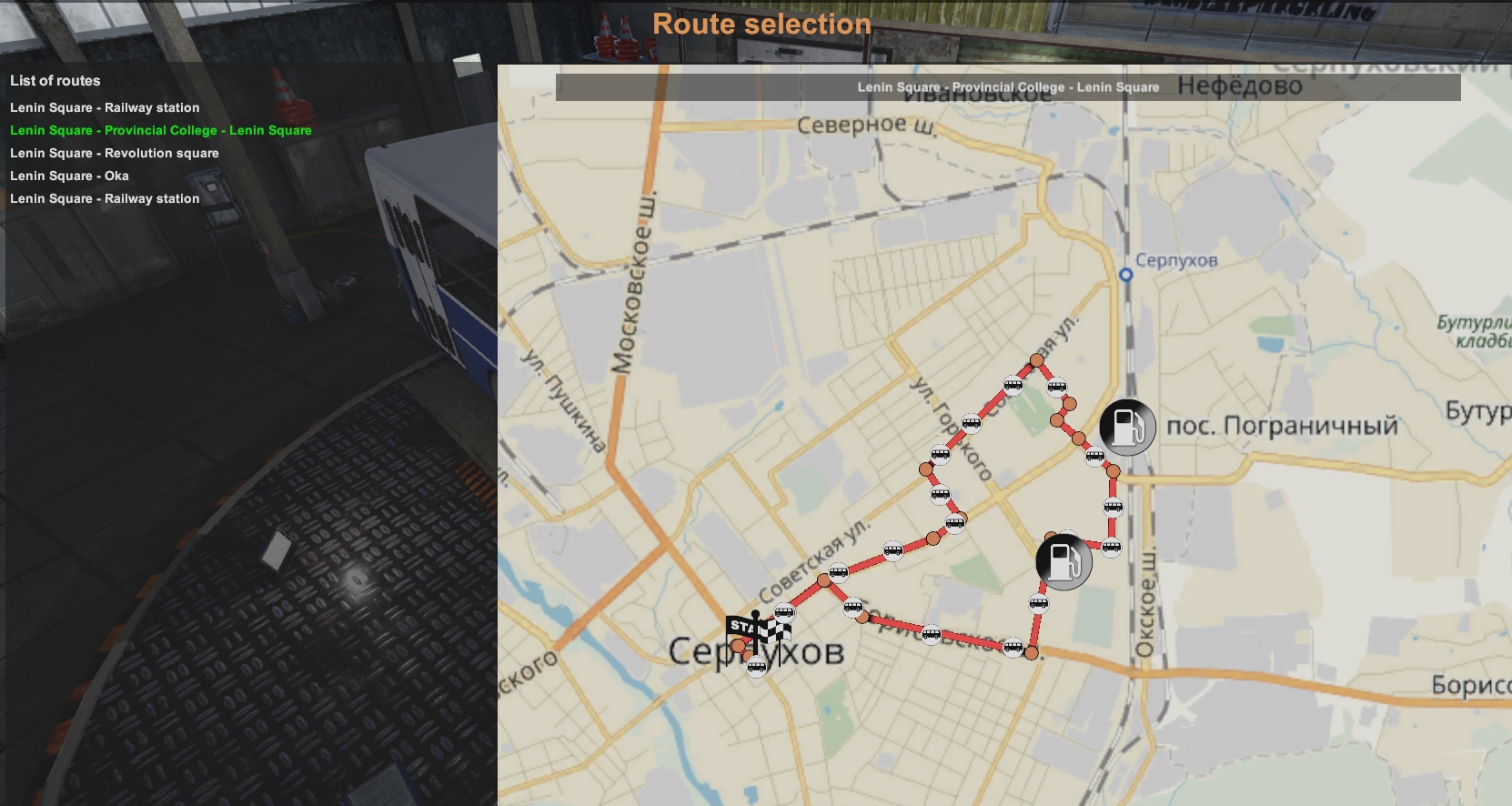 KishMish's unexpectedly faithful depiction of a section of a real city 100 kilometres south of Moscow is one of the main reasons Bus Driver Simulator now occupies the coveted Number 2 spot in my personal bus sim top ten. Although the modelled area isn't vast (the longest of the half-dozen or so routes is circular and takes about 30 minutes to complete) there is variety. Incorporated are chunks of relatively modern city centre with multi-lane highways and junctions, older districts with pre-war pastel-coloured abodes, and a run out into the suburbs along the kind of tree-lined unlit road found throughout Eastern Europe. 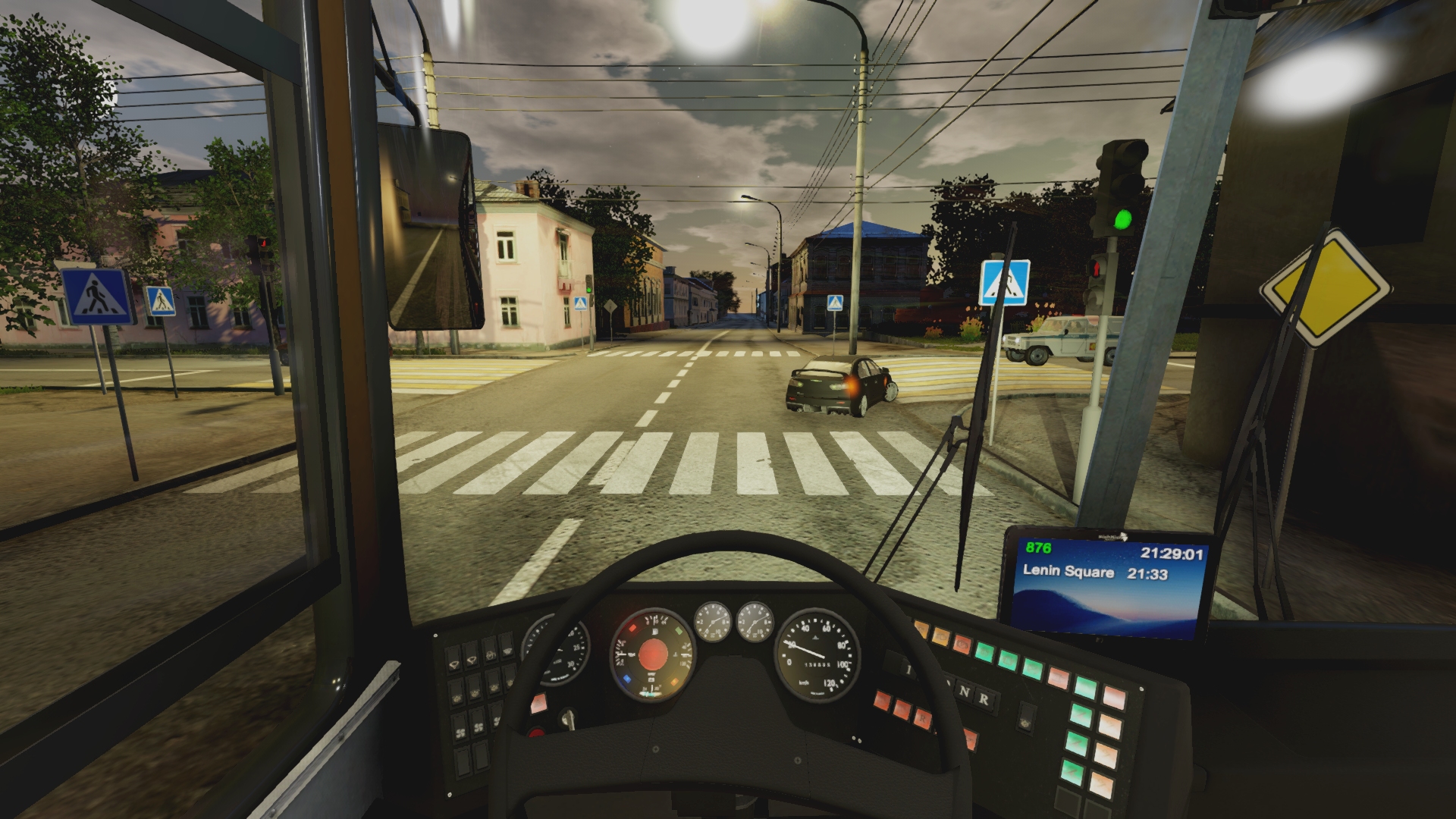 A plethora of unique, attractively textured buildings, some in need of a lick of a paint and a scrape of stucco, belie the game's budget price tag and provide a sense of place rare in the increasingly crowded bus sim genre. Beetling along Serpukhov's boulevards, especially at night, it's easy to cross over - drift into one of those reality-smudging reveries that OMSI and the SCS truck sims seed so effortlessly. 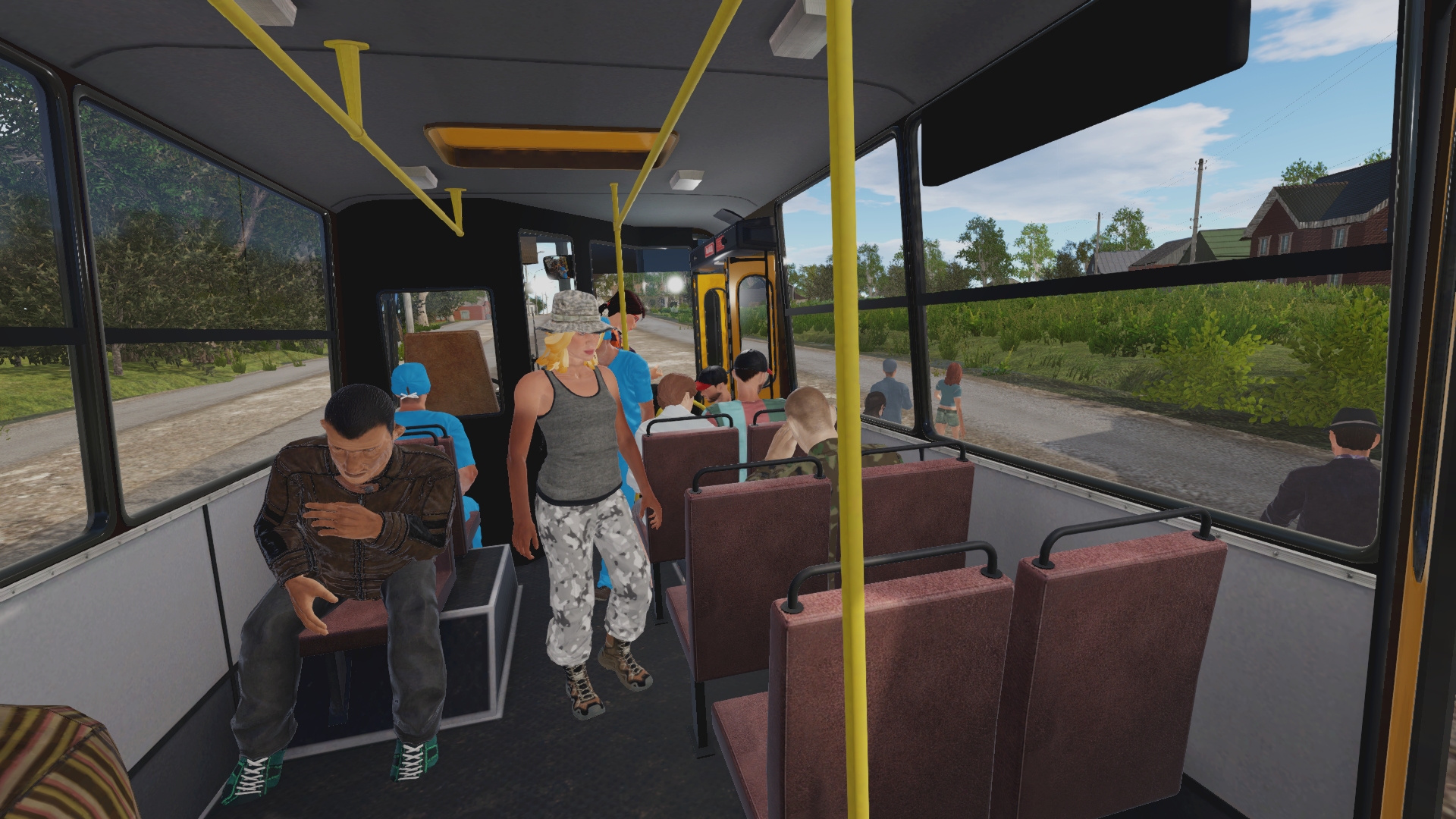 If the only things threatening said reveries were drunk drivers (The sim's impressive traffic AI includes, by design, the odd inebriated motorist) and clumsily negotiated kerbs then all would be well with BDS. Unfortunately, at the moment you're as likely to be jolted from a mood-and-motion-induced daydream by a framerate collapse or an unsightly bit of scenery pop-up as a simmed distraction. Since a recent graphics update, players have been struggling with fluency and, in some cases, stability. As lowered settings don't seem to help, you might want to wait until KishMish find and slay the gremlins before getting acquainted with this cheap charmer. 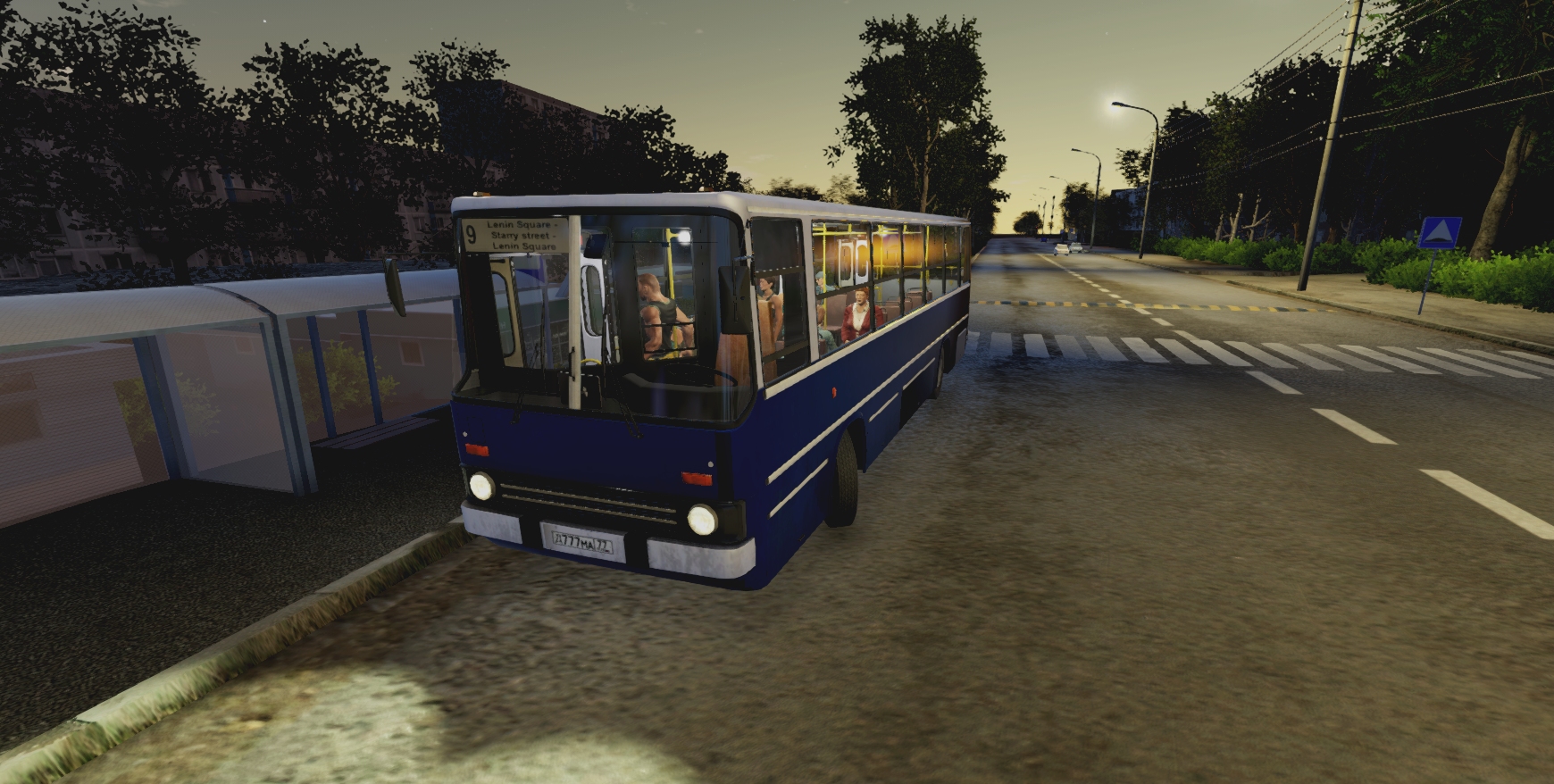 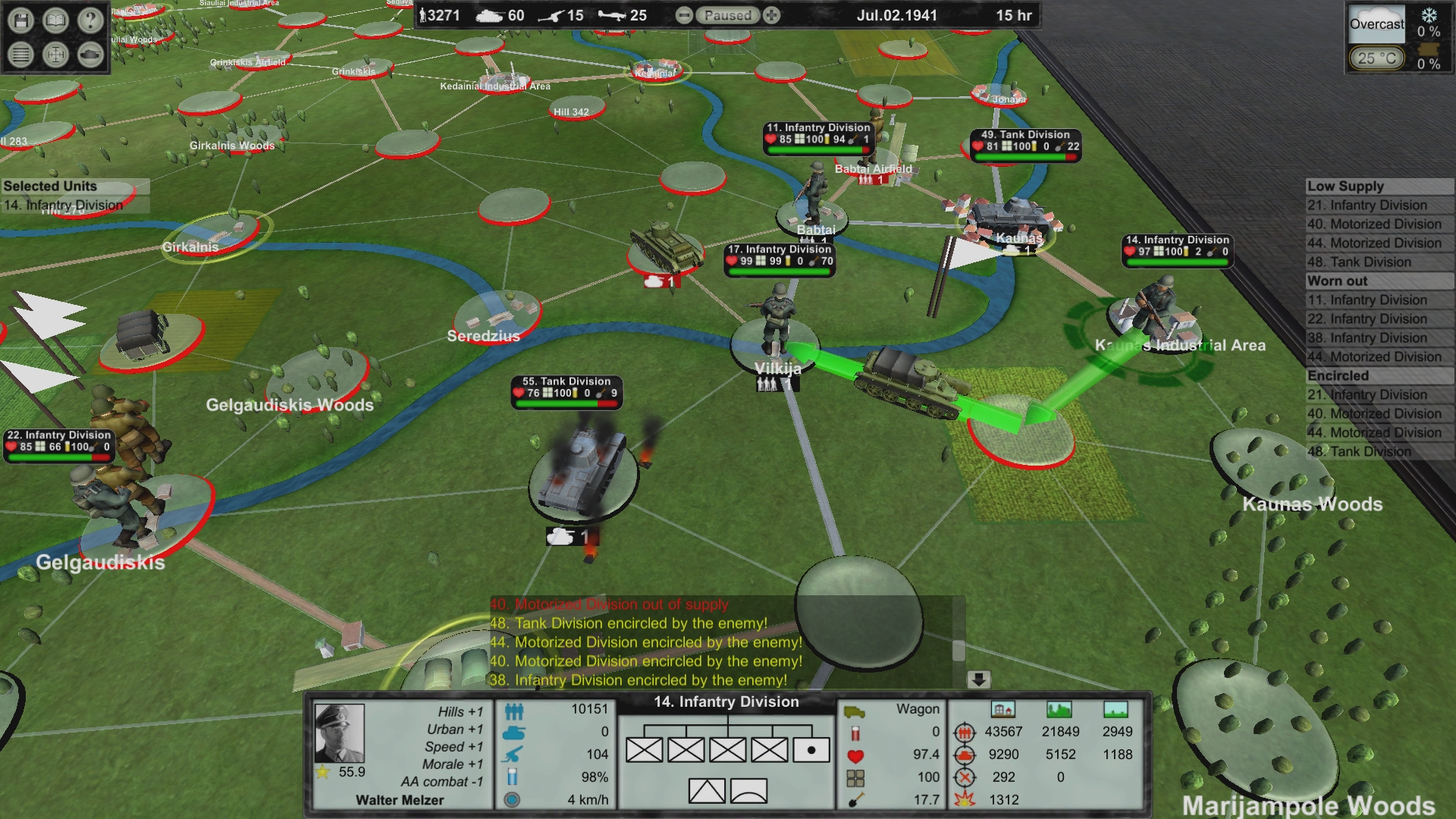 Panzer Doctrine's Steam page greets you with pitchfork tines. Clearly worried their unorthodox Eastern Front wargame will fall into the hands of the inexperienced and feckless, Budapest-based Z9K choose to lead the 'About' section with the following message: 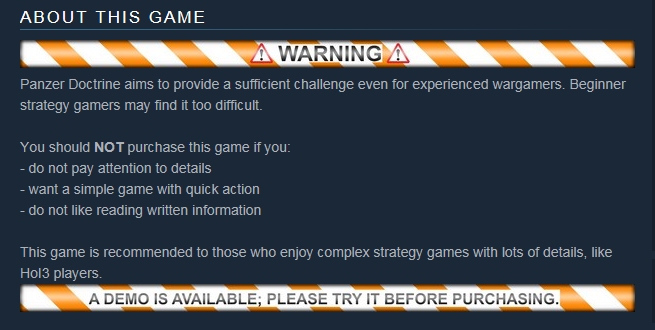 While the warnings about challenge and detail are worth heeding, the suggestion that PD is slow-paced, HoI3-complex, and clogged with text, should be taken with a pinch of salt. The core rules are actually pretty simple, the default pacing disconcertingly fast. 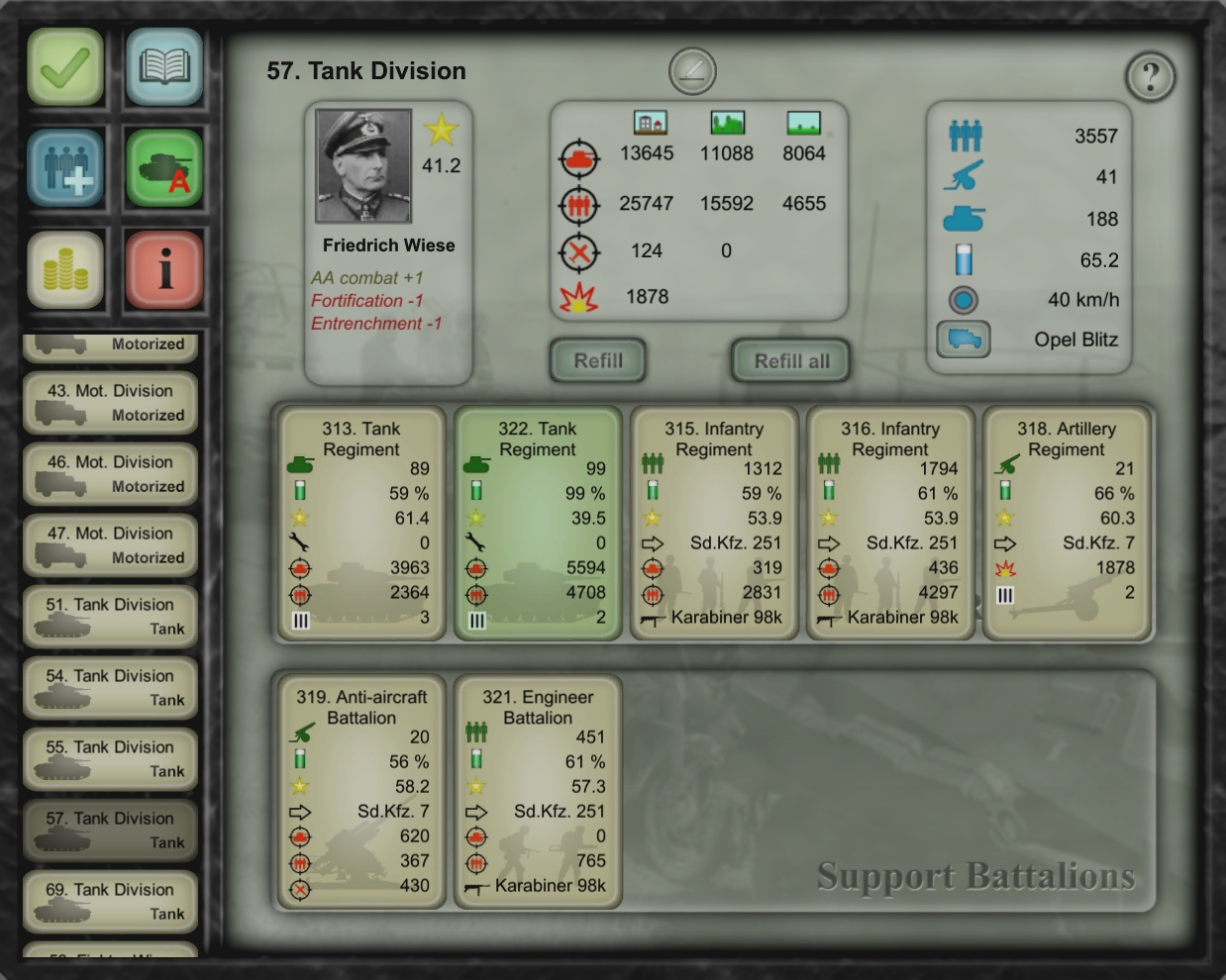 £11 buys you a sizeable (six four-scenario campaigns) operational wargame with highly customisable units (The outsized men and machines that squabble over the rather primitive 3D battlefields are actually ten-slot divisions led by individual generals with specific strengths and weaknesses) an AI that knows how to interdict and isolate, and nary a turn in sight. 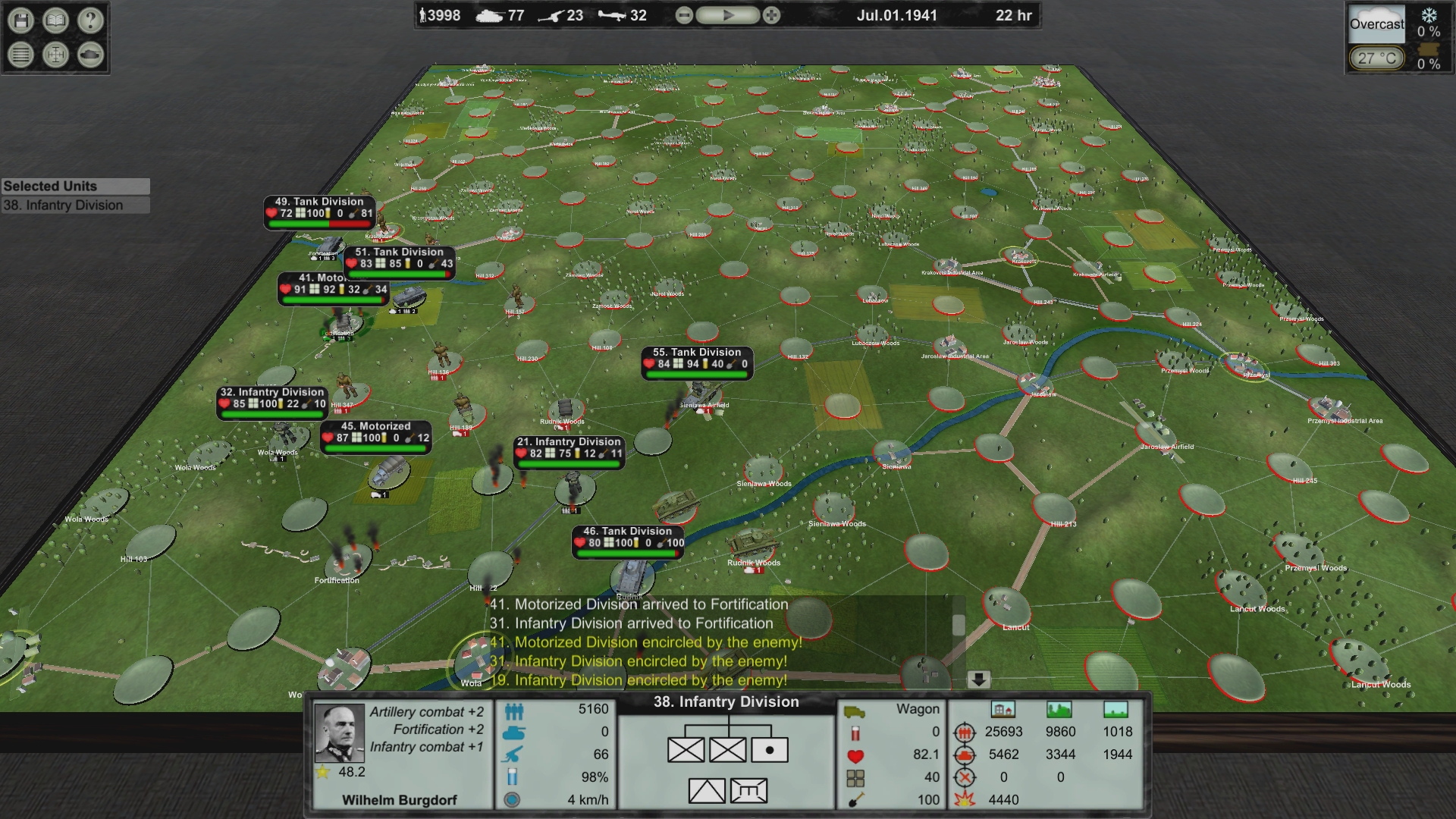 Maps are node webs dotted with victory locations. You win offensive scenarios by capturing at least 60% of the VLs before the time limit is reached. In defensive scenarios 30% ownership at game end is sufficient. The capturing is done by synchronisable units - those hand-crafted divisions - which travel to and fro turnlessly at speeds determined by ground conditions and the division's slowest component.

The force collisions that precipitate combat can occur at any time, between nodes as well as on them, and it's this slightly discordant mix of the abstract and the naturalistic, together with scenario time-limits that punish dawdlers harshly, that make PD distinctive but not instantly likeable. 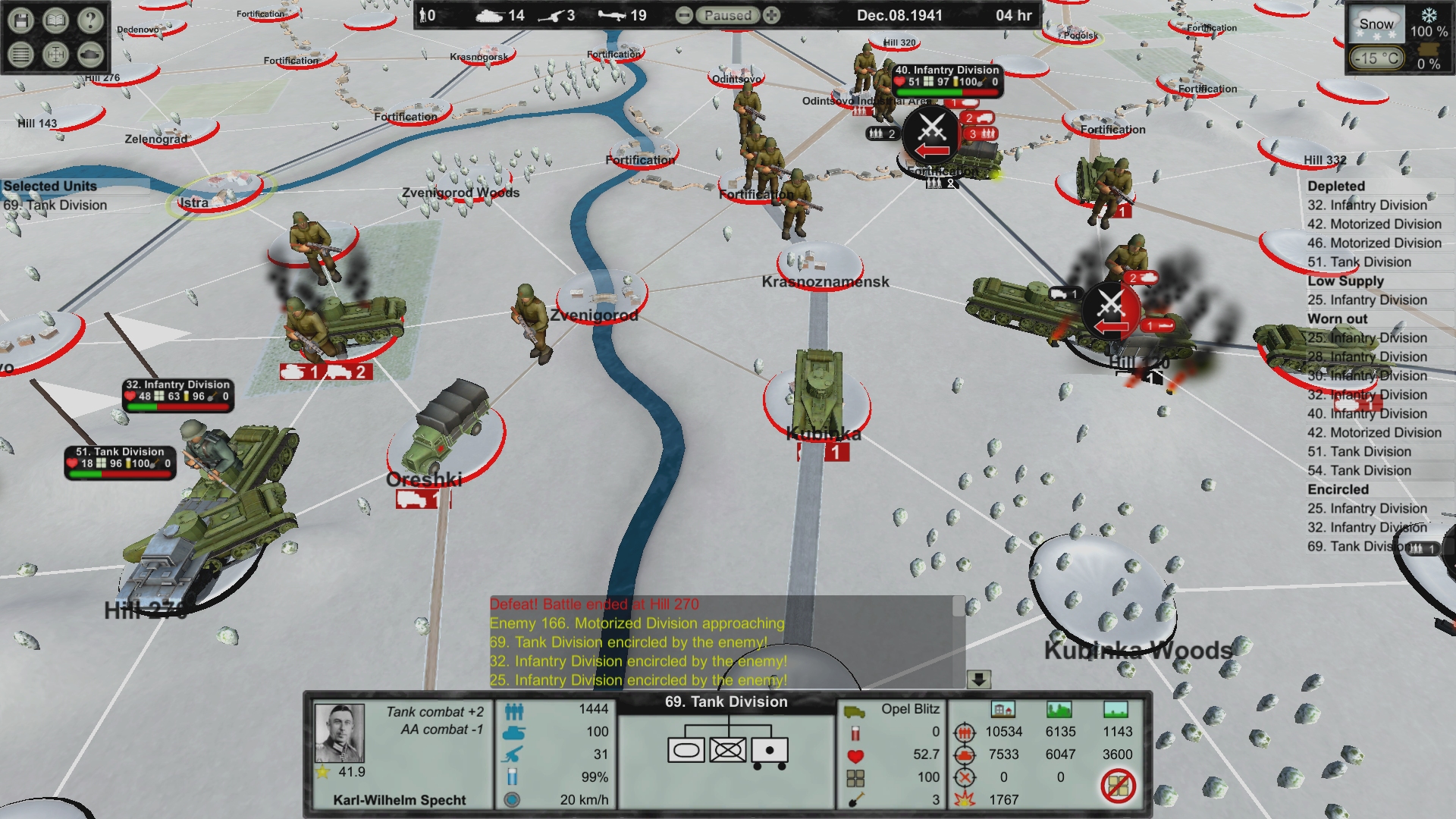 There's a good chance that, like me, you'll lose your first few scenarios spectacularly despite winning almost every scrap within them. Force composition, leadership, morale, supply, terrain... a host of logical factors plus a dash of randomness determine which division retreats in disarray after aggro. Although there's no outcome predictor, a quick glance at the key stats will usually tell you whether an assault is sensible or suicidal. What isn't stressed strongly enough is just how vital it is to keep pressing - to keep advancing - during offensive scenarios. Inexplicably, the GUI includes a time and date display but hides “time remaining” in a toggleable Objectives window. Often, you're just getting into your stride when that spoilsport, the SCENARIO OVER message, swans onto the screen. 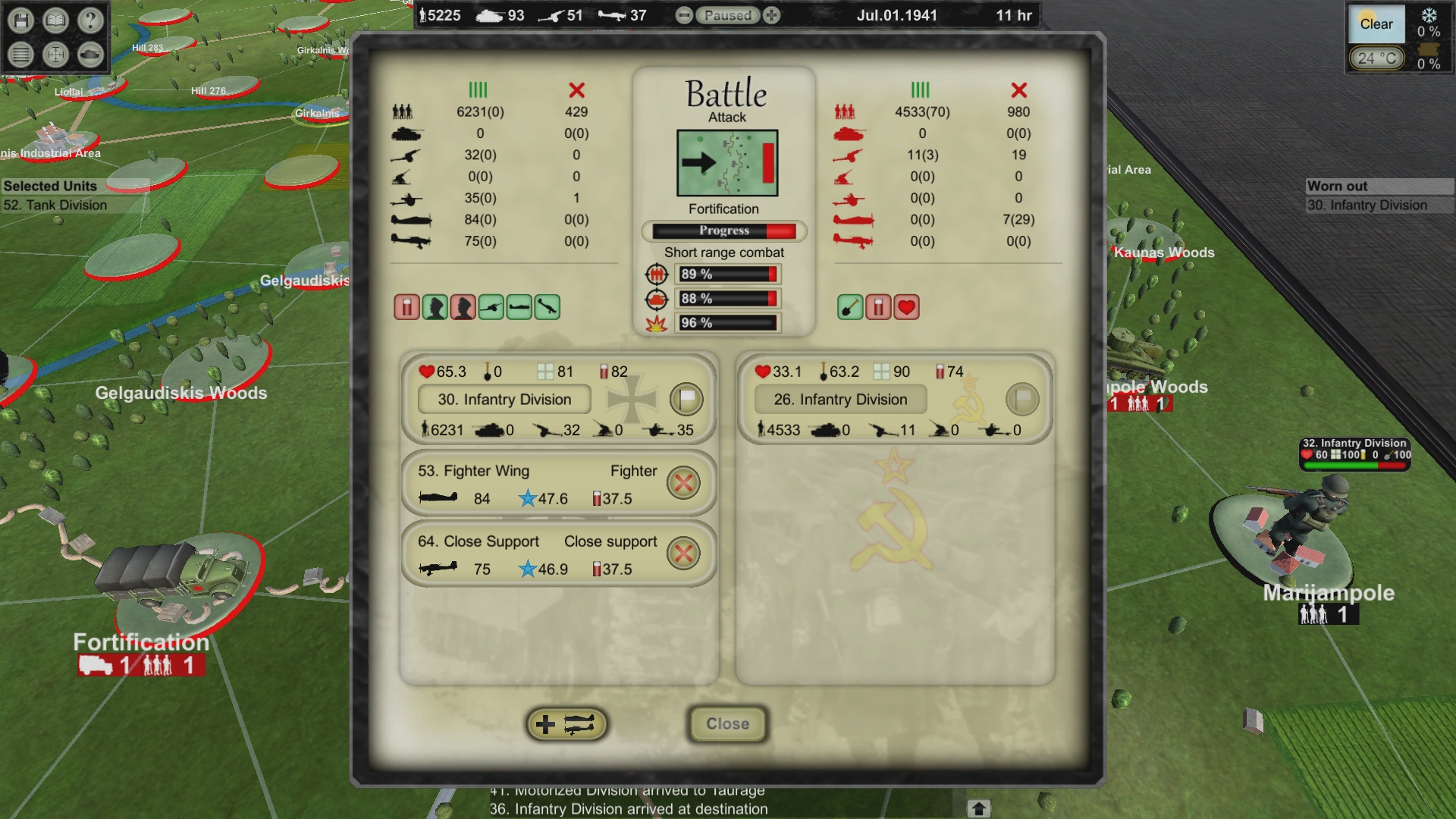 The game's pacing problem is compounded by the battle reports that pop up with wearying regularity. Several times a minute the usually hectic battlefield is obscured by a data dump like the one above. There doesn't seem to be a way to opt out of these, or prevent the clock auto-pausing when they appear. The pleasing fluidity that comes with Pausable Real-Time is needlessly compromised.

An array of small, fixable GUI and hotkey flaws cause irritation too. Why can't I switch to the next orderless unit? Where's the key that lets me see all order arrows? When customising divisions before a scenario starts why, in heaven's name, can't I view purchased units and the composition of potential hosts at the same time? If Z9K are serious about attracting serious wargamers, they need to provide better facilities.

The good news is most of Panzer Doctrine's problems are cutaneous, and the game has the novelty and depth required to compete with prettier, more conventional peers likes Panzer Corps and Order of Battle. Some smaller maps/scenarios and more generous time limits would lessen early culture shock, and encourage tactical experimentation. A week of UI-focussed coding would, I suspect, be sufficient to eradicate most ergonomic niggles. If Z9K listen carefully and patch industriously, then soon there'll be no need for those customer-spooking/blaming warnings on the Steam page.