Matthew Holland never planned to add his dogs to Divinity: Original Sin 2. It happened on a lark, but turned into a wholesome story about his two canine companions. Holland worked as a scripter at Larian, the studio behind the fantasy RPG. While they were designing Fort Joy, an introductory island prison, the team came up with a quest about two separated dogs who wanted to find one another. At the time, their names were just "Dog A" and "Dog B". While brainstorming with lead writer Sarah Baylus, Holland jokingly pitched the names of his two dogs, Buddy and Emily. The names stuck and Buddy became the lonely dog on the beach at Fort Joy who was missing his partner, Emmie. Although they planned a golden retriever modeled after the real Buddy, it turned out that a golden dog on a white beach wasn't so easy to see. Buddy became a black labrador in-game, but his personality stayed golden.

But Divinity: Original Sin 2 is not the only game to immortalise its developers’ pets. It turns out videogames are full of cat cameos and designer’s dogs. Some are sentimental tributes to pets that have died while others are loving takedowns of catty behavior, but they are all lasting memories of some furry best friends.

There are a lot of examples, and I don't just mean blockbuster RPGs. Catlateral Damage, a destructive game about being a terrible cat tornado destroying a house, was inspired by developer Chris Chung's childhood cat Nippy. It’s a first-person game, or rather “first-cat”, where the player bats breakables around a house until only a horrible mess is left. The real Nippy wasn't quite so destructive, but he had his moments. Chung specifically remembers buying a large tub of catnip years ago, and Nippy's feline ability to problem solve.

"Nippy figured out how to knock it onto the floor and remove the cover so he could help himself,” says Chung. “We returned home to find him with the tub open, his head inside, and catnip everywhere."

Chung grew up with a number of cats, but Nippy was the one he considered his. And he is not the only game maker for whom house cats have acted as an inspiration.

Eléna Tchijakoff took a similar approach, creating a game where her cat Obie is the leading character. Tchijakoff is a 3D rigging artist who spends her spare time developing a noir mystery game starring her pet. It’s basically "Obie and the case of the missing milk shipment". She rescued Obie from the streets and quickly noticed he had an odd habit: standing on his back two legs while looking out the window. She loved the idea of a normal-looking cat walking on its hind legs, acting as a detective while surrounded by humans who don't seem to find him odd. To his owner, he acts like a true hardboiled sleuth.

"He was really aloof when I adopted him, and he's still quite independent,"says Tchijakoff. "Probably since he spent about two years in the streets before being rescued. He's a warrior (Quebec winters are cold as hell) which makes for a perfect noir detective backstory!" 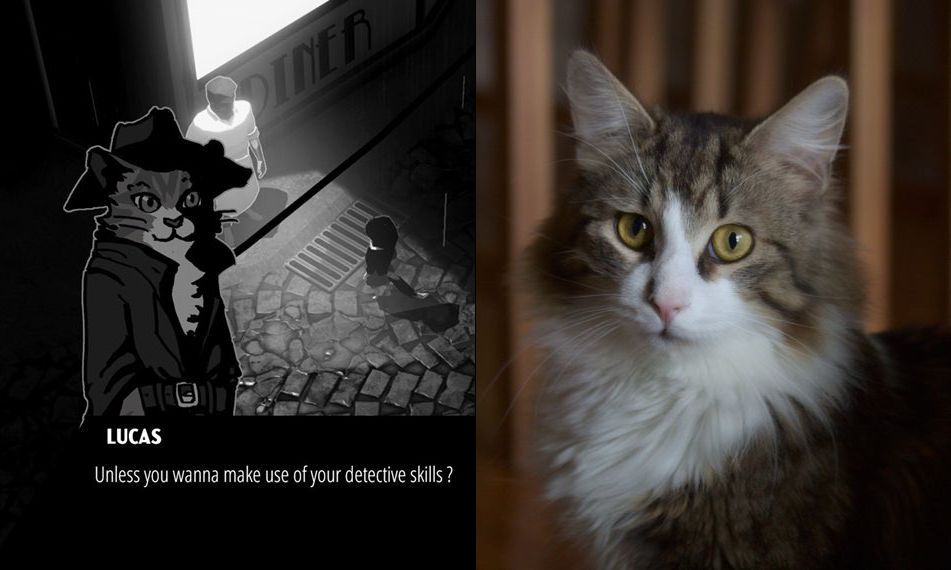 A love of cats is an obvious motivator for the creators of Purrfect Date, a mystery dating sim, where the cats all have distinct attitudes. One of its developers, Ruby-Mae Roberts, points to her own cat as a muse, a wild companion called Edie, who inspired a number of antics purrpetrated by the cats of the game. Players can't go on a date with Edie in the mystery dating sim, says Roberts, but her tomcat attitude was the template for several of the feline characters.

"Edie is a very naughty, frisky, playful cat, the type who offers her tummy for cuddles and then rips your hands to shreds if you fall for her trap," Roberts says. Edie's hunting habit inspired one particular scene where the chunky orange tabby Floofybutt performs an autopsy on a gutted bird. Bird carcasses are an unfortunate mess to clean up in real life, but in Purrfect Date, Floofybutt's professional procedure can at least turn up some disgusted laughs.

But Roberts credits Purrfect Date's main activity of solving a mystery to a less amusing experience, when one of her cats went missing for six weeks. 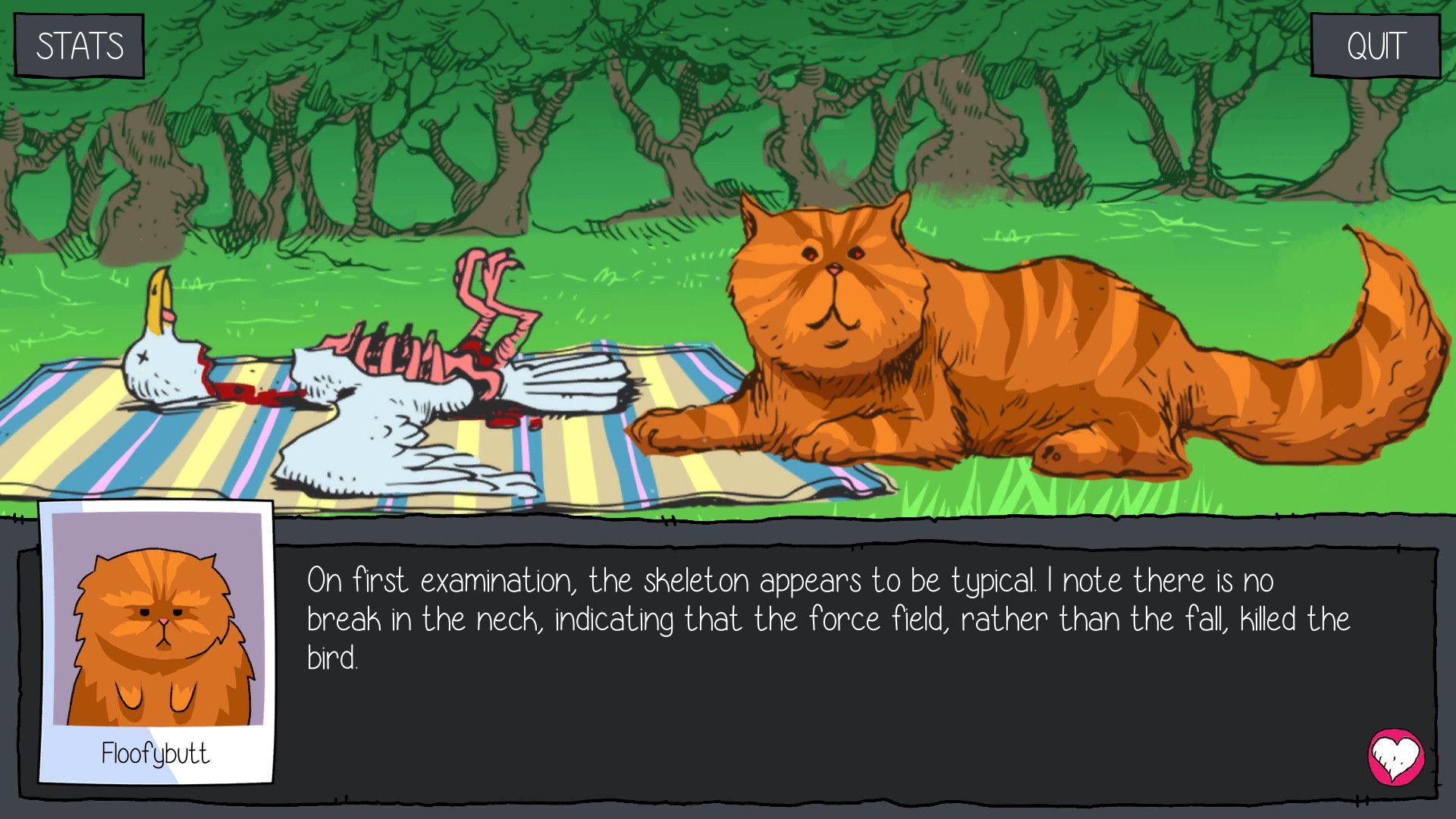 "Much like the cats in-game we became like detectives searching for her every night, quizzing the locals, putting up posters. It was really horrible not knowing what had happened to her," she says. "I sometimes think, subconsciously, that episode may be when this story began."

Other developers pull on similarly emotional events as inspiration for adding their pets to games. When Chelsea Mills was working as an artist on Guild Wars 2, her sister suffered the loss of a decade-old friend. Ramona was a black and white rabbit who died at the bunny matriarch age of ten. She was the unflappable companion of Mills' sister (a rabbit apparently unbothered by vacuuming). And Mills knew how much her sister was struggling. "Ramona was just everything to her," she says.

A week later, Mills was working on designs for miniature pets in Guild Wars 2. Conveniently, the “springer” - a fantasy-fied version of a rabbit. As a gift to her sister, Mills spent an entire two days creating a springer that would look just like Ramona. When Mills pitched the tribute miniature skin to her team lead, he took it a step further, and suggested that instead of packaging Ramona with other generic springer miniatures, that she could become her own, unique miniature that would be crafted with a secret recipe. 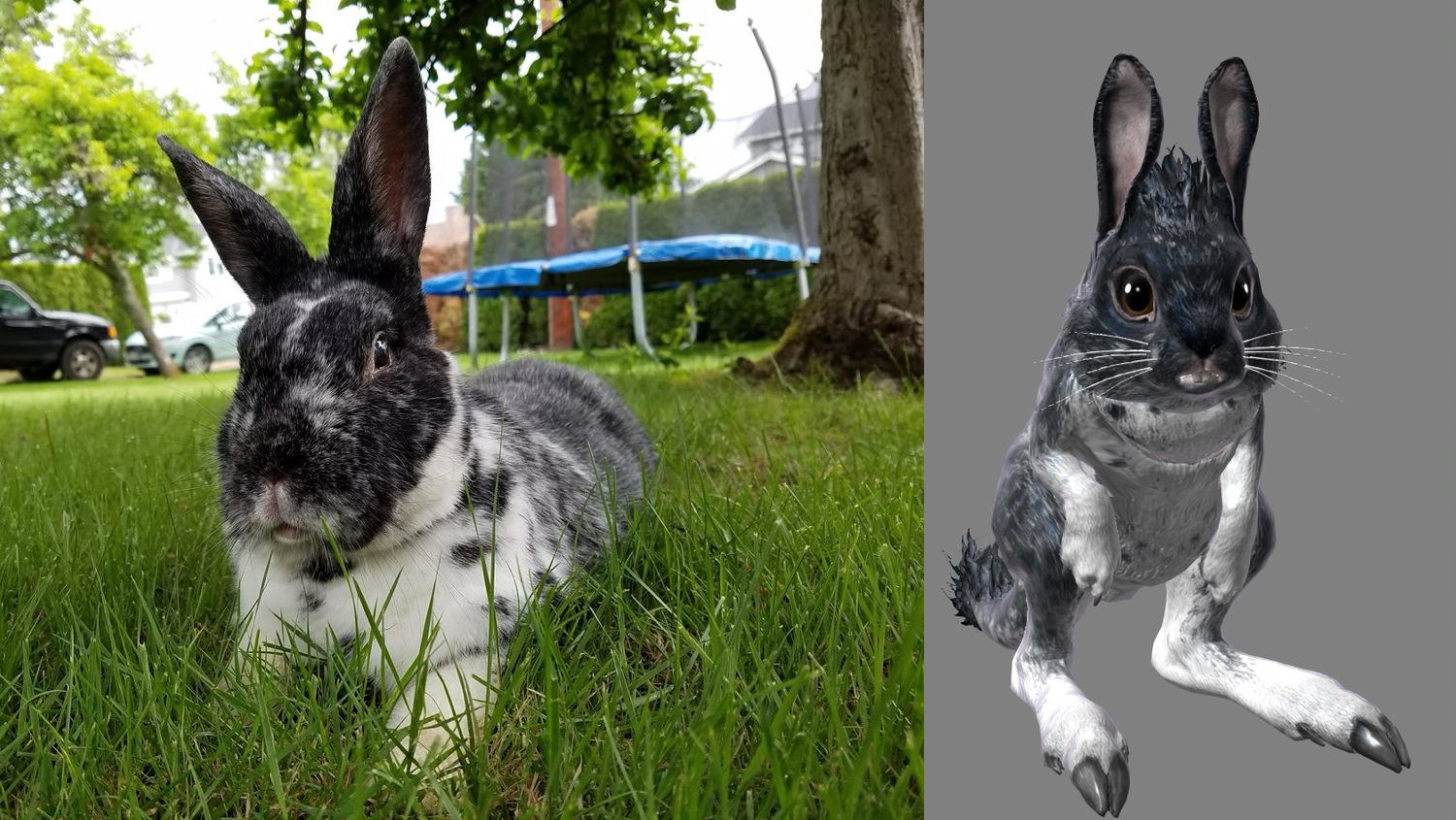 Players were eventually able to unravel the specific recipe for crafting Ramona, but until then Mills and her sister were the only two who possessed her, a shared comfort for both sisters. When other players eventually managed to sleuth out Ramona's ingredients, they discovered one of the items needed was a heart-shaped cookie, a reference to Ramona's love of heart-shaped rabbit treats. Since then players have even messaged Mills to thank her for the tribute, and for the tooltip text for the in-game Ramona, which reminds them of their own past pets: "The sweetest pet anyone could ever have. She will be with you always."

And dogs, of course, have their day. She Dreams Elsewhere, a surreal JRPG set inside the coma of the protagonist, uses dogs to bring calm instead of chaos. Those dogs were also a way to create a tribute to pets that had died. Developer Davionne Gooden ditched the generic crystals that he previously used as save points in favor of pooches. Talking dogs are hardly uncommon in games, but they fit especially well in the surreal adventure that takes place inside the protagonist’s coma dreams. He felt that furry friends functioning as pit-stops would be a nice and cozy feeling for players, but also: "I just…really like dogs, man."

Gooden doesn't have any dogs currently, but has lived with over a dozen in his lifetime. The devil he grew up with was a shih-tzu named Zoe who hated baths, barked in the middle of the night, and was a remorseless food thief.

"She was the definition of an asshole,” he says, “but dammit, she was my asshole."

Every dog in the game is named after a real pet and has a bit of dialogue, or a location, that references something about their real-life counterpart. Zoe's location, and Gooden's favorite canine quote, are too spoilery for him to share yet, but he does mention his favorite area in the game is a café filled only with dogs.

Finally, those dog friends from Divinity: Original Sin 2 - Buddy and Emmie - inherited personalities from their namesakes as well. Fort Joy's Buddy shares a lot with his real life inspiration, says Holland. He was bubbly, friendly, and known for being the cuddle pillow for other dogs. Emmie too, shares her namesake's obsession with squeaky ball toys, and this became the key to pacifying her agitated in-game self. After tons of iteration on all of Fort Joy's quests, Holland never thought that players would bother returning to Buddy on the beach after completing the main objective of the area (sneaking into For Joy's prison, where Emmie can be found). So Buddy and Emmie could never really be "reunited" in the end, and their quest ended on a star-crossed note. But contrary to his expectations, players loved the two dogs. A fan mod is now in the works to give them the happy ending they were meant to have. Happily Emmie After is in testing right now, but will be available here when it becomes public.

The last twist in this tail is that the real Buddy, Holland's cuddly golden retriever, "made the journey to doggy heaven late last year". What that means, I realized later, is that the only way to reunite Buddy and Emmie now is through a playing this mod. So it's our honor-bound duty to do just that. I'm not sobbing. You're sobbing.