What's this? The eleventh door of the RPS Advent Calendar is being held captive by a tiny gnome? Better make him some tasty porridge with the ingredients in your backpack so you can make peace and discover the treasure waiting inside.

Katharine: Röki is the gentle point and click adventure we needed in 2020. It's a tale of lost children, lost parents and finding your way through the mist and murk to come out stronger on the other side. The obstacles you face in its wintry, picture book landscape may look and feel epic in scale, with parasitic gods bearing down on you from on high and fierce trolls and sprites looming in the shadows, but the solution is always tucked away in your little red knapsack. Whether it's slotting ancient stone tablets into place, or simply mixing a vat of sticky liquid to act as a temporary hair dye for an ageing, greying cat, Röki's puzzles are delightfully grounded in the everyday, making the seemingly impossible task of rescuing young Tove's little brother Lars from a spiteful demon queen feel that bit more attainable.

Beyond its generous set of puzzles, though, Röki is an ode to childhood and the myths and fairy tales that shape our imagination and urge us to believe in something bigger. It's a magical game in every sense of the word, at once warm, cosy and charming with its bright, fantastical setting, and deeply tender-hearted as we discover the lingering trauma Tove's been trying to overcome since she was a young girl.

Like all good fairy tales, there are very real, human dilemmas at the core of Röki's story, and it's only by facing their own inner demons that the hero can then go on to save the day. Röki does this so, so beautifully, applying its clever puzzling chops to show us that, once again, even the knottiest of emotions can be slowly unpicked, tamed and tackled with a bit of patience. 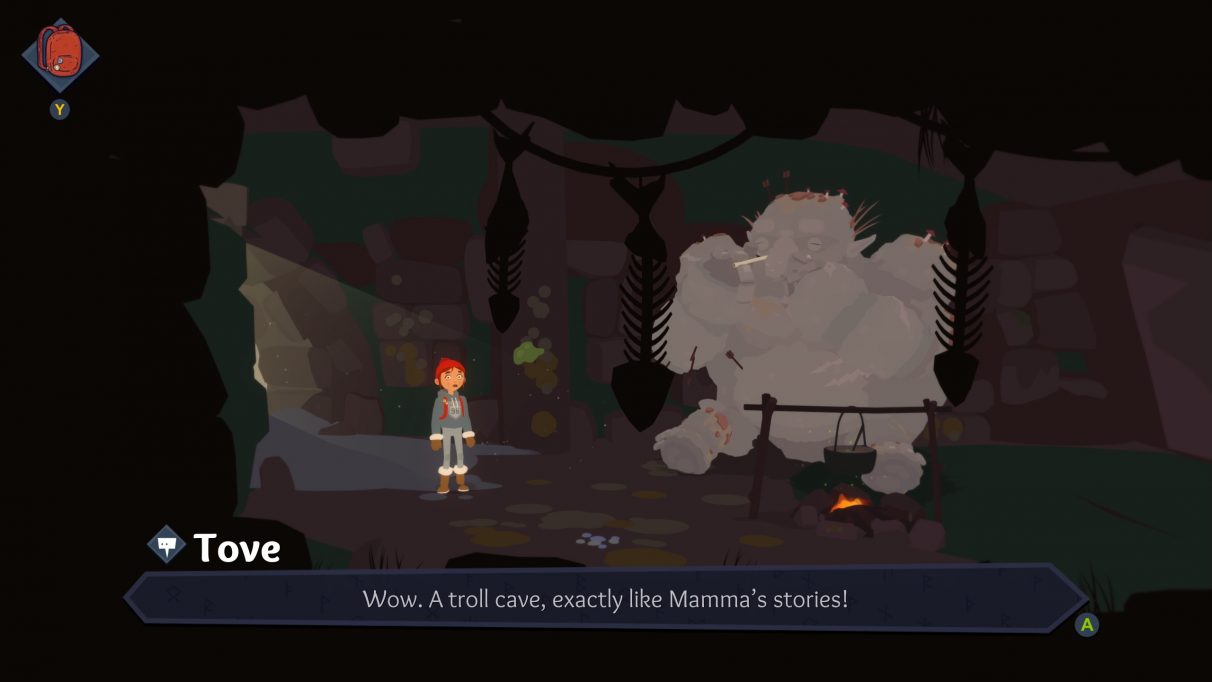 It also rewards careful exploration by anchoring some of its best and most powerful story beats to some of the most mundane and innocuous items imaginable. Right at the start of the game, for example, there's a bag of your dad's fertilizer by the door that Tove complains about if you interact with it. There's also a moment where you must clean up Lars' children's toys that are littered across the floor before making him dinner. All of these items reappear later on in one of the memory sequences you have to complete to free the godly Jotnar from the clutches of a deadly parasitic curse, only now they've been transformed into critical puzzle pieces. What was once a stinking sack that drove Tove round the bend is now the agent that will help a small sapling grow into a giant treehouse of her childhood memories. But Röki doesn't stop there. As she waters it with her mother's old watering can to it (she always had a knack for making things grow, you know), she wonders what kind of tree it will grow up to be. Then it hit me. You are that tiny sapling, being watered and nourished by the bits you both love and hate about your parents, and goddamnit, I was not expecting to be this emotionally savaged by a simple sack of manure.

But Röki doesn't let up. The memories in that treehouse you've just grown with your sapling, can and fertiliser combo are all jumbled up. As is often the case with our fickle minds, events have shifted and morphed in the act of remembering them, and the only way Tove can set them right is to effectively tidy them up, rearranging key items within each scene so the memories can play out correctly. It's the perfect mirror of what she did for Lars' toys at the beginning of the game, only now you begin to realise there's something else being suppressed and overlooked here, too, twisted beyond all recognition as Tove fights to keep the memory at bay. It's not difficult to guess what that secret is, but that's precisely what makes Röki so quietly devastating. You may have cured the gods of their dark, magical curse, but Tove must deal with her own kind of emotional leech before her journey comes to an end.

It's one of the many great parallels going on in Röki's coming of age story, but what really elevates it above its peers is how everything's filtered through the lens of its exquisite point and click puzzling. Lesser games might have dumped these memory sections in a cutscene, but Röki brings every moment back to the root of its genre, showing but never telling. It's a truly wonderful game that deserves every inch of praise it's received over the last five months since its release, and one that should definitely take pride of place in everyone's Steam library. If a game can make me shed real human tears at a virtual sack of manure in this, the year 2020, that is a feat well worth celebrating.