The advent calendar starts here, counting down our favourite PC games of 2020. What lies behind the first door? Reach out and pluck it open to find out.

Graham: If a revolution in game design happens and no one's in a VR headset to hear it, does it make a sound? Half-Life: Alyx applies every lesson from the last few years of VR first-person shooter design, and then pushes the genre further with Valve's talent for design, writing, and their unrivalled resources. The result is a great VR game that makes good on the promise of the medium, but it's also, importantly, a great Half-Life game.

Nearly every part of the Half-Life experience returns, only elevated and made fresh by the virtual reality perspective. This is true whether you're standing on a City 17 rooftop and craning your neck upwards at the under-construction Citadel, or battling against a headcrab by tossing physics objects at it. Your main tool for interacting with the world are the gravity gloves, and they're the most Half-Life-y thing - a clear relation to Half-Life 2's gravity gun - and at the same time perfect for solving all kinds of problems with VR controls. I now wish every other VR game let me reach and fwip objects into my hands from a distance.

The marriage between HL and VR feels good enough that you'd swear the series was always meant to be played this way. Headcrabs are scary in a way they haven't been since I was 14 years old, and Striders are imposing and kind of awe-inspiring in a way they've never been before. Even physics-based environment puzzles are better. They often felt like busy work in previous games, forcing you stop your exciting battle to repel invading alien forces and instead spend some time stacking pallets in a car park. HL: Alyx doesn't jettison these challenges entirely, but the times in which you're suddenly an electrician, trying to jiggle the wiring in an old apartment, made me crouch and stretch and crawl around my real world room. They made me feel more connected to a videogame space than I ever have before. 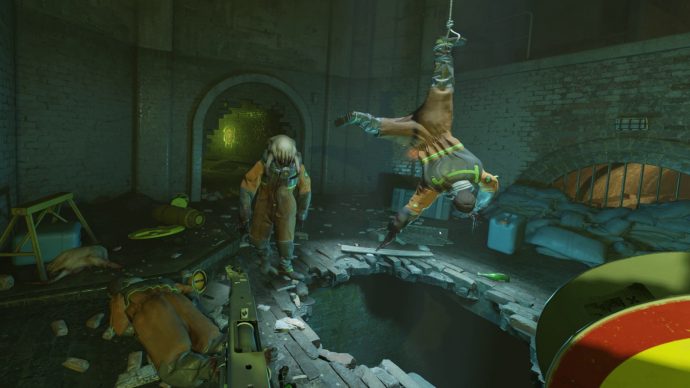 All of these strengths come together when the game leans on Half-Life's horror roots, as it does in a section in which you are hunted by a blind, brutish monster called Jeff. He navigates based on sound, stomping towards any noise you make and roaring about in search of its source. He's also terrifying, a good foot taller than you, and with poisonous spores leaking from his back which will cause Alyx to cough when nearby - an easy way to give up your location.

Oh, and he lives in a distillery filled with breakable glass bottles. Suddenly those wiring puzzles are a high wire act, in which you'll need to scan a wall behind a shelf covered in physics objects that one wrong move will send smashing to the floor. I groaned, I swore, and I laughed my way through this level. I laughed because it features some of Valve's best ever dialogue, and I laughed because when Jeff comes near, you need to cover your mouth with your hand to stop the coughs. Cowering in my real room, hand over mouth, I was struck by how perfectly I had been manipulated by the game's designers.

And then there's the ending. No spoilers, but - oof.

If Half-Life: Alyx wasn't a VR game, it would be the most talked about and influential game of the year. Except it wouldn't, because if it wasn't a VR game, it wouldn't be anything at all. It'd be like a 2D version of Mario 64. VR is in some ways a blessing and a curse, but I lean towards the former. After years of waiting, there's a phenomenal new Half-Life game to play - and it'll be phenomenal whenever you're able to get to it.