To open this door, you’re going to need a little electronic fob clicker thing. You’ve not got one to hand, but you can make one easily enough, right? You proceed to do just that, and learn a valuable lesson about the dizzying hidden complexity of technological civilization along the way. By the time you stride out of the continent-spanning purgatory of machines that proved necessary to assemble the fob, it is February. Of 2026.

But it was all worth it. It's Factorio!

Nate: Factorio has been a fixture in the management/sandbox landscape for such a decent while, that I had to fight back the urge to insert “ye olde” before its name. Nevertheless, this was the year when it finally made into official “1.0” territory. And while the full release was more a particularly fancy instalment in Factorio’s regular program of hefty updates, it was a landmark nonetheless.

As I’ve written before, Factorio astounds by making the impossible possible. You know how there are things you spend your whole life assuring yourself you’d be terrible at, or skills you’re sure you could never pick up? But then a situation arises where you need to do one of those things, in order to either avoid a nightmare or make a dream come true, and it’s suddenly a piece of piss? Factorio harnesses that little human peculiarity, very shrewdly indeed.

The pleasure of making its little automations work is enough to push you over the lip of experiment after experiment.

The pleasure of making its little automations work is enough to push you over the lip of experiment after tentative experiment, trying out each of its dizzying array of moving parts in turn, as you slowly add to your big, mad machine. And then, finally, you zoom out and see it in its full majesty, and you can’t believe that you built that.

I always used to look at computers with an air of concern and suspicion. I’d shake my head at the sight of a cutting-edge bit of chippery, and feel unable to muster the belief that humans could be capable of understanding such technology, let alone designing it. But then I figure, if I (the fool) can learn to make a gigantic, efficient Factorio machine in just a few tens of hours, then what must a proper smartus be able to comprehend, after devoting her working life to it?

Such clever, clever little apes we all are.

Oh, and if you’re gonna get stuck into Factorio, bring some jaunty tunes. The game’s recently-added soundtrack is good, but it’s so bloody bleak. Really gets to you, after a while. And be warned: if you do start playing, you will be there a while. 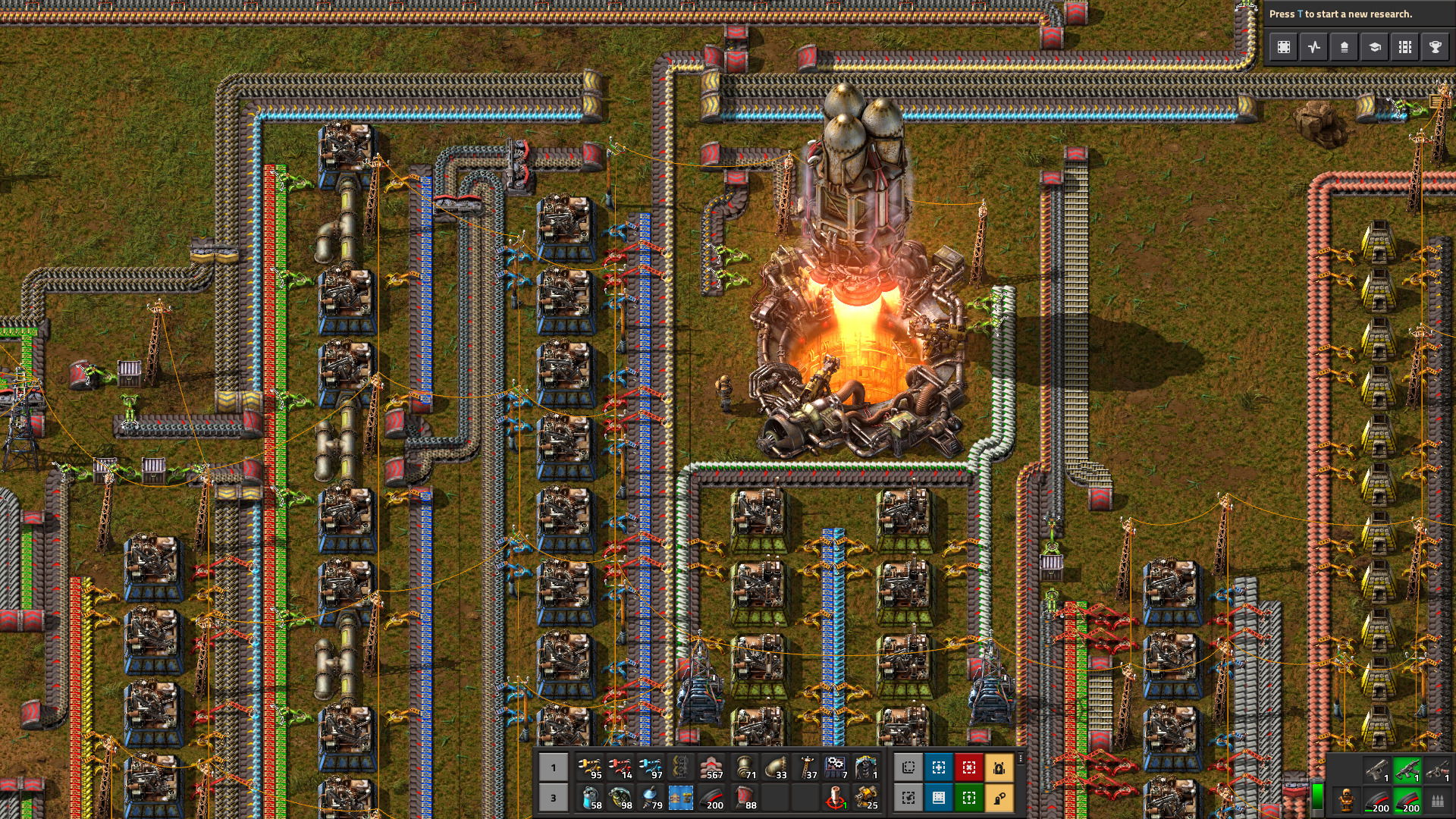 Ollie: Anecdotes. We tend to lean on them when describing a game, and it's no wonder. What better way is there for getting right to the heart of a game, and lending substance to your words? Factorio resists this approach, which is why I get frustrated whenever I talk about it. I constantly feel like I'm underselling the game. Words are my forte, and yet I can't adequately communicate the wonders of Factorio to anyone who hasn't already seen those wonders for themselves.

It's much the same with coding, I've found. If you've ever had a breakthrough while coding, you'll know exactly what I mean. In your mind, it can be the most thrilling thing in the world, but when you try to tell the story of your breakthrough to someone else, you realise it just isn't very interesting to someone who didn't experience it themselves.

Likewise, I can talk about the thrill (and I do mean thrill) of  expanding my factory, embarking on the next big smelting project or creating a new train network, or shoring up your defences at the western chokepoint. But it really won't do those stories justice. To someone who hasn't been in that position, "embarking on the next big smelting project" really doesn't sound exciting. But oh, it is, and I wish you could see that too.

Please, please, just play Factorio. It's my favourite game of all time. It's been lovingly and painstakingly crafted and supported by its developers for the past seven years. It's a technical masterpiece that allows you to create technical masterpieces. It's the single greatest introduction to programming that I can imagine, and you'll need never write a single line of code. It's sublime, beautiful, elegant, and utterly worthy of the thousands of hours I've given it.