Imogen: I love horror games. I am a wuss at horror games. I'm the pal who suggests playing them, then immediately hands you the controller and refuses to take it back. I cannot do this with Phasmophobia, however, because it is a multiplayer ghost hunting sim where you kinda need everyone to be present and not act like giant babies so you can get the jobs done.

Like most people, me and my pals were drawn to Phasmo because of all those YouTubers and streamers having a wail of a time with it. It's the sort of thing where you watch players being all over the top and screamy, and you think, 'I wouldn't react like that. It's not that scary.' And then you get to your first house, hear one (1) spooky noise, and run back to the van because "we need someone monitoring things in the van, guys, I don't think we all need to be in the house."

Having played it a fair bit now, I offer to be dedicated van-watcher much less (which I shouldn't have written because I guarantee a friend will screenshot this and call me out). It sounds weird, but I think Phasmophobia has made me less of an absolute wimp at horror games. When my mates are all picking up their tools to go investigating, I don't wanna let them down, so I always join in to methodically check all the rooms and evidence. If a ghost is hunting, I quietly crouch in a corner waiting (and hoping) for it to pass, rather than high-tailing it to the nearest exit.

Phasmophobia isn't some amazingly slick thing. It's buggy and it doesn't look great, but I just like the way it makes me feel (brave!), and I haven't had so much fun playing a horror game in ages. 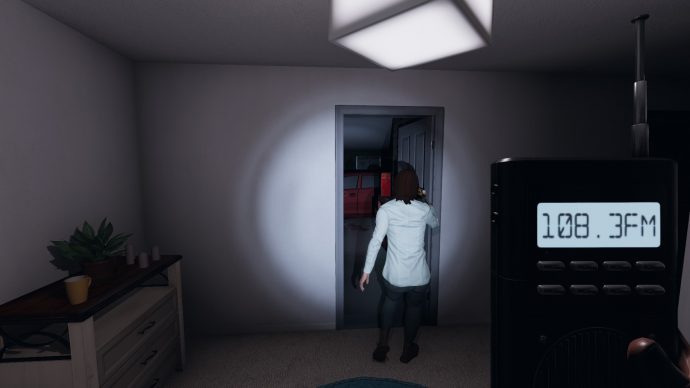 Alice0: I do not understand why Phasmophobia's ghosts behave the ways they do. That's great. Why do some ghosts hide for ages, giving few hints to their identities? Why do some happily show off all their ghost tricks at the drop of a hat? Why do some should-be murderous spirits have seemingly infinite patience for ghosthunters clowning on them and taunting them? Why do some love certain rooms? Why do chatty ghosts say the things they do? How much of our voice chat can the ghosts actually understand? And how much does our hollering upset them? I do not know. Tightly-scripted spookings in other horror games are fun and all, but Phasmophobia's inscrutable, unpredictable, and occasionally frustrating ghosts are perfect for this premise.

A huge part of Phasmophobia is identifying ghosts from their behaviour, observing how they interact with us and using different tools to discover the physical traces they leave in the world. That's a fun challenge, a careful balance of provoking them into manifesting without doing something stupid and getting murdered. But it wouldn't be nearly as interesting if we could figure out the way they worked. They'd be a simple puzzle, a system we could model inside our heads. Phasmophobia's ghosts behave weirdly enough that they can still surprise even a seasoned hunter, just by doing something weird. That's what I want from supernatural spirits. I don't know how many of the AI quirks are intentional, and I hope I never find out. Leave me with these spooky mysteries.

And having players use our actual microphones to talk to ghosts is such a great idea.