If you want to open day nine of the RPS advent calendar, you're going to need to light some fires first. Maybe push down some giant buttons, too.

Alice Bee: For a while there I was having trouble figuring out who Immortals Fenyx Rising was aimed at, because while I had initially thought it was aimed at kids, it became clear that the combat, puzzles, and overall vibe was maybe a bit too complex in places. But equally, this cartoony, joyful, adventure-romp couldn't be aimed at adults, could it?

We did all kind of laugh at Immortals for being a Zelda game made by Ubisoft, but honestly, there are elements of Breath Of The Wild that are clearly inspired by the kind of open world games made by western developers like Ubi! And also, Breath Of The Wild was really good, so I'm not going to be mad at a game that uses some of those good ideas for its own ends.

So I'll say it: Immortals is great. My best friend in it is a phoenix that I can turn into like, a flying lizard, or a bright green parrot. My horse in it is a big blue unicorn. In one mission I had to fight a legendarily angry rooster. There's a joke about Charon "saving up to buy a bridge". Come on!

Nobody gets mad at you for liking it too much or not enough, it has enjoyable takes on loads of Greek mythology, and it's funny. My only hope is that I get other games in the same series that adapt myths from around the world. 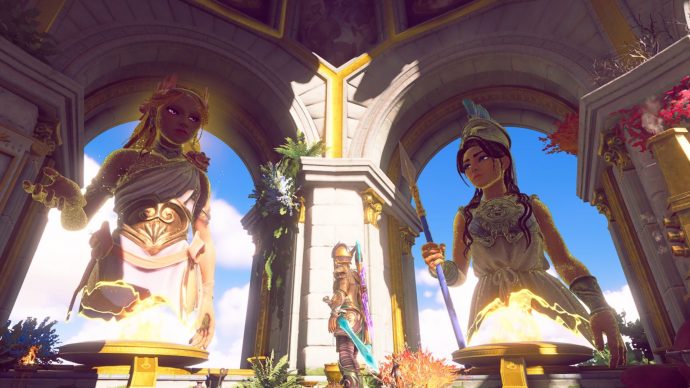 Ollie: Maybe it's just that December is the perfect time for me to get sucked into a large, polished singleplayer adventure game. Last year, it was Star Wars Jedi: Fallen Order. Every time I finished the story in that game, I'd start again in that same session. The same was - and still is - true for Immortals Fenyx Rising.

It really boiled down to two things. The first is that combat was startlingly satisfying. With a few skill upgrades under my belt, I was pulling off crazy gratifying feats like pulling a harpy down to my level and bashing it in the head with a giant axe; then fluidly moving to perfectly block a Cyclops's backhand attack, slowing down time enough to wind up a colossal attack with a hammer five times my size, and let it smash against the Cyclops's chin, sending it flying away into the distance.

Everything felt far punchier than I'd expected. There was a definite moment in my first fight with a bear on the prologue island (which nearly wiped the floor with me, I might add), after which I was just thinking, "Oh. Oh. Yeah, I'm gonna enjoy this."

The second reason I kept playing Fenyx Rising was because of the world, which was big and colourful and dense with collectables. I'm not a fan of the Far Sight mechanic for spotting nearby points of interest, but I'll tell you this. With every new region I discovered, I'd go round and painstakingly reveal absolutely every new point of interest I could find, until the map was littered with them. And then I'd systematically go round and collect or solve them all.

It's not a playstyle I'd suggest for everyone, but for me it matched the satisfaction of cleaning up a level in Viscera Cleanup Detail. Fenyx Rising is one of very few games I've bothered to 100%, and I'm probably still going to play it again when I'm finished.