You’re just about to open this door on the advent calendar, when a man with a torso like a butcher’s nightmare bursts through it from the other side, revving a chainsaw larger than you are. “Hrrrnnnh”, he gurns, before looking wistfully at a photo of a dead family member. What game can this vast murderer possibly be from?

Nate: There's been a growing trend towards the release of good turn-based tactics games in recent years, but 2020 was a bit of a banquet. X-COM: Chimera Squad's snake cops burst, hissing, into our lives, while Phoenix Point's trouble crabs had a good scuttle over the subgenre’s basic tenets to boot. But to me, the standout entry into the genre was Gears Tactics, and it came completely out of left field.

The Gears Of War franchise is the epitome of a lovable brute. The whole thing has this charming air of wistful gigamasculinity; it’s desperately searching for pathos and nuance in a ball pool full of diesel-drenched iron bollocks, and roaring the whole time. Roaring emotionally.

As such, it was interesting to see its identity lifted from the chugging exoskeleton of an FPS, and fitted into the altogether sleeker carapace of a turn-based strategy game. The result wasn’t a massive deviation from what’s understood to be the set formula for these sorts of affairs, but where it did differentiate itself, it excelled.

Gears Tactics is fast-paced, compulsive, and utterly stripped down to the business of fight, fight, fight. There are but the barest rags of cutscene and squad-equipping segment to shroud its sack-of-haggises physique, and it somehow manages to inject adrenaline and bloodlust into a game format where the enemy only moves when you permit them to by pressing a button to say that you’re ready. 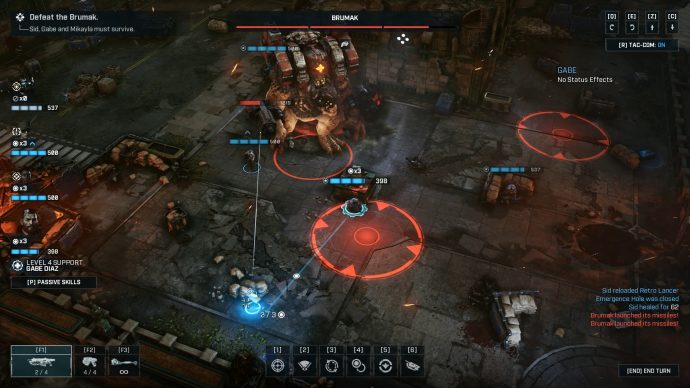 Atmosphere, indeed, is where it excels. The game does a cracking job of making you feel perpetually on the edge of being completely buggered, while rarely dragging you all the way through the fire into defeat: success always feels earned, and never assured.

It also makes some smart decisions about how to pour Gears’ setting into the squad-’em-up mould, from the overwhelming hordes of brick-faced bastards you’re up against, to the risk-rewarding thrill of chainsaw charges.

Having had the rest of the year since its April debut to play it, it has faded a little in my heart, mind. The between-missions loadout UI, annoyingly unhelpful at the time, began to stand out like a sore thumb in an otherwise brilliant piece of game design, while non-plot mission generation turned out to have been just varied enough to prove enchanting during the review period, only to begin feeling samey afterwards.

However, a quality of life update released last week sounds as if it may have fixed at least the first of these issues, which means now might well be the perfect time to jump in, if you didn’t earlier in the year. I think the game needs at least one expansion’s worth of padding to truly stand the test of time with regard to replayability - but as I said back in April, it’s hard to criticise it for that, given just how much fun it is on the first run through.