It's a little-known fact that Christmas presents are stored far beneath the planet's surface and must be excavated during December so that they can be delivered on time. The same is true of the game behind door number fourteen. 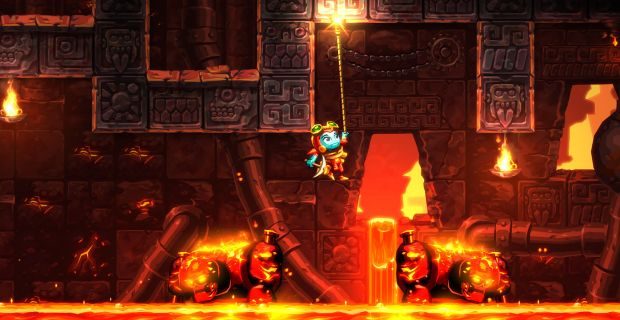 Katharine: This is how you do a sequel. I was a bit cool on the first SteamWorld Dig, which saw your rust-bucket hero gradually explore a subterranean wonderland full of jewels, poisonous bogs and zombie-like hobos who'd clearly retreated underground in fear of their new robot overlords, but the way Image & Form's built on this for SteamWorld Dig 2 has quickly made it one of my favourite games of the year.

It follows the same basic premise – you mine a bit, earn some cash, upgrade your tools, mine a bit further – but adds so much more. After proving itself with the turn-based strategy genre in the equally excellent SteamWorld Heist, developer Image & Form finally gets to stretch its platforming chops here with inventive, dedicated puzzle caves that lie off the beaten track, giving the 2D exploits of other Metroidvanias a real run for their money. The treasures that lie at the end of those caves all feed back into its new cog system, too, which brings a welcome touch of the RPG to Dorothy's expansive toolkit, giving you the freedom to re-spec your heroine with new abilities each time you return to the surface.

There's also just something innately satisfying about picking your way through the dirt one block at a time, listening to the soothing tones of your pickaxe strike hard and fast against its easy-going soundtrack. It's the perfect game for a lazy Sunday afternoon, and you'll miss it when it's all over.

Brendan: You know when you see a dog with its tongue lolling out, and you think: “Oh what a good boy!” Well, Steamworld Dig 2 is a good game, said in that exact voice. It’s friendly, warm and generous. If it were a big cuddly Labrador, it would only ever want to have fun with you. It’s old-fashioned, in that it’s also a Metroidvania, but here this is a strength, not a cliché. You’re robot miner looking for your uncle, and you’ve got to dig, climb and bash your way to new abilities. A hookshot lets you traverse that windy desert you couldn’t face before, a jetpack lets you smash through a soft, mouldy roof to a hidden cavern, a pressurised water bomb uncovers one of the many subterranean secrets.

In many ways, this is a videogame for traditionalists, yet there is something comforting in how well it’s executed. The platforming feels good, the characters are simple but likeable, and there isn’t a hint of grind. I can’t think of a better PC game for kids this year, but I’d also recommend it as a tonic for any adult who is weary of microtransactions, season passes, and the punishable-by-death business phrase “games as a service”. Steamworld Dig 2 is a reminder that games can be approachable, decent and un-selfish, even when they’re about hoarding gem stones.

John: Like Katharine and Brendan have both said, it's just so unrelentingly lovely. It is, in a year that has seen difficult games shine, a demonstration of just how much fun it's possible to have without difficulty, too. It's about constant satisfying progress in a gorgeous cartoon world, packed with daft NPCs, constant upgrades, and the joyous sense of success that the best metroidvanias deliver.

It reminds me of childhood games on the Atari, the odd one or two that were designed to be enjoyed and finished. But far more sophisticated, with its pleasingly malleable upgrades, and scale. And it has a hookshot. All the best games have a hookshot.