What's behind door number seventeen? Why, it's a little more conversation, a little less action 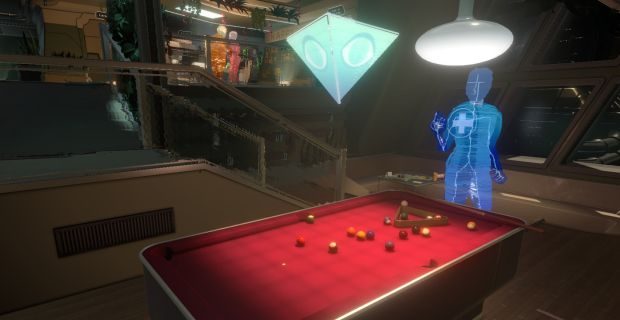 Brendan: An argument: Tacoma is better than Gone Home. The space station setting is more interesting than a middle-class house, the characters are better portrayed, and it gives the player more to do than nosy around, reading old notes. Part of this comes down to the way it rethinks audio diaries. You don’t just hit play and listen as you carry on rummaging through the bins. You get a holographic representation of the crew, pacing and walking and moving around the station. To listen in on one conversation, you have to follow whoever’s talking. To fill in the gaps and characters you missed, you have to rewind the holo-log, then follow someone else.

It’s neat and simple. And while I think the ending is entirely fluffed (although I can’t say why without spoilers) it remains one of the best space jaunts of the year and my favourite of the environmental story-telling gang so far, packed full of tiny details. By contrast, the rambling story of Firewatch and genre red herrings of Gone Home always felt to me like a lack of focus. With Tacoma, Fullbright have lasered in on what makes a good walkabout.

Katharine: I confess, I never much liked Gone Home, and I was expecting to feel largely the same way about Tacoma. How wrong I was. While its clinical, sci-fi setting might not be as immediately appealing or approachable as Gone Home's spooky old mansion, it's the subtler details tucked away inside its plentiful nooks and crannies that really make Tacoma worth celebrating.

Gone Home was a little too artfully arranged for my liking, but each of Tacoma's crew quarters feel thoroughly lived in – a welcome contrast to the stark corridors and functional work spaces you'll visit in between – and getting to watch these characters' personal lives slowly bleed into their public working personas is absolutely fascinating. To give an early example, you might discover that one of the missing crew mates has been reading (rather endearingly) a book on 'banter for the inspired social climber' in his personal AR desktop to help him settle in with this new group of strangers, and you can see the results of this play out in the reconstructed conversations you'll discover throughout the rest of the game. It's a brilliant meshing of the game's various exploration objectives, and it wasn't long before I found each crew member's individual story to be just as compelling as the central mystery. And that ending. Oh, that ending! Absolutely superb.