The last door awaits. Before you enter, what will you take with you? Your choice could change everything... 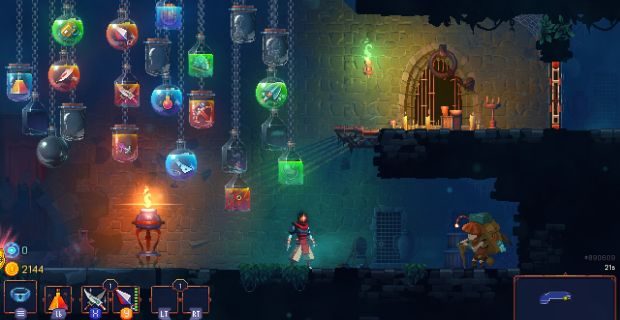 Matt: I didn’t expect to spend 35 hours and counting in Dead Cells, but they snuck up on me. At the start, every new area (apart from maybe the first) is an awful, terrifying gauntlet that you have to slowly crawl your way through. Normal enemies seem relentless and tough, and the elite versions of them almost impossible to get past without chugging through an entire stock of health potions.

But over a few hours, with each repeated encounter feeling fresh thanks to the magic of procedural generation, that changes. You go from being afraid of the world to on top of it, sliding and slashing your way across platforms without pausing for breath.

Once I’m comfortable in an area I’m constantly in motion, dispatching an enemy every other second as I combat roll through screen after screen. The game plays to its strengths, rewarding you with a speed and damage boost for each enemy you kill in quick succession. Rewarding skill with power might be a questionable design choice in a multiplayer game, but here it adds to the feeling that you’re a slick, unstoppable ninja.

There’s more to praise than the movement. A smart unlock system means the currency you collect from every slain enemy feels genuinely meaningful. The upgrades dovetail with your growing skills to allow you to push deeper into the game, expanding your arsenal as you do. I get far more excited about finding a rare blueprint in Dead Cells than I do a new gun in Destiny. Plus, it’s got the most gorgeous pixel art since Duelyst. I’ve only spent an hour or so with the latest update, and who knows how much more time I’ll have put into it by the time it’s actually finished.

Brendan: Dead Cells deserves its place atop this throne of bones. When I first received a press release about this fast-paced monster slasher, the developers called it a “roguevania” and my lips contracted into a thin, contemptuous grimace, like a couple of dying earthworms. But it also looked fiesty in GIF form. So I took the headless hero of the game for a spin and discovered polished, pixel-perfect combat. I tasted the blood of its throwing knives, licked the frost off its ice grenades, and savoured death at the hands of a big-armed fire-flinging menace. I carried on, perfected its roll, its double-jump and its shield parry (well, almost). Reader, I killed that firey apeman and I came away with my earthworm lips curled up like I was the Grinch. “Roguevania”? The creators of this game can call it whatever they want. Alec: I was a Johnny come lately to Dead Cells, not able to fit it in back when half my colleagues were joyfully ranting about it, and truth be told, I put it off because I figured it'd be too hardcore. Not in terms of being too difficult, but in terms of feeling playing it successfully would need to be a second career.

Well, I broke the seal and now all I can think about is Dead Cells, so I was halfway right. Up until a few days ago, it had been The Binding Of Isaac that occupied my every spare-time thought, but Cells has neatly and completely supplanted it. Much has been made of Cells' tapping into Dark Souls and Metroidvania bloodlines, but, coming straight to it from Isaac, I can see just how strong that lineage is too. I.e. the combination of never know what you're gonna get with slowly increasing the total pool of available goodies, and finding that sweet spot that, though death is gutting, you're always highly motivated to try again immediately.

And that's the secret sauce here - you never feel that you've wasted your time, and the slow growth of both your own ability and the toys you can call on to survive your voyage through this eerie underworld means there is real conviction that next time, this time, you're going all the way.

This is one of those games that fits my lifestyle with almost creepy precision. The sense of accomplishment within a lunchbreak; the sense of going somewhere else; the sense of a story told only through implication around the edges; the sense that I will always pull a little more from it; the sense that it doesn't put a foot wrong in terms of controls and interface, so every failure can be pinned on me and me alone. A jigsaw piece that fits perfectly right now. Dead Cells is going to live in my head for a long, long time to come.

Graham: Watched in videos, Dead Cells seems like total chaos. There are mobs of enemies leaping and dive-bombing, thorns are sprouting across the architecture, explosions are popping constantly, and magic effects are whooshing this way and that. Yet it's surprising how quickly it becomes readable when you're actually playing it, even for an amateur like me. From my first few minutes with it I could see an enemy's pounce attack being clearly telegraphed, which meant I could time my dodge roll and attack it from behind. It felt methodical, satisfying - a feeling driven home by the sound and animation.

Then I'd advance and get overwhelmed. Too many enemies made for total chaos again. But I'd keep trying, and bit by bit those harder fights would come under my control. Drop a turret here; roll over there; spam grenades everywhere. Enemies would pop with a delightful squish, points would scatter across the gutstained floor, and I'd hoover it up gladly while rushing onwards. I love all the systems Alec and Matt outline above, but when it comes down to it, I'm playing Dead Cells for how good it feels to hit things. They mention Dark Souls, Metroid, Isaac, and I agree and would add Diablo to the mix.

It's also worth recognising something else: this is an early access game. Its systems have improved over the course of the past year, and the satisfaction of hitting things has been present from the first release. This isn't the first time we've awarded an early access game in the advent calendar - Kentucky Route Zero was our top pick, notably, with only three episodes released - but it remains a rare instance of an early access game that's worth playing immediately rather than holding out till it's finished.

Katharine: Dead Cells isn't normally my type of game. I bounced off The Binding of Isaac after about 20 minutes - not because of the gore but because I very much like games to have a beginning, middle and end that doesn't require me to start again every time I die - and I've more or less steered clear of the genre ever since. Dead Cells, however, has won me back.

It still sends you back to the beginning each time you shuffle off your mortal coil, but the way it banks and carries over unlocked items is a stroke of genius. It makes the whole game feel like more of a journey, and even if you do end up spending the vast majority of your time dying over and over again in the first three main areas (did I mention I'm also rubbish at these sorts of games too?), the progress you make and the cells you collect still feels like time well spent. The controls and combat are also super satisfying despite the fact it's still in Early Access, and its pixel art is just gorgeous. It's made me want to give rogue-likes another chance, and that's a rare thing indeed.

Adam: There were three games I'd gladly have put at the top spot this year: What Remains of Edith Finch, Divinity: Original Sin 2 and Dead Cells. Three games that'd be contenders in any year and all so very different to one another. There's the short-form narrative invention of Finch, the enormity and sheer mechanical density of Divinity, and the endlessly replayable combat perfection of Dead Cells.

My learned colleagues have already described its brilliance - the precision of the controls, the beautiful ugliness of its setting, the challenge, the unlock system - so I'd prefer to take a moment to recognise how rich and diverse a year it has been. Dead Cells is, even in its early access form, at the bleeding edge of a certain kind of design, but even though it's at the head of our 2017 table of honourables, it's keeping company with cousins many times removed. There were so many games to admire in 2017 and I expect we'll cast our net even wider in 2018.

Here's to all of them, with an extra special round of applause for Dead Cells, which takes the crown this year.