As one of the last two members of the original RPS team to leave the Treehouse (Alec this week, me at the end of next week), I’ve found myself getting all nostalgic. Trying to remember how it all began, twelve long years ago.

To do this, as well as chatting with the other three founders - Jim Rossignol, Alec Meer and Kieron Gillen - I’ve been going through 2007 emails, looking to find origin stories for RPS. And despite an awful lot of the discussion that preceded the site taking place IRL and over instant messenger, I still found some JUICE. So for the next five days, I shall share this juice. Grab a beaker.

I found the very beginning. The very, very first email chain the four of us exchanged regarding the site in May 2007. It’s entitled, “Thursday 31st”, and begins, from Jim:

“Who is available to meet for lunch? We have matters of import to discuss.”

It was at that lunch that we four came to one conclusion: We wanted to make The Best PC Games Website. It really was that simple. And surprisingly, at the time, no one else was.

At the time the four of us were all freelancing for Future Publishing, a magazine publishing company whose evisceration during 2000’s dot-com bubble burst still hadn’t healed. Even seven years on they were still too afraid to properly return online. PC Gamer’s website at the time amounted to little more than directing people toward subscription options. There was a big gap in the market.

While there were already well-established gaming sites, there was nothing successfully focused purely on the broad range of PC games. We wanted to be that site. We wanted to launch our own magazine, but on the internet, in a way that embodied the games writing that had influenced us, and in a way that we hoped would influence others. 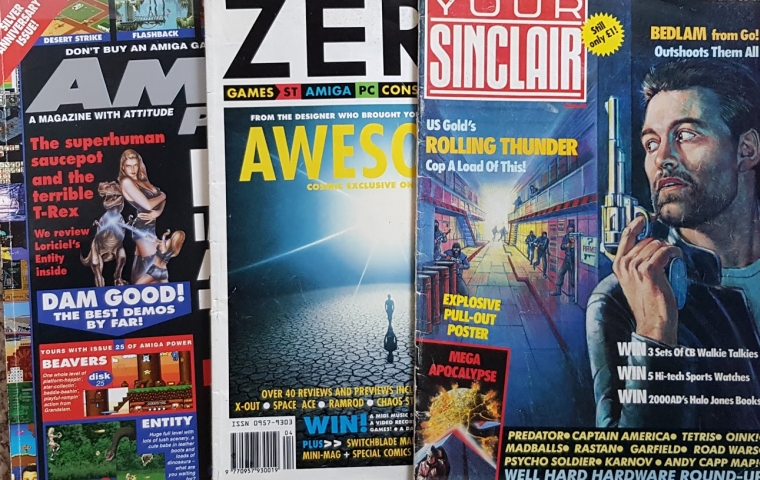 Looking through these earliest discussions as they occasionally pop up in email form, it’s all hilariously clandestine. The four of us daring not type the plan in words, so precarious were our positions as freelancers, dependent on our not rocking the wrong boats. At that time, editors at various outlets were increasingly unhappy at our earning enough to buy food by writing for rival publications, apparently in the belief that we should survive alone on the scraps any one of them threw us, while only reducing the amounts they wanted to pay us.

The majority of the issues were with Future. Long gone was the loved company of the 90s that had somehow produced magazines like Amiga Power, replaced by a shareholder-driven corporate nosedive where costcutting was always their first priority. And their last was always freelancers. It was becoming increasingly frustrating to even get paid, let alone get paid enough. And across the company they were reducing the amount they were paying per page, having failed to ever increase rates in over a decade. We’d rather had enough of this. And Jim Rossignol had a fire under him to do something about it.

The first attempt to enact our original plan, which I’m absolutely certain has never been previously disclosed, was for the four of us to perform a sort of coup at an already existing gaming site that had no editorial. We intended to piggyback on their already established nature, and transform them into the sort of gaming site we wanted to read. The deal Jim was working on included the line,

“- Ongoing deal with [redacted] dependent on us delivering mega-hits for the site.”

Jim then emailed us the next day saying,

“Can you all create [redacted] accounts and have a good root around in the site. We'll need to understand how it is structured and how its community works if we're going to avoid alienating them when we come and stomp all over their backyard.”

This deal felt very possible. Another email the same day included the line, “We're not there yet, but only minor hurdles remain.”

Days later there’s what now reads as an adorably innocent email from Kieron, in which he explains in stunning detail a phenomenon called “CPM” to himself and us, as we all tried to fathom the bizarro world of online advertising rates. To which I replied with a dick joke. We were ever thus.

It all went incredibly quickly, from the notion to a serious pitch, finances being laid out, targets drawn up, within a week. And then there was a dreaded month to wait, while that other company went through their processes. That’s a brutal experience - so much, so fast, so potentially life-changing… and then the knowledge that you’ve got to wait weeks and weeks.

Hilariously, at this exact point one of the editors we all worked for suddenly decided he wanted to crack down on our appearing on multiple outlets, and another started criticising our paragraphs for being too long. Gosh the time to get away from freelance never felt more right. But there we were, in that exasperating gap, not knowing if we might be able to reply to these pernickety gripes with a cheery “BYE!”

But during the wait, we also had time to worry about our own vision. Most of all, to get the deal we were chasing, we weren’t going to be able to be a PC-only site. In June, Jim emailed thoughts based on further IRL chats we’d had. He said,

“The core thing is that we're essentially jettisoning the original concept we had, which was ‘The Best PC Games Website’.”

He went on to propose a series of ways we could try to bend the funded option we were chasing into our original intent, but then,

“Alternatively, we drop the [redacted] ball now, set up a blog, work furiously on it for the next six months, get a readership, and perhaps do a deal with [redacted]/anyone else to sell decent advertising onto it. This would be far less life-changing and wouldn't particularly disrupt our current working practices. It would however be a time sink, and a potential waste of effort.

Or we call the whole thing off.”

I mean, I could pretend to build suspension about what we eventually chose, but I suspect you’ve guessed. Which makes this particular quote from another email by Jim especially fun to read, twelve years on, as I rather proudly notice how much we did exactly this:

“Also, as both Alec and John have pointed out, the cost of being completist is way beyond us. I think instead we simply have to be interesting. We review all the big titles, and have the most interesting opinions and things to say. But we don't review /everything/. We simply can't. What we can do is write fucking awesome editorial, and we do that by writing about the games that are interesting. Leave minor titles and predictable sequels to the pack and get on with looking at the aspects of gaming that we can say something about.”

Further twists appeared in that month-long wait. The people we were trying to do a deal with were suddenly offered $400k to create something else, and we immediately went to work trying to fathom a way we could trick them into giving it to us. On this particular day (a Tuesday) I was in the US for work (Fallout 3 announcement), barely able to keep up for the most 2007 reason ever. I emailed the chain:

“i'm in america with no net access but for my ds. back thurs”

Come Wednesday everything changed again. Suddenly the people we were talking to had seen giant dollar signs in the PC only space, and perhaps-just-maybe we would be able to steer this mad ship back on course. More emails flew in, numbers and ideas and directions, and while I honestly don’t remember it, I can only imagine poor me trying to keep up with it on my tiny Nintendo DS screen with the wireless pack slotted in the back.

Perhaps most troublingly of all, the phrase, “The Mojo of games websites” had been used twice in two days.

It’s worth noting at this point that “compromising” on our idea wasn’t that big of a deal. We were all pretty broke, scraping by on freelance, and just getting a steady pay cheque to write a games website would have been amazing. It wouldn’t be an abandoning of hard-wired principles, it would be an abandoning of a two-week old idea we’d come up with. So it, to me, is really fascinating just how much we were obviously uncomfortable with it all. As I read through the emails, it’s incredibly clear that we loved our original idea rather a lot. Also, I added,

“Man, the DS is incredible. Totally browsing email on the loo.”

Still, we waited. The last email in that chain, on June 21st, reads,

“We will have a definite answer from [redacted] by July 4th.”