I am working on my review for The Sims 4's newest expansion pack, Eco Lifestyle, in which you can choose to live carbon neutral or carbon positive, but so far, it is fun. Fun but difficult. I'm trying out various different new things in the new neighbourhoods added with Evergreen Harbour, but so far I can say that living in an eco-friendly way is hard, especially if you're off the grid.

I made a pair of Sim eco warrior roomies called Britta Horace and Nigel Sneed, along with Britta's small and lazy mongrel dog Graham. They moved into the off-the-grid shipping crate home in Port Promise, which is an industrial port area in a terrible state, and promptly became abjectly miserable. The Sims get sick even going outside because the air quality is so poor. They are constantly dirty and unhappy because they shower in brackish, room temperature water, and on their first night a huge thunderstorm destroyed their dew collector, so showers may soon become a thing of the past. But there is one thing that makes Britta happy. And that is crawling through other people's filth.

Eco Lifestyle has added a bunch of fun hipster activist clothes, piercings and haircuts, which I love, but it has also added some extremely synergistic personality traits and goals. Nigel Sneed is an Eco Innovator, so he just wants to gain influence in the community and vote on action plans. He goes to work, and is a mostly productive, if slightly unclean, member of society. One time he set himself on fire cooking burgers. He's not a bad man.

Britta, on the other hand, is a disgusting gremlin. She is a Master Maker, so she wants to fabricate things and make candles and fizzy juice, but I also made her a Recycle Disciple, which means she likes pawing through rubbish to separate recyclables and compostables, and a Freegan. Freegans like neither spending nor earning money, so I have made an extremely conflicted Sim who wants to ABC (always be crafting) but does not want to sell the shitty candles she makes. Britta would genuinely prefer to steal things than buy ingredients to cook with. Britta gets a mood buff specifically from eating food that's spoiled. Britta is, and I cannot emphasise this enough, fucking grim.

The dumpsters around the neighbourhoods are periodically filled with more trash, and you can do loads with them. You can even nap in them. But mostly it's about the diving. Sims can dive for meals (remnants of gone-off food), deals (discarded treasures) or ingredients (stuff to make other stuff) until they're empty again. Britta's favourite thing to do is to spend hours dumpster diving for fish tacos and discarded dye to make yet more candles. I dunno why, but eating fish tacos out of the trash is particularly horksome, isn't it? Like, it's already rotten, but it's rotten fish. 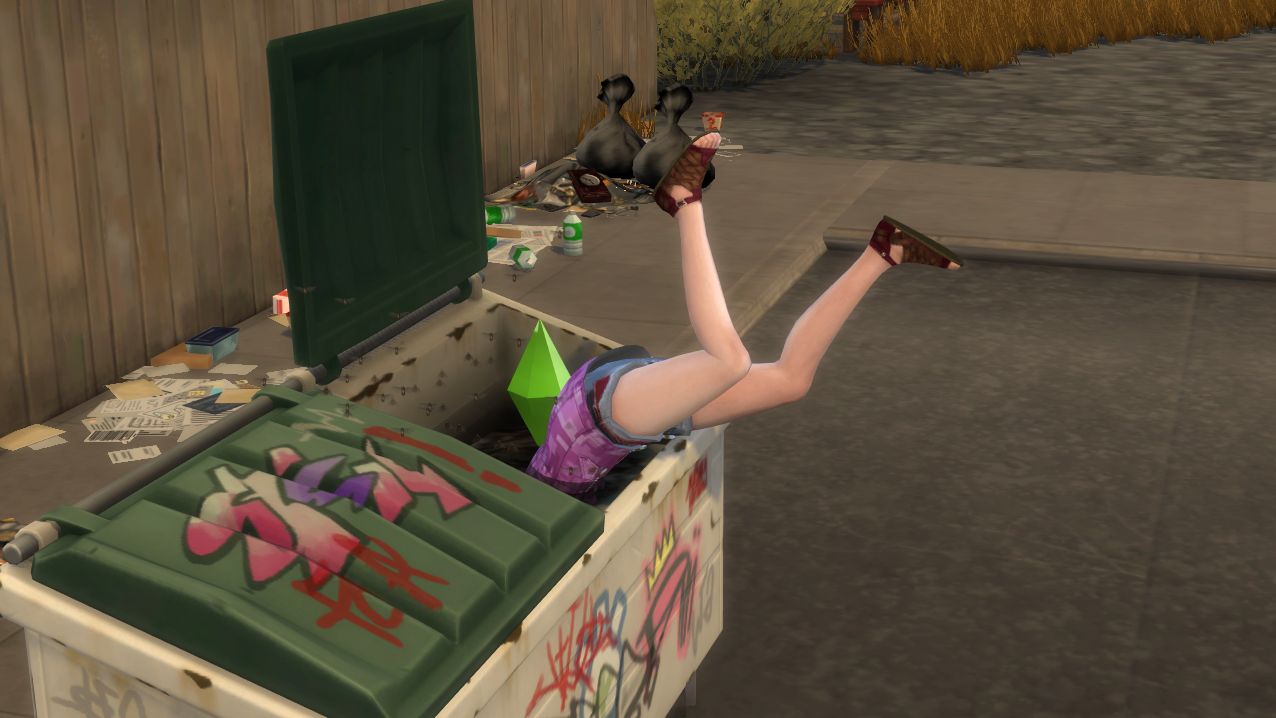 Britta spends all her time doing this, to the exclusion of almost anything else. There is nothing she loves more than eating a discarded red velvet cupcake right in front of the dumpster she yoinked it out of. Also, other Sims in the area react exactly the way you would expect to seeing a woman diving up to her arse in a bin, face first. She doesn't even change her clothes, she just front crawls her way through that shit.

Because Britta is unable to take a real shower, ever, she has been fully clean approximately once in her short existence, which was when I, the cruel and unusual dictatorial entity who cursed her into existence, first made her. (If Britta is just as god made her then what kind of god am I???) This has put something of a strain on her friendship with Nigel, who has to regularly eat dinner at the same table as a sentient bin-smell. You know when you put the bins out in the summer? Imagine if that was you, all the time. That was your life. Here is a picture of Nigel being politely off-put by Britta's mere presence.

The joke is very much on all of them, though, because Freegans also have a significant bonus to the quality of stuff they can find while rooting around in the trash. This explains the surfeit of cupcakes. But also several chairs (variously useless), a huge and pristine coffee table, and a genuine framed piece of art have been rescued from landfill oblivion. Also, on her first day, Britta found an entire bike. Constantly smelly, queasy and tense, Britta is definitively living as Oscar the Grouch, and it is wonderful. 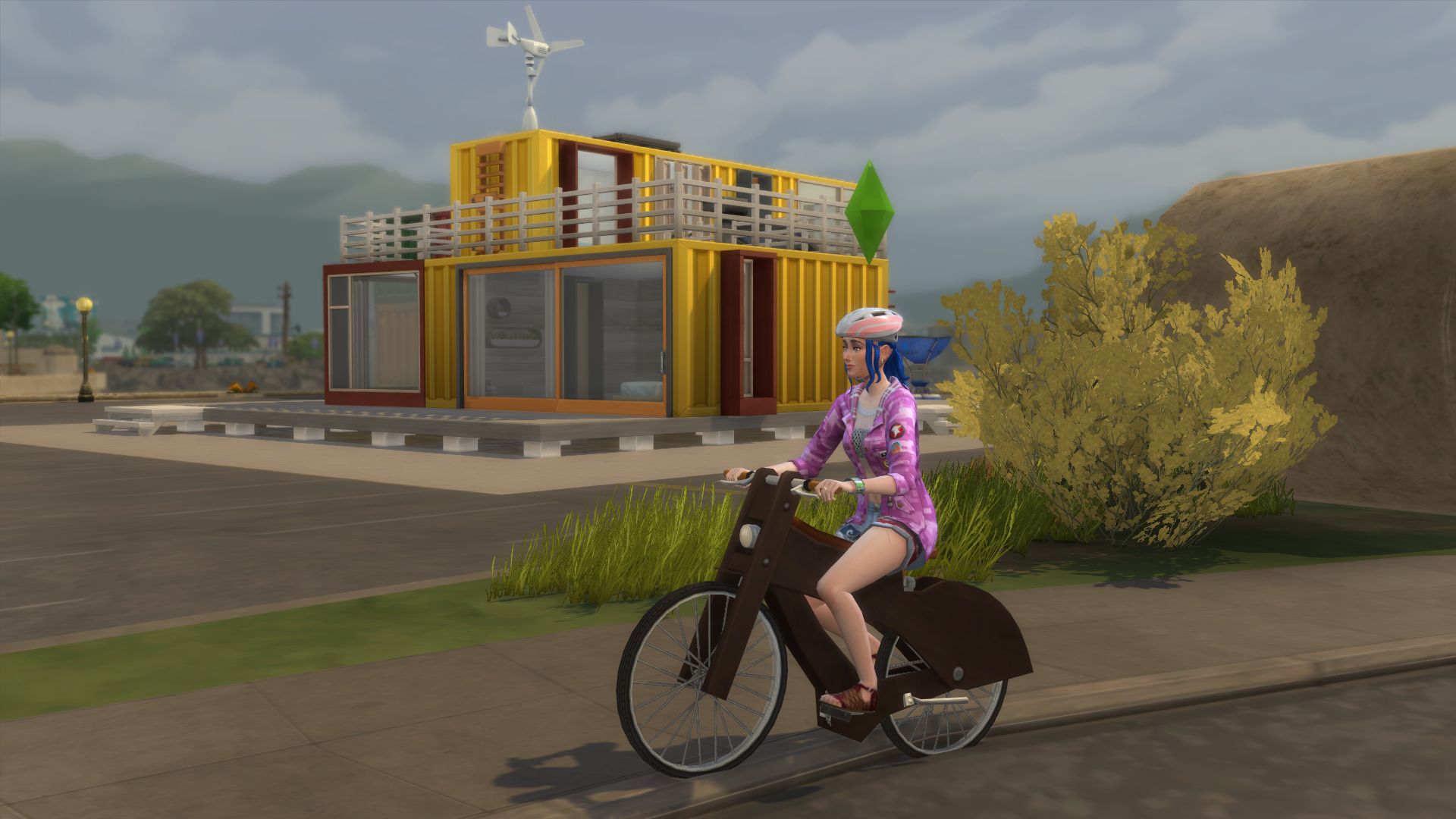 Plus, Oscar never had a sweet bike, did he?