Sundays are for starting on your Christmas shopping, if we're being ambitious. Or more likely just lounging around your living room all day with tea, books, and the best writing about videogames from the past week.

At first, the game’s attitude to all this appears cynical. In the opening hours of Disco Elysium, Harry Du Bois is an ideological magpie, lining his nest with leftover scraps of political theory. These are necessarily frail and worn-out ideas, and the game heaps derision upon them. Disco Elysium appears to have little time for hermetic ideology, for ideals universally applied. Its political digs, early on, are things any Twitter user — or worse, any South Park viewer — might recognize. A drowning man may grasp at these straws, the game seems to scoff, but they won’t save him.

Luigi has no real need for money. The only things to spend it on are bonus lives and collectable location map indicators, and the amount of wealth that Luigi can vacuum up in just the first hour of the game is phenomenal. It’s extraction of wealth for the pure extraction of wealth.

The game is clearly aware of relationships between power and luxury, labor and capital, state and corporation, bosses and employees. There are even nods to collective ownership? But the politics of the game are as inscrutable as the decision to make three of the D-pad buttons do nothing more than make Luigi say, “Mario?”

For Vice, Patrick Klepek spoke to the writer of Parvati, a character in The Outer Worlds who identifies as both ace and bi. Kate Dollarhyde wrote from her own experiences, helping portray Parvati as an authentic person who many fans have connected with. It's fab to see this in a huge mainstream game, as well as the "overwhelmingly positive" response to it.

Part of what makes this moment remarkable is that it’s not remarkable. Parvati being ace is not treated as a plot twist, but simply one of many characteristics that make up who she is. Dollarhyde mentioned comments she’s seen from queer players of The Outer Worlds who see Parvati not as pandering, but a fully developed person. That reaction was intentional.

There’s another interesting wrinkle to the conversation with Parvati, when she opens up. In most RPGs like The Outer Worlds, players are granted a wide range of responses to every situation. You can be nice, you can be an asshole, you can be indifferent. In this moment, when Parvati chooses to be vulnerable, the game explicitly limits your range of responses.

On Fanbyte, Sam Greszes explained the horrors of Sirfetch’d. He is very dense and made of duck. Fear him.

The email was innocuous enough. “Meet Sirfetch’d!” the subject line read, excitedly introducing the newest addition to the Pokemon Sword and Shield games. The internet went wild, as a neglected Generation One Pokemon was finally getting a handsome, powerful new evolution.

But folks? You don’t want to meet Sirfetch’d. You really, really don’t. Somehow, in a universe where animals wear their own parents’ skulls and ghosts carry around the desiccated faces of their own corpses, the greatest, most existential horror is a duck carrying an onion.

Thanks to Sin making fun of me for not understanding how knives work, commenter "Mara" linked to Dietrich Stout's excellent Scientific American article about why he's scanning peoples' brains while they make stone tools. MRI scans require "lying motionless inside a
two-foot-wide tube", which is apparently "not conducive to knapping". He got around it by injecting people's feet.

In our early experiments, we circumvented this problem by using a brain-imaging technique known as FDG-PET (fluorodeoxyglucose positronemission tomography). The intravenous line to supply the radioactive molecule used in PET to image brain activity needs to be injected into the foot to allow knappers to use their hands, a somewhat painful procedure. The test subject can then freely chip away at the chunk of stone destined to become an ax or knife while the tracer is taken up in metabolically active tissues in the brain. After the subject is finished, we run a scan to determine where in the brain the chemical has accumulated.

I haven't watched this NoClip documentary about how the ESRB rates video games yet, but it sounds like an interesting question to pick at.

Rogan Brown makes paper sculptures of microorganisms, they are fantastic, here they are, please look at them. 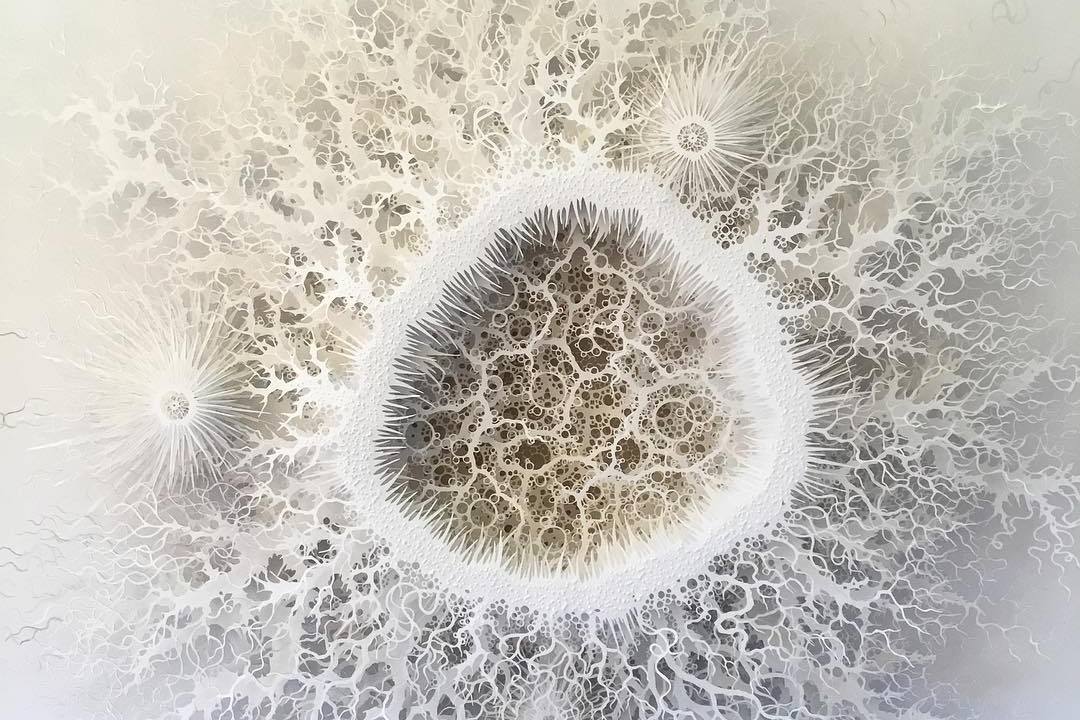 Music this week is Younger Years by The Milk Carton Kids.