The Yawhg is a game about what happens if the end of the world is coming but you don’t know that, and thus don’t care, and carry on doing whatever it was you were going to do anyway. Would it help? Would it matter? Would you survive?

It's a PC game but plays like a board game, almost. There are four characters who take it in turns to do different things around the town (six weeks before the apocalypse = six turns per character), and you have to pick at least two. You can play alone, but fun with a friend is fun doubled, so I played The Yawhg with Colm Ahern from VideoGamer. 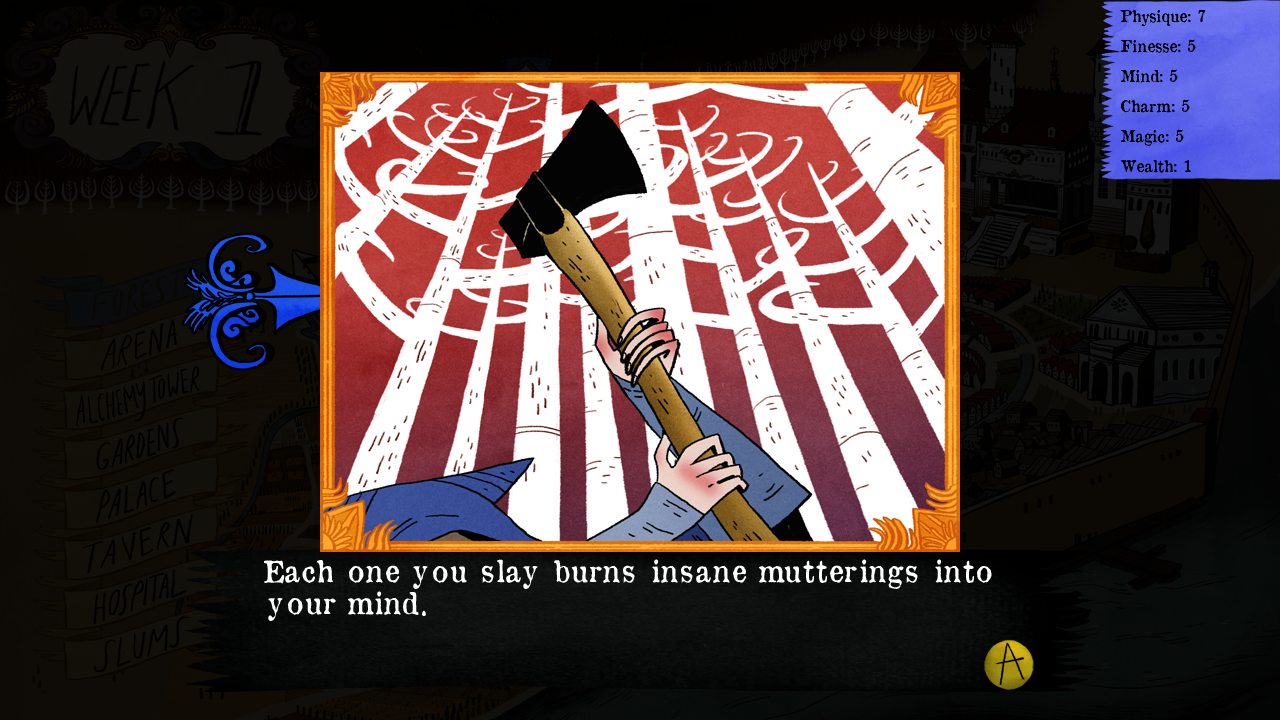 My character, a lady in blue with one of those pointy medieval hats, started in the forest. Julie Andrews learned me long ago that starting at the very beginning is optimal, so I spent my first last week chopping wood, giving me an early boost to my physical strength. One night, though, I saw a group of cloaked figures. They heard me, and advanced in a menacing manner. Given the option to run, or stand and fight, I chose the latter, reasoning that my new bulging, tree-destroying muscles would help. The results were unexpectedly murderous. I cut down three unarmed people with my axe, gaining yet more strength but also losing mind points in the process. It’s cool, you don’t need thinking to chop wood. 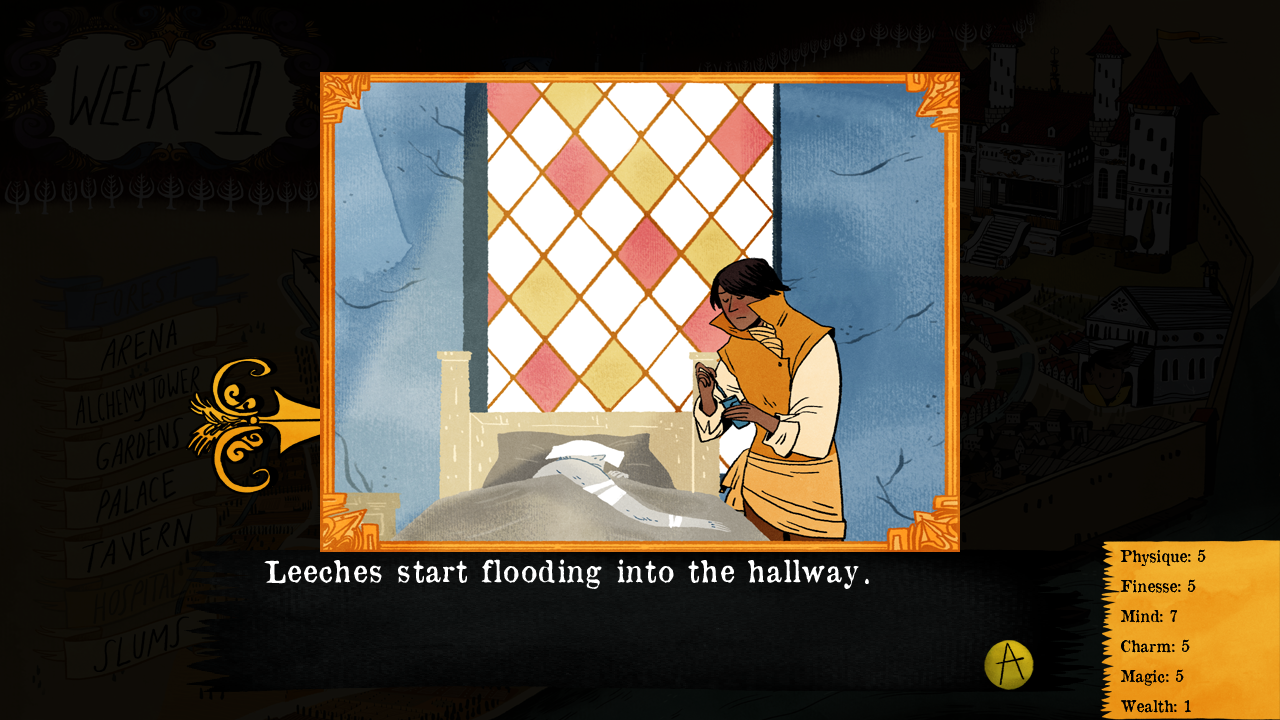 Colm chose a nice looking man in a nice yellow top, and therefore decided to be a nice person. He went to the hospital to tend to patients (his character had an appropriately smug look on his face, if I may say so). Some leeches escaped while he was there, and in trying to sacrifice himself to lure them away from the innocent, somehow made them escape even more, out of the hospital and into the city. Oh no! 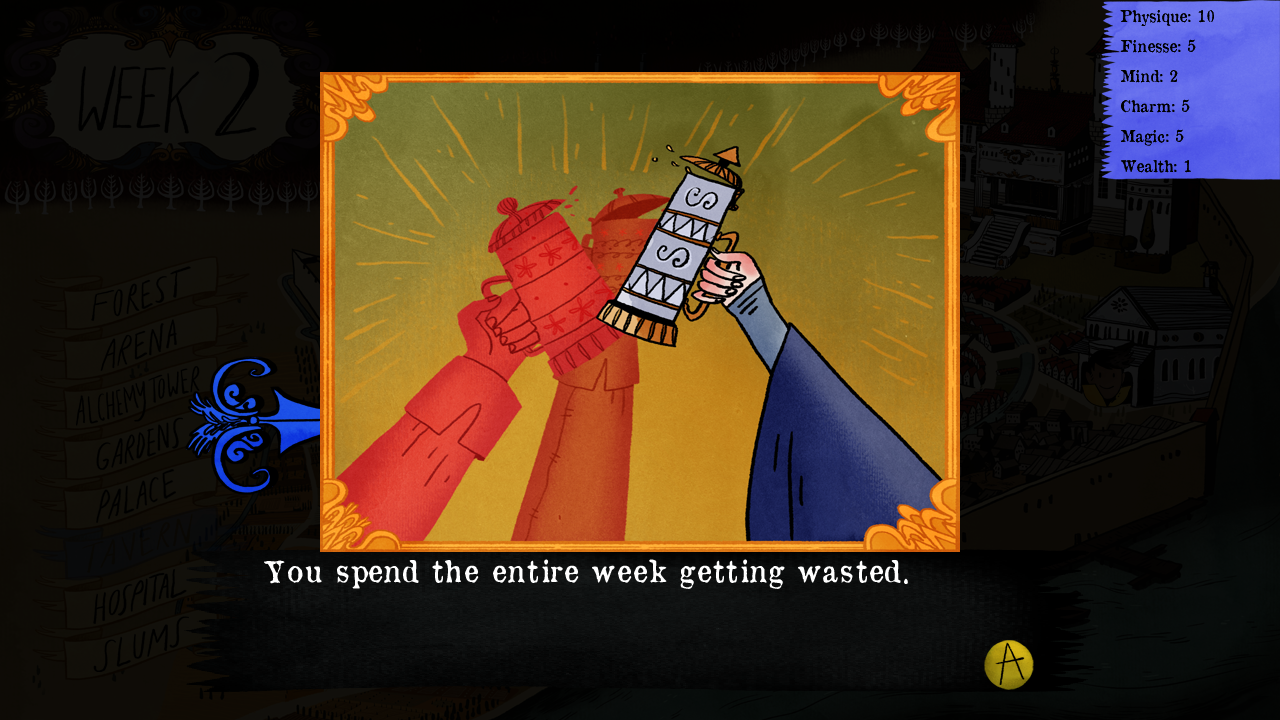 Killing three people takes its toll on a woman, so I went to the pub. I was very bad at darts, and the locals made up a mean song about me. It was a pretty uneventful week, especially compared to the previous one, but it seemed obvious to me that my character was kind of a low down and dirty rake, in contrast to Colm’s extremely nice hospital volunteer. As if to confirm this, Colm went to meditate in the gardens, like a loser. While he was there, an old man was suddenly swarmed and eaten by leeches, which was pretty funny. 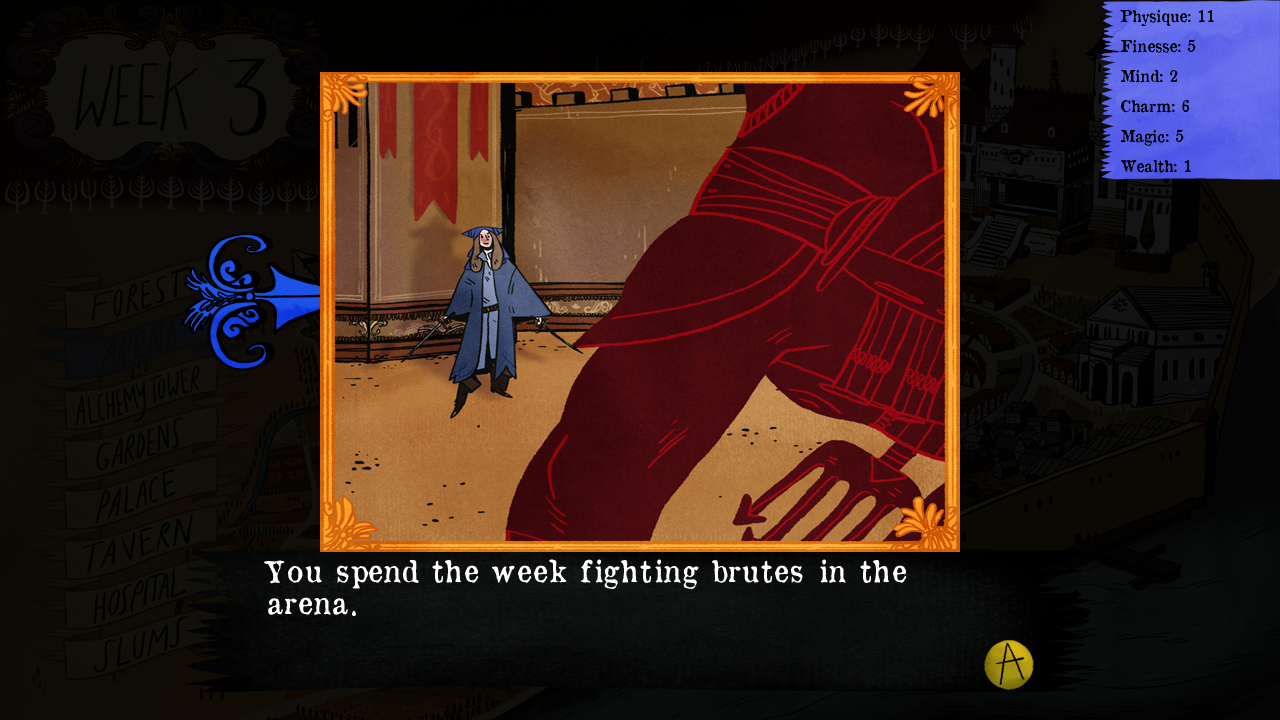 Drunk on confidence and also on beer, I stumbled into the fighting pits and axed my way through all comers, becoming even more strong. I noticed another player using a banned strength tonic and she begged me not report her to the authorities. I didn’t, but only on the condition that she cut me in on some of those sweet, sweet illegal ‘roids, because I ain’t no narc but I’m also only out for number one. I was now cartoonishly swole, but still a thin lil’ lady. TV writers take note: making a strong female character is easy! 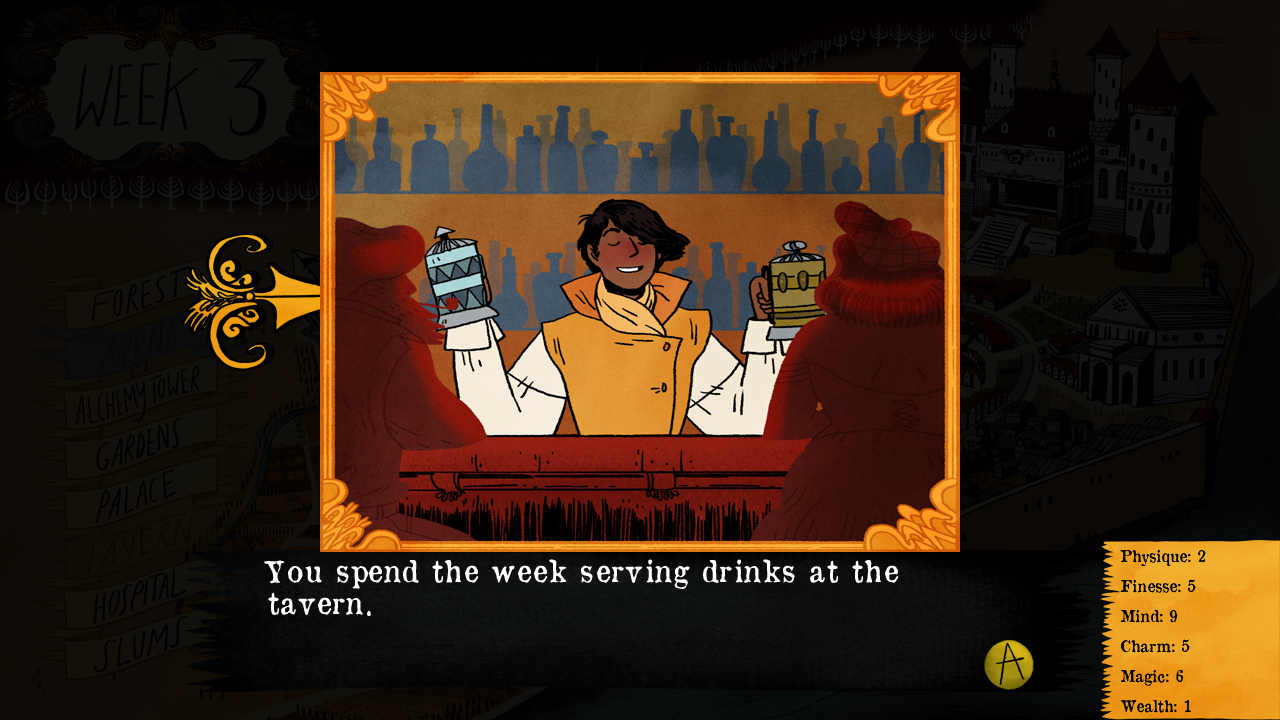 In a bid to undo my poor carousing and terrible darts play, Colm went to the pub to work behind the bar, with the same beatific expression he’d had whilst tending to the sick. I don’t exactly rate them the same, morally speaking, but I guess that’s just the kind of person he is. In any case, he was able to earn some money and things were going well until you guessed it leech attack! 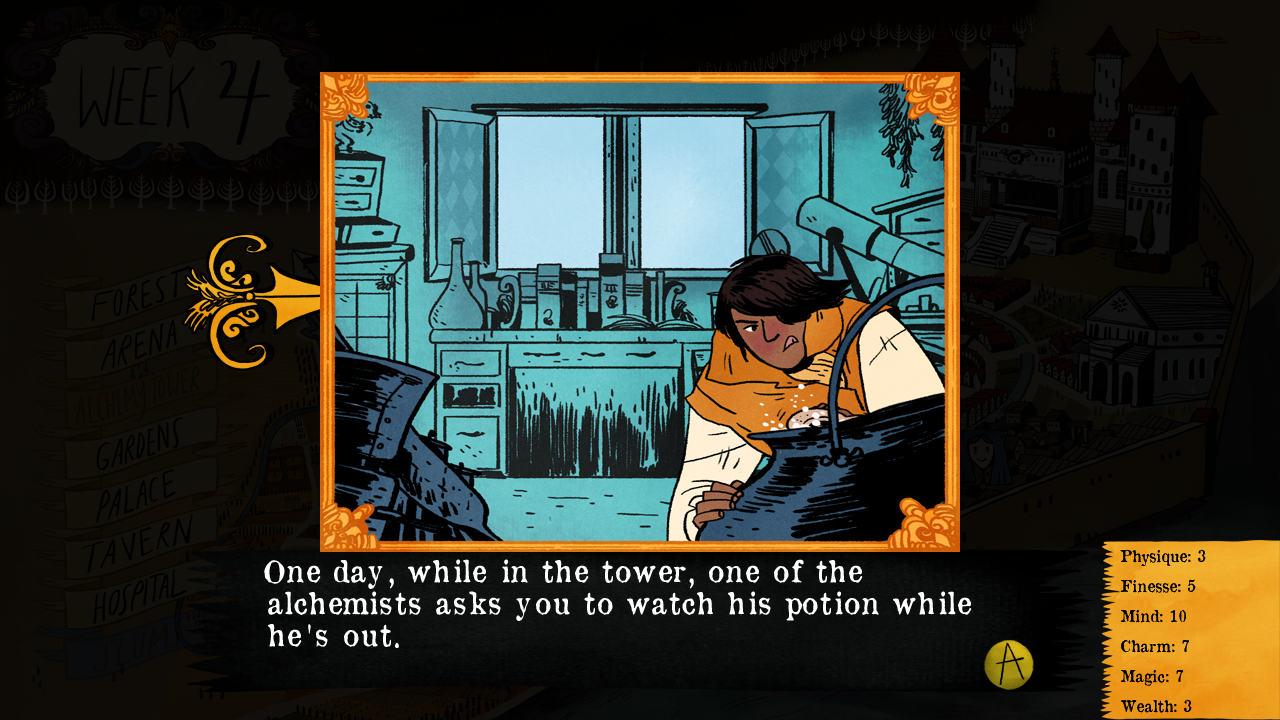 Colm’s attempts to be a productive citizen while being continually hoisted by his own leech was very cheering to me. This combined with my having faced zero consequences for all the murder and murder and whatever I did while I was wasted for an entire week, meant I had learned that crime definitely does pay. So I went pickpocketing in the slums. Who robs from the rich to feed the poor when you can rob from the poor to feed yourself? Colm did more do-goodery by cleaning at the alchemy tower. A potion bubbled over and he drank it to save innocents, shooting fire from his mouth and injuring himself in the process. The upshot at this point was that because of all the lessons he was learning from making loads of humourous slapstick mistakes (like the bumbling central character of a 70s sitcom), he was becoming pretty smart (unlike the bumbling central character of a 70s sitcom). 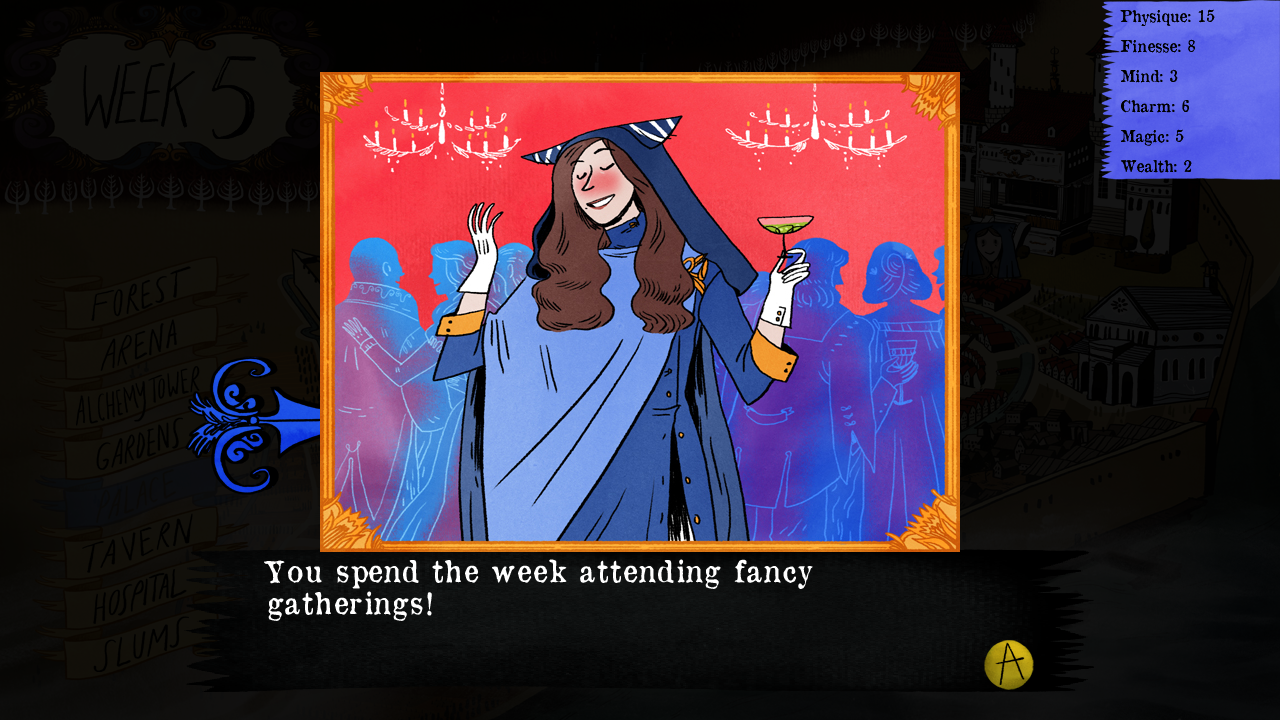 I was still riding high, so I went to a fancy week-long party at the palace (presumably by lifting up an entire outer wall with my inhuman strength, because at this point I was so stupid that I didn’t understand a joke that the court jester told). Colm was getting scared of leeches and his own clumsiness, so he fled to the forest because the forest was probably low on innocent people to be killed or eaten -- especially as I had already murdered a bunch of them. Colm went hunting, which was uneventful for a week, until there was a leech attack. 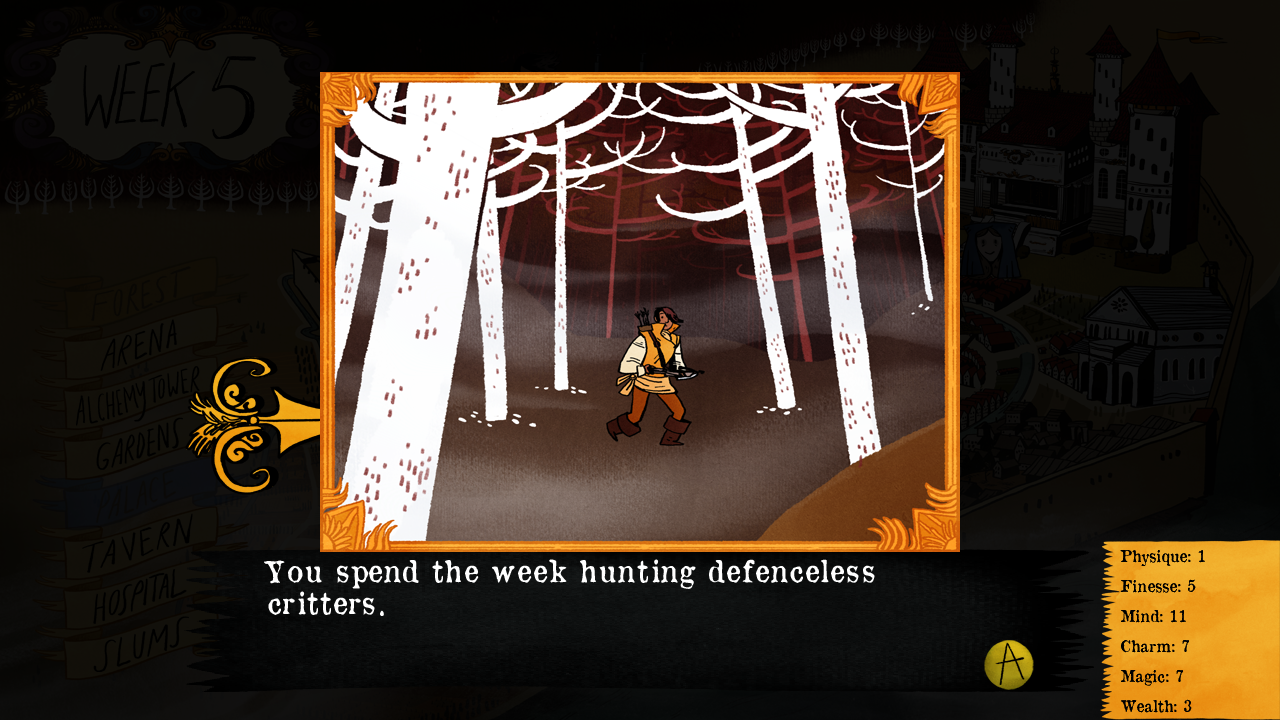 Haha, just kidding, he actually got attacked by definitely not a werewolf. He said “Ah, no!” a lot, and was, I think, getting quite frustrated. After all, we had only a week left before the end of the world. Although we didn’t know that. Player knowledge vs. character knowledge. Sh! 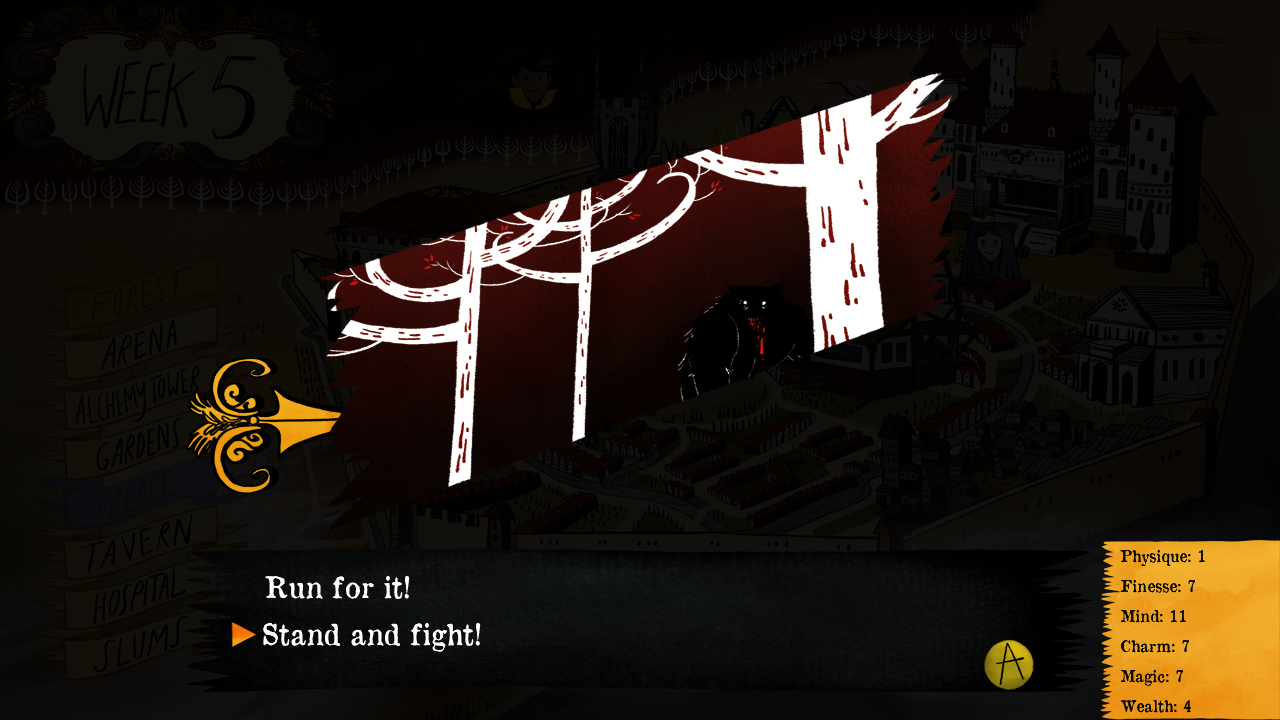 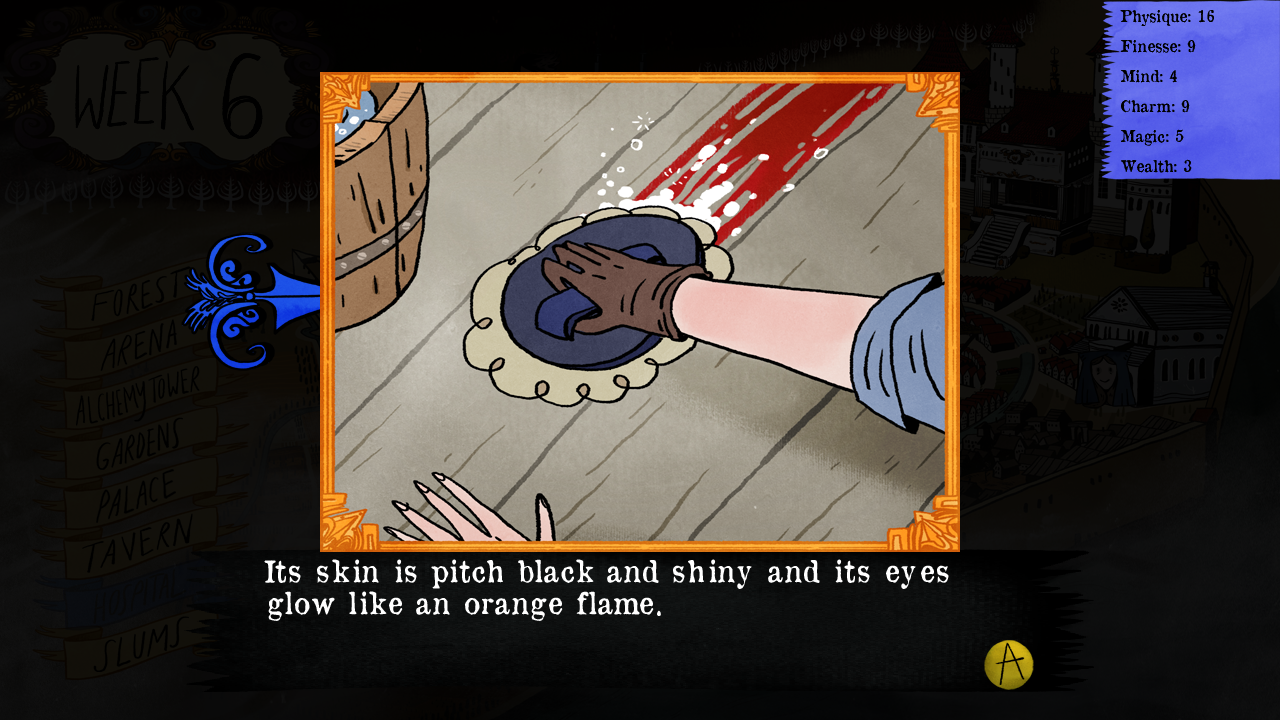 I went to the hospital this time, because I thought maybe I could half-inch some more potions and become the Hulk, or whatever legally distinct version of the Hulk I could get away with. In the event, I witnessed a woman giving birth to a demon baby. It flew towards a window. Quick! How should I stop it? Why, by just standing in front of the window like a wall in the form of an extremely pale and haunted looking woman. The hellspawn thwacked into my sinewy, muscled, sexy Twiglet of a body like it was hitting an iron bar covered in wafer thin ham. Then the doctor slit its throat. 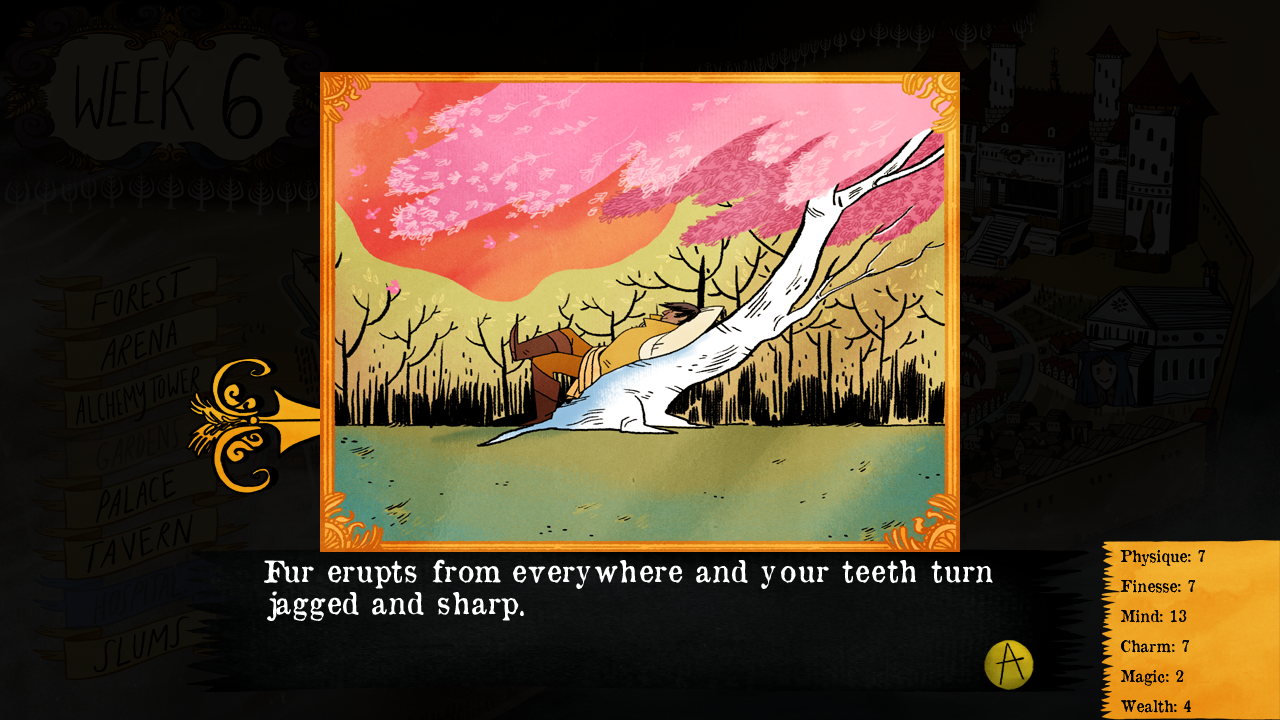 Colm took himself back to the park to try and meditate the werewolf out of his system. It actually seemed to work, because he transformed only the once and never again.

In hindsight the population should probably have paid more attention to end-days stuff like forest cults and leech plagues and werewolves and demon babies, but who are we to judge? 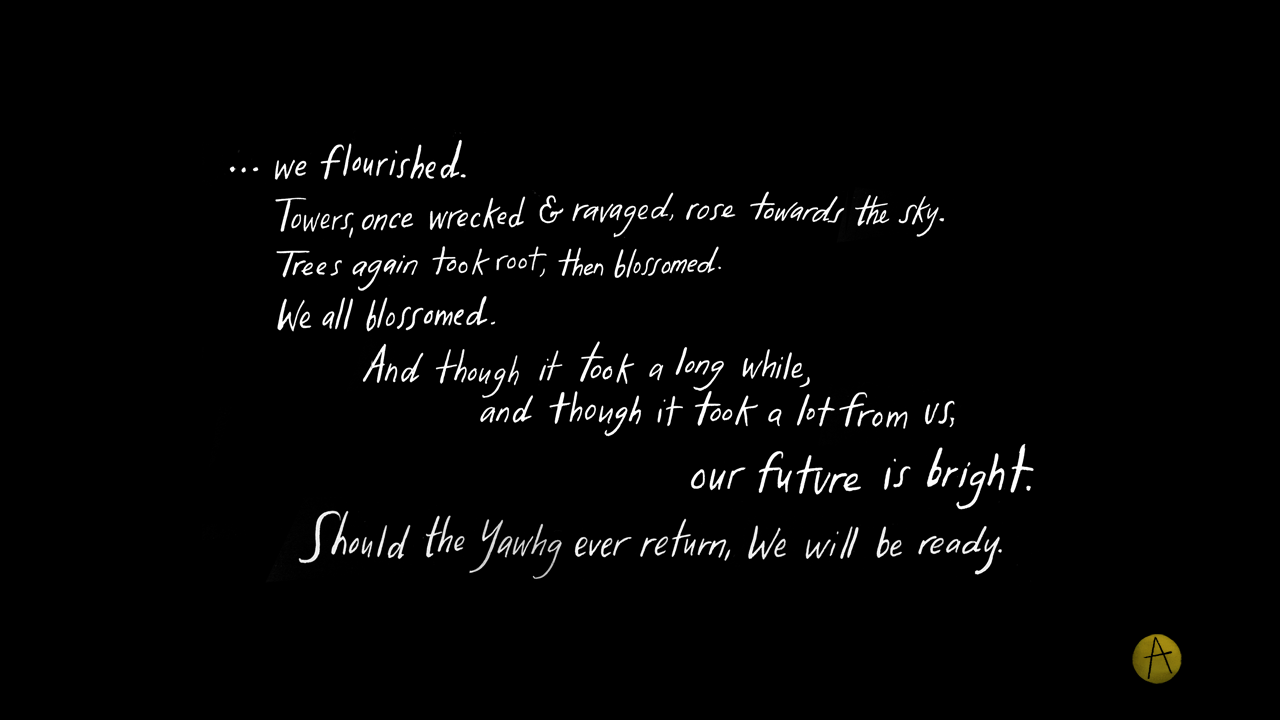 Whew! Got pretty hairy for a while there, but we survived! Now we had to decide what roles we were fit for, post Yawhgening. Because of my freakish strength I successfully lead the building effort; Colm, with his accidental intelligence, became the doctor. And we managed to rebuild! 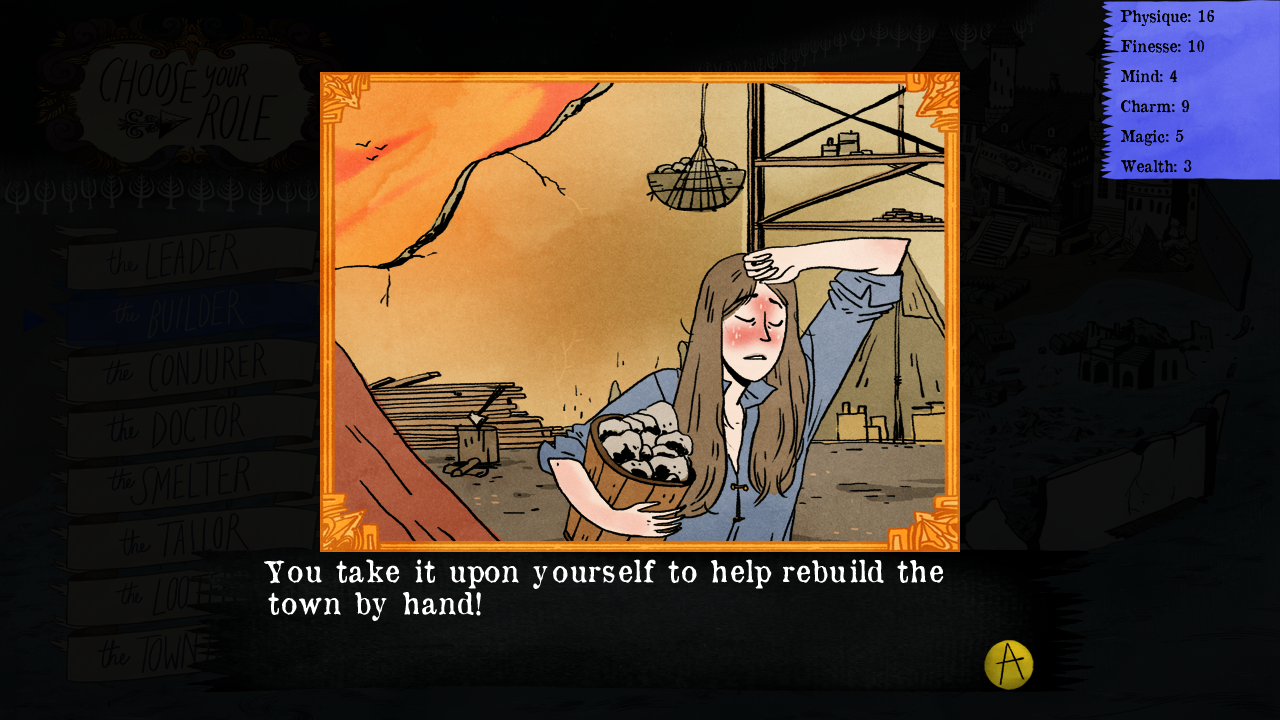 I used the Yawhg to start again. I had learned the error of my ways, and got a taste for a honest day’s hard work from my construction efforts. So I moved back to where it all began: the forest. 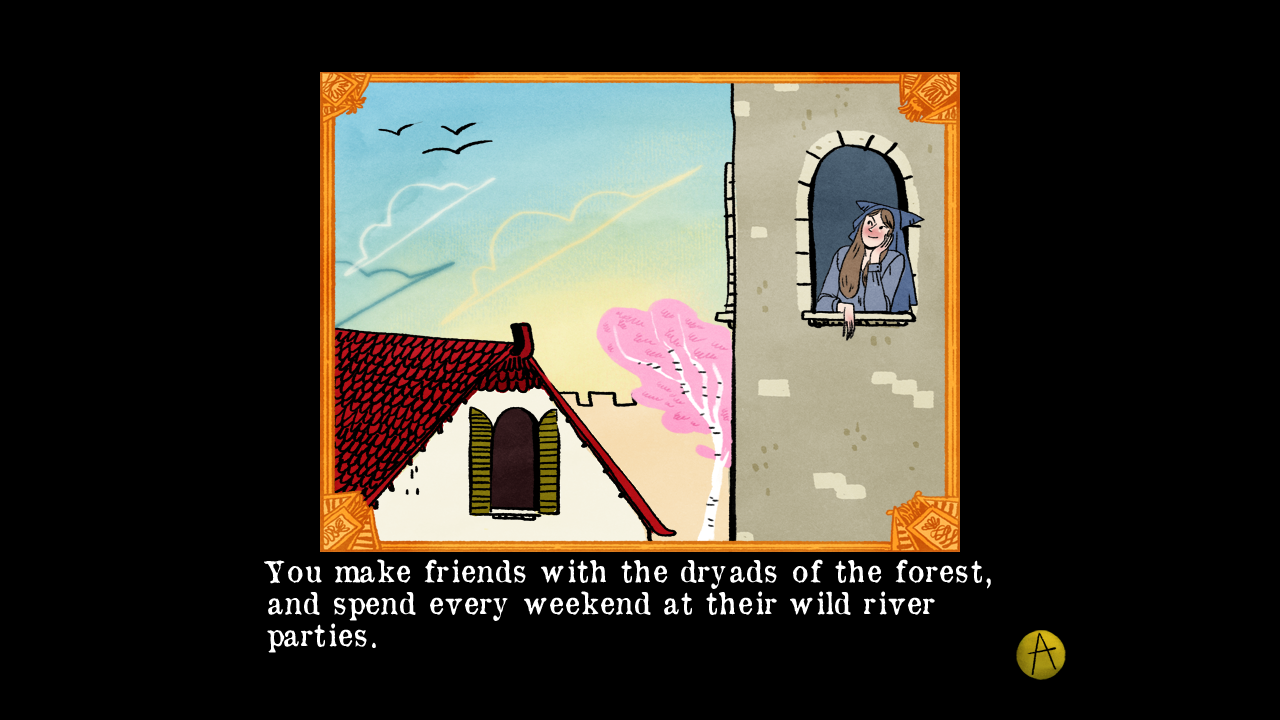 There, I chose to be among the ghosts of my past, and lived a simple life as the town’s lumberjack. Though I still went raving with the locals. What, you didn't expect Alice had changed that much, did you? *wink to camera* 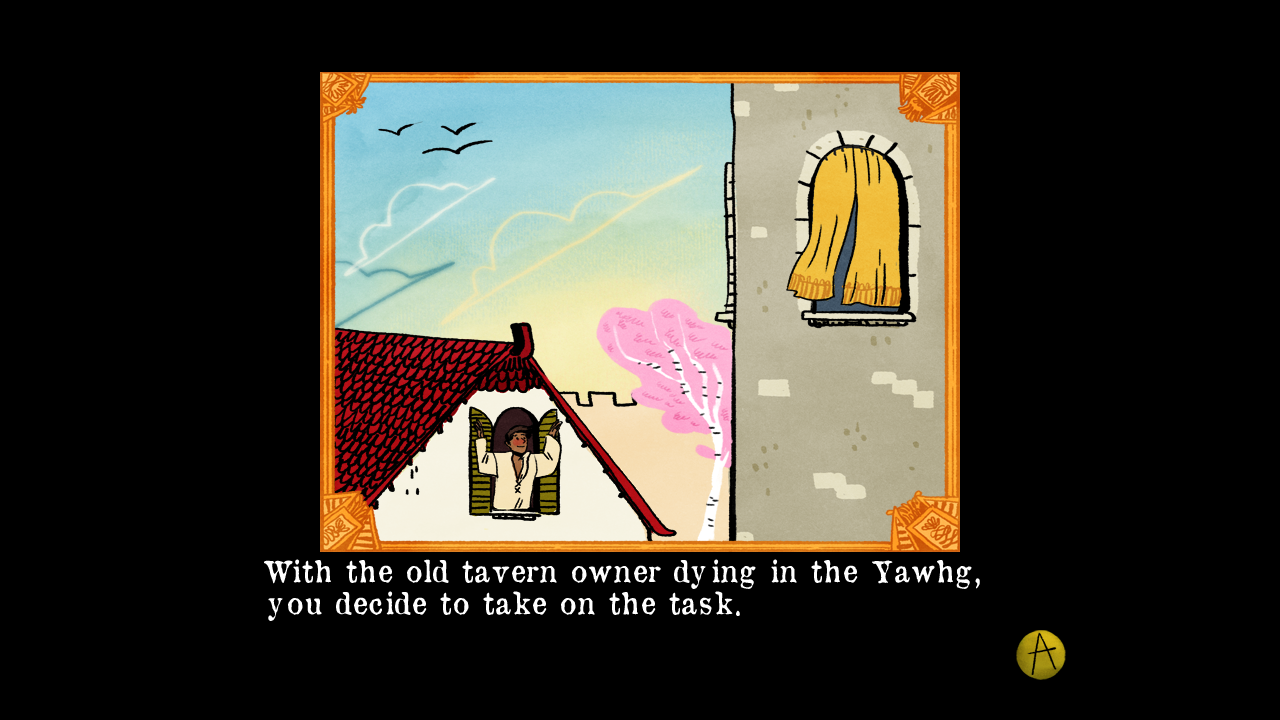 Colm discovered that bartending suited him, and despite his good intentions, well… 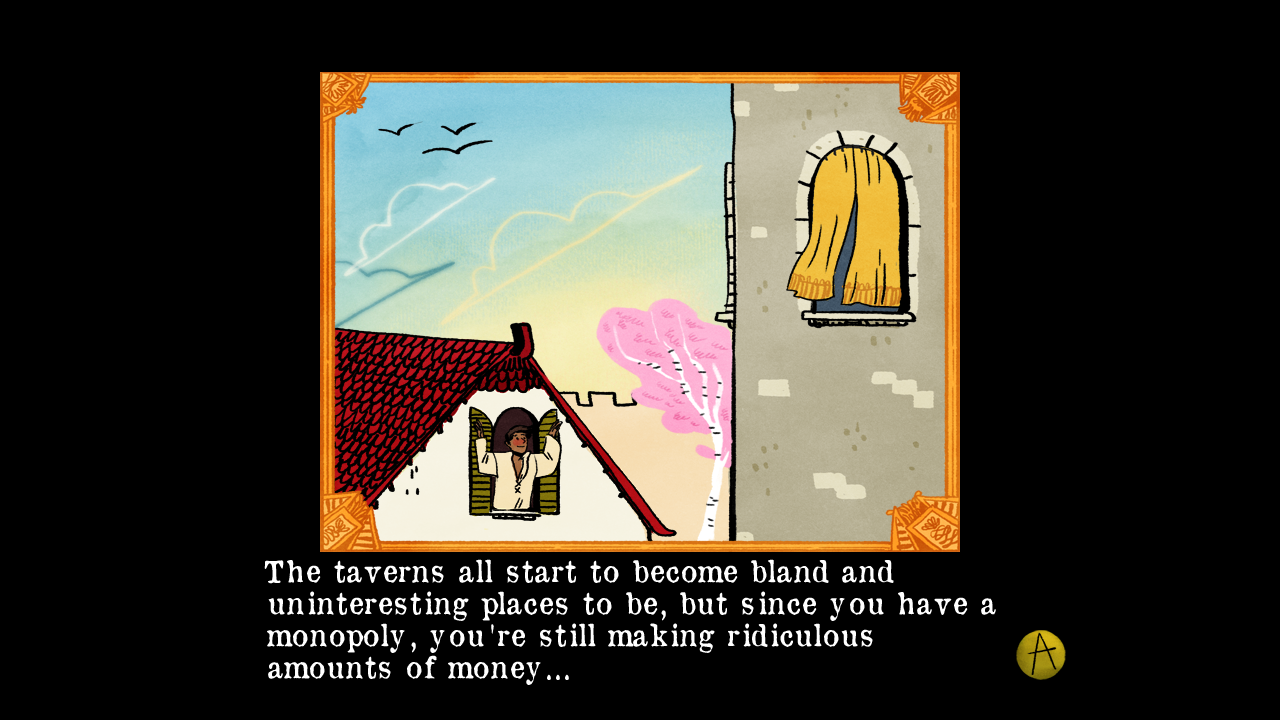 We played the game a couple more times to get a feel for how unique the story can be each time, and while we did get some repeated events, the outcomes were quite different. In our second game, for example, Colm was well placed to become the leader of the new town, but was turned into a vampire and ruled the pitiful survivors with a bloody fist. I, despite trying to be a nice person this time, became a drug dealer in the smoking ruins of the city. The experience hasn’t pushed me to prep for an apocalypse myself, though, because if The Yawhg has taught me anything it’s that it probably doesn’t matter how hard you try. 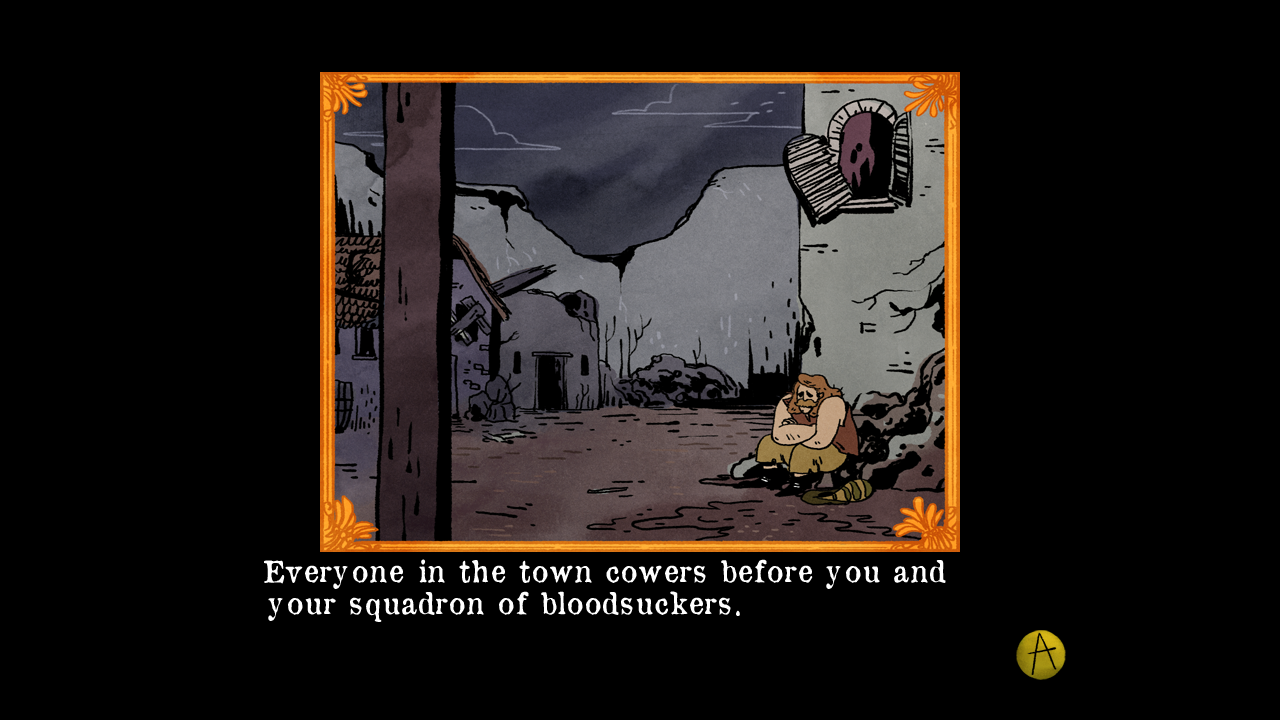