You're in for an "I can't think of an intro" intro, viewers, because the last fortnight has kept me busy with the second most important thing I've ever done in my life. I don't know about you, but while the world seems to be on a downward slide, things have been looking pretty great for me lately. When the bombs fall I shall surely rule the Wasteland, and have my minions rebuild, that we may finally get through our game backlogs.

The most important thing, of course, was to play another pile of new Steam releases, and tell you which ones are the best. It is time for more Unknown Pleasures

I have no idea what the hell is going on but I love it. The bewildering name UNDER NIGHT IN-BIRTH Exe:Late[st] is a fair omen for how the plot works. This 1-vs-1 arcade fighter is loud, fast, colourful, and impossibly stylish. It's also very easy to dive right into, and if anything is too easy, as you can get started right away and get pretty far with a combination of button mashing and learning some basic combinations on the fly.

Nobody has ever released a beat 'em up ever, so this was a pleasant surprise. The character designs pull off the unusual trick of being super sexy anime weirdness without being tacky or insulting us all, and fighters are well differentiated in their playstyles. Combinations are flexible and powerful and special moves are spectacular, but even single attacks have their place. There are a couple of things going on under the hood with counters and charging up meters, but while figuring these out may pay dividends, it's not necessary to enjoying or winning a fight.

Artsy platformer! It's been a while since one of these grabbed me. You're a woman who runs about her village, climbing and wall-jumping and sliding until she reaches a magical barrier. Told entirely through body language and background scenery and music, The King's Bird is about how she acquires some apparently forbidden power to glide beautifully through the skies, sliding along ceilings and dashing up walls to navigate through deadly spikes and pitfalls and all the usual platformer business.

It's fast and fluid and becomes difficult surprisingly early, but it's not obnoxious about it, and the controls are excellently honed. The thrill of speeding into a jump is paired with a tricky but very rewarding flight model that practically demands use of the words "swoop" and "soar". It's exceedingly pretty too, with lovely warm oranges and lush greens backing the sheer black used for platforms and people.

I can't quite believe I'm including this here, it's so... ridiculous. It's a sort of choose your own adventure visual novel, in which every decision - absolutely every decision - doesn't so much 'affect the outcome' as turn the story into something completely different. You're walking down the street one night when you bump into your favourite pop idol (side note: what IS it with visual novels and protagonists who make a habit of shoulder charging young women? Can you not just break the ice by complimenting their hair or something instead of clotheslining them? Lord). Your choice of four reactions is just the start of a night that could have you marrying her, being pantsed on live tv, or being eaten by her choreographer.

It's very silly. It's a distillation of one of the key parts of good interactive fiction, and to an extent games in general - here are your options, here's what you went for. Now let's have a look at what you could've won. There's no mucking about at all, and that's worth sacrificing some depth.

The art matches the bright and cheerful tone, and the very slight movement of characters and camera panning makes a surprisingly big difference to how alive the game seems compared to the usual totally motionless VN approach.

A lightweight submarine sim, so much so that even I felt like a little more nerdery would help, as I felt incapable of missing and made a habit of gloating over my immobilised targets by surfacing to line up a second shot.

But y'know, sometimes I want a submarine sim that's like this. The fun of blasting and diving and waiting for the torpedo to hit, without the hours of faffing about and memorising ranges and times. And not being a goddamn nazi. You play as the USA, hunting Japanese shipping in the Pacific during the half of World War 2 where they actually did something*, in a fairly free-roaming sense. Pick a spot on the map and time will zip by while you navigate there until an enemy is spotted. You can engage or retreat pretty much as you like, giving a leisurely feel compared to the usual slow and dull and then suddenly extremely tense affair you might expect.

The absence of detection systems is a bit weird though. One of the most fun aspects of the obvious touchstone that is the Silent Hunter series was listening out for the thrum of nearby engines from below, and cutting out your own engines in the hope of escaping notice. Maybe that would pull it out of its niche though. I'm not sure.

*I mean, besides preventing Britain from running out of weapons and starving to death, but shhhhh. It's more fun this way.

Iiiiiiit's yet another genre that is objectively bad and wrong and no. NO. Escape the Onochronom is a turn based MOBA, which happens to solve one of the core things a lot of people dislike about them. IT'S ALSO A BLOODY ROGUELOOBLY but fine, fine. I'll stop. It's a novel spin on the formula, and arguably more pure from a strategic standpoint as the often clunky controls and demanding clickery of the DOTA-likes are gone, leaving you free to contemplate your actions and plan ahead more precisely.

It's pretty easy to get into on a basic level - each 'turn' is a single step in which you move in a cardinal direction or stay put while everyone else does, and moving into an enemy hits them (and they you). A handful of special powers or items bought from the shop can be activated 'between' turns, with the general goal being to push back the constant stream of enemy mooks from three 'lanes', then mash up hostile towers so your own mooks can reach the exit, freeing you and completing the level. But first you'll want to beat up the wandering monsters and explore a bit to gather resources and upgrade your gear, all the while protecting your base. There are only two playable characters so far (and I've yet to unlock the second. Indeed, I'm not sure how), with more on the way later in development. I'm hoping it won't have too many, but some more are definitely needed.

It's very tricky. So far I've only succeeded once, and even that due to what I'm pretty sure was a bug. It's not clear what exactly I'm doing wrong, nor what I should be doing, nor what I actually CAN do. The key might be the deckbuilding aspect that you can set up before a match - it seems that cards from your deck draw randomly every x turns, granting temporary bonuses. But I didn't really notice much difference, aaaand guess what? I hate deckbuilding stuff in games too! Yay!

That I'm recommending Escape the Omnochronom anyway should probably speak for itself, really.

Pick of the Week: This week was a curious one, with no absolutely outstanding games, but a high overall standard meaning that several games narrowly missed the cut. It's a cruel business, the pleasuring of unkn... wait, not that. Oh god. Anyway, it's Under Night, Over Night, Birthing-in free. 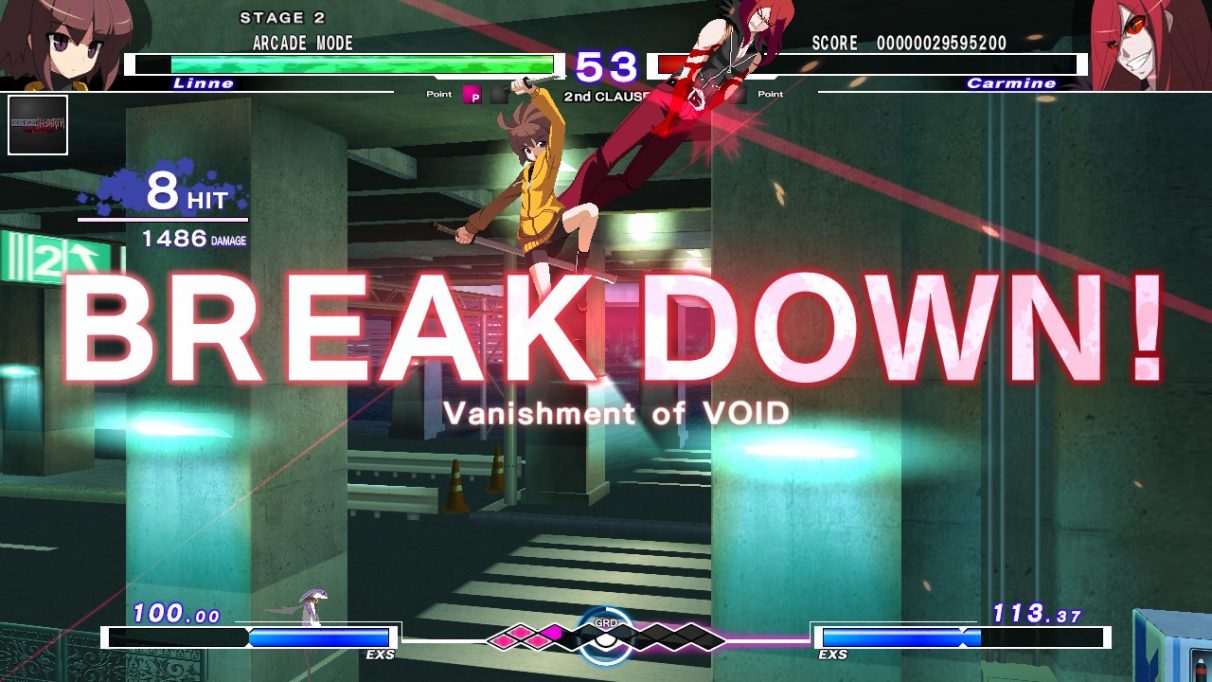 The presentation and plot are borderline impenetrable - intro screens are covered with tiny, often abstract flavour text, fights are bookended by giant flashing words like "IMMORTALIZE", presumably for reasons, and winning a round (a 'clause') is described as "Vanishment of VOID". This approach to aesthetics can look pretentious and overwhelming and plain ugly, but UNI-BE:L[st] pulls it off and in doing so, elevates an already solid fighter into a dazzling feast for the senses. And Linne is cool as hell. Even if I have no idea what she's on about.

Right, now I'm settling in for a much-needed weekend off. And we're looking after a cat too! What a world.