It's been a tiring week, viewers. Lying on the floor going "uuuugh" all weekend, instead of merely for most of it, was not enough to dispel the curse I placed on myself last Friday. I did not know I was still able to dance for that long and not die. So. I don't know about you, but I've been particularly sedate this week.

Which is lucky, because it's been another week for Unknown Pleasures, our regular round up of the best spewings from the Steam hose that not enough people are playing.

Scraping the key against the outside of the lock for the ninth time while sobbing this week: puzzling spies, pinball mountains, and pseudocatholic guilt.


Spies! Well, a spy. Agent A is a sort of escape room, except it didn't bore me to death. Possibly it's because it has a goal that isn't just "don't be playing this anymore", the fastest path to which has always struck me as obvious. You're on the trail of murderous (and super glam, I mean honestly, if I ever caught her I'd just hope we could team up and start working on my list together) spy Ruby La Rouge, and have tracked her to a flashy house full of secret spy buttons and control panels and that. 60s spy stuff, you know, tilt the brandy bottle and the mirror slides away to reveal a big tape reel, that kind of thing.

As puzzles go it's one of those light adventure game deals, so you'll pick up a handle and a gem and in another room - oh look, there's a place for the handle. Inside that cabinet is a screwdriver and a triangle for the griddy tile thing. Poke around the rest of the room and there's a key under the book, a button in the vase, and so on. It's not taxing but there's just enough of the "aha!" moments to work well, and very little hopeless clicking around thanks to the clear artwork. It tends to be obvious what can be interacted with, and the descriptions when you click on a non-interactive bit are short and mildly cute. I had a good time with this one, its setting and style carried me along comfortably. Fun stuff.

MicroTown is pretty obviously at least a bit inspired by the ancient BlueByte town builder, but where others often fail by tracing over the lines, this is doing its own thing. And it's lovely. You run a tiny settlement of industrious stick figures, who can't be directly controlled but will dutifully build whatever you ask, and work fields, chop trees, bake bread, and generally take care of that villager biz.

The interface is already in good shape - you'll be up and going in no time, and things work the way you'd expect. When there's doubt, the building descriptions make it clear what's needed, and it takes very little to get a village fed and stable. Expanding beyond that comes at your own pace. At present there's only one explicit goal of building a big ol' monument, but there's no pressure to do that, and a sandbox mode is included anyway. It's early days yet and there's not really much more than a few hours' worth of stuff to unlock and build, but honestly, what's here is already engaging, and a strong foundation for all manner of new stuff.

Some nitpicks: you can't cancel buildings in progress, and it needs something to prevent the early game-killing state wherein your lumberjack has deforested their work area but you don't have enough planks for a forester or another woodcutter. Small things.

I'm seriously considering a special roundup post this year just to showcase the sheer prettiness of some of the games that have braved the deadly contest of the Pleasuredome. Creature In The Well is striking, with on-paper lurid colours and plain, almost retro surfaces. The pitch black depths of the interiors and then the desolate, endless sands on your occasional jaunts outside. Just a fantastic look.

Happily, it's also an original and slightly weird game. You're a robot, awoken after many years, possibly centuries, with only the mountain to go to. Inside the mountain is an ancient, dormant machine, and in the depths surrounding its catwalks and precipiceses, a pair of sinister eyes with a giant bionic, bony hand. They tell you to leave, but then coldly watch as you puzzle your way deeper inside. You use electricity to open doors, and to get that you, well, you play a sort of pinball. Bumpers pop up from the ground, and must be struck with the hovering white balls you punt around with whatever sticks or pipes you find.

It's a very strange idea, and it demands perfect positioning and aim at times (made more difficult by your robot's tendency to move slightly when another ball enters its orbit). But the only punishment for messing up a shot is a momentary delay while more balls appear. It feels good to knock them around, and the hints of a story plus the mystery of the big ominous beastie are a decent hook. A solid and unusual puzzley action game.

It's been several minutes since I alienated a fanbase, so here we go: uuuuuugh "soulslikes", amirite.

A soulslike is essentially a game modelled after Dark Souls somehow. We won't get into the prescriptivist stuff, but they're almost always demanding fighters about dodging, parrying, and learning your enemies' attack timings, in which you harvest from fallen enemies and hope to survive long enough to reach the next checkpoint, at which point you get a health potion top up, enemies respawn, and you can cash in your harvested whatevers for upgrades. Typically death costs you all these resources, but you get one chance to retrieve them from the spot where you fell. Die again and they're gone.

They're... um. They're valid? People are allowed to like rubbish things. We'll give the soulslike fans a colony somewhere cold and dreary and miserable, they'll like that.

Blasphemous is both very much in the mould, and its own thing. At least, thematically. While it's as joyless and po-faced as they all are (all of them), its retro art and fast, fairly smooth movement brighten it up a little, which is fitting for a very platformy stabfest. Your character, the Iron Dunce, runs and jumps about a dystopic, violent land stricken with at least one kind of inquisitorial extremism. That aesthetic is strong, with quest-giving characters deifying suffering and pain, recalling the grisly veneration of martyrdom and crusading and borderline occultism of the frankly bizarre medieval eras of Catholicism. It's a strong look and it's worn well.

I like some of the enemy designs - the angry people carrying massive slabs of penitant stone, the classic flagellants slashing themselves up with whips when they're not after you.

I very nearly bumped this out for being multiplayer and thus super impractical for the column. It's a good job I didn't, because even in its single player mode I was cackling and exclaiming and swearing delightedly at this one. I am very popular in the office.

You're a little blobby thing with arms, and in Heave Ho you're also 2D, and must drag, climb, and swing yourself to the big U with a flag and balloon in that sits at the other end of the level. You control an arm with each thumbstick (don't, please don't use a keyboard for this, it's not 2004 anymore and that argument just embarasses us all) and grab onto surfaces by pressing either trigger. That's it.

That's all it needs. I can see that even more than the average co-op game, this would be ridiculously fun with a few friends, but it's still a good laugh alone. The feeling when you narrowly miss a jump should be frustrating but it's just too funny and you can see it coming too far in advance to get angry (it helps too that longer levels have checkpoints anyway). The motion of it is so unfamiliar that you'll often mess up simply because you let go of the wrong trigger, so the fault is totally your own. And the sounds are great. Loud, solid smacking sounds when you grab increase its slapstick power, you scream when you fall, and when I swung too far and hard and bashed my little blobbo's elbow into a wall, he grumbled wonderfully grumpy nonsense at me.

I've chosen to link a slightly older trailer because (a) it shows the single player bits and (b) it isn't just two minutes of strangers screaming and guffawing.

Pick of the week: It's MicroTown. 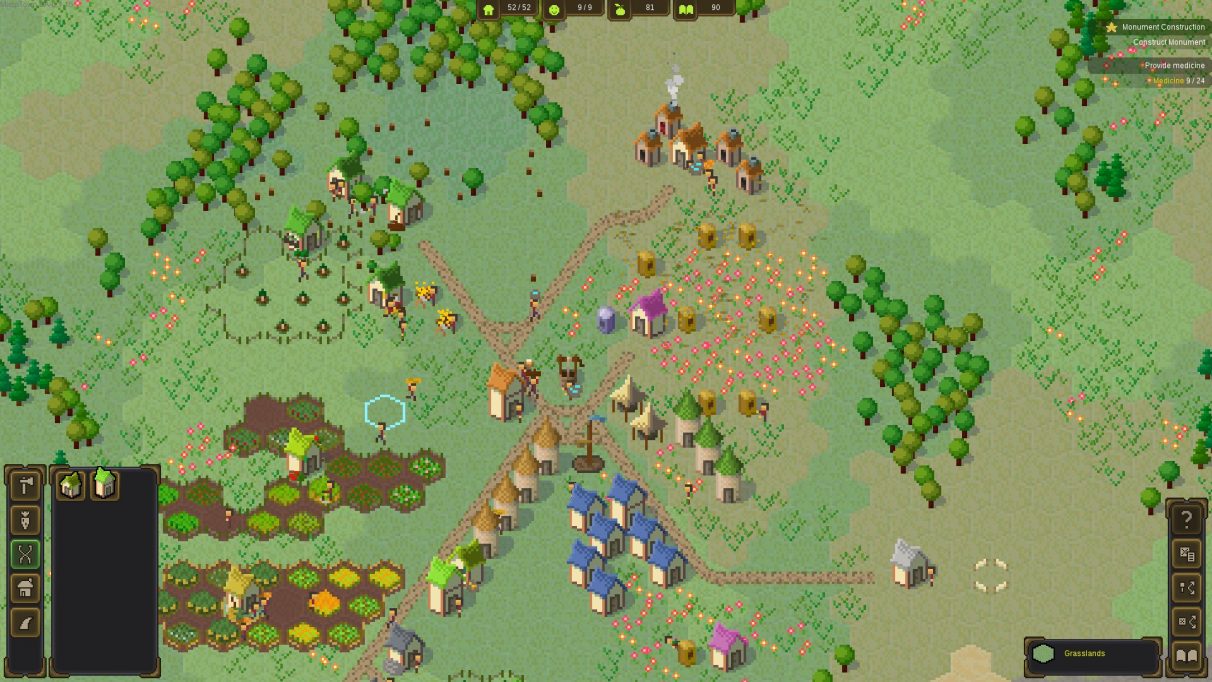 You can have bees. You grow seedlings in a garden, which go to the florist, who plants little flowers, and a little worker wanders up and puts the bees in and the little villagers scurry about carrying wood and tomatoes and herbs and coal and gently hammering away on a building site and digging up stones and I should really end this sentence.

I'm really optimistic and hope to see it expand into something with more longevity, but as it stands, I was already content to sit and watch it for a long while.