A friend from the midlands once lamented that she'd always lived there. How absurd it was to live on an island, but directly in the middle of it. I can now say, having lived in two coastal cities, that living on the edge of it is very much the same, except that there are much better chip shops and the rain is more ... oceany.

It is currently hacking it down out there and I don't want to go home in it. Join me once more then, readers, for our regular round up of the best new games on Steam that you'll never see on a billboard. It's Unknown Pleasures.

Gazing wistfully into the deep this week: algorithmic therapy, Scandinavian body horror, and the ol' rotate and thrust.

First person horror games are usually terrible, and in all the same ways. This is great news for me because I hate them anyway so it makes very little difference, but someone's only gone and made one I like. Apsulov is gruesome. Its very first scene is horrible, with you (an Alice, it turns out, which explains the latent magic powers) operated on by some robotic apparatus at the whim of an unseen, intensely threatening entity that's very quick to anger. Something's wrong with your throat, so you're all gurgly and choking and it's horrible, but for once it doesn't feel sadistic (obviously the villain is sadistic, but the game doesn't feel so. It's meant to be horrible, not pornographic).

You escape, of course, and flee a facility, dodging muttering, screaming shamblemen, pursued by your tormentor's evil beast, and piecing together where and who you are. Scientists have opened a sinister gate or screaming obsidian hellcube or some other thing that only a colossal fool would open, and apparently the Norse gods are involved somehow. Creeping, rapidly growing tentacles are poking through, gigantic valkyrie shields line one lab, and since your captor drilled something into your head, you have the power to see magical sigils. You're important somehow, but how it all ties together is a mystery. This is all excellently done, and I'm genuinely intrigued to find out more. Even the occasional jump scares didn't feel cheap, nor the pillar of the horror - that's the dread and revulsion, and secondary to that, the wider horror of what this event means for earth in general.

I'm impressed. Oh, but the bloody keypads are a joke. You have to 'use' them and then take your hand off the mouse and use the arrow keys to type the numbers in. Deus Ex let us use the number pad nineteen years ago, damn it. Come on.

This wasn't the game that sparked it, but I've had a right moan about "the 80s aesthetic" in games this week. Did you know it's possible to style your game after something that isn't synthwave and neon? It's true, I saw a game do it once.

Exception is enthralling, though, and its presentation is a large part of that. It's a simple action platformer, with a plot about emptying a woman's computer from a load of viruses that I skipped entirely thanks to built-in options that I respect mightily. You're a wee robot who dashes about obstacle courses, wall jumping, slashing up hostile robots, and generally dashing to the exit. Several times each level, you'll touch a waypoint that reorients the whole level, zooming out and rotating and setting you back along the same course but upside down or along a different axis. It's very cool and the movement flows freely and comfortably, including your attacks.

The vast majority of enemies are easily done in without altering your path, and you're periodically given new attacks and powers that I didn't bother with at all (frankly they seemed more trouble than they were worth). Occasional bosses take half a dozen hits and attack in simple enough patterns that they don't disrupt things too much either. Everything's bright and fast and spectacular, and even now, at synthwave saturation point, the soundtrack is a perfect accompaniment that drives you on when the wrong beats would undermine the action.

It's another one. It's another bloody deckbuilding roguelike. You're doing it on purpose aren't you?

Phantom Rose does things a little bit differently to the many others in its class. Typically in a deckbuilder you'll draw a handful of cards and choose which to play. Here, there's some kind of initiative system going on behind the scenes too. In each round of a fight, you and your opponent will line up cards (5 altogether, giving an advantage to one or the other of you). Yours are randomly chosen from your hand, but you can replace some or all of them from another hand drawn at the bottom of the screen. When you're satisfied, you start the turn and cards play out from left to right.

There's a big focus on status effects and buffs like Vampiric Whatever, which gives a chance of restoring health when you attack, or focus, which helps you break through defences. It may get complicated later but was easy to grasp for at least the first two floors. Your path goes along a grid from top left to top right, always (until you reach a map edge) offering two options. I didn't get the sense that these make a drastic difference in terms of risk or reward, with the exception of occasional "maid" rooms, where you fight a powerful monster to free an amine maid (fairly mild on the tacky anime bullshit meter) who'll reward you with a special item.

I like that one of the attacks lets you hit a monster with their own attack rating instead of yours. That's a fun trick. It moves at a brisk pace too, and I even appreciate the artwork. All that red and white and black makes for a bold style.

It feels a bit too easy to run out of good attacking cards. But that might come down to practicing more.

Rashlander is a modern form of one of those old 2D rotate and thrust gravity games, whose names, aside from Thrust and Gravity Power, escape me. You pilot a wee ship about a sometimes absurdly hazardous area, aiming to land it on a warp pad to move on to the next level. Gravity and inertia are important tools and potential threats, as there's a basic Newtonian physics system, making navigation tricky and rewarding. Your default ship (more are unlockable, although they're balanced so that each presents its own challenge) is fragile and lives are limited. In case that wasn't cruel enough for you, fuel is also highly limited, and when you run out you explode.

It's bloody hard. I'm a bit rubbish at it. Each warp pad also offers an upgrade, although some have a downside (one increases fuel capacity but scrambles in-game text, an inventive and somewhat maddening invention), and some are a mixed blessing as they change the way the ship handles, which means re-learning on the fly, potentially under dangerous circumstances. While it's not a cruel game, it's somewhat antagonistic, although more for comic effect than anything. Levels have hidden collectables and bonus landing pads if you fancy a challenge, but it'll likely be a while before you're good enough to risk those as a matter of course.

The cult of the algorithm is one of the biggest and most insidious disasters of our already disaster-laden era. Eliza is an exploration of this, and of the mental health crisis, and of tech startup 'culture', and of counselling. It's a visual novel in which you play as Evelyn, a new recruit for the eponymous business, which is a counselling service in which all the counselling is done by an AI. The humans like Evelyn are just there to put a face on it, to the extent that they're not allowed to say anything but whatever script the algorithms produce, based on a vast bank of heuristic data and the patient's verbal analysis, biological data like heart rate, perspiration and so on. They can't even interpret.

I did a bit of basic counselling training a long time ago. It's something I've long been interested in, and have experienced and contemplated from many angles. I was all set to loathe Eliza simply for suggesting the idea, fearing the HIGNFY effect, that some absolute piece will get wind of it and not realise what a godawful idea this is.

Within the very first session I was haughtily telling the system off for being an atrocious counsellor - outright lying to a patient, for one - but then the next chapter (they're comfortably short) kicked in. Evelyn meets with an old, estranged friend for lunch, and their shared past is hinted at. She goes to a conference in which a key speaker is a former colleague, who announces that he wants to go further than Eliza, and roll out technology that will directly interface with a patient's brain. It's a hybrid of electroconvulsive therapy, VR therapy, and everything else Eliza already does. He also openly criticises the incredible and shameful ignorance the tech people have of psychological research that isn't jazzed up with some faddy nerd bullshit (I paraphrased). And I'm hooked.

Much as I see the obvious downsides of this system (and not even addressing the issue of putting this in the hands of a private business, let alone a heap of silicon valley jebs)... is it actually worse than what we have now? If not this, then what are we gonna do, magically summon the hundred thousand competent and willing and experienced counsellors and doctors and therapists we need to deal with the absolutely appalling state of mental health treatment in, let's face it, most countries?

Eliza is obviously the pick of the week. 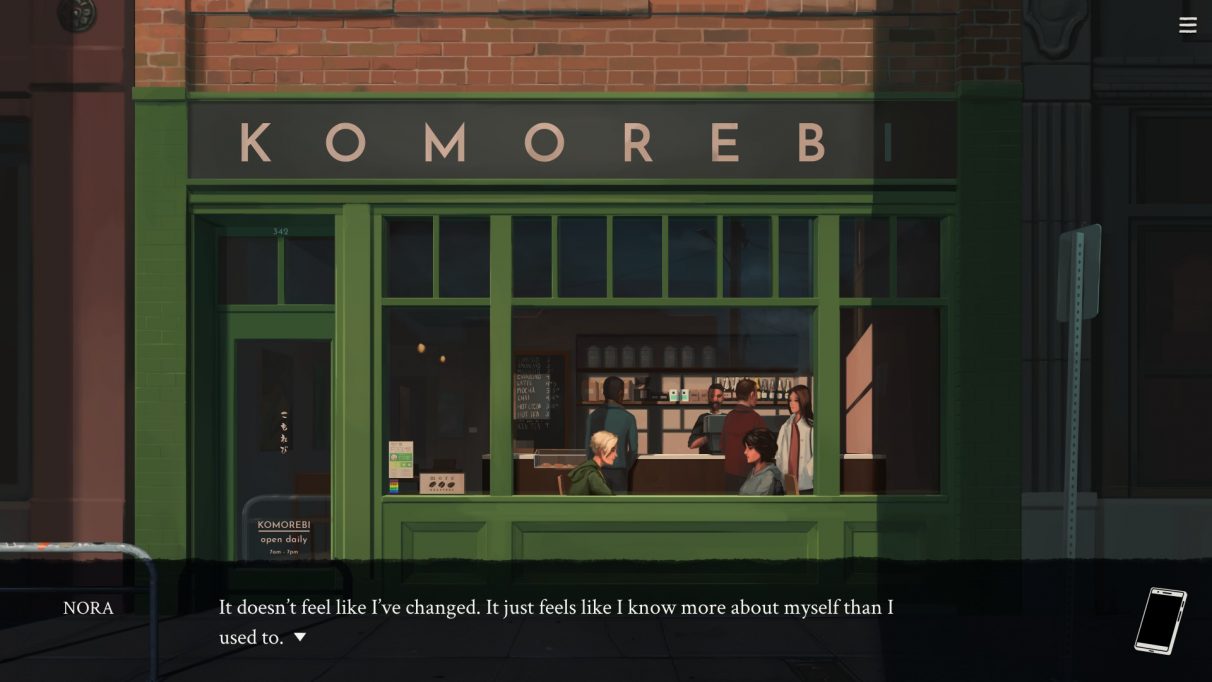 I tangent. Eliza touched on all of the issues in under an hour. The personal story of Evelyn, the problems she had in her hold job, her own mental health, the troubles faced by her patients, their concerns with the system, its sinister dystopian possibilities, and, despite my distaste, its potential benefits. That's not just a good idea, that's a good idea someone really cares about and understands, and has the talent to write.