When I was in my late twenties, I went back to visit the house I’d grown up in. It felt strange, walking into rooms filled with memories, where everything felt smaller, older. It wasn’t a bad house, but my view of it was compromised by all the other places I’d lived since. It was also the house where, on Christmas Eve 2005, I came home with a copy of World of Warcraft, an exciting new game based on the lore of a strategy game I already loved. I took one step into Azeroth and began a journey that still hasn’t ended.

In 2017 Blizzard announced World of Warcraft: Classic, a way to play WoW near-as-dammit as it was when it first came out. There’ve been opportunities to experience it like that before, of course, if you were willing to dip your toe into the waters of the private server community. Blizzard have made no secret of how they feel about unauthorised versions of the game, but the time has finally arrived for an official one. The BlizzCon demo this week presented us with a playable leap back through time.

Installing the thing says a lot. It tells you it’s copying files, rather than downloading them, but the file size is a fraction of WoW’s current total. WoW has always run on a strange hybrid of new and old cod. Though Classic is much larger than its launch edition, it’s had some quality of life stuff bundled in this time. Most noticeable is the ability to boost the graphics past what was achievable over a decade ago, as well as the current version's secondary settings for when you’re in a raid or battleground instance.

Sure, if you’re running it on an older computer, or one with less graphical capability, it’s probably going to look about the same as you remember it, save for the resolution. But bump it up to the top setting and the game fills out the terrain with wavy grass, nicer skyboxes and better lighting. Suddenly, WoW Classic is glowing, and it’s not just due to all the nostalgia. 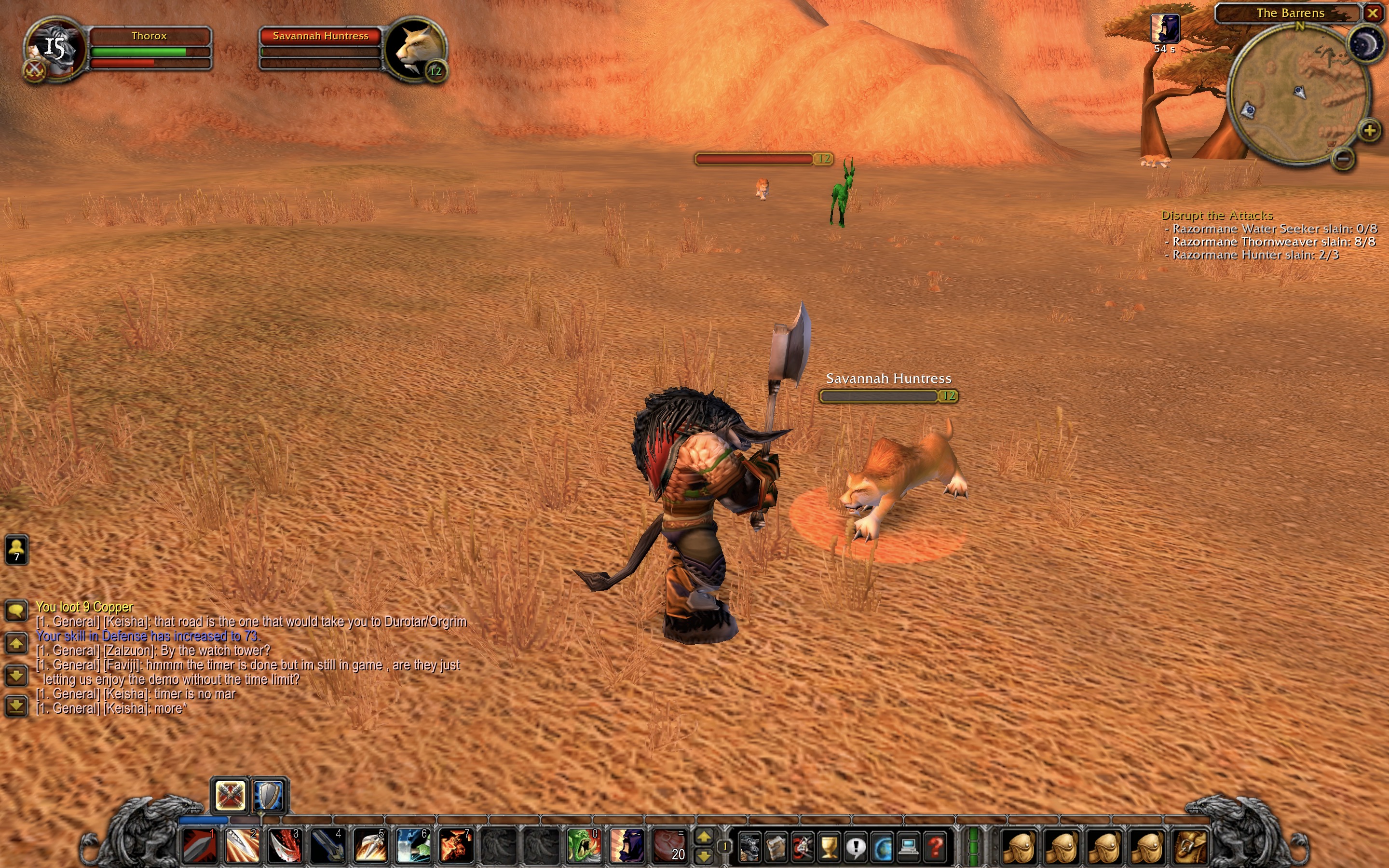 After logging in and rapidly recreating my first ever character (Thorox, the Tauren Arms Warrior -- easy, given there’s far less choice in Classic), I found myself in one of the most iconic locations in the game’s history: The Crossroads, a hub of Horde tents and a postbox in the middle of the dead, dry plains of the Barrens. This major questing hub was also the central meeting point for the infamous Denizens of Barrens Chat, the text chatroom solely for people playing in that area of the map. When I logged into Classic, people were standing around chatting about Chuck Norris. In 2018.

Of course, getting back on the horse of vanilla mechanics is a rough ride if you’re used to the huge effort Blizzard have since put into the game’s user experience. In 2018 we have dungeon matchmaking, easy quest tracking, and the equivalent of an entire Pokémon MMO stuffed in as an extra feature. WoW Classic has none of this -- and is the hardest version of the game there has ever been.

Weapon skill proficiency, slower health regeneration, quest text that writes itself onto the page in real time... The MMORPG of yesteryear is a game steeped in the genre traditions of the era. A time when people were more patient, and when maintaining a high fantasy aesthetic was more important than user convenience. It was a huge pain in the backside remembering that I had to visually locate every quest NPC again now, but there’s something about being forced to read “north” in quest text, and head north to find your location more organically, that makes Classic feel more like an adventure and less like an interactive checklist.

That being said, questing is definitely slower in general. Drop rates of loot from dead enemies are back to their lowest. “Kill birds,” they said. “Take their beaks,” they said. They didn’t say most birds don’t have intact beaks by the time you’re finished with them. This is as grindy as currently-available MMORPG experiences are going to get, and if you’re coming in fresh I’d definitely recommend a podcast, or some music -- exactly how I played it in the mid-2000s. 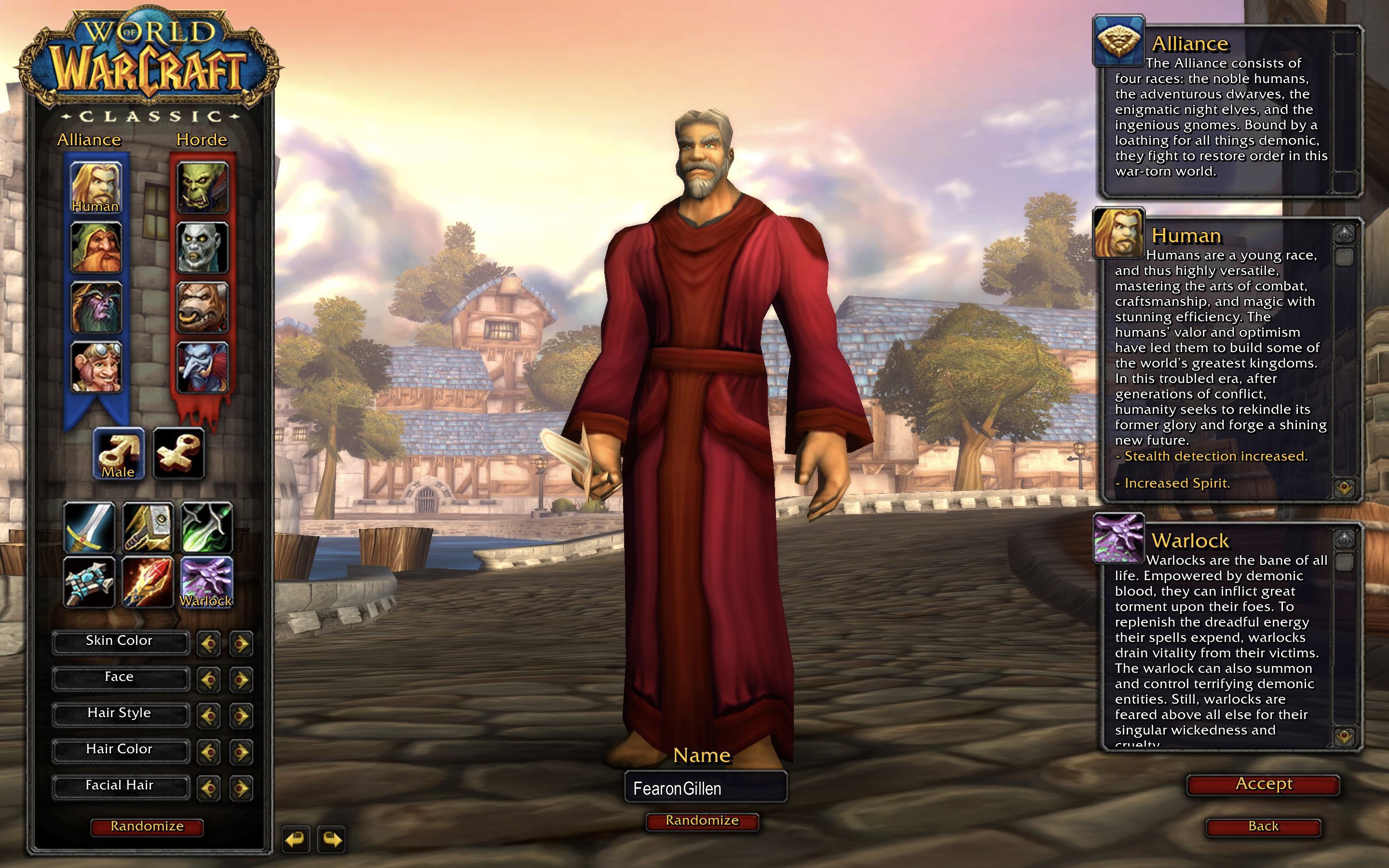 One thing I really am happy to have back is the old skill tree system. I enjoy the new one -- fluid; more spec-focused -- but it can sometimes feel a little siloed, like there’s no true way to be a hybrid build. Not so in Classic. There you can be a Protection Warrior and splash into Fury for a little more rage, or even use some Prot skill points to make yourself hardier in Arms. It’s similar for other classes, too, and it’s nice to be able to pick how far into a certain skill you’d like to go. It’s less binary, and feels closer to Dungeons & Dragons than it does the World of Warcraft of 2018. More complex, definitely, but more rewarding for those who enjoy min-maxing their characters.

For me it was like scanning my teenage bedroom to see if my stuff was still in the same place. And it is! I know where the Quillboar hang out, and why I need to kill a load of them, and I could probably draw you a map of Wailing Caverns from memory. Even if you’re not as familiar as I am, there’s enjoyment to be had from carefully going over quest details, stocking up on equipment, and heading out not knowing how long it’ll take or if you’ll be successful. There are no flying mounts -- no mounts at all, for a good while, and definitely not in the demo’s level range. Just you, the open road, and a load of odd-looking mountains.

Back in the day, though, when I wasn’t messing around with mountains or finishing quests, I was raiding. I raided casually in Vanilla, and at a progression-competitive level during The Burning Crusade, and it’ll be interesting to see if those types of communities will form again towards the end of next year. Onyxia’s Lair, Molten Core, and, of course, the whelp room where Leeroy Jenkins made his way into video game history. There are multiple, scaling endgame pursuits, and if the game maintains a dedicated fanbase months into its lifecycle, these places will see incredible battles fought once again. If people log in, play around until level 10, and then decide to head on back to Battle for Azeroth, or even other games entirely, then Ragnaros and his fiery cohorts will remain lonely in the depths beneath Blackrock Mountain, and Classic will feel like an amusing distraction rather than a true remake. That’s the thing about massively-multiplayer games -- if it’s just you, by yourself, it can feel like you’re only playing half of it.

But this brings us back to the point of the remake, really: who is it actually for? Going by both the marketing and those actually showing interest in it, it’s Vanilla players looking for a trip down blade-swinging memory lane. But is that enough to meaningfully sustain it? It’ll definitely be a novelty for those who started playing much later into the game’s lifespan, but having so many of the features they’re used to stripped away in Classic may be a little too much to bear for the countless hours it takes to finish. Early MMORPGs were based on people working together to fill team gaps for group quests and dungeons, in a way that matchmaking tech handles for us now. Its absence in Classic will sting for those who prefer to play solo and occasionally dip into the odd dungeon or raid without interacting too much with anyone else, as well as players who are used to jumping in and out quickly. 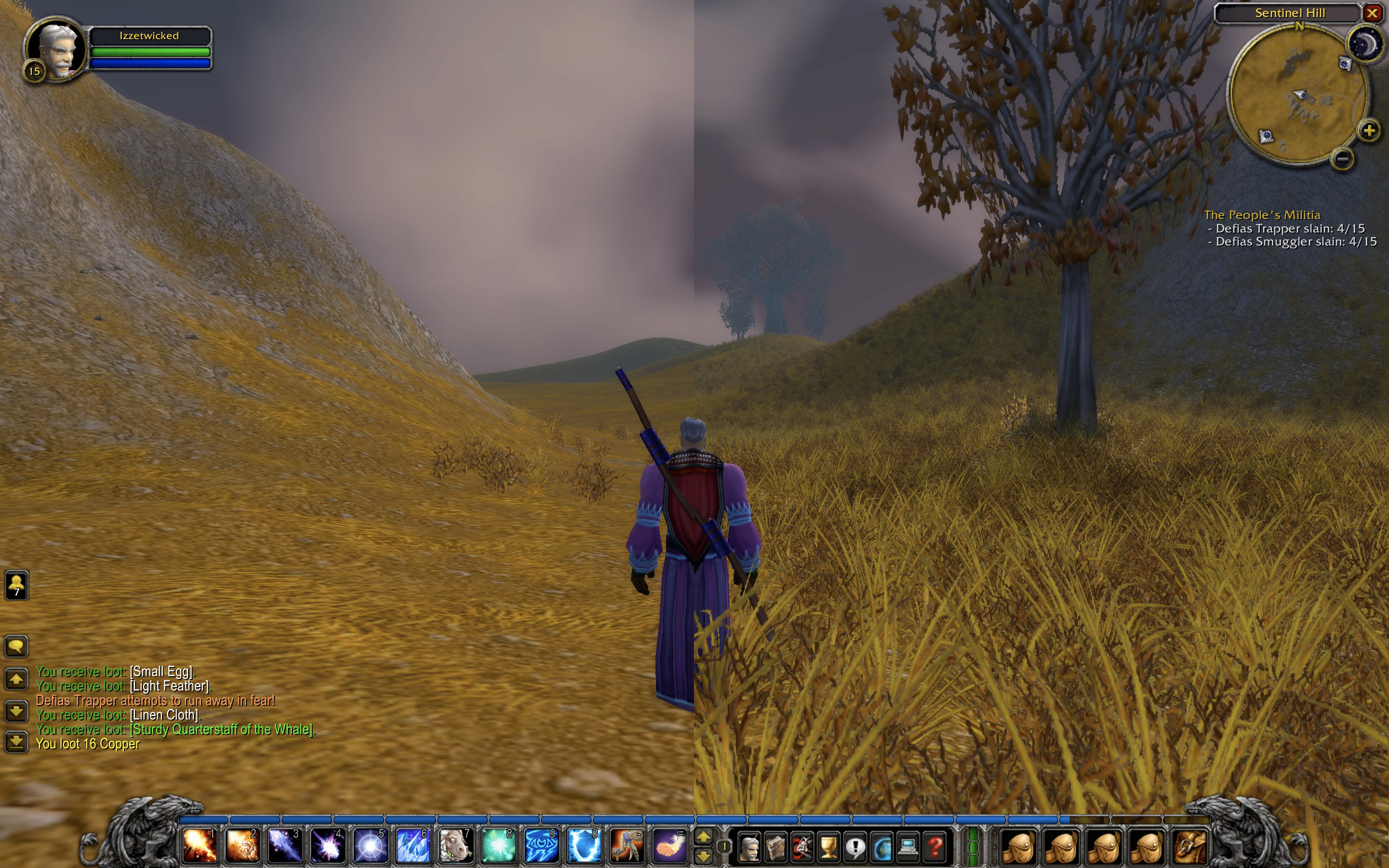 The caveat, of course, is that even if you’re on board for Classic, most of the game isn’t actually available to test in the demo, as it only lets you level up a few times within a couple of areas. Pick Horde, and it’s a chunk of the Barrens; pick Alliance, and it’s Westfall. If you got demo access with this year’s BlizzCon Virtual Ticket then you’re able to play it at home right through this weekend, and don’t need to head to the show floor -- which is an exciting and inclusive move on Blizzard’s part, and one I’d like to see more publishers consider going forward.

Classic will arrive whole in the summer of 2019, say Blizz, and will be included in the unchanged cost of your current subscription fee. I’d rather have the option of paying a smaller, separate fee solely for Classic, as well as being able to bundle both together if you want. Many folks don’t return to WoW for long stretches of time, and if the prospect of wading through quiet, older expansion content doesn’t appeal, but Classic does, being stuck with one-price-fits-all might lessen that appeal.

If Blizzard decides to add things like matchmaking, it may swing more people into aiming for endgame, knowing they won’t have to run an entirely new guild or chat-channel-organize a 40-player group just to play through older content. But despite potential teething problems, I, like many other WoW veterans, couldn’t be more excited to head back. For me it’s an opportunity to get back to basics, to experience old memories, and to do so in a way that takes some of the best capabilities of newer technology to power old-fashioned experiences. If Blizzard continue to consider quality of life additions and balances things like better graphics and easy group-finding against skill proficiencies and the older, boxy character models, it’ll feel slick as anything.

But, even if they don’t, it’s okay. Because your childhood home isn’t perfect, and not all the memories were happy. But if you can experience it on your own terms, knowing everything you know now, then maybe that’s enough. Your glasses don’t need to be rose-tinted here - just in front of eyes willing to accept that what they sees is clunky, overcomplicated, and uncompromisingly genre-changing. Vanilla is back. Let’s go farm for Thunderfury.