I've never been so called out by a game name. Look, I took a break from driving for like six months because of the pandemic. You try going that long without having to parallel park, yeah? They say the skill comes back quick but it most certainly does not. Thankfully, Happy Volcano's You Suck At Parking does not actually make you drive a real vehicle. Rather, you're plonked in a funky little video game car (or van, or lorry, or occasionally steamroller) with a simple end goal: park good.

It's kinda like a weird racing game. Your objective is to stop, yes, but you must do so very quickly, and often without exploding.

Playing the You Suck At Parking PAX X EGX demo, the premise was fairly simple. If you come to a full stop before hitting your designated space, then You, Sir, Suck At Parking. You leave the vehicle you were using behind on the track, and respawn quickly in a new one. This causes problems, however, when you manage to stack six cars around a parking space you can no longer reach.

I suppose the solution here is to just be good at video games. But also you can push the stationary cars out of the way with your one. Just like in real life!

When you do complete a level and do a nice park it's very rewarding. Big letters come up on the screen saying "You Rock At Parking". Not enough people use the term "You Rock".

Doing the good parks isn't always so simple, though. You Suck At Parking really eases you into a false sense of security at the beginning. The first few levels are simple, with maybe a corner or two thrown in there. The second zone really ups the difficulty. And by difficulty I mean the need for good depth perception, because it adds ramps. You need to line your little motor up properly before yeeting yourself across to your spot.

As you progress, you need to perform more and more elaborate sick tricks 'n' flips to get to the endzone. One has a loop-the-loop where you have to time yourself flying off the side. Then, of course, there are tracks with other cars hurtling towards you, speed boosts that make you fly into places you shouldn't be, and even roads littered with mines. 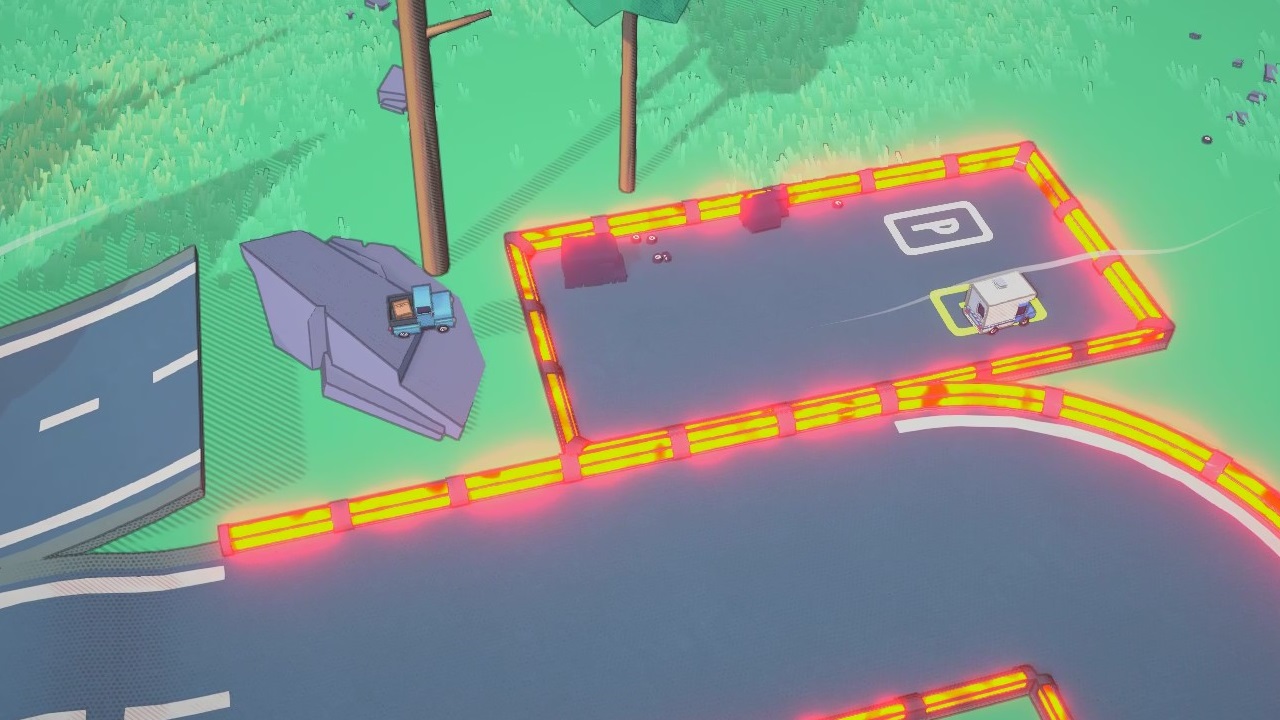 I (stupidly) didn't realise the levels titled "Look Mom, No Boom" would have elements that made your car blow up. I don't know why. I just didn't really think about it. That is, until I immediately crashed my car into the very boomy barriers around the track. Adding in the fear of exploding a vehicle should you so much as tap the sides is a nice touch, and one that really puts the "extreme" into "extreme physics-based parking game".

Despite You Suck At Parking being one of those games where you have to restart over and over again, it's never rage-inducing. Some games where you repeat the same bit loads can be annoying, but in this, your failures are just quite funny and part of the ride.

That's exactly what You Suck At Parking is, though: a silly, lighthearted game where you get to crash little toy cars in all sorts of fun and wacky ways. But you should be parking them. I hope there's not a test after this.

You Suck At Parking is set to come out sometime next year, and for now you can find the free demo over on Steam.