1 Screen Platformer is a misnomer: the level might technically fit within 1920x1080 pixels, but the camera is zoomed in at all times. That means you never see the level as laid out above, with all the many deaths that await you on a single screen.

Still, the idea is sound: a single level of tricky platforming challenges to be completed with 4 characters, each of which brings its own specific twist. 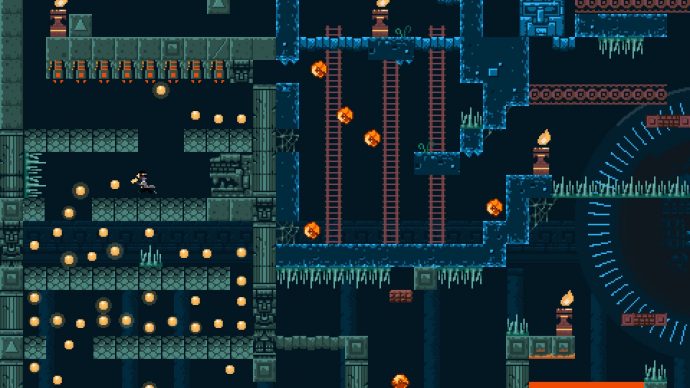 Otherwise it's as resolutely straightforward a platformer as I've played in years. You can double jump, but otherwise the physics are simple. There's no feeling of momentum to your movement, no wall-jump and no air control. Instead, it's all about that level, which packs a dozen or so tricky if familiar challenges into its small space. There is lava and there are spikes and there are lasers that fire on a timer.

You can decide for yourself whether that sounds interesting to you, but the game - which costs 79p, by the way - is pitched as a kind of palate cleanser, a short game you play in between other games. It worked that way for me. I completed it with the four characters in about 40 minutes altogether, and then started over on the hard mode which introduces more deadly obstacles to the same level and removes your double jump. I completed it this way with one character and got most of the way with the second, and then it was bedtime.

I likely won't go back. 1 Screen Platformer's other pitch is that it is "the hardest 2,073,600 pixels you will ever play", and I only started to find it proper difficult near the point when I quit for the night, but I'm not actually interested in overcoming the challenge ahead. It is a fine game, but it has already served its purpose: it entertained me for roughly as many minutes as it cost in pennies, and it left me refreshed and ready to play some longer games.