There’s an easy grace available to you in Yoku’s Island Express. Steer the main character onto any of the pinball flippers embedded in the floors and walls and you can punt him into the air as predictably as a jump in any other platformer. Use those paddles to aim Yoku into one of the other pinball-inspired mechanisms, however, and the game takes hold, shooping Yoku and the ball through tunnels at high speed, or smoothly rolling it down paths littered with objects that spin and shimmer. This grace is something I’ve never experienced when playing an actual pinball table, and it made my time with Yoku a delight.

My experience of real pinball tables involves watching three balls, one at a time, bounce in unpredictable patterns around a board and then plummet unreachably between the two flippers at the bottom. I am bad at pinball, and bad in a way that means I can’t even see the path towards becoming good.

I am not good at Yoku’s Island Express either, but the difference here is that the game doesn’t care. It doesn’t punish me for failing, it is not scoring my performance, and it does not regret having given me the money to have a shot in the first place. Instead, it feels almost solely concerned with players having a good time. That starts from the game’s very first moments, as you arrive on a golden beach under blue skies to relenetlessly peppy music. The island you then explore is a continuous space encompassing snowy regions, underground caves and other typical platforming settings, and there’s a Rare-like upbeat quality to all of it.

In each region of the island you’ll encounter enclosed areas which function somewhat like a traditional pinball board, with two paddles at the bottom and an array of bumpers, widgets, lights and other obstacles above you. You can think of these like dungeons, and they form the game’s main challenge. You’ll swing the colour-coded paddles (using different triggers on the gamepad) to fire Yoku and the ball he’s tethered to into smashable boulders, to shake loose and collect door parts to open new paths, and eventually to defeat a boss. 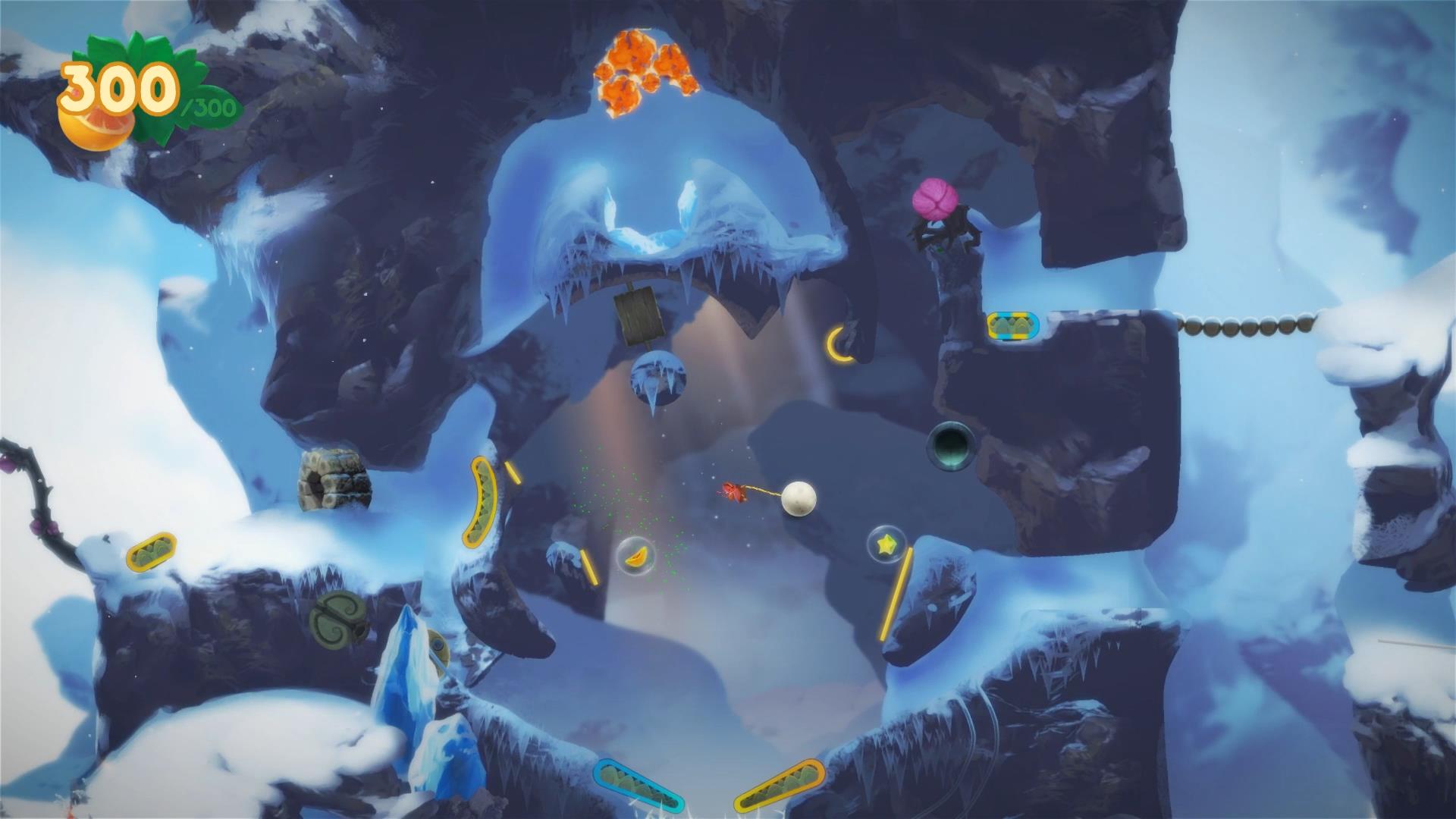 Sidebar: Yoku’s trailers and music are so good I decided to review it myself, which led to the revelation that I have no time or brainspace to review games. Sorry this is so late.

I enjoy these areas more than an actual pinball table because, as mentioned above, they’re easier. If Yoku’s ball disappears between those two paddles, I wouldn’t lose a life; instead I lost some fruit to a set of thorns, and then was quickly in position to re-launch myself into the fray. I did die a handful of times by completely running out of fruit, but after a mysterious scene recorded my demise, I was again back in the action with no real progress lost. By the time I reached the game’s later stages, which do feature more complex boards and multi-stage bosses, I’d upgraded my pouch to carry so many hundreds of fruits that death was never a risk. It’s a game that’s more concerned with an escalation of spectacle than challenge.

Real grace is found when I’m not in control, however. That’s the case in the rails and tunnels I mentioned above, which are supremely satisfying every time you hit them. It’s also true in the broader world when using the Beeline, the fast-travel system that loops around the entire map. It’s a set of cannons that you can fire yourself between with single button presses and no aiming, and flip-punting from one end of the world to the other was never less than gleeful.

Unfortunately the powers that did require my input were more uneven in their offered satisfaction. For the first half of the game, each new area requires Yoku to first gather an items that bestows a new ability. The worst of them is called the Slug Vacuum. To use it, I would hit nests embedded in the environment to shake loose a slug, then ping Yoku close to that slug to trigger a moment of slow-motion during which I’d press a button to suck up the slug. The slugs – or their juice? – are explosive, and after vacuuming them on to my ball, I’d be able to destroy previously unbreakable obstacles by hitting them with Yoku. This was a chore every single time. I’d sometimes try to vacuum too early and need to let go and re-press the button before the action would register. If I took too long in hitting the target obstacle, the slug juice would wear off and I’d need to start over. In a game about correctly launching a ball into targets over and over again, turning each instance of that into a three-step process doesn’t make it any more fun.

Compare this to the leash, an item which triggers a similar moment of slow-motion when near plants you can latch onto and swing from. You can spin around that plant for an infinite amount of time and choose when to let go. Precisely timing your release brings grace under your control as you launch towards higher platforms or chain together swings to climb into the sky.

All this pinging, swinging and flinging is paired with a similarly light approach to story, art and music. Yoku is a dung beetle who has recently been employed as postmaster on an island in turmoil due to an attack on its deity. While trying to unite tribal leaders and save your god, you’re also stuffing mailboxes with letters, chatting with chirpy yetis, and helping plant mushrooms in locations they’ll feel comfortable.

Almost every interaction is cute. Fruit, the game’s currency, floats inside bubbles that pop and shoop towards the UI counter upon collection. You can also find this collectible inside pots, as per a million other platformers – only here you smash the pots by blowing a noise maker and letting loose a shower of confetti. It’s a feel-good game, more concerned with using pinball to put a spring in your step than paddling you into submission. In the five hours it took me to finish, my progress slowed only once, and then it was because I’d failed to notice the NPC I needed to talk to in order to open the path ahead.

Yoku’s Island Express feels to me like a palate cleanser. I played it in short bursts at the end of long days and was refreshed by it each time. It’s not rich enough in terms of its ideas and set-pieces to get under your skin and I likely won’t remember much of the details of my time with it a year from now, but I will remember that it provided me with easy, simple pleasure. I could use a few more games like that in my life.