For reasons I cannot fathom and that are probably lost to the bowels of their marketing department, Western Digital have decided their high-performance Black line of NVMe SSDs were in need of a face lift for 2019, because apparently gum stick-sized storage drives don’t look ‘gamer-y’ enough already. The result of their somewhat baffling nip and tuck is the Black SN750, which I think you’ll agree looks exactly the same as last year’s Black NVMe SSD albeit with a slightly different sticker on the front.

Or at least that’s true of the regular version of the Black SN750, as there’s also going to be a special heatsink edition available sometime next month. That one does look a bit more upmarket and ‘gamer-y’, if such a thing is possible, but that’s not the one I’ve been sent for review. Instead, you’ll have to make do with wot I think of the normal Black SN750 for now. Can it beat our SSD champion, the Samsung 970 Evo? Let’s take a look.

Available in 250GB, 500GB, 1TB and (at a slightly later date) 2TB capacities, WD claims the Black SN750 is capable of delivering blisteringly fast sequential speeds of up to 3470MB/s read and 3000MB/s write. The former isn’t really much of an improvement on last year’s Black figures, which maxed out at 3400MB/s, but there’s a much bigger gain to be seen over in the writing department, which only reached a high of 2800MB/s on the 1TB version.

This is the heatsink version, which does, in my opinion, look rather swish, but do we really need SSDs with go-faster-gaming-stripes?

In truth, WD’s official speed figures are a little bit all over the place for the Black SN750, so I’ve summarised them in a table below. As you can see, the top 2TB capacity is actually slower than the 1TB model I was sent for review, but WD told me that’s because they’ve used a slightly different manufacturing process for that particular capacity – a denser 512Gbit die instead of the usual 256Gbit die you’ll find in the rest of the family. Generally, the more, lower density dies you have in any given SSD, the faster it’s able to write and read data simultaneously, which is a massive simplification of how SSDs work but effectively explains why the 2TB version and its 512Gbit dies aren’t quite as zippy as the 256Gbit 1TB model.

I mean, I doubt you’re really going to notice such a drop in practice, but given the state of my testing results, I think you’ll be hard-pushed to notice any difference at all compared to the WD Black from 2018.

WD didn’t say whether their figures were based on the heatsink or non-heatsinked version of the Black SN750, but I can only assume they were obtained on the former because the non-heatsink model I tested produced pretty much exactly the same results as their old Black NVMe SSD when I put it through my usual AS SSD and CrystalDiskMark tests.

Without the benefit of the heatsink version’s built-in cooling technology, the regular Black SN750 finished AS SSD’s 1GB sequential test with a read speed of just 2117MB/s and a write speed of 2690MB/s when I tested it with my Intel Core i5-8600K, 16GB of Corsair Vengeance 2133MHz RAM and an Asus Prime Z370-P motherboard, both of which are just a handful of MBs either side of the old Black’s results of 2176MB/s read and 2680MB/s respectively. That means its read speed is still 28% slower than Samsung’s 970 Evo, while its write speed is 12% quicker. 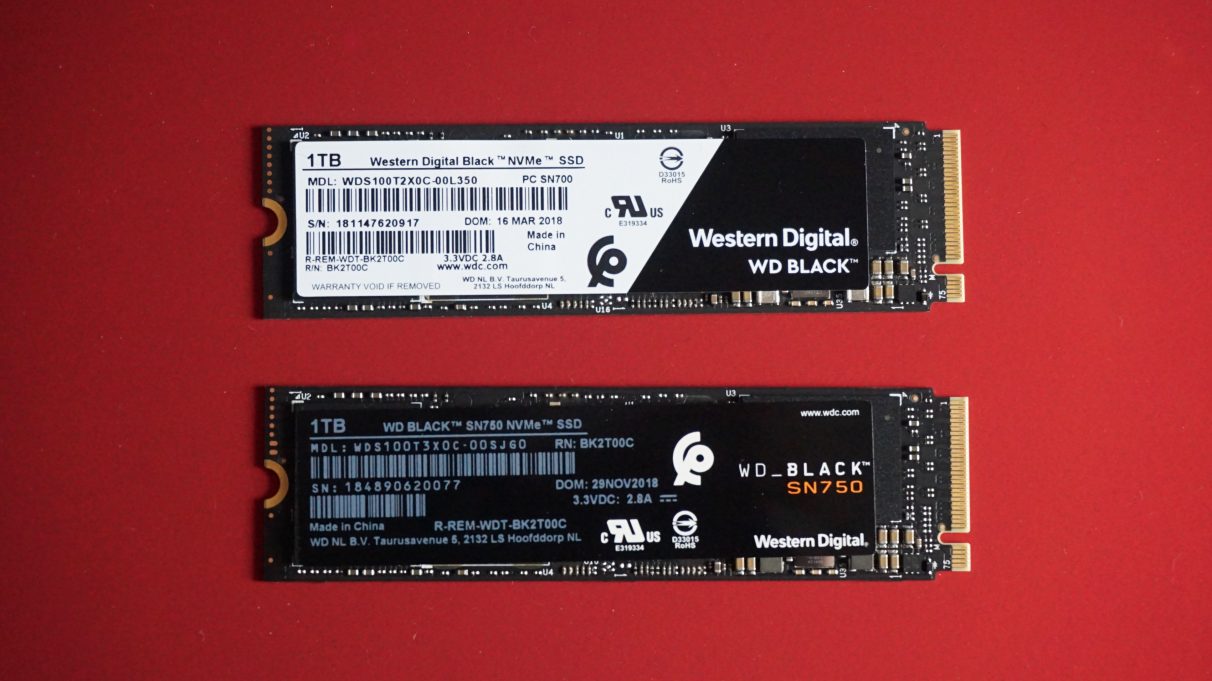 Does one look more gamer-y to you than the other? 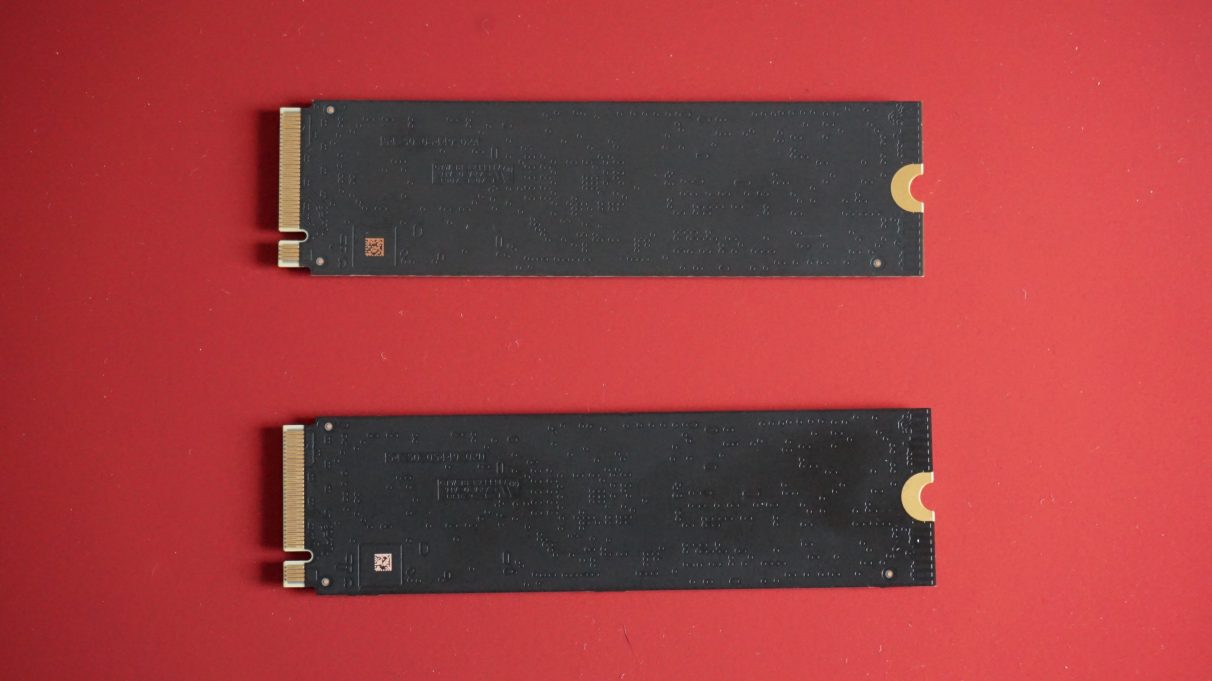 But we all know sequential speeds aren’t a very good reflection of the kind of speeds you’ll get day to day, as sequential tests act like an SSD reads and write everything in nice straight lines. In reality, they’re reading and writing bits all over the shop, making random tests a much more accurate gauge of what you’ll see in everyday use.

Here, the Black SN750 actually performed worse than its predecessor, reading AS SSD’s 1GB 4K random test at just 44MB/s, and writing at 148MB/s. The old Black, meanwhile, finished with 46MB/s and 155MB/s, putting the SN750 even further behind the 970 Evo’s random read and write speeds of 56MB/s and 170MB/s.

Admittedly, the SN750 does have a small trick up its sleeve that can help raise its read speed back up to old Black levels, and very nearly almost match the 970 Evo’s writing performance. You’ll have to download WD’s SSD Dashboard software to take advantage of it, but it’s as simple as flicking the switch on its newly-added ‘Gaming Mode’ option. This disables the SSD’s low power state for snappier performance, and when I tested the SN750 again with this switched on, its random read speed rose to 45MB/s, while its write speed was up at a much more impressive, not to mention more competitive, 167MB/s. 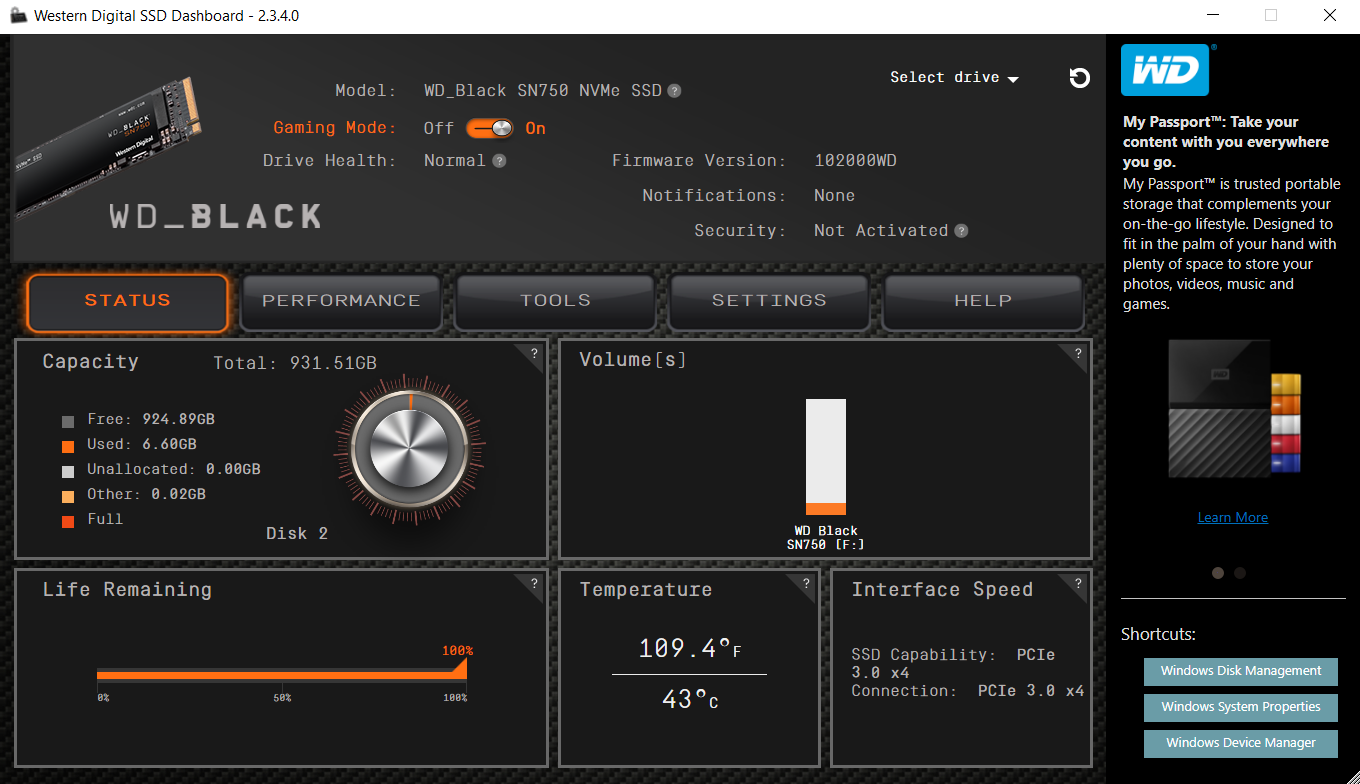 WD’s revamped their SSD Dashboard for the Black SN750 as well, adding in a new ‘gaming mode’ option to help increase performance.

That’s pretty decent as these things go, but the 970 Evo is still king when it comes to heavier workloads as well. For this, I enlisted the help of CrystalDiskMark’s demanding random 4K 8-queue-8-thread test, which the Black SN750 finished in just 1521MB/s read and 1502MB/s write. That’s a full 25% slower than the 970 Evo’s scores, which just scrape over into the region of 2000MB/s apiece.

Salvation may yet be had in WD’s heatsink edition of the Black SN750, of course – although I should note this will only be available in 500GB sizes upwards (sorry, 250GB hopefuls). It’s also worth pointing out that your motherboard may already have its own NVMe heatsinks built in, like those found on the Asus ROG Strix B360-F Gaming or MSI X470 Gaming M7 AC (mine did not), in which case you wouldn’t be able to fit one in anyway.

The Black SN750 may well make more sense if prices ever dip below the 970 Evo in the coming months, but for now, the 970 Evo is still the NVMe drive to beat.