When Western Digital announced their brand-new Black 3D NVMe SSD at the beginning of April, it looked like it might finally bring some much needed competition to the all-powerful Samsung 960 Evo and potentially cause a late-game upset in our SSD best of.

With superior claimed sequential write speeds, equal sequential read speeds, a more generous endurance rating on the 250GB model and so-close-you-can-feel-them-breathing-down-your-neck pricing, the WD Black NVMe SSD (2018) looked like a mighty fine prospect for anyone contemplating an upgrade to their SSD setup. And in some respects, it very much is a mighty fine prospect. Then Samsung went and gazumped them with the release of their 970 Evo and, well, completely tipped it down on WD's parade.

That's pretty good going as far as the competition's concerned, and it even matches or surpasses the Samsung 970 Evo in almost every size category. As illustrated by the lovely table below, the WD's sequential write speeds are all faster than Samsung's claimed speeds, and it's pretty much neck-and-neck on sequential read speeds, too. Throw in a five-year warranty across the board, and respective endurance ratings of 200 terabytes written (TBW) at 250GB, 300TBW at 500GB and 600TBW at 1TB, and WD's new M.2 form factor SSD stacks up as a pretty decent alternative.

In testing, those faster sequential write speeds proved to be very much the case, too. I was sent the 1TB model for review, and in AS SSD's 1GB sequential test it managed a speed of 2680.1MB/s. That might not be quite as high as advertised, but when the 1TB Samsung 970 Evo only managed 2391.7MB/s write in the same test, that's still a mark in the WD's favour.

That said, the WD Black's sequential read performance was even further from its claimed 3400MB/s, as my particular sample only finished in 2175.8MB/s. That's quite a bit behind Samsung's 970 Evo, which managed a much more respectable 2954.1MB/s, while the 960 Evo came in with 2484.6MB/s.

In truth, though, sequential speeds aren't really the best indicator of how fast your SSD will be in real life, as data is rarely, probably never, stored in nice, adjacent blocks that are all in a straight line. Instead, they're chucked about all over the place, a little bit stored here, a little bit there, and a little bit everywhere, even if your files all look like they're in the same physical location in Windows Explorer. 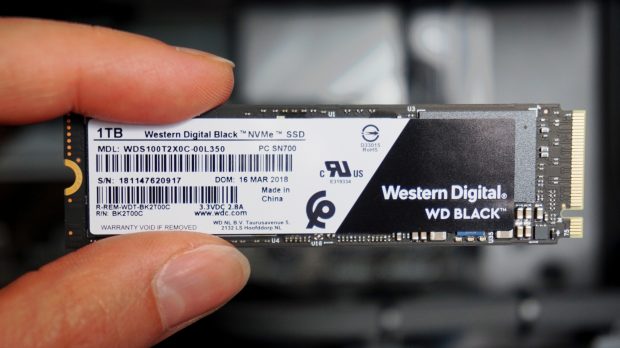 As a result, I put the WD Black NVMe SSD through AS SSD's random 4K test as well, which reads and writes a gigabyte's worth of tiny 4K files all over an SSD's storage and is a much more accurate representation of how your SSD performs everyday. Here, the WD Black managed a read speed of 45.7MB/s and a write speed of 155.4MB/s.

This is pretty much on par with the previous set of Samsung NVMe SSDs, the aforementioned 960 Evo (which produced 42.4MB/s read and 143.9MB/s write), but this year's 970 Evo was streets ahead in both categories, coming in with speeds of 56.1MB/s read and 169.7MB/s write.

Okay, so maybe not quite whole streets ahead - perhaps a lane, or a mews would be more accurate - but the WD Black NVMe SSD is still clearly on the back foot when it comes to everyday performance, as you can see from the graph below (where I've also included results for the 2.5in Samsung 860 Evo, just so you can get an idea of how WD's NVMe drive compares to today's best 2.5in SATA drive).

This would be fine if the WD was considerably less expensive, but when current prices put them more or less on a level playing field (the 970 Evo is actually a bit cheaper at time of writing, costing £98 / $110 at 250GB and £176 / $199 at 500GB), the Samsung is definitely better value for money overall. 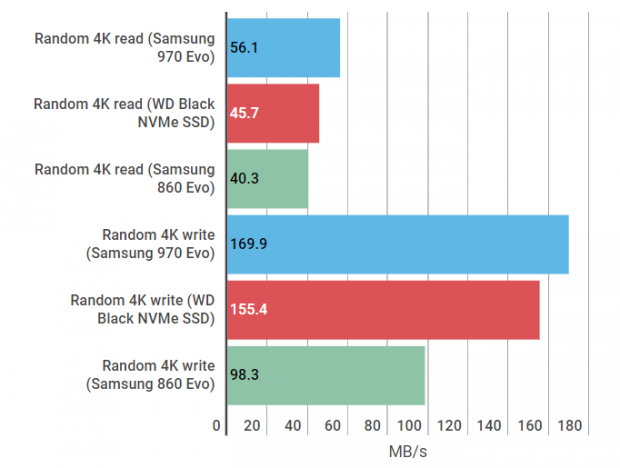 The same thing happened when I put the WD Black NVMe SSD through the most strenuous test on my benchmark list - CrystalDiskMark's workstation or server-grade 8-thread-8-queue workload - as well, returning a read speed of 1737.7MB/s and a write speed of 1678.4MB/s.

Again, this would have been brilliant if the WD Black NVMe SSD was competing against Samsung's old 960 Evo, which was actually a bit slower when I tested it earlier this year. But when the 970 Evo completed the same test with results of just over 2000MB/s read and write, it's clear the WD Black NVMe SSD has a lot of catching up to do before it can really go toe-to-toe with Samsung's latest and greatest.

Of course, whether you'll actually notice these differences in daily use is always hard to quantify when you're dealing with these kinds of split-second speeds, but it would appear that Samsung has once again piped WD to the NVMe post when it comes to best-in-class SSDs.

Indeed, unless WD's pricing happens to collapse over the next couple of months, the Samsung 970 Evo is still very much the NVMe SSD you should be buying, especially at 250GB and 500GB. At 1TB, things get a little more interesting, as limited stock in the US seems to have actually pushed the 970 Evo a lot higher than the WD Black NVMe SSD ($510 as opposed to $400), but in the UK, the 970 Evo still reigns supreme across every size category.