For the past three years, Samsung's 850 Evo has been consistently one of the best SSDs money can buy. It's often been more expensive than the competition, but its speed, endurance rating and generous five-year guarantee have all helped it secure its place as one of the mainstays of any PC gaming build. Finally, however, it looks like the 850 Evo's time at the top is about to end, as Samsung's just replaced it with the brand-new 860 Evo.

Or is it? A quick look at its specs will reveal the 860 Evo isn't about to rewrite the rulebook when it comes to overall speed - indeed, Samsung's claimed sequential read speed is just 10MB/s faster at 550MB/s while its sequential write speed is an identical 520MB/s - so if you're mainly concerned with stuffing as many MBs down your storage pipes in the time it takes to have a swig of tea as possible, then the 860 Evo probably doesn't have much to offer you over its cheaper, outgoing cousin.

Of course, an SSD's endurance rating is almost impossible to test without using it long-term, so I'll mainly be concentrating on what kind of read and write speeds you can expect from the 860 Evo and whether it's worth stumping up the extra cash for it. In this case, I've got the 2.5in model of the Samsung 860 Evo in a 2TB capacity, but it's also available as an NVMe stick (which requires an M.2 slot on your motherboard) and mSATA form factor for laptops.

Much like its predecessor, the 860 Evo uses Samsung's 3D V-NAND technology (or vertical NAND) to pack in more memory layers than older 2D NAND devices. By stacking cells vertically instead of in a single plane, 3D V-NAND not only lasts longer and uses less energy, but it also enables an SSD to read and write files faster and come in greater capacities. 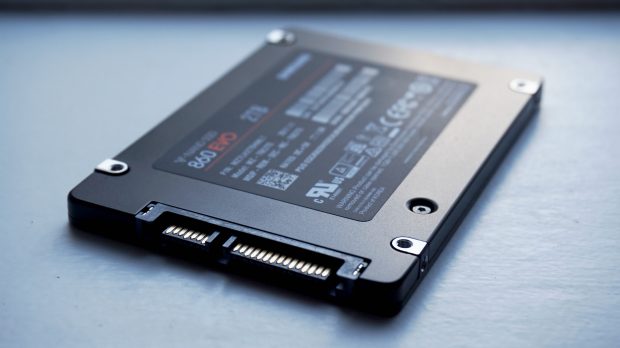 The only problem with the 860 Evo is that it's so close to the 850 Evo in overall zippiness that it essentially comes down to a photo-finish-type scenario on which one's actually quicker. For instance, I tested both SSDs on the same system (which comprises of a 3.6GHz Intel Core i5-8600K, 16GB of Corsair Vengeance 3000MHz RAM and an Asus Prime Z370-P motherboard, so is unlikely to hold either of them back) and put them through the same tests in AS SSD and CrystalDiskMark.

The first test was AS SSD's 1GB sequential test, which reads and writes 1GB of files in adjacent locations on the SSD. Your SSD doesn't typically behave in this way, but it's a best-case scenario kind of speed and often the one that's quoted by manufacturers. In this test, the 860 Evo managed 524.5MB/s read and 496.3MB/s write. The 850 Evo, meanwhile, came in at 512.5MB/s read and 498.6MB/s write.

AS SSD's random 4K test didn't help put any distance between them either. This reads and writes 1GB of data split into 4K chunks all over an SSD's storage, and is much more indicative of the kind of speeds you'll actually see in everyday use. Here, the 860 Evo produced speeds of 40.3MB/s read and 98.2BG/s write, while the 850 Evo edged ahead with 41.7MB/s read and 98.1MB/s write. 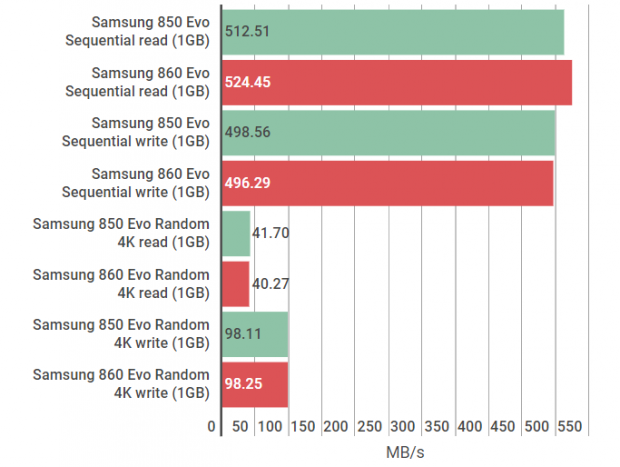 Even CrystalDiskMark's intensive random 4K 8-queue-8-thread test (which is closer in workload to what you might see on a server or workstation) couldn't help settle the debate, as both scored a write speed of 360MB/s, while read speeds came in at 403.3MB/s for the 860 Evo and just 401.1MB/s for the 850 Evo.

Really, then, the 850 Evo is still an excellent buy in terms of overall speed, and current 850 owners have no need to upgrade either. The 850 Evo also comes with the same five-year guarantee as the 860 Evo, too, so unless you're going to be writing all those hundreds and thousands of TBs covered by the 860 Evo's endurance rating in less than that time, UK buyers are probably better off saving themselves a bit of cash and sticking with the 850 while it's still available.

I'd probably still recommend the 850 Evo over Crucial's new MX500 as well (which you can read more about in our Crucial MX500 review). While Crucial's drive doesn't cost as much as the 850 Evo and scored a nigh-on identical speed in the sequential test, its random 4K results were 9% slower when it came to reading in AS SSD, and 25% slower writing. For some, that might be worth saving an extra tenner or so depending on what capacity you go for, but I imagine most would be happy paying a bit more for those faster write speeds.

So grab a Samsung 850 Evo while you can, is my advice to UK PC gamers. There's no telling how much stock will continue to float around now the 860 Evo's out, so get one now before it's gone. Video editors and such will likely benefit from the extra endurance offered by the 860 Evo, but for everyone else UK-based, the 850 Evo is still the SSD to beat. Those in the US, however, can safely ignore all that and go for the 860 Evo instead. Unless you really like paying more than you need to, of course.