Videogames were a presence throughout my childhood, thanks to my dad having a PC for work. When he didn’t need to use it, I was allowed to tinker and explore. The games built into the computer like Solitaire, SkiFree and Fuji Golf, as well as the CD-ROM games we got from stores like Office Max and Borders, quickly became second nature to me.

Now, looking back at publications and exhibitions intended to showcase gaming history I realize that some of my own experiences are often missing. While many influential PC games are well known and we can trace their influence on videogames today, there are more blind spots when it comes to the CD-ROM boom of the mid-90s. These games were built for an audience that was familiar with PC software but perhaps not with games, and even in their own time they ignored the conventions of game design. This led to types of experimentation videogames of today can still learn from.

Small Worlds can be Bursting with Details 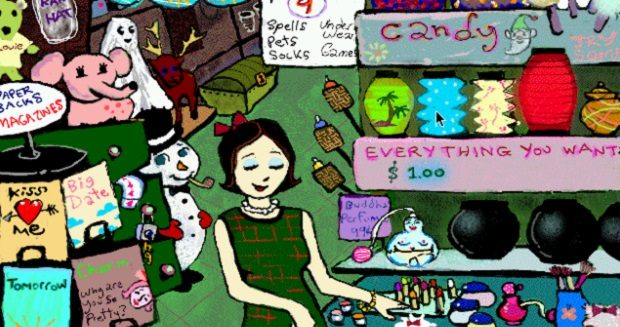 Theresa Duncan was a writer and filmmaker who collaborated with artists and musicians to create the rich, collage-like worlds in her CD-ROM games, Chop Suey, Smarty, and Zero Zero. While these games are usually limited in scope to a simple story that takes place in a small town, every scene the player can navigate to has an abundance of hidden songs, animations, minigames, and bits of narrative.

Duncan had no previous experience making games. By today’s standards her games seem limited by the capacity of CD-ROM discs, the features Macromedia Director offered, and the capabilities of home computers at the time. But to Duncan and her collaborators the CD-ROM format opened new frontiers that Macromedia’s tools made accessible. The tiny worlds within these games, restored to be playable online by Rhizome, are full of life thanks to Duncan’s familiarity with writers like David Sedaris, who provides voiceover narration, and musicians like Brendan Canty of Fugazi, whose influence can be felt in the punk rock songs that play in the diner’s jukebox or a bedroom record player. 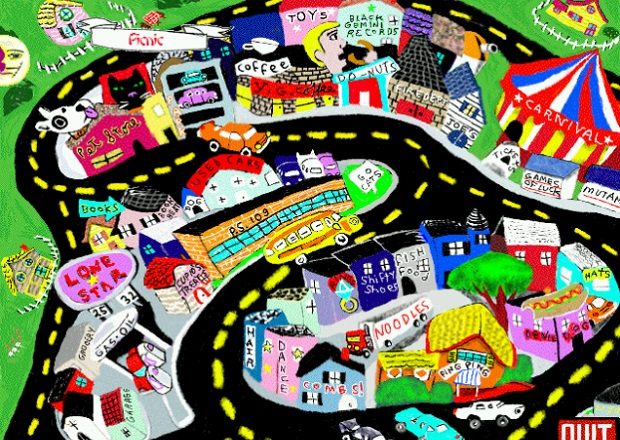 These games also differ notably from other software for children because they do not shy away from more risque or challenging content, while still remaining age-appropriate. In Zero Zero, players can encounter Benjamin Walter, a librarian writing a book about the possibilities for the 20th century, alluding to the philosopher Walter Benjamin. A nearby cheese shop features various food characters reenacting the French Revolution. In Chop Suey, the main characters (and player) get a taste of adulthood by rummaging around their Aunt Vera’s house and meeting her new boyfriend Ned, who follows three failed marriages with different men named Bob. These themes are always imbued with an element of mystery, magic, or just plain silliness to make them intriguing to kids, rather than boring or intimidating. 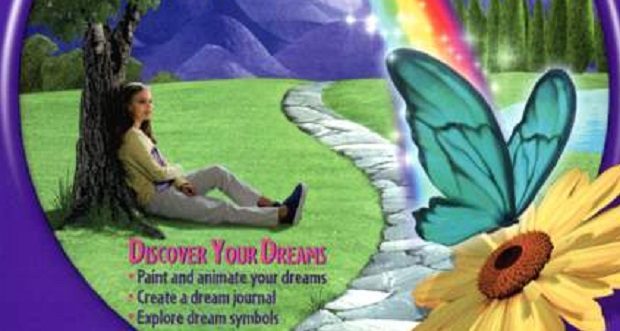 From rocket-jumping to speedrunning, and active modding communities, players have always gotten creative with videogames, even if the games themselves didn’t explicitly encourage that type of play. Many CD-ROM titles tapped into the existing creativity of gamers more deliberately, becoming like “software toys,” a term Will Wright liked to use to describe Maxis’ simulation games. Phil Salvador notes in a panel from MAGFest 2017 that while Maxis is celebrated for SimCity (1989) and The Sims (2000), the many experiments in simulation they released between those games are rarely discussed.

One rather unconventional simulator from this period was SimTunes, created by Toshio Iwai, an artist and musician who would go on to create Electroplankton for the Nintendo DS. SimTunes still feels uniquely freeform, simply allowing the player to place colored pixels that produce a certain sound when wandering musical Bugz walk on them, encouraging creative synthesis of visual and musical composition. Creating your own projects was fun, as was experimenting with what sort of soundscapes the randomizing spraycan tool would produce, but SimTunes also provided example illustrations to play with, many of which are memorable to this day. Like the collaboration between Maxis and Toshio Iwai, they were created by bringing together people from many different backgrounds. One of the most popular was created by Nintendo illustrator and art director Benimaru Itoh.

Many other games from the time offered a similar site for creativity and experimentation. Brenda Laurel’s girl games oriented company Purple Moon created a choose-your-own adventure style series, which allowed girls to test out and play through different resolutions to common social situations. Purple Moon also produced Secret Paths to Your Dreams, a combination journaling and art game that allowed players to make animated dioramas of their dreams. 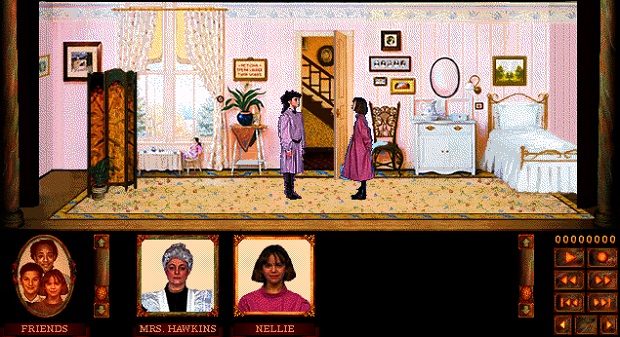 The game initially guides you by providing a narrated dream, and unlocks more brushes and effects to use when you complete these requests, but this is just a warmup for journaling and bringing your own dreams to life. You start off by choosing an overall theme for the dream, each offering a different selection of backgrounds and clipart pieces which will animate and make sound when your dream is completed. If that’s not enough, you can also paint with plain or textured brushes. Even if I couldn’t remember my own dreams, being able to draw, not just with line and color but with sound and animation was really satisfying, and something that the more familiar MS Paint didn’t offer.

American Girls’ Premiere similarly let players build sets and create simple stageplays with the American Girl doll characters. With a drag and drop interface, you select props and characters, adjusting their location onstage. You can change the FMV actor’s costumes, set the time when they will walk to another point on the stage, and assign them simple actions or lines, read in a typical Microsoft Sam voice. Of course the effect was awkward and stilted, and most of the plays my sister and I “directed” capitalized on this quality to make something extremely goofy, but it was an early instance where I felt like I could make something fun with a computer, and that fueled my later interest in technology. Other Maxis products, like Widget Workshop and Klik n Play were accessible ways to build digital contraptions or simple games yourself. While their capabilities may seem limited now, how they enabled unconventional and accessible creativity lives on in the creators they influenced, and new game making tools like Bitsy.

Target Markets Can Have Broad and Lasting Appeal 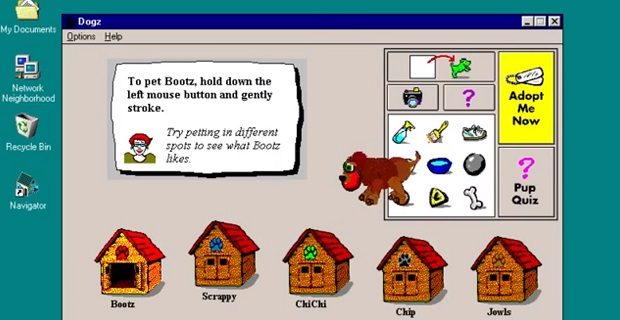 Many of these CD-ROM games aimed for target groups that were new computer users rather than established gamers. This may be a part of why they are often forgotten in videogaming history, but these unconventional aims also led to new innovations.

An early demo video for PF Magic’s Petz series is careful to avoid typical videogame language to emphasize how their take on the virtual pet genre has as broad appeal as actual pets. The initial prototype Ballz eventually expanded to both Dogz and Catz, then later Babyz. Interacting with their chosen creature with a richly-animated hand cursor, the player mainly has to interpret their behavior based on their own knowledge of how a cat, dog, or baby behaves. I loved the Petz series, both Dogz and Catz. They amazed me as a child, because the expressive animals really seemed “alive” and reacted with body language rather than flavor text or basic icons to what I was doing. Even today, I think their familiar reactions hold up as particularly well-animated. They were so compelling that many players, especially girls, taught themselves hex editing to create custom Breedz, and made their first websites to show off and swap them.

The Girl Games movement of the time is often maligned due to the early success of Mattel’s Barbie Fashion Designer, which inspired a parade of dress-up themed copycat games that had a limited imagination for what girls could appreciate in videogames. Educational titles are similarly criticized for an abundance of uninspired, quiz-based games. Yet these issues shouldn’t resign these categories to failures that would better be forgotten in the history of videogames. Because as a format, they were still finding their feet and determining what audiences they could reach. As with any other era, 90s CD-ROM games did involve lots of lackluster titles, but more importantly there are plenty of charming hidden gems worth remembering, and avenues of development and creativity that have been ill-served since.