Did you know that the process of cremation doesn’t turn your body to ash? It’s actually the cremulator, another machine, which mills the bone down into a fine dust. It's details like this that you'll encounter while playing A Mortician’s Tale, a point-and-click job simulator inspired by the work of mortician and author Caitlin Doughty and the death positive movement she helped found.

In the game you play as Charlie, a newly hired mortician at the independently owned Rose and Daughters Funeral Home. Your duties include preparing bodies of the deceased and attending funerals to pay respects to their loved ones. A Mortician’s Tale gives us a new way to look at corpses in video games. Instead of killing a person, we’re asked to take care of them after they’ve died. Rarely do we get the opportunity in games to approach a dead body and interact with it respectfully.

The bodies you prepare in A Mortician’s Tale are low-poly models, with heads that are slightly larger than the rest of their figure. The abstraction of the corpses serves to underline how differently the game treats death. As opposed to being rendered as hyper-realistic, there are no open wounds or blood. Instead of doing the killing, you're encouraged to spend time with the body as its caretaker. It's part of the death positive movement which strives to normalize the discussion and fear of no longer being alive, and the game depicts dying as a normal part of the human experience. 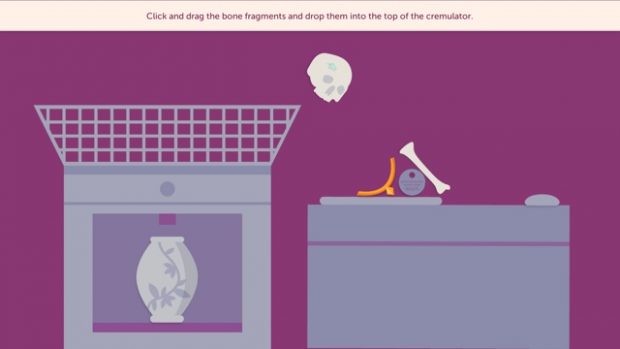 The bulk of A Mortician’s Tale’s narrative is contained within the conversations between Charlie, her colleagues, and friends through a simulated desktop. The funeral director assigns you to a corpse paired with a short description of what services you are to provide per the family’s request. You can choose to ignore the conversations held with the hearse driver or fellow death-enthusiast friend, but that would be a great disservice to the game.

Relayed through these personal messages are the real-life complications that come with running a small, family-owned funeral home, which in reality are often swallowed by larger companies who in turn overcharge for their services. This happens in the game, and its through the story that A Mortician's Tale depicts the ways in which the western death industry feeds on grieving families by being forceful or adding unnecessary fees to turn a profit.

These larger companies are able to do this arguably because of society’s fear of death and the ways in which the industry of dying is shrouded in mystery and misinformation. Before Rose and Daughters is bought out, players can click a separate tab on their desktop to see how much the funeral home charges for their services. Email exchanges between Charlie and her boss encourage you to be as accommodating as possible to the grieving family members. Your boss is kind, fussing over you to make sure you wear the right gear when embalming and offers praise after a job well done. This is repeated after Big Corporation takes over, and the difference in price and attitude is glaring. Services are more expensive and the messages from your new boss uses are steeped in the language of business. He pushes you to oversell and follow a sales guide, completely erasing the foundation previously set up for you. Do yourself a favor and take the time to read the contents of every exchange, and your experience will be richer for it. 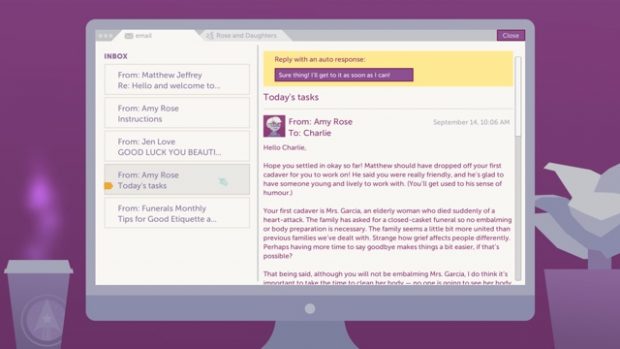 Then comes the task of preparing the body. Depending on the service, you’ll either be cremating or embalming the deceased. You’re presented with an inventory, where you click and drag items to the appropriate part of the deceased. Step-by-step instructions guide you in explaining what each tool is and how it’s used to prepare the corpse. For example cotton is dragged and dropped inside the mouth to give it shape, and if the deceased is being embalmed, the fluid must be guided through every appendage to evenly distribute the chemicals by following an outline with your mouse that covers the length of a limb.

After preparing the body comes attending the funeral. You walk throughout the room and listen to the tales recounted by loved ones of the deceased. You provide a polite bow to pay your respects. And then back to work you go, repeating the process.

In a world where of videogames where dying is central to the playing experience, A Mortician’s Tale is a rare breed which explains to us how our bodies will be treated after our demise and asks us not to be afraid of the process.