It turns out that a surefire way to ignite interest in your visual novel is to make it about axolotls and then send an email about it to someone who desperately loves axolotls. Have you heard the good word about axolotls, ma’am? I can leave you some informational leaflets about axolotls. Please consider letting the light of axolotls into your life. Enter, stage left: RB: Axolotl, a visual novel about a bunch of axolotls living in the same tank. Or is it? It’s crowdfunding for a full release, but has a demo allowing you to sample its extreme weirdness for nothing.

RB: Axolotl (from context in the demo I believe the RB stands for 'Rock Bottom') advertises itself as ‘dark’, and has one of those very serious disclaimers warning about its adult themes. The character you follow in the main is Axy the Axolotl, who lives in one corner of a tank that houses four other axolotls besides him. Like the Seven Dwarfs, but if there were five of them and they were fun aquatic beasties, there’s Joyful 'Lotl, Cute 'Lotl, Nerd 'Lotl, Depressive 'Lotl and Violent Misanthrope 'Lotl; the trailer says that it’s ‘inspired by illness’ and once you’ve played the demo it’s easy to read the axolotls as being manifestations of distinct parts of a whole personality. Axy is optimistic and almost irrepressibly happy. He’s pink, and in love with Lanna, who is purple. The first few minutes of the game progress as one would expect from a VN: sweetly, and with much exclaiming, and indecision over which tense we're using.

Let’s briefly pause to discuss real life axolotls. I talked for some time about how they are wicked cool on last week’s podcast. This is an axolotl:

As explained by Nate Crowley, axolotls are salamander tadpoles that learned how to fuck. Albino ones are sort of a fetching pink colour, but they come in a variety of styles, including orange and, genuinely, glow-in-UV-light neon. Wild axolotls are a mottled yellow-brown, like a terribly mouldy jaycloth. Sadly, though, wild axolotls are almost extinct, and they now mostly live in captivity as pets or in labs, because the hideous duality of axolotls is that they 1) universally have expressions of cute stupidity, and 2) are capable of disquieting things that neither God nor science can properly justify.

An axolotl can grow back almost any part of itself, including substantial bits of brain. If you a plop few leg cells from a neon axolotl on an albino one, the albino one will grow a brand spanking new neon leg. Axolotls are monstrosities that should not be, but also look like someone put googly eyes on an old potato and threw it in a pond. Their existence is the stuff of nightmares. One can imagine that if axolotls were properly self aware they would be in an absolute state the whole time.

After a reassuringly cute start, RB: Axolotl drifts off the path you expect from it, until suddenly it’s careening wildly at topics like mental health, self harm, weird science, abuse, existential crises and reincarnation. With such a variety of topics it’s not surprising that their exploration in RB: Axolotl also varies in quality, but it does all make sense of the content warning, at least. 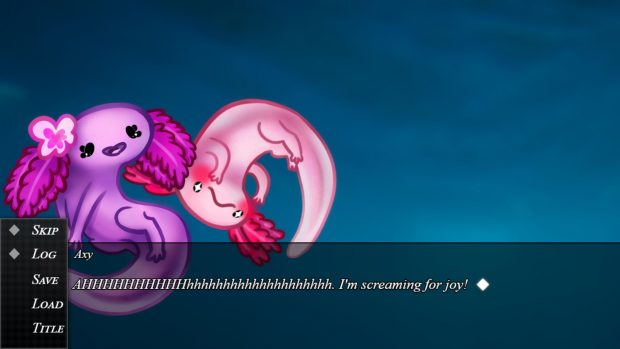 The more aware of their situation the axolotls are, the unhappier they become. Liam is a sickly green axolotl who is crushed by anxiety and depression, and is the only one aware of the giant eyes staring at them from outside the tank. His experience, and how he describes it, is probably the most interesting part of the demo. Nio, who wears a tiny lab coat, is studying a strange void that exists at the middle of the tank, and is unnerved by the discovery of books that contain scientific drawings of axolotls. Axy just thought axolotl was his name, and is very happy.

Thus, dear reader, is it not clearly true that the creature that most distills the human condition is the axolotl, as proven by the free demo of this VN? Mileage may vary. But RB: Axolotl is an intriguing cliffhanger that is worth exploring if you like VNs, and has definitely made me furious that axolotls don’t feature prominently in every video game ever. Imagine a giant one of these gormless, infinitely regenerating bastards flying at you, mouth agape, in a FromSoft game. Cut one arm off, and three more take its place. And they’re all a different colour. Argh.