When I first joined RPS two(!) years(!!) ago, one of the very first things I wrote about was RB: Axolotl, a visual novel about a bunch of axolotls living in different corners of a tank and having very intense, obsessive relationships with each other. At the time it was just a demo, but now it's a full game. I'm still playing my way through it, but indications after several hours so far are that the completed RB: Axolotl is weirder and darker than I could ever have imagined from the demo. This isn't a bad thing, to be clear.

I came to RB: Axolotl because I love and fear axolotls in equal measure. They are extremely cute and interesting but also unholy horrors of evolution that should not be. I stayed because the game had a similar thematic tension: initially it is a cutesy VN about a pink axolotl named Axy, who is trying to show off for the girl axolotl he likes. But then you meet the other axolotls in the tank. You encounter a mysterious external entity, RB (which stands for Rock Bottom). RB: Axolotl is, essentially, a perfect example of what I find so fascinating and worthwhile about visual novels.

RB: Axolotl ramps up the weirdness gradually at first, with the introduction of an incredibly depressed and anxious axolotl called Liam and an incredibly misanthropic, violent and abusive axolotl called Enc. The two hate each other, for seemingly no reason. Then you learn that your lotl' gang all sprang into existence a month prior, from a crackling void at the centre of of their tank.

Science axolotl Nio, who has built himself a lab and wears glasses and a lab coat, studies the void (don't we all?) and theorises that every 'lotl in the tank is created as part of an obsessive pair. Enc and Liam have their abusive, toxic thing, where Enc hates Liam so much that he can't not terrorise him, and Liam is scared and sick to the point of immobility. Axy is desperate to impress girl!lotl Lana, and Nio himself is obsessed with studying the void. That last one is pretty interesting. 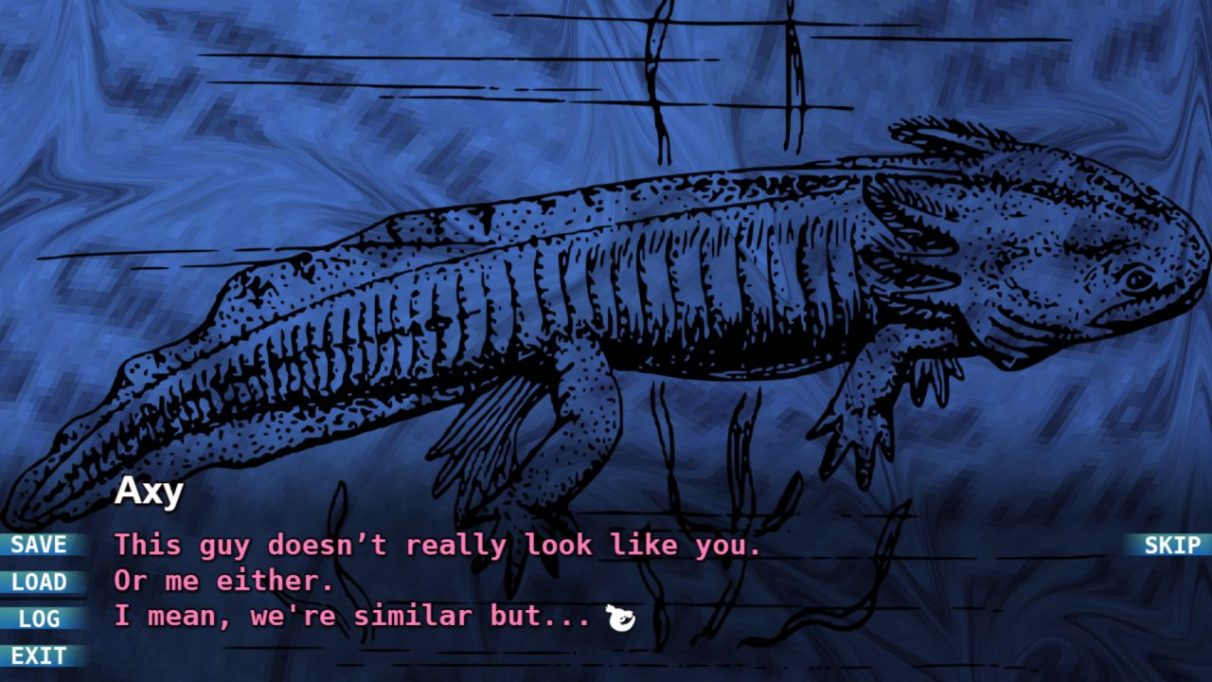 Where it gets super interesting is when the axolotls start talking about their self-awareness. Liam is aware of something watching them from outside the tank and it gives him The Fear, like, 100% of the time. Nio has a book that has scientific diagrams of axolotls but they are real axolotls and, crucially, the game makes it clear that the tank lotls literally look like the cartoony versions of the animal that they are drawn as. They are aware that they are axolotls, but also aware that they do not look like the real life axolotls.

Then Axy and Nio start discussing the existence of this alternate reality.

I haven't finished RB: Axolotl yet, but I am going to because I genuinely have no idea where it's going. I think that the axolotls may represent the essential, distilled personalities of some real life humans and that the tank is some sort of purgatorial test, like the Lost of amphibians. I am unsure how many of them knew each other in their other lives. Or if I am even correct.

I also have no idea what RB is, except some sort of powerful controlling force that is responsible for the axolotls month-long existence (so far) in the tank. It is a voice that exists outside the tank but not in the real world.

VNs like RB: Axolotl are precious gems that I am so glad I exist. And are the reason that VNs as a genre are amazing - a great space to spend a few hours exploring. As well as being a fertile soil for important stories, notably LGBTQ stories, they allow people to make loads of specific and super weird art, often subverting your expectations of what visual novels are, and even intentionally playing with those expectations. And make no mistake that RB: Axolotl is very weird, and dark, and earns the content warning it gives you. And is the sort of thing that could only exist as an indie VN.

It's on Steam now, if you dare.

This article was brought to you by the RPS supporter program.