Red Dead Redemption 2 is a game drowning in details, with its attempt to capture a simulated vision of an American west that's been gone for 120 years, down to every last shell casing, spittoon stain and sweat-crusted saddlebag. Probably my favourite thing about it all, however, is the obsessive, noachian fervour with which the natural world has been catalogued. There are some 234 animals in the game, with surprisingly few of them sharing the same models, and many interacting with each other in an impressive (if surface level) facsimiles of natural behaviour. 234! That's nearly three times the number in Planet Zoo, which is a game entirely about animals. Not a bad job at all.

Anyway, I'm going to review all of them. Let's go.

If you're looking for a proper guide article on where to find these animals, what hats to make their arses into, and the like, you won't find it here. And I've got 234 of the bastards to get through, so I might skim over some of the wading birds, yeah? But you'll learn loads, I promise, and some of it will be true. We do, in fact, have some actually useful Red Dead Redemption 2 guides too, though. 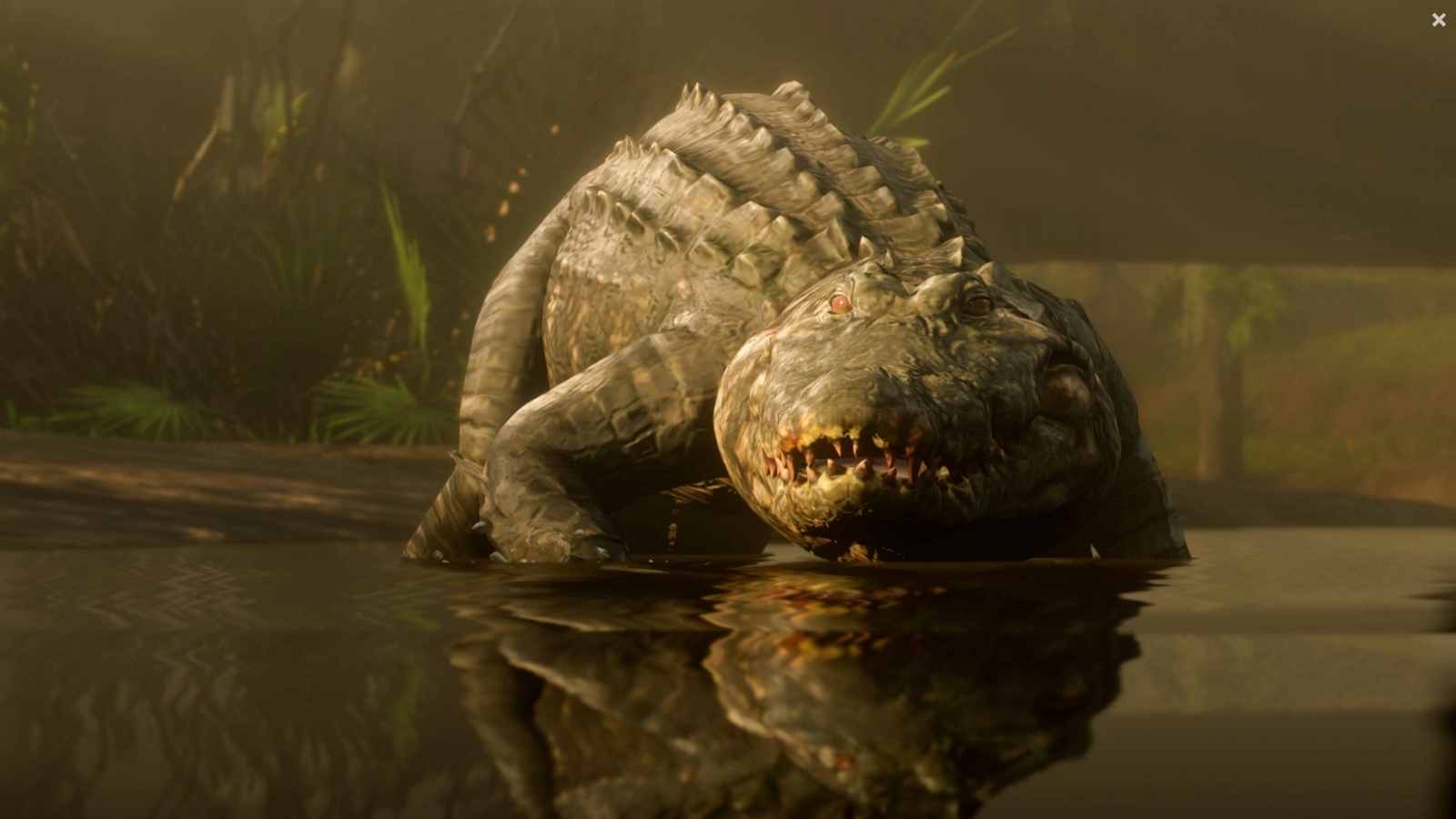 Big Scaly. Colonel Teeth. The Death Iguana. When it comes to massive reptiles that kill stuff in swamps, you can't beat alligators, and RDR2's are a treat. I love having the cowboy mosey as close to them as he can to study their habits, without them going mental and gnashing up his boots. There's a real quiet horror, too, to those moments where you're wading through a chest-high marsh, and you hear that throat-rumble that tells you there's one nearby that you can't see.

I feel a bit sorry for American Alligator (small). They're the only animal in the game that exists only to be a smaller version of something else, and I can't help but wonder what that does for their self-esteem. It's not even like they can grow into American Alligator (large) if they savage enough cowboys: they are born knowing the ceiling of their ambitions.

Verdict: 4/10. Precisely half the score of the proper alligators.

A Legendary Bull Gator is not a real animal, but bloke alligators are called bulls, and they are pretty intimidating fellows. The cowboy can hunt this one in the swamps around Lagras, and he is an impressively big boy.

I got the opportunity to hear a 400lb male American alligator emit a threat rumble once, as a researcher played it a tape of its own call to make it think a rival male was on its turf. At first I thought the demonstration was a bust, as I heard nothing. But then I saw the water above the gator's back begin to shake, as the rumble travelled up from the depths of infrasound. Then it was shaking the planks beneath my feet, and then it was making my lungs quake, like I was stood in front of a bass speaker at a metal gig. By the time the sound became audible, I was already consumed with atavistic threat response, as part of my brain knew for sure it was about to die. Absolutely fucking brilliant. It does, like many things, make me pity the cowboy, though.

Did you know that nine-banded armadillos almost always give birth to litters of four identical quadruplets? There's a set of foetuses preserved in ethanol at the Grant Museum of Zoology in London, which is worth a visit for many such curiosities. Armadillos also have ridiculously large willies proportional to their body size, which you should be careful in googling, should you wish to know more. 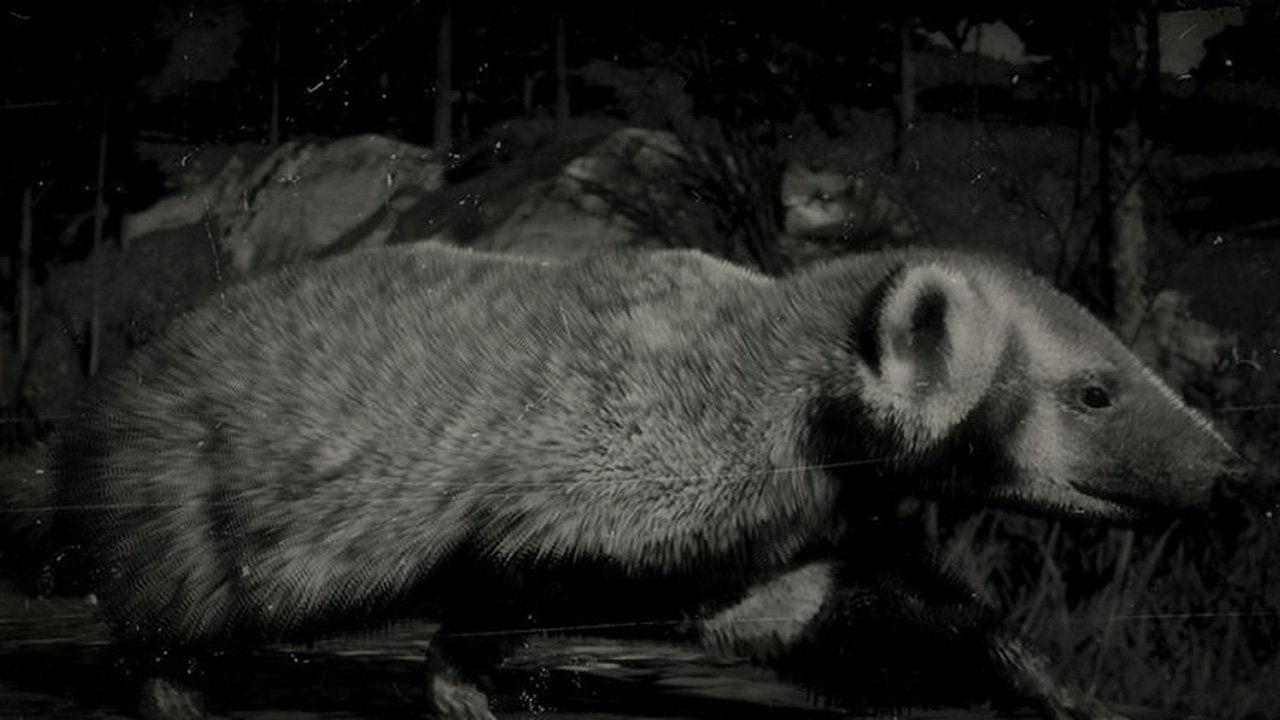 Bit cuter than European badgers, if I'm honest. I like when they scamper out from bushes when the cowboy rides past, with their odd, lopsided little run. Badgers do run funny; the first time I saw one IRL, my first thought was "bloody hell, a dog with no legs". Until the C17th, it was widely believed that badgers had legs that were shorter on one side of the body than the other, until Norwich-based polymath Sir Thomas Browne put the issue to rest in his (surprisingly entertaining) 1658 book Pseudodoxia Epidemica, which was basically Ye Olde Mythebusteres.

Bats are the most numerous order of mammals, with more than 1,200 species described. But you wouldn't fucking know it from Red Dead Redemption 2, where I once spent an entire evening trying to seek them out, with no luck at all, until I lost my mind and decided to roleplay as Batman. Luckily, however, I did stream the whole thing, and my pal Mark chronicled it here and then here.

While we're at it, Mark also did some cracking edits of the cowboy adventure I had for the RPS Christmas livestream, which I've included the first of below, as a treat.

Verdict: Dunno, never saw the bloody things did I.

A joke bear. Might be frightening if you found it having a rummage in your bins IRL, but to the cowboy, it's laughable. It's got a big round bum and it makes lovable, rough-edged honking sounds that just make you want to feed it a twix or something. Bearly worth your time etc.

Now that's what I call a bear. Horrifying, beautiful thing, like the vengeful spirit of a burned-down rug warehouse. Have you seen The Revenant? That's got a cowboy of sorts getting done in by a bear, and it really stays with you. Proper yikes. One of the best bits in RDR2 is when you're casually looting this one nondescript house out in the backwoods, and the second you open the door a fucking bear comes at you. That's a ticket to adrenaline city and no mistake. Crikey. Almost made me think twice about crime. 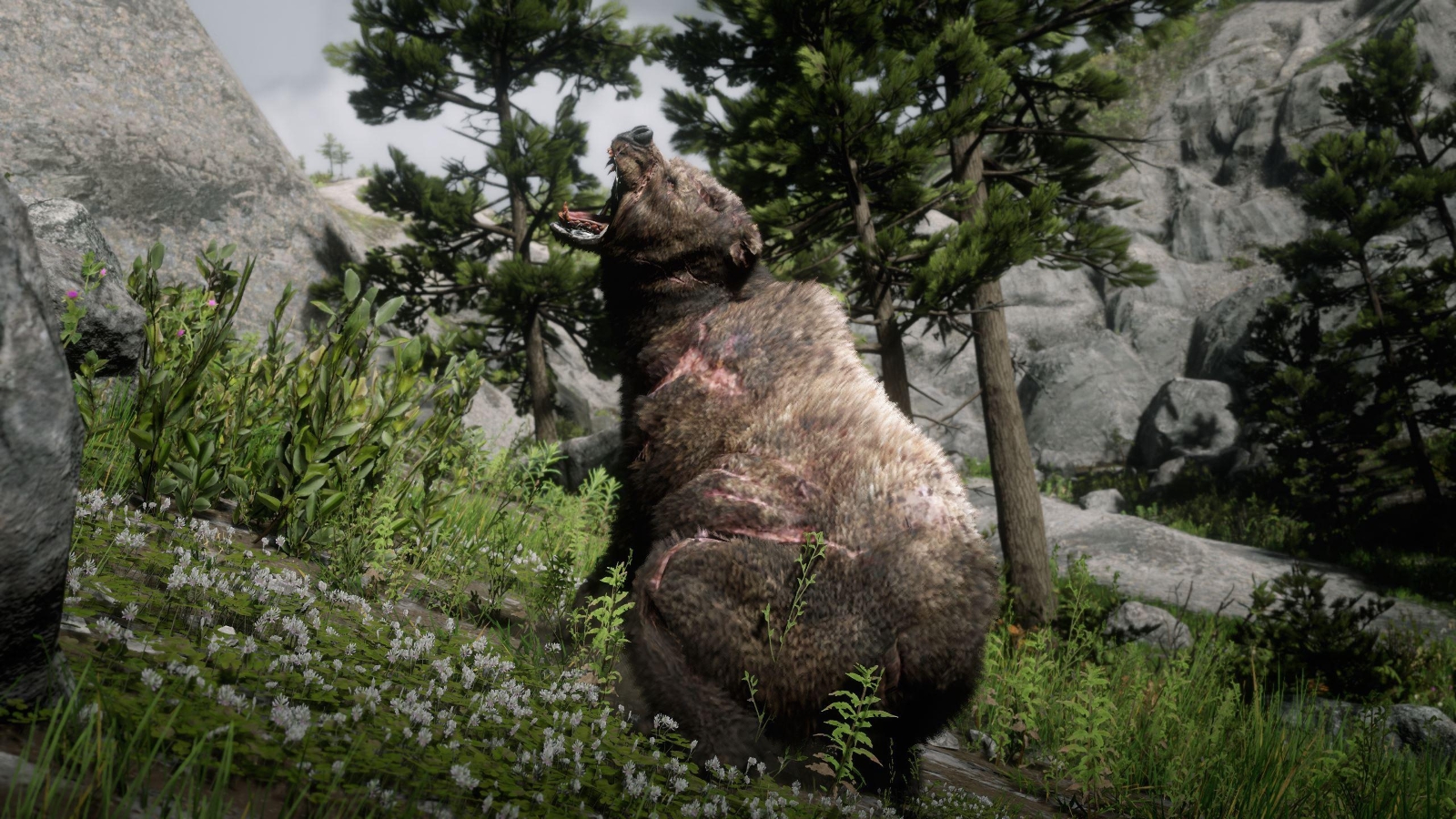 It's the regular grizzly, but it's even bigger and shaggier, plus it's got a messed up face like the man who threatens Luke Skywalker in that pub in the first Star Wars. It's got a fun quest attached to it first, that got me so amped up I had to hunt and slaughter a train afterwards just to calm down.

Verdict: 9/10. Not as good as regular grizzlies, cos there's only the one of 'em. And despite anything Tigger has to say, that's not a good thing.

I mean, they're fine. I remember getting weirdly engrossed in watching some in a nearby creek, while hiding behind a birch tree during a gunfight with some murderous hillbillies. I don't remember what the gunfight was about, but I remember the beavers. By the way, if you've ever wondered what it's like to eat a beaver's tail, there's a good article about it here.

You know what I really resent? Animal names getting co-opted as words for sex things. It's well annoying if you like having chats about animals, because it means getting interrupted every third sentence as someone has a tired hurr hurr over the fact you could be interpreted as talking about penises or vaginas. Beavers are pretty bad for this, but you know what's worse? Trying to explain the fact you've got pet crabs. I have crabs. Yes, that's right. I have crabs. Like the pubic lice, yes. Aha. 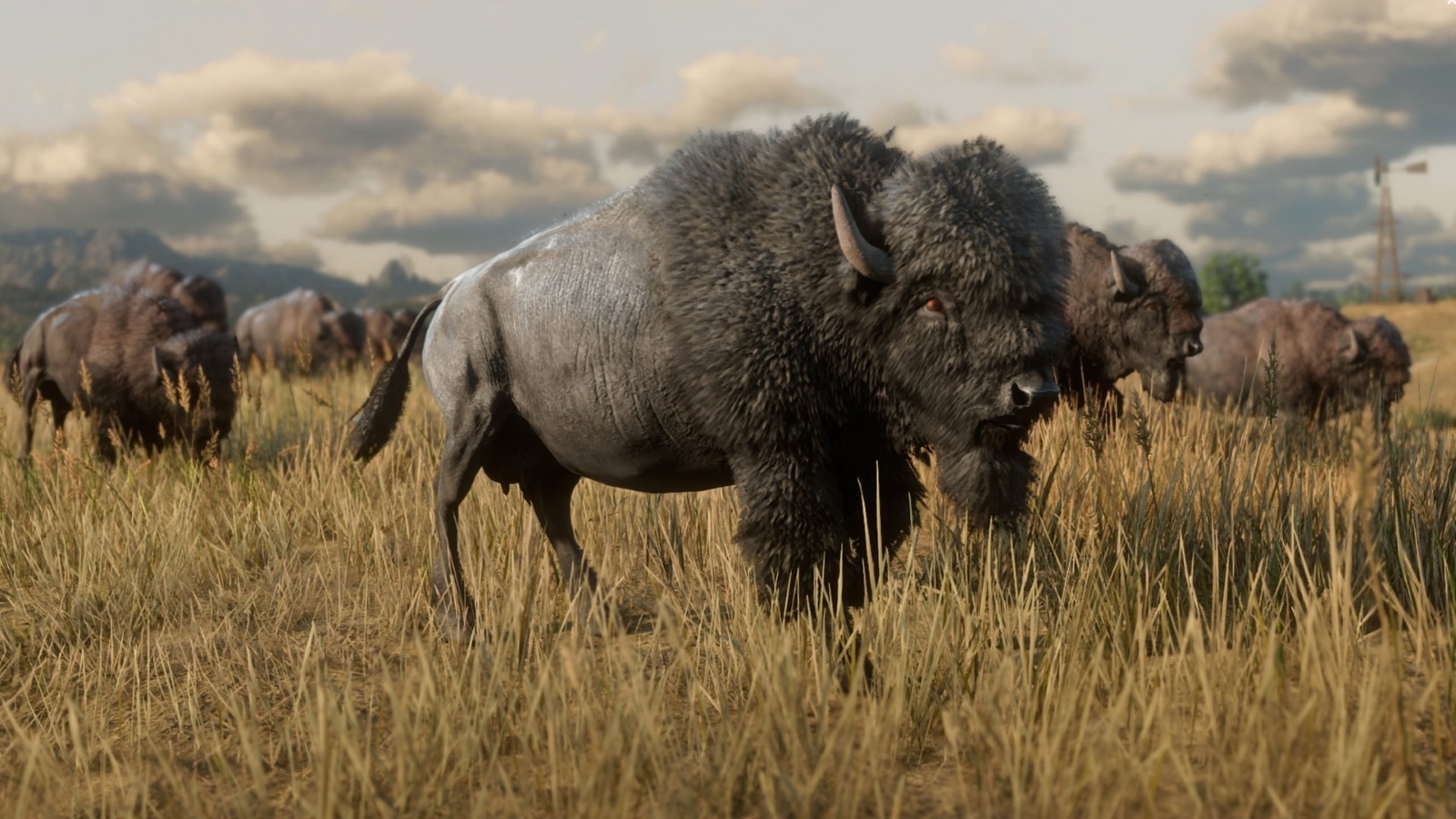 Before Europeans arrived in North America, there were somewhere between 30 and 50 million bison on the continent. By 1884, 15 years before RDR2 is set, there were thought to be around 325 left. Very grim stuff, and it feels pretty queasy to shoot them in RDR2, when you know that. In fact, I wonder if there's more bison in the game than there were in America at the time. Maybe. Anyway, thankfully, an effort to restore bison populations began at the turn of the century, and today there are half a million again. Not great, but not bad either.

What's even better than hunting an animal that's been decimated by centuries of extermination? Hunting a super rare variant of it! I'll stop there, and reassure anyone who's angry that I knew it was not a real bison, and so shot it anyway. But still.

Verdict: 9/10. All other concerns aside, it's a beautiful beast.

Tatanka is, of course, the Lakota word for the American bison, and was the childhood name of the famous leader Sitting Bull. So it's like the legendary buffalo kills in this game just get more and more culturally difficult. Apart from anything else, this legendary bison is pretty mediocre, being pretty much just a grey reskin of the regular bison.

Verdict: 2/10. Feels a bit like when you encounter red, slightly tougher versions of level one skeletons on the second layer of a dungeon, only with reminders of genocide to boot.

Did you know a Blue Jay is a type of corvid, like crows and ravens and that? Cos I didn't, until I looked them up just now. I'll be honest, I'm a bit rubbish at birds: a lot of them just seem really similar to me, and I know I should be more interested in them cos they're living dinosaurs and all, but the heart wants what the heart wants.

North American freshwater fish are lovely, and the bluegill is from a particularly fine group of them. One of its relatives, the pumpkinseed, is one of the most colourful fish you'll find outside of tropical waters. I remember sitting in a creek in Oklahoma once, and a bunch of these little sparkly blue lads just came up and started nibbling on my feet. I wonder if the cowboy used them as a sort of rugged spa treatment?

Verdict: 6/10. Splendid fish, but it's led me down a train of thought that ended in the thought of the cowboy's unholy, calloused feet, so I can't give it a higher score. 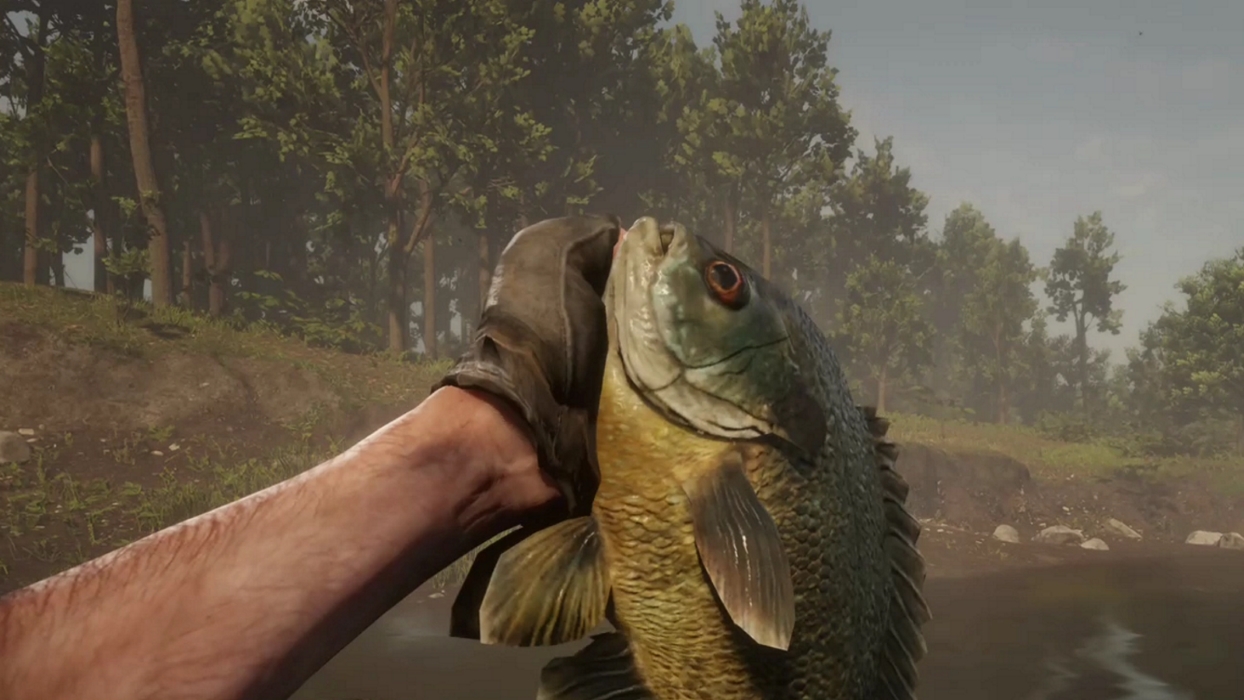 I mean, at four pounds in weight, it's not exactly leviathan, is it? What sort of legends got told about this thing? Also, like, bluegills only live about eight years maximum, which is not a lot of time for a legend to build up in, is it?

Verdict: 3/10. Should have just called it the Relatively Large Bluegill.

Verdict: 5/10. Perfectly average. RDR2 ain't the first game with boars, and it won't be the last.

One of the better legendaries this - I chased it through the bayou in a thunderstorm with a bow and arrow, vaulting gators along the way, and it was well exciting.

Verdict: 7/10. Solid, in every conceivable way. 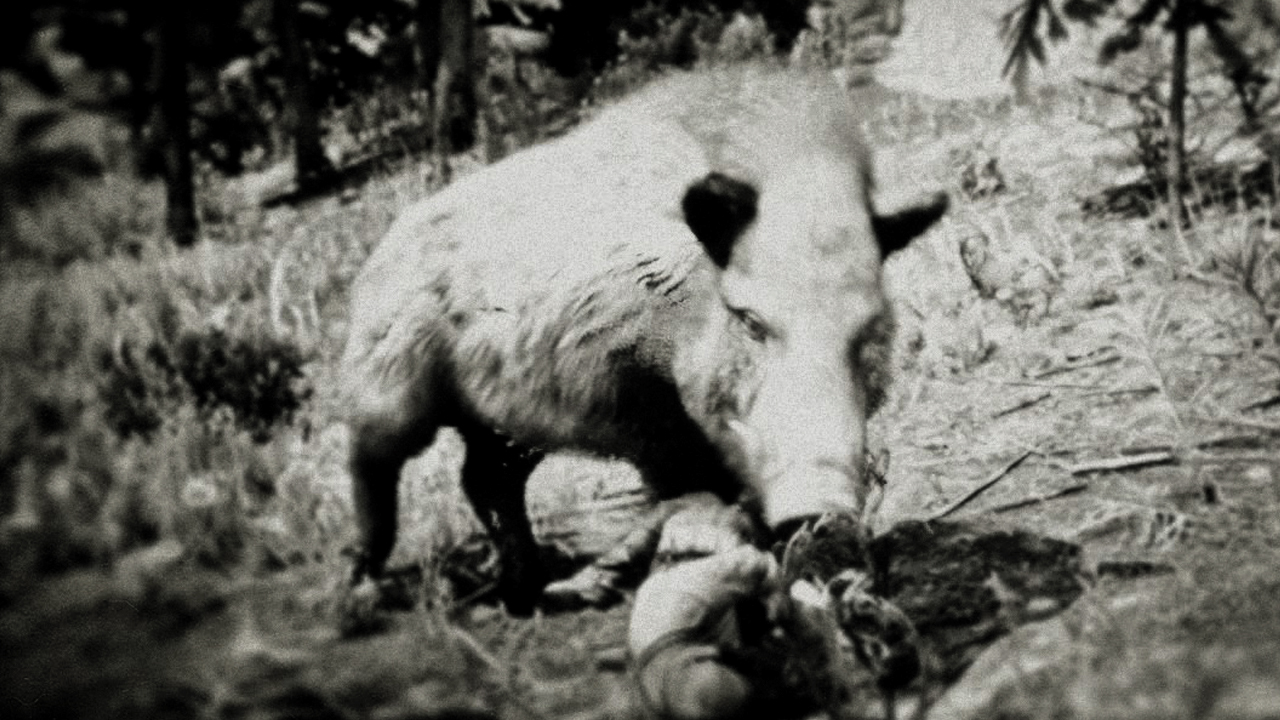 I feel like this fellow was unfairly cheated out of legendary status. I mean, just look at it. It's a colossus. Makes the giant man eating horror pigs off of Hannibal look like the little bloke from Winnie the Pooh in comparison. The only way the cowboy could have fought a more chilling pig is if Red Dead Redemption had been set twenty million years earlier, and he'd encountered an Entelodont.

Verdict: 10/10. Now I just want to play a game about a baffled, gruff, ageing cowboy trapped inexplicably in the early Miocene period.