It's been a little while since I did one of these, but those animals aren't gonna review themselves, so I'd best crack on. And with 43 already given definitive ratings for all time, I'm nearly a quarter of the way through the list. Well, more like one sixth, actually, but who cares about fractions? Anyway, today I've got a much more interesting selection to work through than last time's miserable collection of farm animals, so I'm in good spirits. Let's get our binoculars out, then, and have a little mosey. 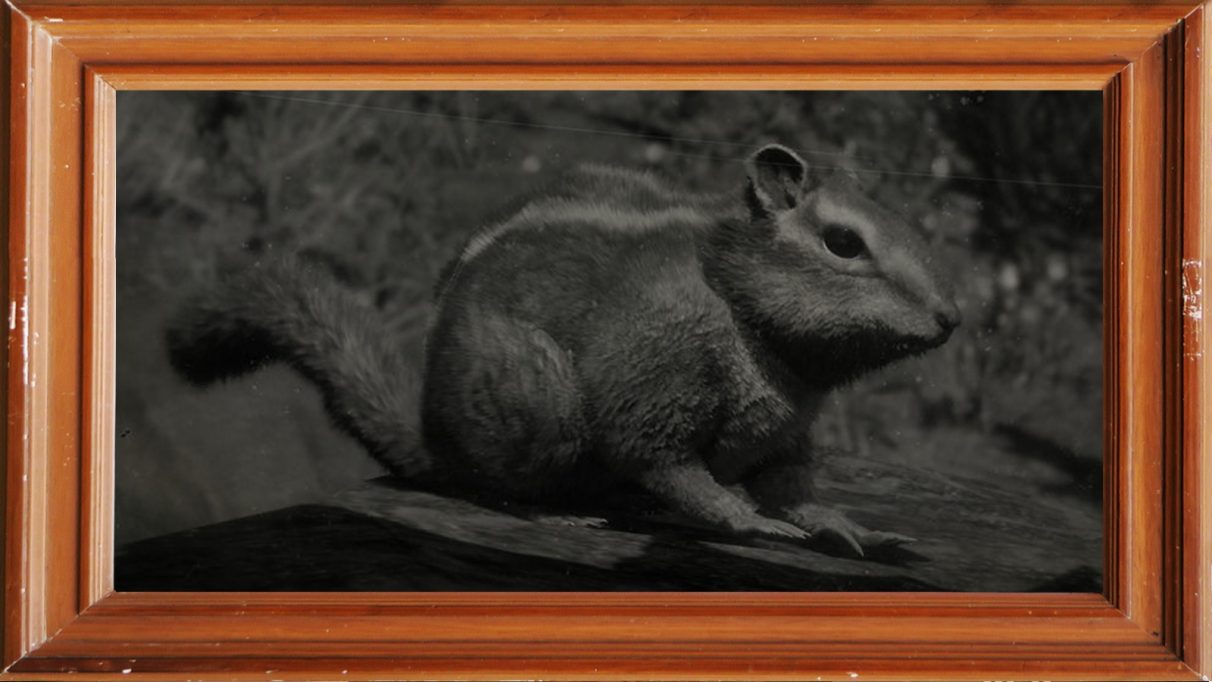 Not to be confused with the Chip Monks, a secretive sect of religious fanatics led by the deep fat friar. Chipmunks used to be quite a big deal, didn't they? I used to quite enjoy the cartoon Chip 'n' Dale: Rescue Rangers, although it's quite weird in hindsight that it was named after a famous troupe of male strippers. Do you remember they had a little plane that they flew around in? I'd been labouring under the false memory that it was made out of a hotdog for years, until I saw a picture of it the other day and realised it was actually a cut-open pop bottle tied to a sausage-shaped balloon. I can see how I made my error. The other chipmunk cartoon of my childhood was Alvin & The Chipmunks, based off the novelty musical act of the same name, and I utterly detested it. Possibly the only cartoon I hated more was Doug. As such, chipmunks, inobtrusive as they are, will always be tainted for me.

Verdict: 4/10. Pleasant stripes, but the grating whinge of those awful cartoon characters will always append "♬and Theodore!♬ to any thought I ever have about chipmunks. 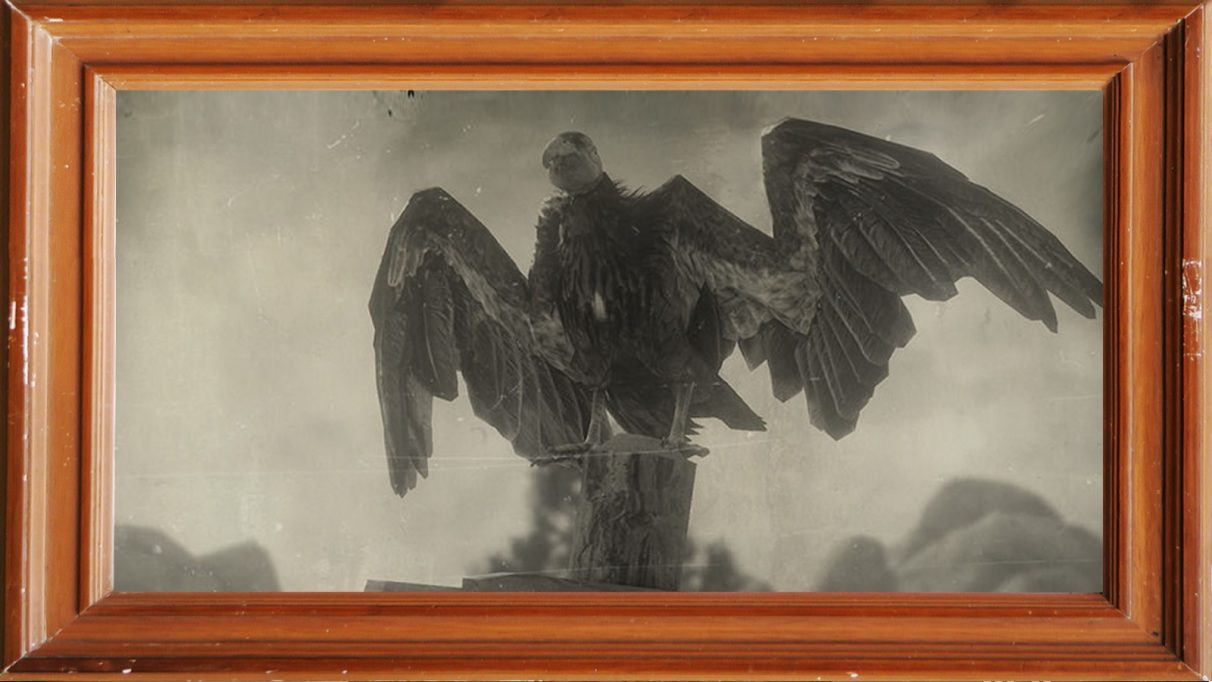 I love condors. First of all cos they sound a bit like "Gondor", the realm off of Lord Of The Rings led by the depressed tomato man. But also because they're enormous. The Andean Condor, going by a combined measurement of weight and wingspan, is the biggest flying bird in the world, and while the Californian Condor isn't quite as humongous, it's got a head like a necromancer's ballsack, and you've got to respect that. It's another conservation success story, too - it became extinct in the wild in 1987 (probably because of cowboys roasting them for no reason), but has since been reintroduced across much of its natural range, and is doing alright.

Verdict: 7/10. They probably smell dreadful, but I wish them well. 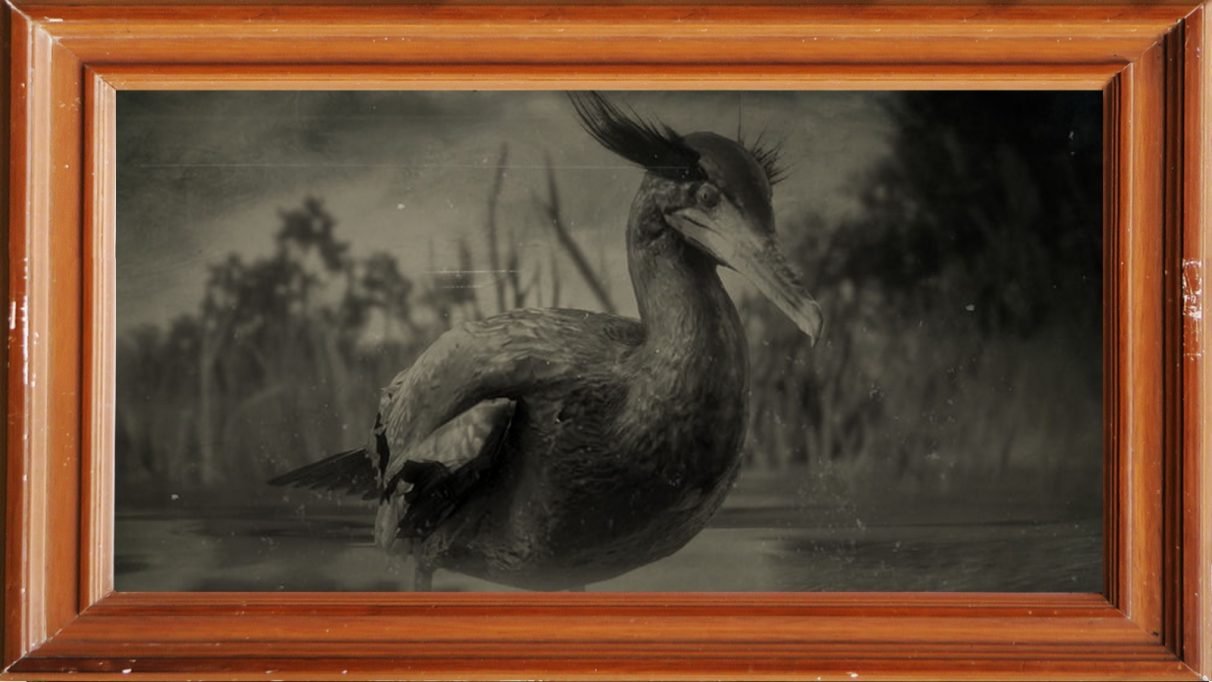 Oh, la-di-fuckin'-da. One crest not good enough for you, then? Nature abhors a show-off. Still, I can't be too harsh, because it looks like it's the mad-scientist-and/or-local-clergyman character in a pixar film about waterbirds. Hmm, that'd be quite good actually, wouldn't it? It'd be called "Fowl Manners" or something, and it'd have all the birds living in a kind of Jane-Austen-type regency setting, having balls and afternoon tea and that, until everything's disrupted by a bunch of owls showing up and behaving like complete shits. Doing wees in the ballroom, and coughing up pellets on the fancy chaise longues. Being crepuscular. That sort of stuff. Dunno how it would all resolve, you'll have to work it out for yourself. Oh, an actual fact about cormorants (normal ones at least, not sure about DCCs) - they were domesticated long ago by Chinese fishermen, who'd send them diving after the fish they crave, but put rings round their necks so they couldn't swallow them. Mean! But it's OK, cos I think they'd give them a nice eel afterwards as a treat.

Verdict: 6/10. Oh Mister Crestworth, whatever shall we do about these frightful owls! 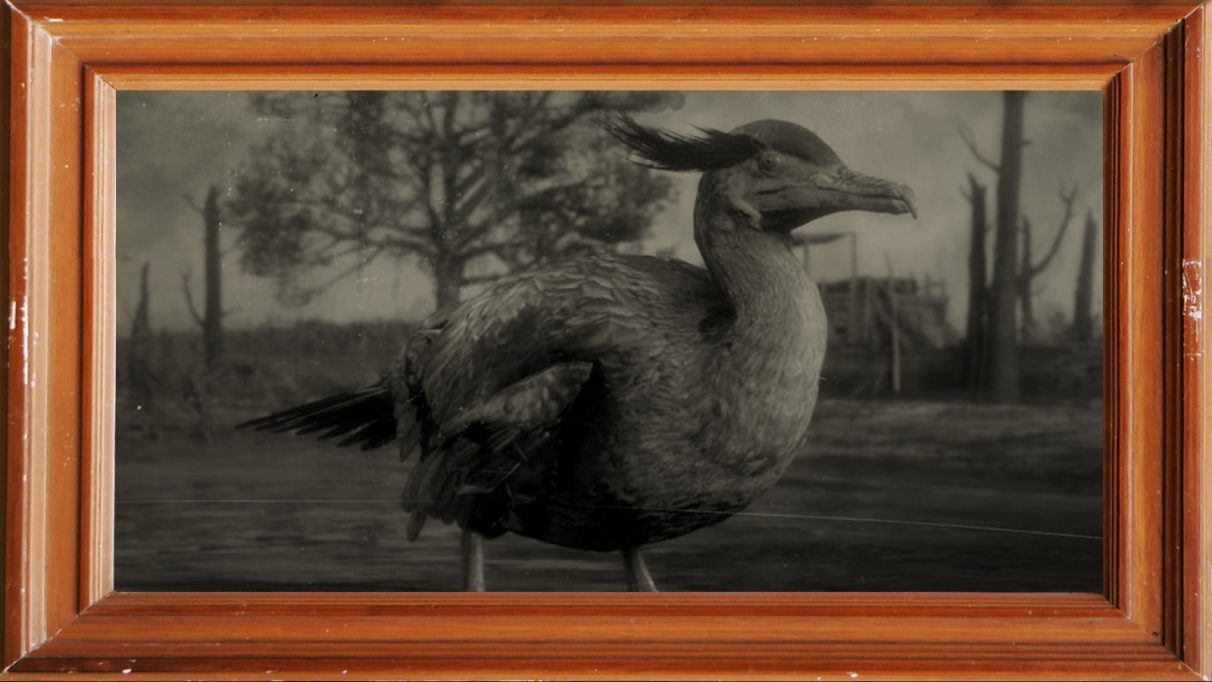 This is one of those animals that leads me to wonder exactly what Rockstar were playing at with RDR2's bestiary. There's only one type of crab (the best animal) in the game, but there's two cormorants? And call me a cynic, but they look almost identical. In fact, unless my reference materials are bungled, they are literally identical, although maybe with different colours that I can't see cos the almanac photos are all in black and white (or sepia, I guess). Even if they are a different colour, that's just a palette swap, not a whole new animal. It's exactly the same as when you come across the skeletons you had to fight on the first level, but they're now red and slightly tougher. I suppose I should give you a fact about them, so here you go, courtesy of wikipedia: they lay "up to five chalky, bluish-white eggs."

Verdict: 5/10. One for every potential chalky, bluish-white egg. 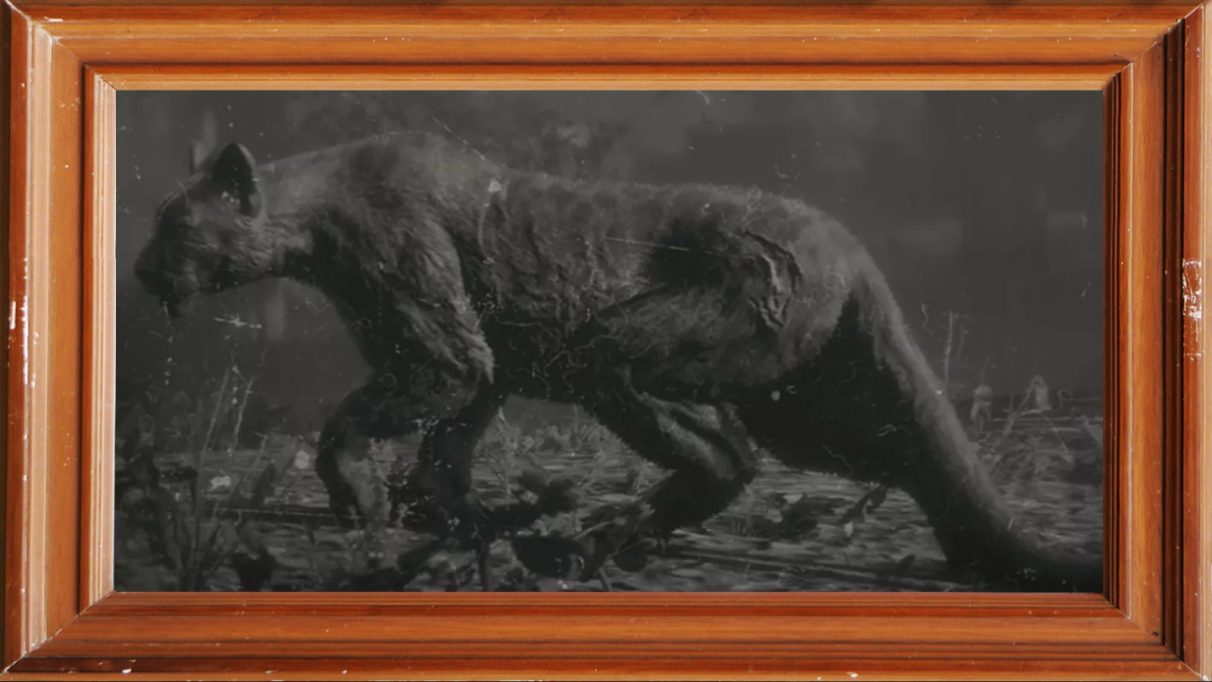 Good lord, the cougar. This animal is responsible for what is, genuinely, one of the most frightening moments I've ever experienced in a video game. And luckily, I caught it on camera, during the "nature watching" stream that inspired this series of posts. Have a watch, and enjoy the moment where I genuinely lose my mind with shock:

Video courtesy of my pal Mark, who edits all my cowboy material - there's more where that came from.

Verdict: 10/10. More frightening than The Predator. 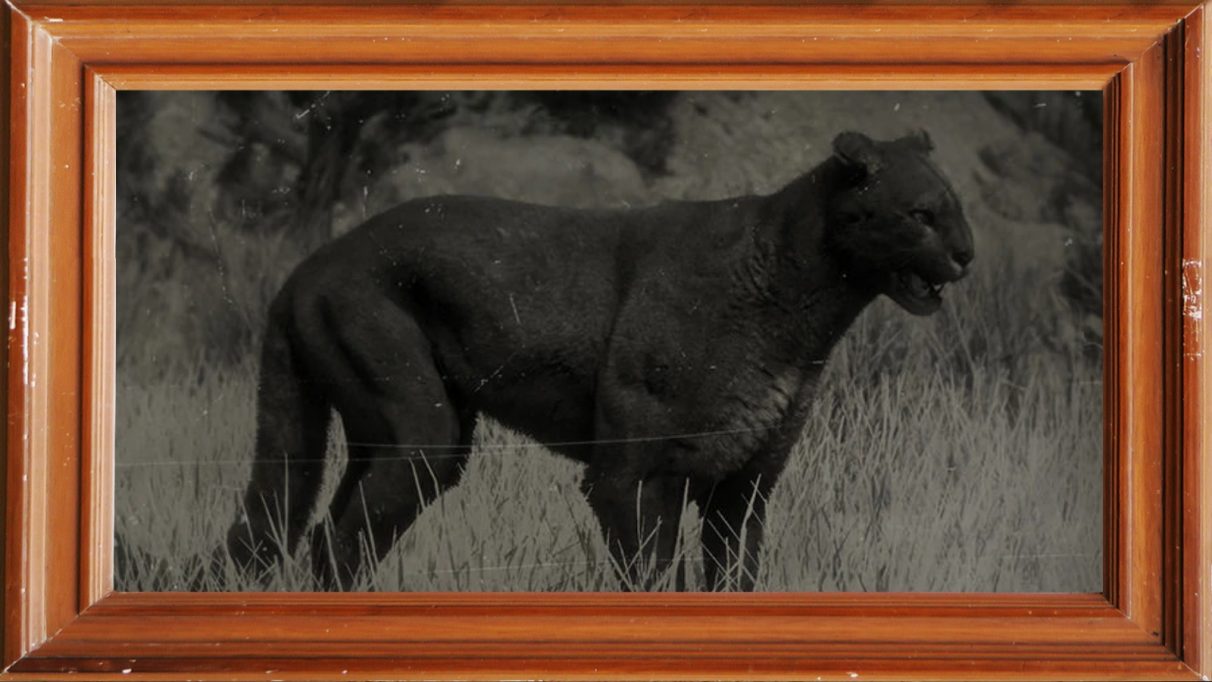 OK, we've covered the actual substance of cougars now, so I'll pick up a refrain from the first post in this series and have a brief whinge about how annoying it is that so many animals have names that double up as Sex Words. In this case, older women who like to do sex on younger men. I mean, I get the metaphor, but it's quite off-putting, really? Cos if I met a lady who described herself as a cougar, I'd just think of a sort of horrible budget lion with breath like year-old dog food, chewing the arteries out of my neck as I quietly attempt to enjoy some corned beef. But I suppose I've only got RDR2 to thank for that. As a tangent, thinking about cougars (the lady kind), I've just come up with an idea for a reality show called The Unreal Housewives Of Orange County, about a group of glamorous middle-aged women who decide to become Unreal Tournament esports pros. How good would that be?

Verdict: 7/10. Pretty underwhelming, as legendary animals go. Unless it did something really cool I've forgotten. 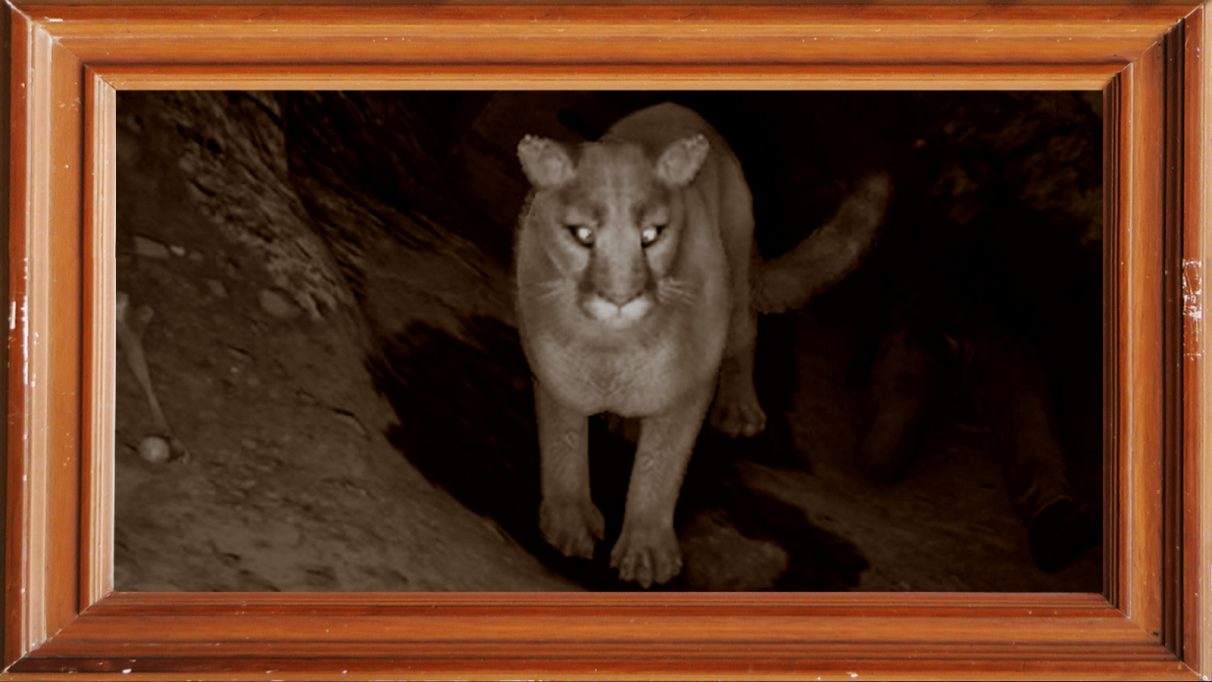 Huh, just remembered another really cracking bit of mountain lion horror in RDR2, come to think of it. You get sent to either hunt this thing, or track down the people who were hunting it, and needless to say you end up deep in a horrid cave, where you find their mauled bodies, right before the lights go out and you hear a vile mrowly noise. The following game of cat & cowboy is brutally tense, and I felt an ecstatic mix of relief and triumph when I finally binned the big cat. Honestly, this should have been the legendary cougar.

Verdict: 9/10. Still not capable of inflicting as much horror as the bog standard variety, but a hell of a set piece nonetheless.

Right, I'm going to call it there for today I reckon, but there's more corkers coming up (INCLUDING THE CRAB). Until next time, have fun, and be careful when trying to enjoy a nice tin of beef.