If you click on a link and make a purchase we may receive a small commission. Read our editorial policy.
Developer: Porpentine
Publisher: PorpentineRelease: Out now
On: Windows
From: Itch.io
For: Name your own price

For the purposes of brevity I’m going to refer to Porpentine’s new game as “Almanac”, rather than its full title of “Almanac of Girlswampwar Territory & The _girls Who Swim As Fertilizer Through The Warm Soil Cloaking The Roots of The Glorious Tree of Eugenics”. But just so you know, that is the full title of this weird lil' adventure romp.

Having never played one of Porpentine’s games before (I know I know, I’m a bad person), I had no idea what to expect going into Almanac. At first glance, it’s a simple 2D game that’s accessible by design but completely mind-boggling in narrative. In my first foray into Girlswampwar territory I simply wandered the world a little, enjoyed the brilliant soundtrack, bumped into some folk with troublesome throat sacs and caught a whole bunch of diseases with little idea of where I was or what I was doing.

Almanac makes a great showing of the Bitsy game editor; software that encourages those of us with extremely limited coding ability to create small text-driven games by making simple 8x8 pixel avatars, sprites, items, tiles, etc. and dropping them onto a canvas. You can even create really simple animations without knowing a darned thing. Even I can make a room in it, which says a lot about how basic we’re talking here. 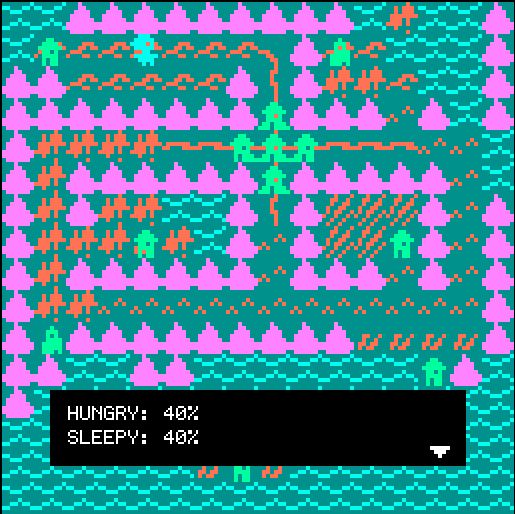 That said, this kind of simplicity and ease-of-use comes with some extreme limitations. Almanac, for example, features a silent protagonist who simply bonks into folks to talk to them. There’s no dialogue options to choose from, no crazy effects, just the absolute bare bones. Imagine Pokemon Red/Blue but your interactions with the world are limited to walking into things and reading. And all the Pokemon are desolate, diseased people with terrible burdens that can neither be caught, nor fought. Okay, so the Pokemon comparison isn’t a good one.

That said, Porpentine’s work is remarkable because of how much emotion she’s crammed into this restrictive format. I’ve died a few dozen times now - from either exhaustion or hunger, the two resources you need to manage in order to explore - and I’ve come to understand the world a little. I have an idea of where certain towns lie and what’s there, who’s got work to give me, who’s got diseases instead. There’s even a chance that, when characters mention, say, someone else’s bleak misfortunes, I might have actually met the person they’re talking about before.

The towns all feel unique. with the help of a brilliant soundtrack and carefully designed tiles and layouts. There’s an unsettling farmstead, a grim underground mining town, and a gambling town replete with raves and bad urinals, to mention but a few of the quirky little places on offer. Wherever I wind up, though, it’s almost always been affected by war, the preachings of eugenics, or the _girls who are targeted by these horrors. 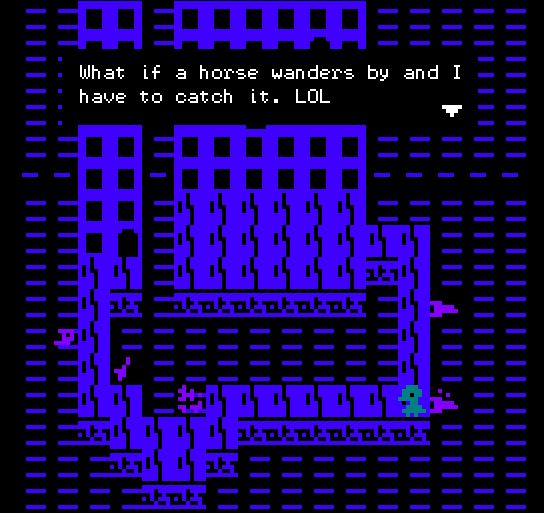 The _girls seem to be girls who have grown into, or fused with, other animals/foods/plants/machines/whatever else. There are a lot of characters with strong opinions on them; that they’re sexually aggressive, disease-riddled, or just “being silly”. Bugponies in particular seem to get a real hard time - people like to eat them, have sex with them, kill them... I’m still exploring, so there’s a lot I don’t know about this whole side of the world, but rest assured that it feels depressing, confusing, saddening and bleak. Prejudice and poverty are rife throughout the Girlswampwar world. In fact, you’ll find yourself begging for money until it becomes just another way of living.

Regardless of where you go, though, the characters you meet will be the highlight of your travels. The writing in Almanac is great - every character has interesting dialogue delivered in a way that’s personal but still befitting of the wonky world they live in. It’s weird, sure, but not so much so as to be off-putting, and there’s lots of variation between characters. Some may say they’re waiting: that their home has been destroyed by the army and their loved ones killed, and now they’re just sitting amongst the rubble, waiting. But others might just want you to STOP STANDING ON THEIR HEAD, which is fair. 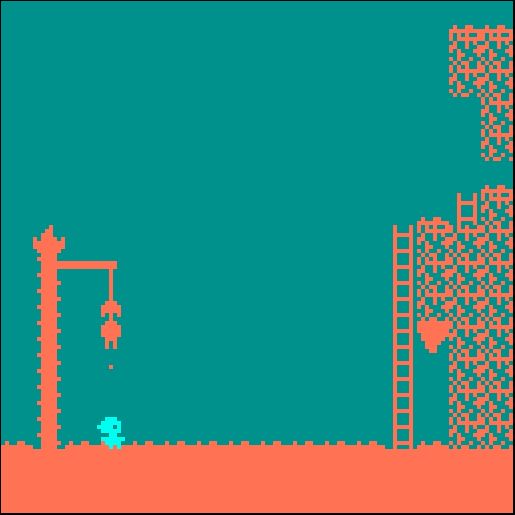 There’s still a few things I want to explore, and that’s where the accompanying Almanac PDF is now coming in handy. I played without having read it at first and had literally no idea what, for instance, the moon was up to. It’s one of a handful of mysteries buried within the game, but thankfully, one of the few that becomes somewhat clearer with the guidance of the PDF. For example, every day/night cycle, the “eye moon” changes and sometimes this has an effect on your game. A solid slice of wisdom straight from the Almanac: “The Hornet Eye: It is said that foot travel is extra exhausting under the gaze of this eye.” It’s even got some fictional commentary from the creators of the game included, but I don’t want to go so far as to spoil anything more here.

If all of this isn’t enough, there’s the Dark Triad, their Demon Tarot cards and what I can only think to describe as some kind of mad hardcore Yu-Gi-Oh match where if you lose you die (this is mostly conveyed through the commentary of match announcers that you can bump into). There’s even a thing about getting more BLUE in me, which I’m still not sure I fully understand, so I guess I’ll have to go and try that next.