The AOC G2590PX is the latest version of the excellent AOC G2460PF. Now with a marginally bigger screen and a sleeker, more modern design, I was absolutely convinced this 1920x1080, 144Hz, AMD FreeSync display would be an absolute shoo-in to replace the G2460PF as one of my best gaming monitor recommendations for 2018. Sadly, it would appear my confidence was misplaced.

At first glance, the G2590PX looks every bit the upgrade the G2460PF deserves. Its boxy, plasticky bezels have now been replaced by a gorgeous edge-to-edge frame that really enhances the size of its modest 24.5in screen, its cheap-looking, clip-on cable tidy is now fully integrated into the G2590PX's newly height-adjustable stand, and its four-port USB2 hub has been beefed up with a four-port USB3 hub instead, making its somewhat irksome price increase to a not-so-budget-friendly £229 / $300 feel all the more justified.

When I turned it on, however, my heart sank. Not only was there a noticeable graininess to the G2590PX's TN panel, like its pixels were all ordered in visible columns, but I could already tell its colour accuracy wasn't going to be brilliant. Out of the box, the G2590PX had a very pale, washed out sort of pallor, and my suspicions were confirmed when I tested it with my X-Rite i1 Display Pro calibrator.

Despite measuring a very respectable peak brightness of 340cd/m2, its black level was an appalling 2.12cd/m2. Most TN panels manage somewhere in the 0.10-0.50cd/m2 region (the closer to 0.00cd/m2, the better), but this was just plain ridiculous. To make matters worse, its contrast ratio came out as a measly 160:1. 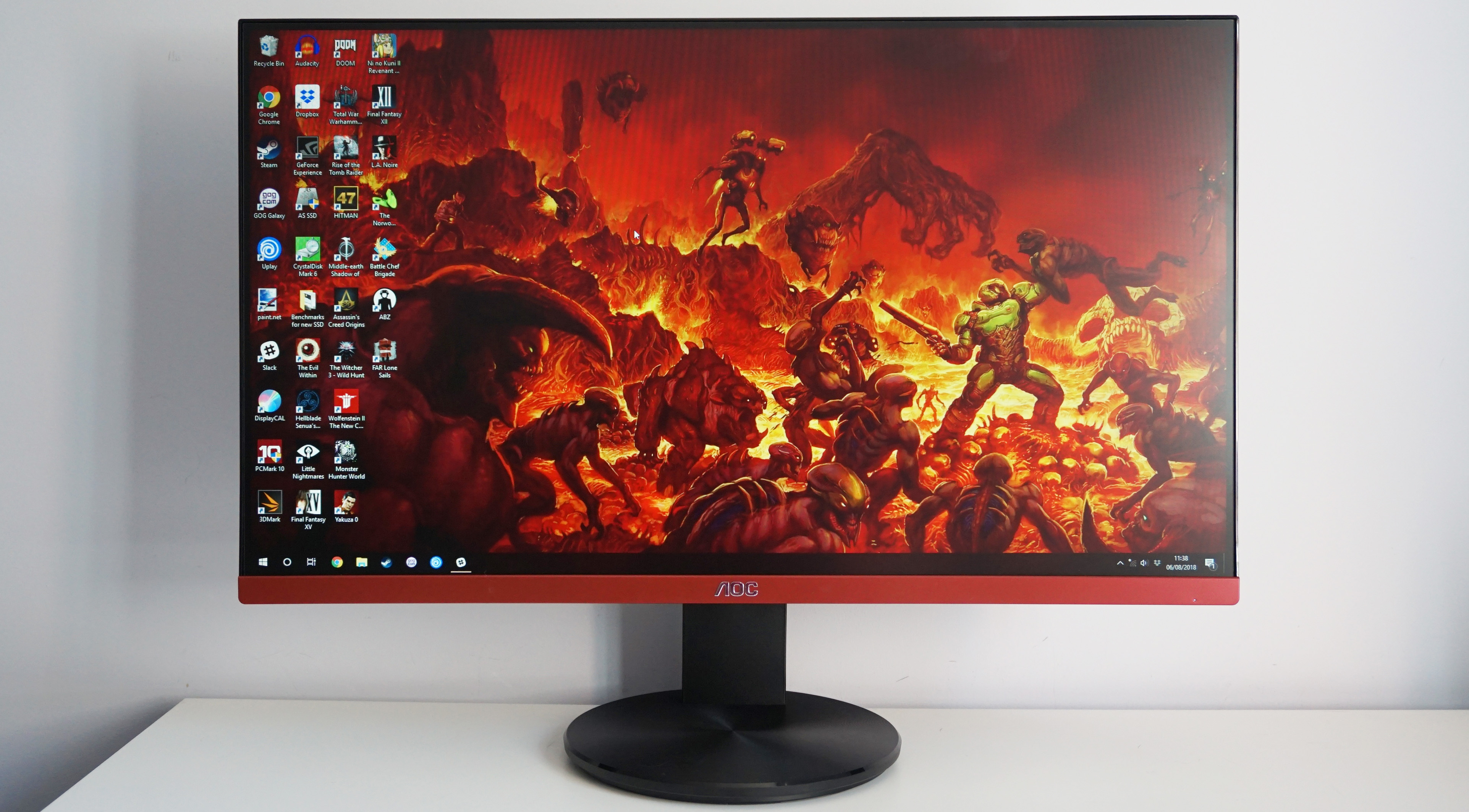 This was so far off the G2460PF's vastly superior measurements that I became convinced there must be some rogue settings at play, so I fired up the G2590PX's onboard menu system to investigate. Credit where it's due, AOC's little five-way directional control nubbin round the back is an immense improvement on trying to get your head around the G2460PF's individual buttons running along the lower bezel, but the menu's UI could still do with a much-needed spruce up to make it easier to use.

Still, I breathed a small sigh of relief when I found there were indeed some villainous game settings in place that were producing such crippling results - primarily, the monitor's Shadow Control option. Set to 50 by default, even just dropping this down to 40 saw an immediate improvement. Its black level fell to a much more respectable 0.46cd/m2, and while its maximum brightness topped out at 275cd/m2 at this setting, I'd take its improved contrast ratio of 596:1 over those extra 65cd/m2 of brightness any day of the week.

Admittedly, a contrast ratio of barely 600:1 still isn't brilliant, even by budget monitor standards, and pales in comparison to the G2460F's measurement of 906:1. A high contrast ratio is important when you're playing games, as it means you're able to see more shadow detail when a scene transitions from light to dark. If contrast is low, shadow areas just look like a big, flat, monochrome blob, devoid of depth and detail, and it makes it increasingly difficult to spot things that might be lurking there.

Case in point: the opening cutscene of Little Nightmares. That opening scene of swirling mist was reduced to clunky, distinct bands of shadow on the G2590PX, which doesn't exactly do wonders for maintaining the game's spooky atmosphere. Yes, there's always the option of raising the monitor's overall contrast, but I found anything higher than its default 50% did equal damage to its overall picture quality, making everything too bright and difficult to see.

I tried lowering the Shadow Control further to see if this improved things, but this only made the screen even dimmer and lowered the contrast ratio to 471:1. The only thing that managed to push it a little higher was changing the screen's Gamma settings - but even this only got me a maximum contrast ratio of 614:1. In short, the G2590PX's contrast is a bit pants.

I wasn't overly impressed by the G2590PX's colour accuracy either. Using the monitor's default Normal colour temperature setting with Shadow Control on 40, my i1 DisplayPro returned an sRGB colour gamut score of just 88.5%. Admittedly, this isn't awful by TN standards, but it's also nowhere near as good as the G2460PF's sRGB coverage of 95%.

I managed to pump it up a bit by switching over to the User colour temperature profile and dropping the green value by four to bring it in line with its red and blues, but I still couldn't get anything higher than an overall sRGB figure of 92.3% after I'd finished calibrating it. 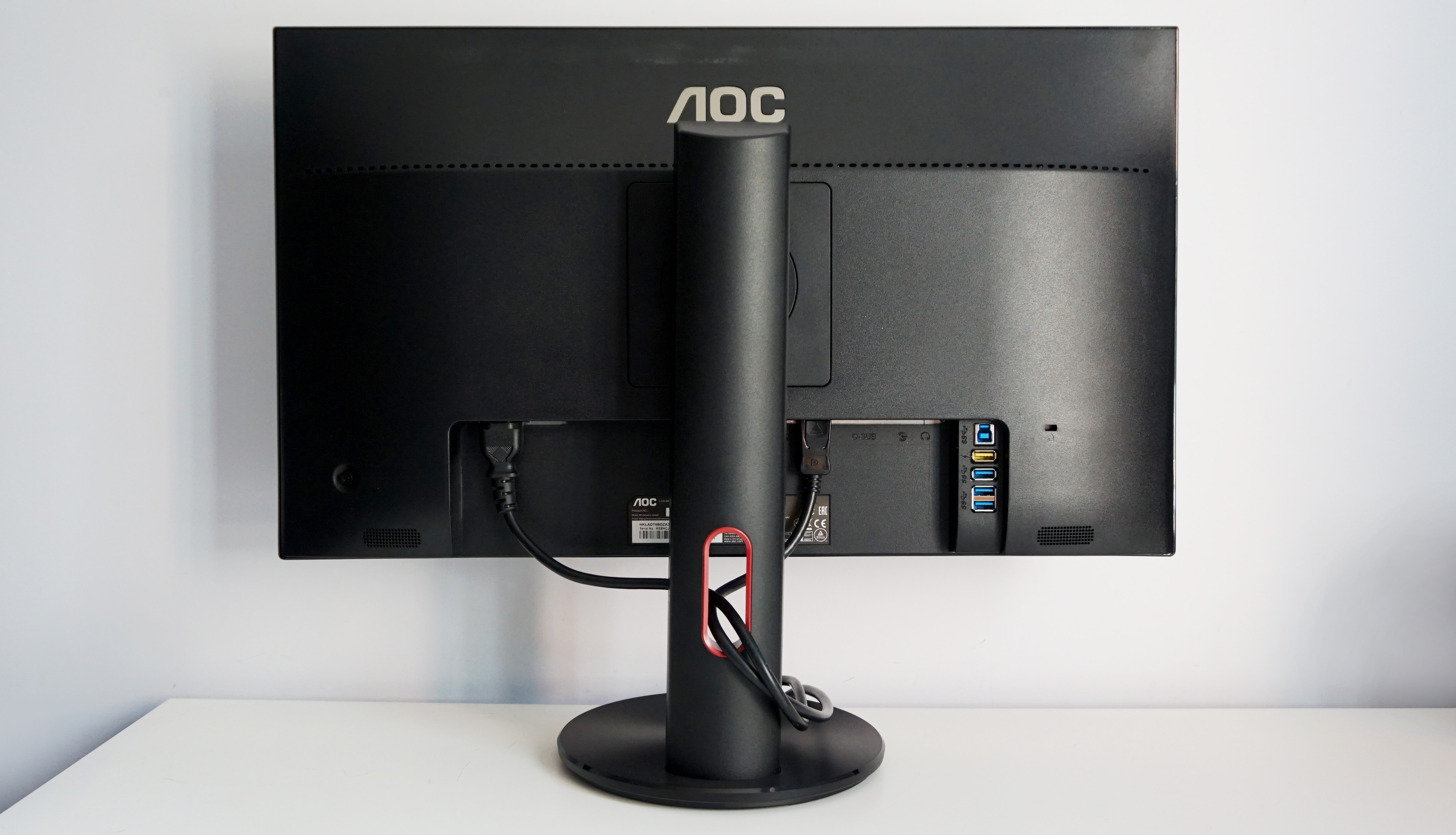 Perhaps I'm being a bit hard on the G2590PX. In the grand scheme of things, 92.3% sRGB is still pretty decent as far budget monitors go, and that gap of 3% is hardly going to make a huge difference when looking at it in the flesh. You're still getting that lovely 144Hz refresh rate for super smooth gaming as well (provided you've got a beefy enough graphics card to make the most of it at 1920x1080, of course), and those with AMD graphics cards can still take advantage of its adaptive FreeSync tech, which helps to eliminate screen-tearing by automatically adjusting the monitor's refresh rate to the number of frames being spat out by your GPU.

Indeed, if the G2590PX's contrast levels weren't so terrible, I'd be tempted to suggest this as an (almost) like-for-like replacement once the £209 / $197 G2460PF goes properly end-of-life. As it stands, though, the amount of faff it takes to get the G2590PX into a vaguely acceptable state (and even then not a pretty underwhelming one) means it ultimately falls short of that coveted recommendation. For now, hoover up those G2460PFs while you can, as they probably won't be around for very much longer.