Take one look at the AOC G2460PF’s price of £170 (at time of writing) and you’d probably think it was a pretty standard kind of display. After all, 24in Full HD monitor prices often start around the £100-200 mark, and you can find several screens around the same £170 mark that don't have anything to shout about other than a mildly adjustable stand.

AOC's G2460PF, however, is anything but ordinary, and it's one of the best gaming monitors around. Despite its low price, this monitor has a 144Hz refresh rate and AMD FreeSync support, plus a height-adjustable and rotatable stand. It's not overly garish, either, as the only concession it makes to being a so-called 'gaming monitor' is a thin red strip that runs along the lower bezel. Otherwise, you can happily put this on any kind of desk and not be embarrassed about it.

The only thing that gives its price away is the clip-on plastic cable tidy. It's not the most elegant solution compared to other monitors that have built-in cavities to thread them through the back, but I honestly don't mind when the G2460PF is so much easier to manoeuvre in the first place. With swivel, tilt, height and rotation adjustment, connecting cables to its generous array of ports (VGA, DVI-D, HDMI and DisplayPort) is an absolute cinch. You even get a four-port USB2 hub, which is pretty rare on a monitor this cheap, and separate headphone and microphone jacks, too.

Its 1920x1080 TN panel is also excellent. I was a bit worried when I first turned it on, as the sharpness seemed to be dialled up to eleven and the contrast seemed completely out of whack. Turning off the Overdrive function helped to some extent, but my high-res desktop wallpapers still looked a little compressed even after calibration. Still, I'm willing to gloss over that, as its colour accuracy was pretty much spot on straight out of the box.

TN panels usually struggle in this department compared to their IPS counterparts, but the G2460PF doesn't really require any fiddling whatsoever to get a good image. On its Standard picture profile, the only thing I had to do was switch from the Normal colour temperature to the sRGB option. With these settings, colour accuracy was excellent (95.2% of the sRGB colour gamut, if you must know), and whites were plenty bright enough to handle a multitude of different lighting environments.

As it turned out, its contrast measurement was actually lower than I was expecting (just 906:1, rather than the usual 1000:1). That said, I still saw plenty of shadow detail both in-game and in my various test images, so you won't be caught short when you're venturing through the dingy locales of games like Resident Evil VII or The Evil Within 2.

Then, of course, there's that high 144Hz refresh rate. As I've mentioned before when reviewing the Asus PG248Q and Acer XF270HUA, the higher the refresh rate, the higher the frame count can be in your favourite games, allowing you to push past the traditional 60fps mark and enter the realms of high frame rate gaming - in this case, a maximum of 144fps. You'll need a fairly decent graphics card to really get the most out of it (either that, or you'll have to dial down the graphics settings), but the result is silky smooth action that really lets your card fly at 1080p.

I admit I probably can't quite tell the difference between, say, 120fps and the full 144fps available on the G2460PF, but the difference between 120fps and 60fps is just as dramatic as the jump between 60fps and 30fps. There's a noticeable jump in the way the camera glides across the horizon, and combat in Assassin's Creed Origins, for example, just looks and feels that much more fluid and responsive.

The same goes for Doom, which has always been beautifully optimised. Ramp up the motion blur, for example, and it feels like you're tearing round its demon-packed arenas with an even madder energy than before. Combined with AMD FreeSync support that helps stabilise frame rates when they take unexpected dips, and even those with less powerful graphics cards should still be able to enjoy lag-free gaming.

The only real shortcomings of the G2460PF are its menu interface and tinny 2W speakers. The latter are passable for your typical Windows pings and whizzes, but anything more and you'll want a pair of headphones. The menu, on the other hand, is pretty much the same on every AOC monitor I've ever tested. It's simple enough to use, but the button layout takes a little getting used to. 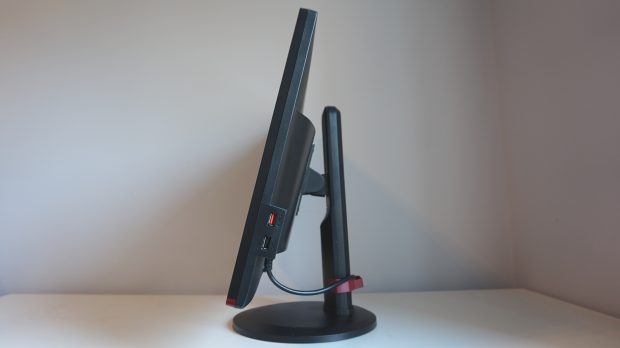 All in all, the G2460PF is a pretty great little monitor, and arguably one of the best budget buys I've seen all year. Nvidia card owners needn't fret, either, as there's an identical, albeit slightly more expensive, G-Sync version as well - the G2460PG, which costs around £320 from Scan.

This, AOC has assured me, has exactly the same kind of panel as the G2460PF, so you can expect near identical image quality between the two models. The only real difference is that the G2460PG only has a DisplayPort connector, rather than the more generous range of ports on offer with its PF counterpart.

In either case, both are much cheaper than the Asus PG248Q, which currently costs around £400, and they both produce a much better picture, making them my 24in monitor of choice (so far) for high frame rate gaming. If you want a bigger display, on the other hand, then I'd still recommend saving up for the £500 Acer XF270HUA.