The Evil Within 2 begins by wearing its heart on its sleeve; here’s a burning house, and oh no, the protagonist’s daughter is inside it. From the outset, it yells in your face that this is going to be a Tragic Dad story, the most beloved of videogame narrative tropes. And it never really rises above this familiar narrative conceit as Sebastian Castellanos explores a horror world filled with bad science and twisted terrors in pursuit of his kidnapped daughter. It’s predictable. In other hands, it could’ve been trite. But The Evil Within 2 revels in its horror b-movieness. It embraces it, telling a surprisingly heartfelt and sincere tale of a man who just wants the best for his loved ones. Even if he has to descend into actual hell and face off against some of the most hideous monsters ever conceived in order to achieve this.

While The Evil Within 2’s overall plot may be nothing surprising, the devil’s in the details here. The level of environmental and visual storytelling is fantastic. The town of Union, a fictional construct created to achieve perfect human hivemind unity, is crumbling and corrupting under the weight of the evil within (of course). As you traverse the game’s hub worlds and self contained levels, small narrative strands play out; here’s a woman escaping from a horde of Lost (the game’s zombie cyphers) who has a strange tale to tell about how she got here. There’s an empty house, clues to the missing occupant’s fate left behind in both the layout and the various Resonance points that give you flashback style insight into what went on. Details like this litter the game, providing subtle narrative development to the player without ramming it down your throat via exposition. 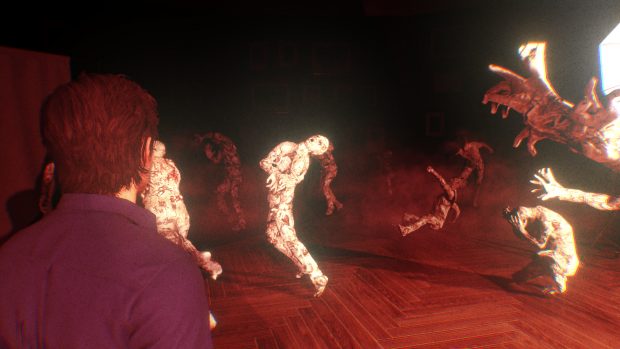 While the environment of Union tells an interesting story, it’s the enemies in The Evil Within 2 that provide the most interesting narrative meat. The aforementioned Lost are corrupted denizens of Union, their flesh rupturing and weeping, their appearances changing depending on the area of Union in which they met their demise. Then there’s the other, more significant creatures. The Guardian, who you meet early on, is a powerhouse of feminine anger, a three-headed monstrosity wielding a giant buzzsaw. She’s a creation of the game’s first act villain, an art school reject who uses the imaginary nature of Union to create a living art project celebrating the beauty of death and dismemberment.

Then there’s my personal favourite creature design, the Obscura. She’s a gangly multi-limbed beast with a camera as a head. Every time she takes a step, something in the construction of her body causes her to sexually stimulate herself. So you’re there, trapped in a makeshift darkroom lit by seedy red lights, pursued by a camera-headed woman-thing who orgasms as she scuttles after you, her naked flesh quivering in anticipation for the kill. There’s no overt backstory to Obscura. She’s a creation of the villain, reflecting his vision of art and beauty, something which the game does explore. A psychosexual horror that plays on fears unspoken, turning the game’s fairly simplistic plot into a much deeper, more interesting piece of horror fiction. 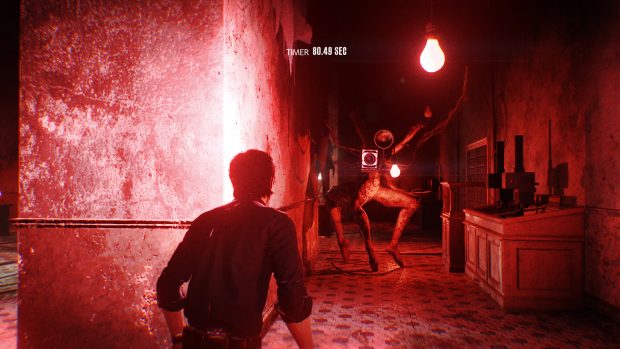 If The Evil Within was a spiritual successor to Resident Evil, then The Evil Within 2 is Tango Gameworks’ answer to Silent Hills being canned. Union isn’t exactly open world, but it features various sections of the town in which you’re free to explore, meeting up with NPCs, doing side quests and scavenging for supplies. Scavenging is key here; like the best survival horror games, you’re presented with very little in the way of ammo or healing items, but unlike some of its forebears, The Evil Within 2 provides plenty of means to go off the beaten track and strengthen your arsenal. It’s a nice balance; the more time you invest into exploring Union, the easier time you’ll have, but at the trade-off of taking risks by venturing into some of the more dangerous areas you could otherwise ignore. An early example involves heading away from the core objective to find parts to fix a sniper rifle. Once at the location, a shrieking acid-dripping Lament stands guard; if she sees you, her scream will summon five or six Lost. There’s a chance you’ll come away worse off than when you started, but if you’re careful, mastering the game’s stealth mechanics, you can end up equipped with a sniper rifle and no worse the wear for it. 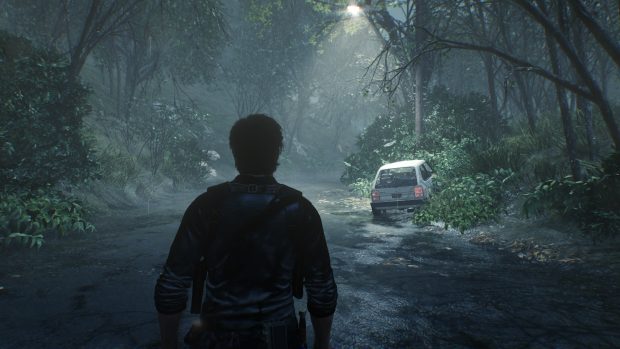 While the game does allow you to play more aggressively, especially on Casual difficulty (which really lives up to its name, if you want an easy ride then Casual lets you basically play as Robocop), playing on Survival or higher is predominantly designed around stealth. I’m not the biggest fan of stealth games, honestly, but The Evil Within 2 offers a fantastic, tense stealth system that leads to some extremely scary moments. The cover system, used here for sneaking rather than combat, is fluid and simple, with Sebastian easily able to pop into cover and circle around enemies, tiptoeing along walls and boxes as foes flail around screaming at any noticed movement.

Further stealth abilities (alongside health, combat, etc.) can be upgraded via an upgrade tree, allowing you to kill from behind cover, sprint in for stealth kills, walk more softly, and so on. It was in pouring points into these upgrade paths that I found the most enjoyable way to play. By sneaking through Union’s open streets, taking down Lost before they saw me, avoiding some of the game’s tougher enemies, The Evil Within 2 provided an especially tense horror experience. 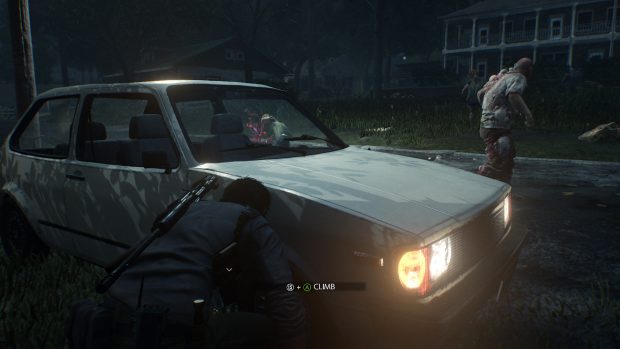 The audio design really contributes to this, too. Enemies let out grunts, rasps and moans which can be heard echoing down corridors and around vast, darkened rooms. Learning the audio cues of each enemy type, I could feel my heart begin to race every time I heard the pained clicking of a knife-wielding Hysteric, or the telltale tapping of the Obscura’s feet. While the visual design is fantastic, the audio design is especially masterful, again turning what could’ve been a generic survival horror title into something especially memorable.

Sometimes though, as stealthy as you’re being, you’re forced to fight, and it’s here that the game slightly dips in quality. While I enjoyed the combat a lot, it can be a little cheap at times; enemies have brief invincibility frames after you shoot them, and occasionally a bullet that should’ve caused damage simply does nothing. It’s far from regular, but on a couple of occasions it was the difference between felling a Lost or taking damage. Likewise, checkpoints are occasionally thoughtlessly placed, with deaths leading to a restart back through a few empty rooms or a cutscene rather than at the beginning of a section with enemies. Checkpoints differ based on difficulty, and it feels like a few of them on Survival anyway weren’t planned that well. Thankfully, in the free-roaming hub sections, retreating to a Safe Room is fairly easy, allowing you to save and heal by drinking coffee. 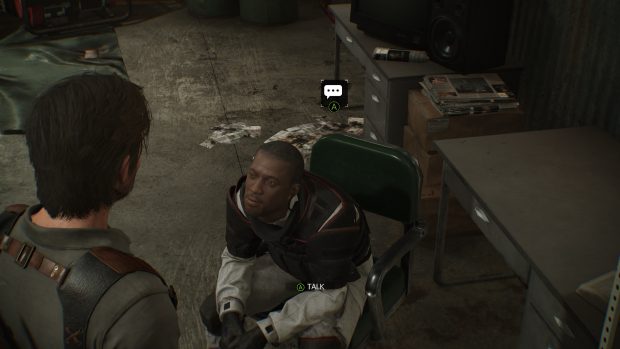 The Evil Within 2 is a fairly long game in theory, particularly if you do all the side missions, which are pretty beneficial. Normally with survival horror games I feel like they’re outstaying their welcome after about 12 hours, but I was hooked on The Evil Within 2 for the 30+ hours I spent playing it, and I’m even about 5-6 hours into an NG+ playthrough, something I almost never start immediately after finishing a game once. If you do want a leaner playthrough, it’s perfectly possible to either play on Casual or avoid the optional objectives on Survival or beyond, which will make the game harder but also provide a more streamlined experience. Personally, I found the most joy in The Evil Within 2’s marginalia and minutiae though, with some of the scariest moments coming from unscripted encounters I had while exploring off the beaten track in an effort to find more gunpowder to craft ammo or weapon parts to upgrade my guns. 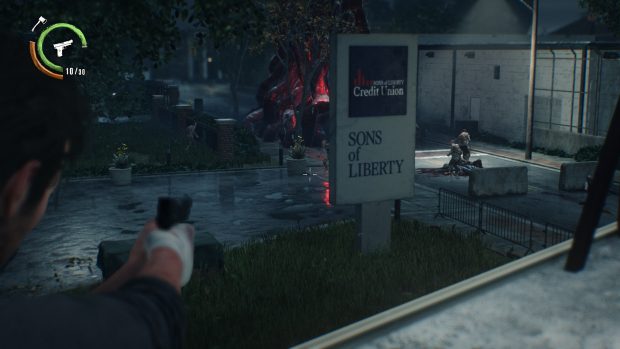 The Evil Within 2 feels like something of a departure from the first game, but also an extremely fitting follow-up. Its structure, enemy design, immaculate audio production and constant tension make it one of my favourite survival horror experiences to date, and while it doesn’t push the envelope in terms of providing anything new, it focuses on what it is and attempts to provide a definitive, well-produced classic survival horror experience. It succeeds at this on basically all counts, with the minor combat quibbles doing little to dull the overall experience. The town of Union is one I’ll be happy to revisit regularly, even if the citizens are a little... hostile to outsiders.