If you click on a link and make a purchase we may receive a small commission. Read our editorial policy.
Developer: Studio Wildcard, Instinct Games, Efecto Studios, Virtual Basement LLC
Publisher: Studio Wildcard

I’ve built an army of inflatable flesh bags that puff themselves up to three times their normal size and then launch into the air like oversized, leaky balloons. They’re called Gasbags, and they’re my favourite dinosaur in Extinction, the latest expansion to Ark: Survival Evolved. Whenever I don’t fancy aimlessly floating around on the back of one, I can load any metal I’ve collected into their giant inventories and puff my way back to base. They’re brilliant.

Extinction’s new creatures are some of the best in Ark so far: alongside the Gasbags you’ll find new friends including the lumbering, sloth-like Gacha, which drop semi-randomised loot from giant crystals on their back, a teleporting robotic raptor/spider hybrid called an Enforcer, and a Velonasaur, which can fan out its facial fins to transform into a walking machine gun that shoots quills, shredding armour in seconds.

Extinction brings Ark back to Earth and aims to put a bow around the lore that players have uncovered in the base game and other DLCs. It all begins in Sanctuary, a futuristic city in ruins that lies at the centre of the map. Skyscrapers loom over multi-level highways and plazas full of ponds and bridges. All the while, scout drones—another new addition—beep and bloop overhead, alerting the Enforcers to any trouble. 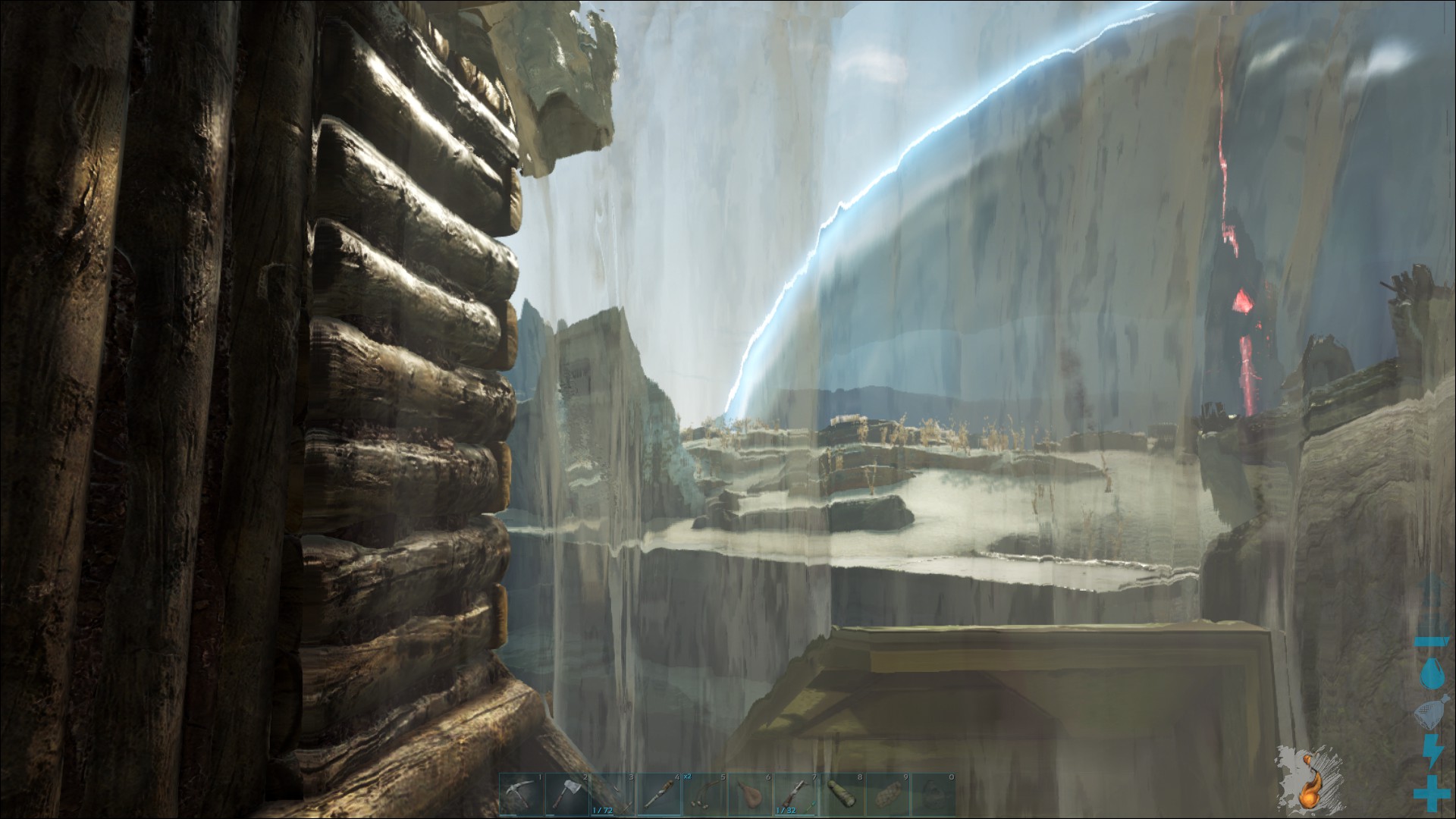 I couldn’t wait to explore when I first woke up there, and within minutes I found a nook underneath the lip of a waterfall that was just about big enough for a starter base. In the distance I could see a giant dome and an obelisk, marking the location of one of Extinction’s mini-boss Titans. It was an idyllic spot.

But within a few hours, I was bored of the city. You can’t go inside any of those tall buildings, which makes it feel empty, and it’s mostly a maze of repeated grey walkways. I know it’s meant to be a destroyed version of Earth, but I wish it had more signs of its former life than just lamp posts, benches and signs.

You’ll soon want to venture out, and that means entering the Wasteland that surrounds Sanctuary. You’ll need to go through it to reach any of the other major biomes and the dinos that wander them. 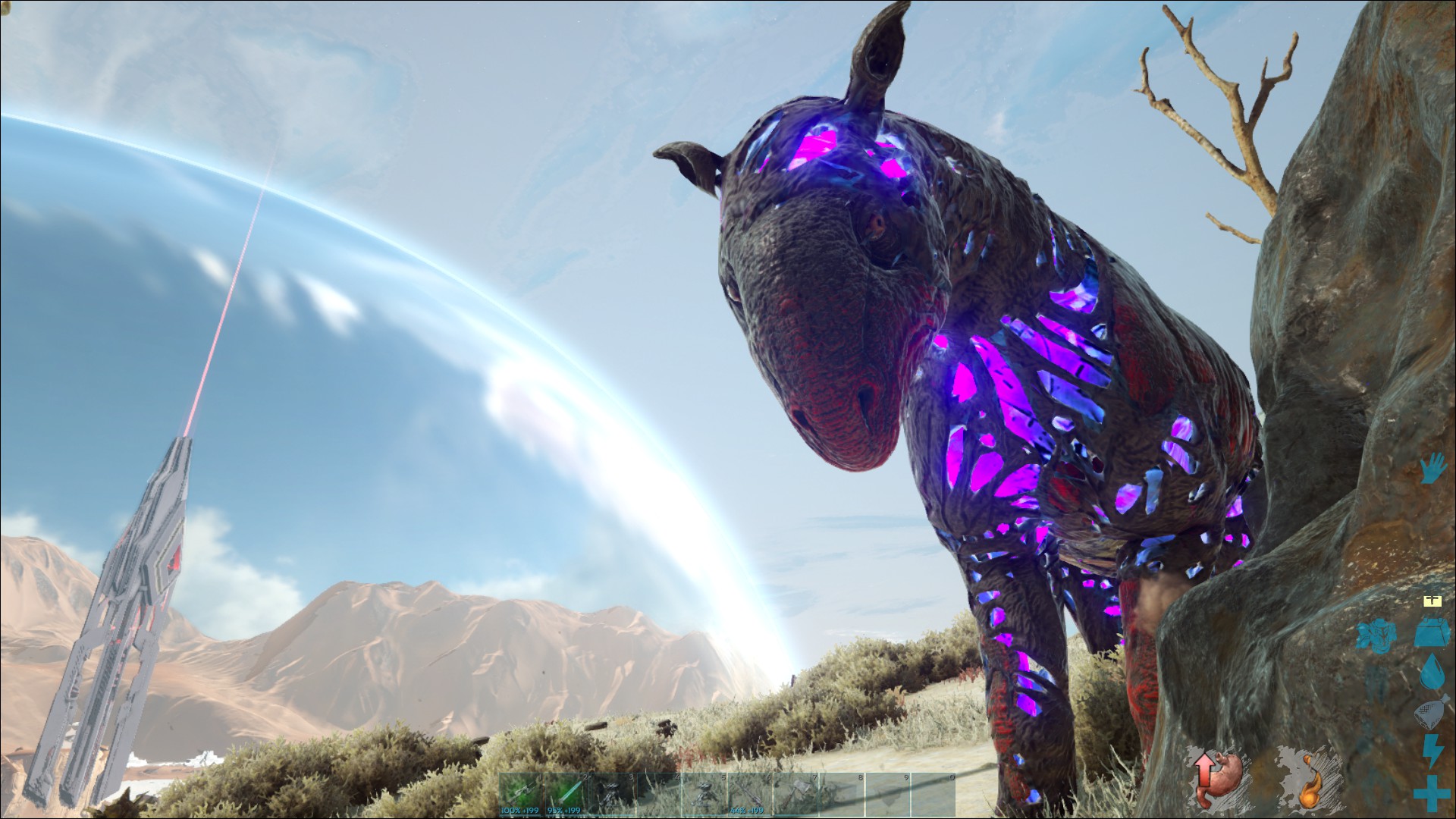 The Wasteland is too tough for my taste. Corrupted dinos—untameable, always-aggressive versions of existing Ark dinosaurs—frequently spawn in packs that will constantly harass you. The Wasteland is generally a flat and uninspiring place, but even when you find a nice vista you don’t have a safe second to drink it in. And don’t bother building a base, because corrupted creatures can destroy any materials up to and including metal. It’s an all-round nightmare for new players looking to get a foothold in the world—and there’s no way to avoid it if you want to explore.

Orbital Supply Drops are the Wasteland’s one saving grace: they’re pods that fall from the sky and house high-level loot. When activated, they’ll spawn waves of corrupted dinos, and you’ll only get the goodies inside if you clear them all. It’s virtually impossible to do solo, and you’ll need an organised group with decent gear if you want to stand a chance. Fending off waves of enemies is frantic, and encourages creative use of your tames: players more clever than I have stacked Velonasaurs on top of a platform being carried by a flying Quetzal to make an unstoppable gunship. 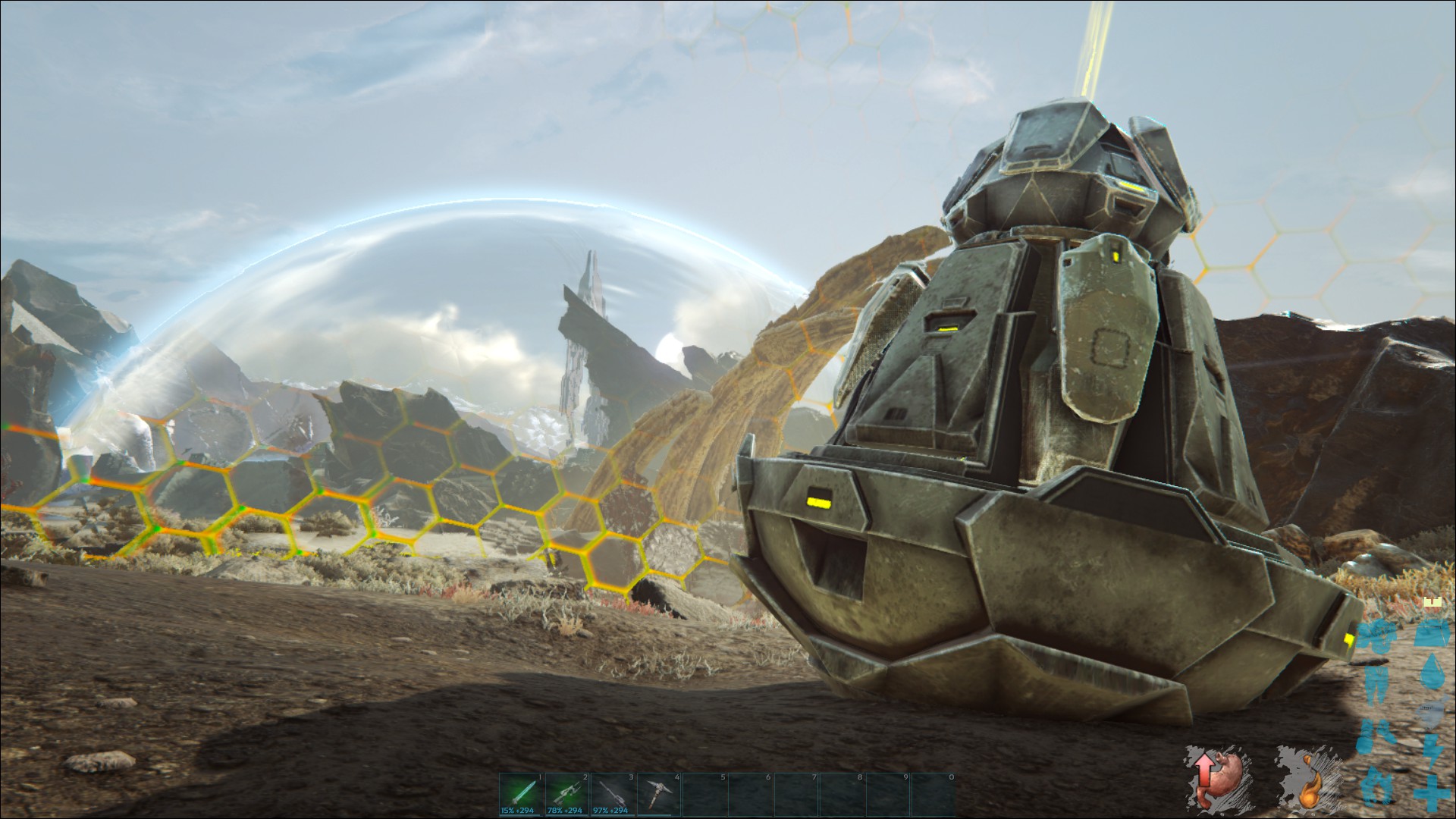 If you survive the Wasteland you’ll find other themed areas including a desert and a snowy biome, both housed in domes that have their own climate. I like how they look on the horizon, but inside they’re devoid of fresh ideas. Ark already has both snowy and sandy areas in older maps, and Extinction’s feel like they have fewer crannies to explore—the only caves house the mini-boss Titans, and they’re very late-game. Once you’ve spent an hour in one of these domes, you’ve seen most of what they can offer.

It’s the same story in the forest in the top-left corner of the map. It’s my favourite place to fly around, and the thick, ancient tree trunks just keep going down and down into the earth, through vast caverns with underground lakes. Along with my waterfall base in Sanctuary, I’ve set on a grassy outcrop overlooking a tranquil pool, with nothing but my Gachas for company. But after I was over the initial sense of wonder, it too started feeling empty, with few useful resources and a distinct lack of dinos (apart from beavers—there are loads of them). 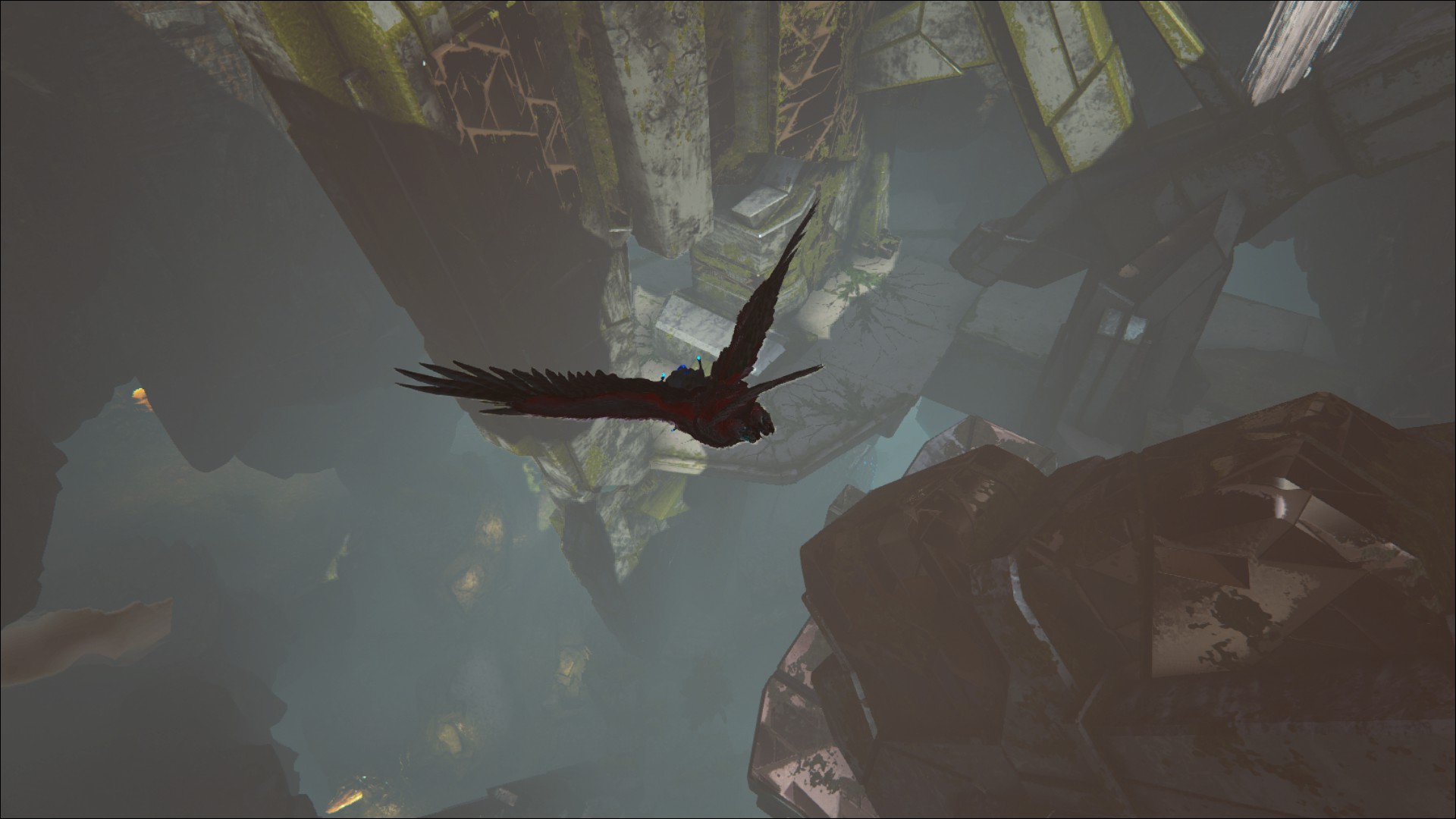 It’s a real shame: if the world were more exciting, Extinction would be a must-buy. I’m a fan of the natural sense of progression that it creates through its mini-boss Titans. To spawn them, you have to activate nodes within caves, themselves filled with high level creatures baying for blood. Most players, I suspect, won’t beat a Titan without cheating—but I like that you always have something to aspire to. Defeat all the Titans and you can face the game’s final boss. You can even tame the Titans temporarily—and yes, that means Titan vs Titan, tribe vs tribe wars are a very real possibility.

And—it’s worth emphasising again—the new dinos are terrific, and I don’t mind that there are fewer unique creatures than previous expansions. The Enforcer, which you craft from material rather than tame like a normal dinosaur, has become my favourite mobile mount in Ark: it can blink a short distance forward to bridge gaps, and it can climb up any wall. When I got my first one, I spent a good half hour just jumping from building to building in Sanctuary, enjoying the smooth animations.

But even if you can look past Extinction’s shoddy map, the range of bugs and glitches still present a week after its release are a reason to at least hold off a purchase. I’ve fallen through the map twice, seen a consistent, flickering lighting glitch in the desert biome, and experienced multiple crashes to desktop.

I’ve not even had the worst of it: a patch a few days ago completely wiped out the bases of some players, and developer Studio Wildcard’s solution was to increase the harvest rate for materials, which isn’t much consolation. Extinction was also supposed to have meteors that rained from the sky—but they’ve been disabled for now because they were falling in the wrong parts of the map. I’ve come to expect Ark to be rough around the edges, but Extinction feels like it could’ve done with at least a few more weeks of testing.

The strength of its new dinos will pull me back now and again, if only to float around aimlessly on my favourite Gasbag. But as the last of the planned expansions for Ark, Extinction is far from the swan song that I was hoping for.