From a publisher as huge as Ubisoft, and in a series as chart-dominating as Assassin’s Creed's Discovery Tour represents an unusual and welcome ambition. The mode, available as free DLC for Assassin’s Creed Origins or as a standalone game, strips out all the combat, levelling-up and collectibles in favour of a promised educational experience. It takes the strongest facet of Origins – its detailed and enormous depiction of Ancient Egypt – and adapts it into something almost entirely new.

Ubisoft isn’t alone in remixing its games in this way, however. The Discovery mode for Origins follows in the squelchy footsteps of Frictional’s Soma, which added a ‘Safe Mode’ last December that removes any mechanical threat from its monsters. Traditionally, the concept of ‘games’ has been closely tied with that of ‘challenge’, but these modes sidestep that. And in doing so, they remove a barrier to entry for less experienced players who want to explore their worlds. Even if the execution doesn't necessarily match the idea, this is a good thing.

As John has already pointed out, Discovery Tour has flaws when considered as an educational tool. A lot of its tours involve standing in one place, listening to an audio description, and then trying not to accidentally walk over the next point of interest. That pushes against the natural interactivity of the game rather than embracing it to find new modes of discovery and learning. But as a way of freeing Origins from its level-based gating, from Ubisoft’s trademark collectormania, and from the concept of challenge itself, it’s a fascinating experiment. Everything is immediately accessible, so you can start up the game and be parkouring off the side of the Great Pyramid within minutes. 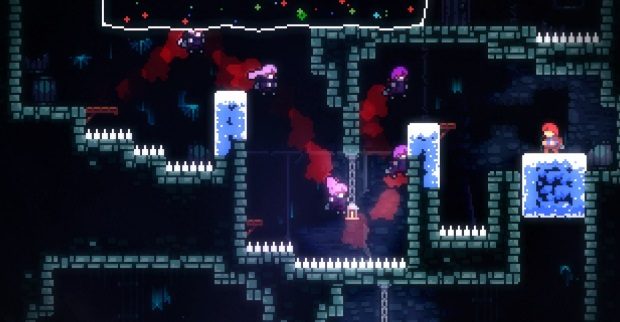 It might seem like an odd comparison, but playing Discovery Tour brought to mind another recent game which experimented with accessibility: Matt Makes Games’ brilliant pixel platformer Celeste. Its Assist Mode goes well beyond the standard ‘easy’ setting, by letting players change aspects of the difficulty on the fly. From the pause menu, you can slow the game speed, boost your ability to double-jump in the air, or just make yourself outright invincible – and then drop straight back into playing.

There’s a shared sense of generosity here. We’re used to games locking off content, something that everything from loot crates to timed unlocks have capitalised on, but these modes are a way of attempting to ensure that no one misses out. The aim is to allow everyone access to all of a game’s world, sights and story, regardless of skill level.

Which brings us back to Discovery Tour. It’s best enjoyed by ditching the stuffy lectures and treating it as self-directed study, making the most of the options available to you.

Want to follow the tour guide? Great – but maybe you’d rather sneak off and explore the nooks and crannies of these cities, without fear of reprisal from guards. Or go on a fast-travel tour of all the key locations. Or grab your virtual camera and get up close and personal with some of Egypt’s animal inhabitants.

After finishing my first guided tour, I immediately opted for the latter. Switching my character to Julius Caesar, I headed off to find some lions to bother. It’s not particularly educational, seeing history’s leading laurel-wearer snapping a selfie with the local Mufasa (#venividiyolo), but it is funny, and it brings a different kind of pleasure to Origins. That said, once the novelty wore off, it became apparent that some of the majesty of these beasts had been lost along with the threat.

Instead of trying to eat you, predators will just ignore you completely. As does everyone else.

That's because Ubisoft have taken the quickest route to keeping the player safe, by making them practically invisible to the rest of the world. You start to feel like a time-travelling ghost, albeit one who can shove people over if you run into them hard enough. 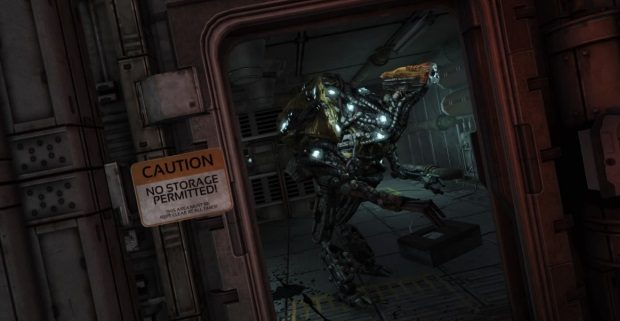 This is a problem which Soma’s Safe Mode tries to tackle head-on. According to Thomas Grip, Frictional Games’ creative director: “We don’t simply turn off the creature’s ability to attack and harm you. Instead, we’ve redesigned their behaviour. Our goal has been for Safe Mode to not feel like a cheat, but for it to be a genuine way of experiencing the game. So we’ve considered what each creature should be doing, given their appearance, sound, and voice.”

That redesigned behaviour doesn't prevent you from strolling up to a monster and staring it straight in the biomechanical eye. Knowing that they've been declawed does mean that treating them as a threat or as fearsome requires a certain amount of buy-in from the player.

It’s just another type of roleplay, though, and Soma works hard to make its monsters scary regardless of what they can or can’t do to you. The Giger-esque designs are grotesque enough that you don’t need much mechanical encouragement to look – and run – away from them. Plus, the monsters’ swollen forms are considerably more inscrutable than a person or animal in Ancient Egypt, which helps maintain the illusion. 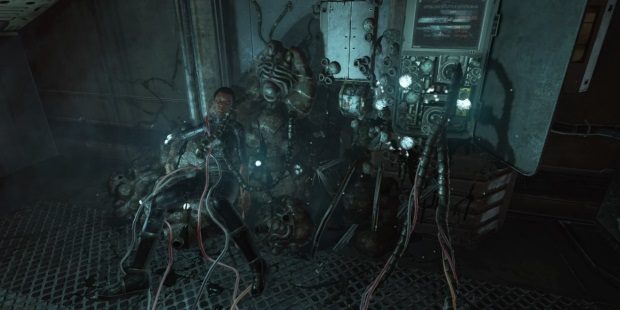 Even when the curtain falls, because you accidentally ran into a monster that you didn't realise was there, Soma has plenty of other hooks to pull you through its story. The mysteries of its plot and the details of its world have always been the game's core strengths and Safe Mode serves to open them up to players, like myself, who would be too scared to explore otherwise.

It’s probably telling that this mode was inspired by an existing Soma mod called ‘Wuss Mode’. Not just because the name perfectly describes my approach to horror games, but because these modes are the kind of thing that the modding community has been doing for decades. Taking one game and building another that uses the same assets but with different rules has given us everything from DOTA to Day Z.

Safe Mode tweaks one major rule – how the monsters behave – and that shunts Soma’s genre a little further into sci-fi than horror. From stealth game to walking simulator. But at its core, it’s a variation on the same experience. In this regard, its ambitions are minor next to the towering obelisk of Discovery Tour.

Ubisoft is trying to build an entire separate game out of Assassin’s Creed Origins. It’s not treating the mode as a sideshow – Discovery Tour sits right there on the start menu next to the main campaign, the two coexisting as options just as they do in the same virtual world.

It’s not a completely successful experiment and it quickly becomes obvious that Origins’ Egypt wasn’t designed to be intrinsically interesting as a place to explore without purpose, or enemies. With no objective to guide you, or resistance to hold you back, moving through this space isn’t completely satisfying, and reaching a new location feels like less of a reward.

Nonetheless, I’m grateful that Discovery Tour and Safe Mode exist. They feel like first steps, beyond the idea of an easy mode – even one as comprehensive as Celeste’s – to a different way of opening up games to people who might not otherwise be able, or willing, to play them.