You're climbing a mountain. It's hard, especially when the wind is cutting through you like a knife and angry spikes are pulsing from the walls. Sometimes you're not even sure if the mountain is actually a metaphor for every difficult thing you've ever done in your life. That's how much trouble you're having getting to the peak.

That is my brief summary of Celeste, a game that has flung me into the abyss hundreds of times, battered me into submission, and placed me in predicaments that are as unnerving as they are challenging. It's a tricky platform game, with a beautifully melancholy story, and enough creativity on show to give me strength even when the going got so tough I almost lost hope.

I won't presume to know what your personal high-bar for platformer perfection is. You might be a Mario person and if so, we can probably find common ground in the inventive wonders of the Galaxy games. Maybe Super Meat Boy is your clotted jam, in which case let's share a quick high five because, yes, I believe it's a reflex-test of fine quality and superb design. You might even want to branch out into something more story-based like the excellent Owlboy. Good choice; I'm with you. 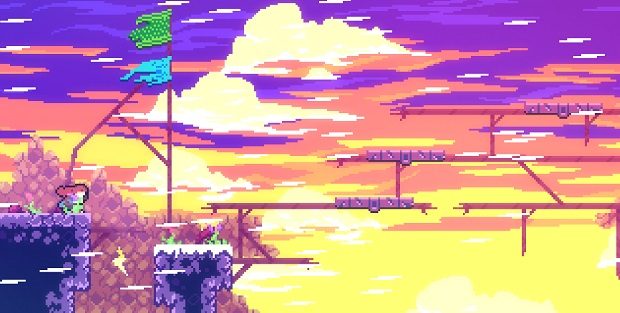 The good news is that whichever camp you fall into, Celeste is almost certainly going to hit the spot. I'd expected something like a modernised Ice Climber, since mountain-climbing is the theme, but although it never loses sight of the slopes, plateaus and peaks, Celeste is much more than a snow-bound game about going up instead of going right.

You can run, you can jump, you can grab a wall and climb, and you can dash in the air - a multi-directional form of the double-jump. Each movement is exquisitely animated, and your hair changes colour to let you know whether the dash is charged, but you're not getting any more powers. That's your lot. 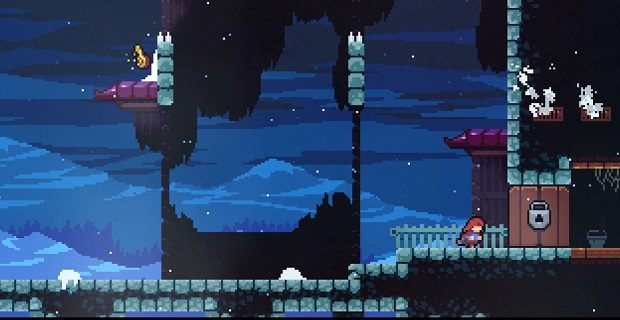 Instead, every new chapter introduces fresh ideas built into the levels themselves in a way that might make Yoshiaki Koizumi applaud. Instead of unlocking abilities, you're always fighting with or against environmental hazards, from strong winds to mirror worlds and deadly, spikey corruption that grows underfoot and underhand. The windy levels in particular offer the kind of Meat Boy-like high-intensity dodging and weaving that requires steady nerves and an ability to complete a sequence of jumps, grabs and dashes without a single mistake.

And the story that holds everything together feels almost jarringly honest in its depiction of ennui, wanderlust and anxiety. It's not a game with the kind of plot twists that could necessarily be spoiled, but the way the emotional core is exposed as the journey becomes more brutal and unforgiving is pitched astonishingly well. I'm reluctant to say too much more on that front but for those keeping count, this is another game that brought a tear to my eye. 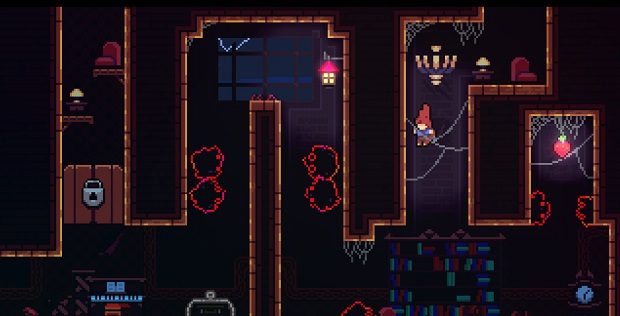 Not because it's a tragic game, though there is a deep sadness on the mountain, but because the conversations teeter between despair and hope in a way that rings entirely true to me.

There are only a few characters to chat with along the way. A couple of them live on the mountain, one of them is a fellow explorer with a completely different outlook on life and a different set of goals. He's mostly about self-discovery and selfies, whereas your character, Madeline, seems like she's driven by steely determination at first – simply wanting to go somewhere that seems impossible – but reveals other motivations during the ascent.

Most of the time, the story takes a backseat, with conversations happening at breaks between levels or at intervals during them. I never lost sight of it though, even when I was close to losing my patience as I died for the twentieth or thirtieth time while trying to traverse a particular set of obstacles. In that way, I found the story genuinely inspirational, pushing through my platformer pain barrier because I wanted Madeline to succeed, and because I wanted to see what became of her.

I desperately wanted a happy ending.

Eventually, I decided that if I were even going to have a shot at any kind of ending that didn't involve giving up and walking away, I might need a little help. That's convenient because I really want to say something about the way this exceedingly difficult game provides so much assistance and support that I never feel like I've been abandoned in the cold. There are many wonderful things about Celeste but its attitude toward the challenge it presents is the one that most impressed me.

How do you make a game easier when it already provides infinite lives and extremely generous checkpointing? There's no combat so it'd be impossible to tweak enemy numbers or strength, though there are a couple of chase sequences that could perhaps provide struggling players with an extra hit-point. It's a sticky problem.

You can choose to slow everything down if that'll help, which will be of particular use to those who struggle with sequences that require lots of button presses and changes of direction in quick succession. You can make Madeline invincible so that spikes and other hazards pass right through her. You can have infinite stamina so you can hang onto the side of a wall forever without losing your grip. You can increase the number of air dashes at your disposal, effectively allowing Madeline to take flight. You can even skip entire chapters, useful if a particular mechanic introduced in one area is giving you loads of bother.

It's a great way to make the game more accessible and there's absolutely no judgement involved. I'm using Assist Mode on my second playthrough to find all the collectibles. They're strawberries and that seems to me like a very fine thing to collect. Early on, a postcard on a loading screen informed me that the strawberries aren't important; don't feel pressured to collect them, it said. It's fine. But it might be fun to grab them all if you want a tougher challenge!

Another example from another postcard: “Be proud of your death count. The more you die, the more you're learning.” 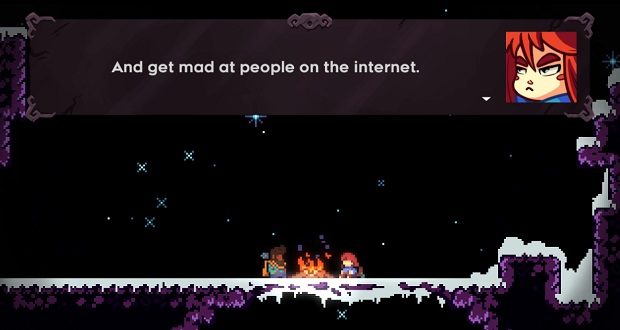 This is a game with tight controls, intricately designed levels full of clever tricks and traps, and a heartfelt story that reflects on and engages with issues of emotional and mental wellbeing. I've not even mentioned the music, which is some of the best I've ever heard in a game. Delicate, sorrowful and then, suddenly, EXCITING as the pace demands.

It took me almost eight hours to complete and apart from some mild frustrations in one of the final worlds, which felt like it had more wild goose chases and dead-ends than the rest of the game combined, I enjoyed every minute. The more I think about it, the more the events of the narrative seem beautifully intertwined with the messages about difficulty and the Assist Mode.

Celeste is a difficult game about overcoming difficulties. Come for the challenge, stay for the joy of Madeline's company and the generosity of this wonderful game.

Celeste is available now for Windows, Mac and Linux, via Steam and Itch for $19.99.